Welcome to Geeky Wedding Wednesday! Be here the first Wednesday of every month to learn how to geek out your wedding! This week, Harry Potter!

Bring joy to the 11-year-old in all your guests by sending out invitations in the likeness of Hogwarts letters. Aged parchment, calligraphy and wax seals will do the trick. And instead of using that weird tissue paper thing, throw in some owl feathers so they’ll know who really delivered their invite. 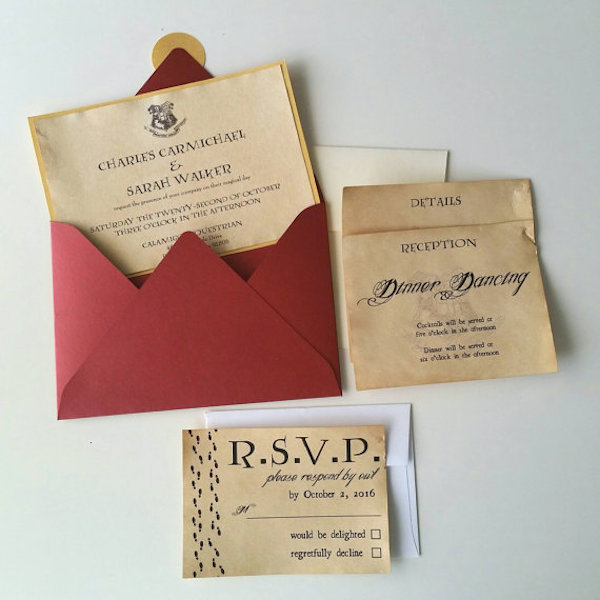 Probably the most iconic dress in the series is Hermione’s Yule Ball gown and there are some wedding dresses out there that look a bit similar to it. 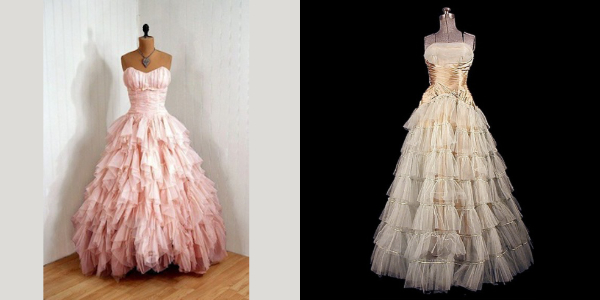 Grooms could go with a standard black suit but add on a dress robe for the occasion. Seriously. It’s a thing. It’s on runways. 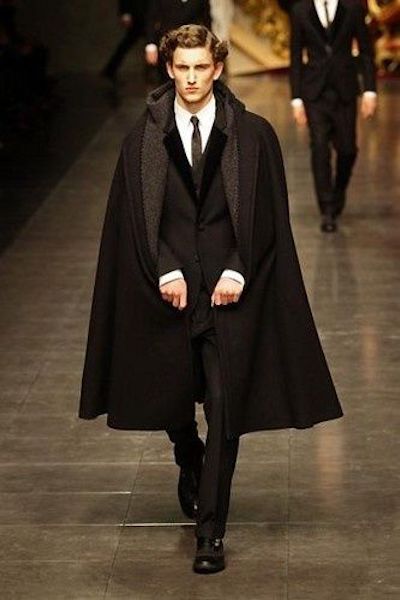 I dig the idea of having the bridal party get sorted and then wear dresses and ties based on their house colors. If you have two people in the same house, have them each choose one of the house colors so you can mix things up. Bridesmaids can wear the same style or fabric of dress in their colors, while groomsmen can wear black suits like the groom, but with the proper solid house color tie or bow tie.

And a special note for a potential guest wardrobe request. Ask everyone to wear bright yellow and/or sun colors, Lovegood style.

Horcrux accessories all over the bridal party! Hear me out! 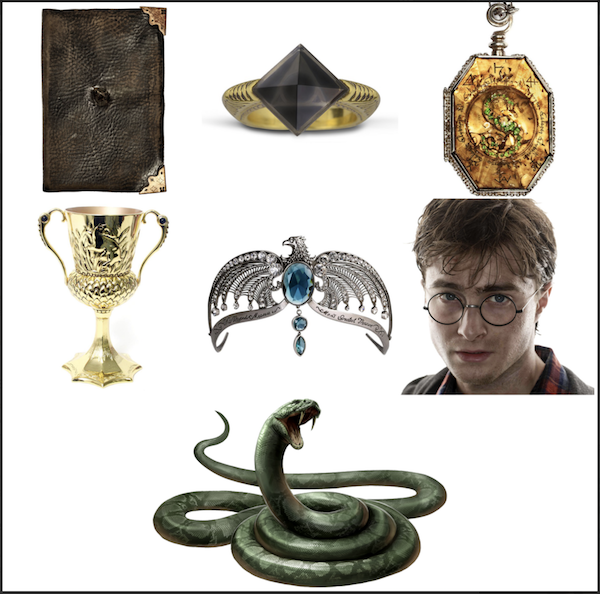 You can find necklaces made in its likeness for the bride to wear like the one below by LadyGypsyJewelry on Etsy. You could also get an actual tiara replica and have the flower girl rock it down the aisle. 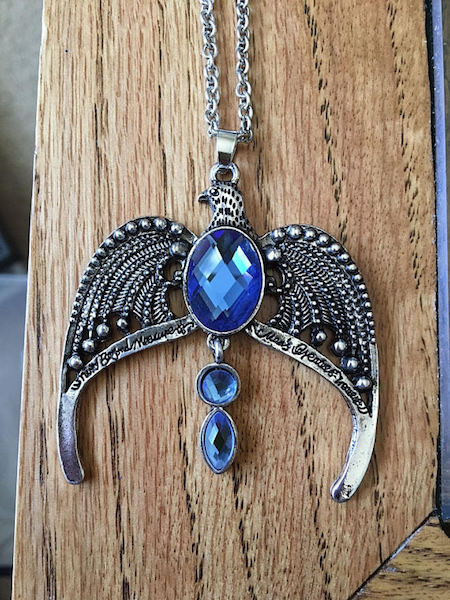 Whoever your officiant is should carry any notes, vows or readings, in a leather folio replica of the diary.

Well, you can’t wear a cup like this so it should be used in a unity ceremony instead. Like pouring sand or lighting a candle or both drinking from the cup together. Lots of unity options!

Take inspiration from this horcrux and give each bridesmaid a locket as a bridal party gift. Instead of an “S” on the front, customize it with each girl’s monogram. You can add a photo of the two of you inside as well.

Cufflinks! Get the men in the wedding cufflinks in the likeness of the ring with smoky quartz stones. Something like this: 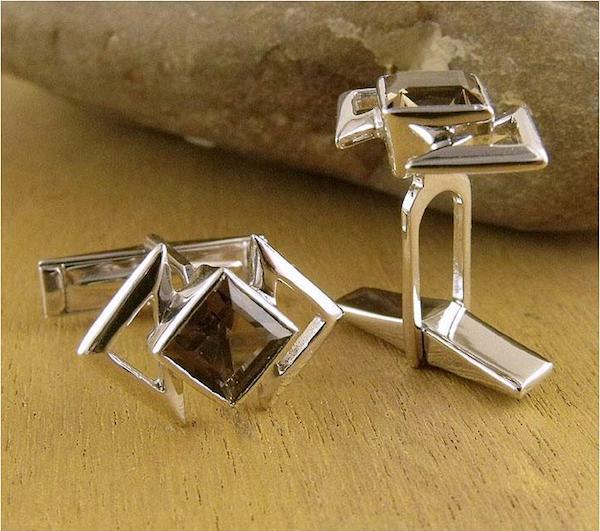 So you might not want actual snakes (maybe you do…to each their own!), but what about snake-like hair accessories? There’s one by MetalArtSpace on Etsy that doesn’t look spot-on scaly and would be perfectly elegant for the bridesmaids. 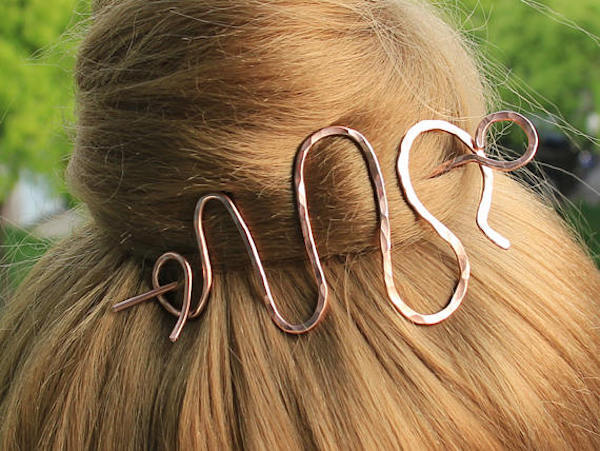 What’s your ring bearer up to? Yeah, gotta do it. Don’t feel like you have to give the kid a full costume (although that would be cool), but at least some fake glasses and maybe even a scar would be great. And then he could carry the rings in a snitch…in his mouth…or something.

I mean, lilies…right? Well you should anyway. And probably not petunias…but ya know, whatever.

Outside of pulling house colors and such, I love the idea of using book pages to make paper flowers for the bouquets and boutonnieres. These things will also become lovely keepsakes from your wedding.

It’s impossible not to use the music from the movies. There are many great options to choose from so pick some of your faves and go nuts for the ceremony.

You could always kick off the reception with a little “Potter Waltz” (the song to start off the Yule Ball), but then bring in some HP dance music like some of the parody songs by American rock band, Harry and the Potters or Ministry of Magic.

Not quite music, but sound effects can play a part at the reception. See if you can have owl sounds playing throughout the night near the tables. Get a recording of Moaning Myrtle for the restrooms. It all depends on what’s possible with the sound system available.

Lighting will play a big part here. Absolutely use floating candles if at all possible. You can also place candles stuck into clear, glass stands on top of mirrors to create a slight floating effect. We also see a lot of pumpkins throughout the books and movies, mostly thanks to Hagrid. Even if they’re not in season, you can use faux pumpkins to add a pop of color to your tablescapes.

It might sound weird, but bring back those owl feathers from the invites to make it look like the reception is filled with flying companions. Think of them as confetti for the centerpieces, guest book table, etc.

One of the coolest cakes I’ve seen for Harry Potter themed weddings is one based on the Triwizard Cup. 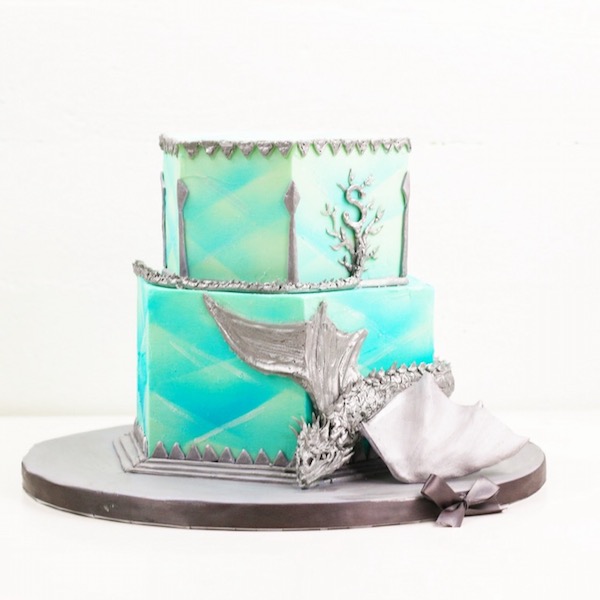 That’s definitely an advanced cake and not for everyone so for something a bit simpler, pull inspiration from things like the Marauder’s Map and give the cake an aged parchment look. That way you can write quotes or messages on the cake or even replicate the map and add in the bridal party names and footprints like they’re actually in it.

For cake toppers, use silhouettes or figures of the emblematic animal of your respective houses. You could also do the same thing but use each person’s patronus instead. Extra points if you have a mini bottle of Amortentia sitting between the two figures. 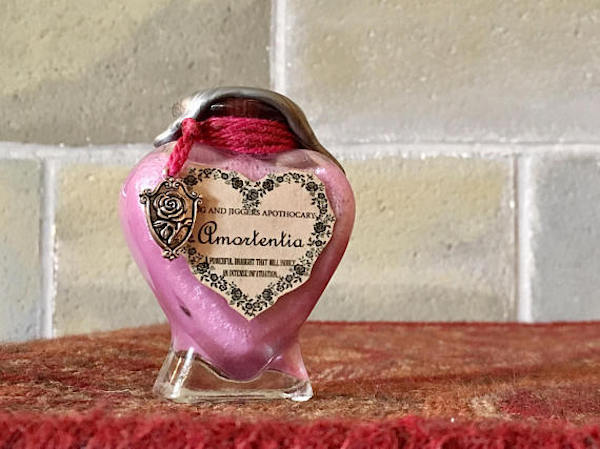 Clearly whoever got married on September 3, 2014 totally nailed it (see what I did there?) but that doesn’t mean you still can’t.

If you happen to live in an area with mild weather year-round, have your nuptials with a side of birthday by getting married on July 31st, the day Harry was born. Of course, you could really choose any favorite character and honor them by using their birthday as your wedding date, but by using Harry’s birthday you’re also using JK’s birthday so…

Plus, the only wedding we attend in the wizarding world is Bill and Fleur’s and they got married on August 1st. Which is basically the same day so I guess all signs point to the end of July.

Candy stations are always popular for favors because guests can interact with the station and choose what they want in particular. So put a twist on this by having a Honeyduke’s candy station! It can get pricey to go all out buying the “actual” candies from the Universal parks so try doing a mix of DIY and pre-made candies for the table.

-Regular variety Jelly Belly candies or the Bamboozled variation with a mix of tasty beans and icky flavors.

-Make your own with this recipe.

-There are lots of sour lollies on the market so you can choose from any of those or just go with some sour Warheads.

Chocolate Frogs can be added to the Honeyduke’s Candy Bar OR they can serve as favors on their own. That’s actually what I ended up doing for my wedding. Grab some frog molds and whip up some frogs a few days before. We wrapped each frog in gold foil and then placed each in an iridescent bag in our wedding colors. 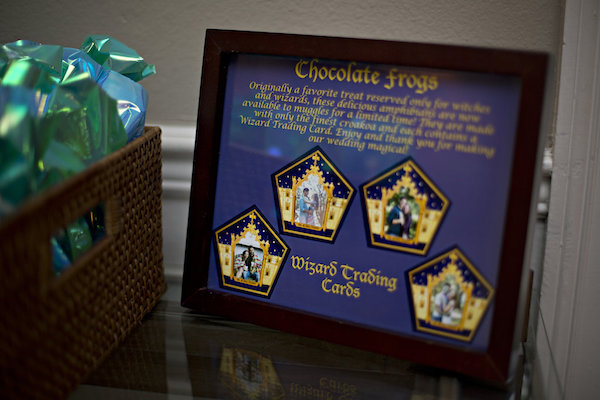 But this was the best part…We made our own Wizard Trading Cards! I found a template online and then I edited the graphics to include one of our engagement photos and a quick anecdote about us on the back. We had a set of four so four different pictures and four different stories. We were able to get them printed in the proper shapes so they had the look and feel of of real trading cards. Next to the favors, we placed a sign so everyone would know what they were getting. You are also more than welcome to print out the boxes on cardstock and fold them up for the favors, but I felt like that would take longer than I was willing to spend so we used the magical looking bags instead! 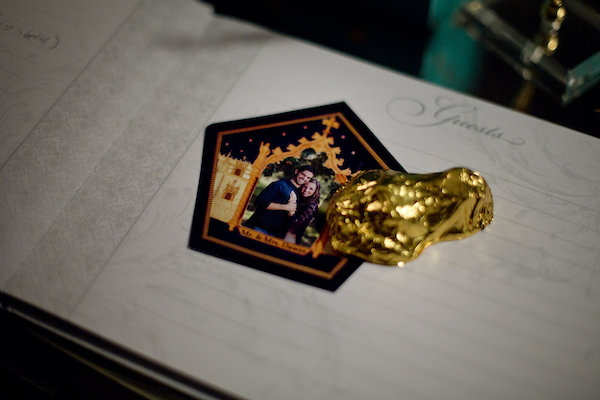 It’s not an actual book, but for your guest book, have your guests write with quills on a long scroll. After it’s finished, you can hang it in your home stretched out however you’d like. Pretty unique and nerdy decor for your new home together!