Welcome to this week’s installment of Geek Girl Authority Crush of the Week, wherein we shine a spotlight on strong women who inspire us. Now, this not only includes fictional female characters in geeky media, but creators as well. These ladies are a prime example of female empowerment and how crucial it is for kids to have said example to follow.

DISCLAIMER: The following may contain spoilers for Marvel’s Agents of S.H.I.E.L.D. up to the current and final season. If you are not caught up with the series, then you may not want to read on, but if you don’t care about spoilers either way, then continue!

Elena Rodriguez, code name Yo-Yo (played by Natalia Cordova-Buckley) is the Inhuman slingshot of Agents of S.H.I.E.L.D. Not only is she fast, she’s intuitive, brave, and resilient. Yo-Yo first appeared in season three, after Inhumans were introduced to the show. She decided to use her powers for good even if that meant being on the wrong side of the law.

Yo-Yo was recruited for the Secret Warriors team by Agent Daisy “Quake” Johnson (Chloe Bennet). And like Daisy, Yo-Yo ended up on S.H.I.E.L.D. ‘s radar as a possible threat after her Inhuman powers manifested. Yo-Yo signed the Sokovia Accords and used her position in S.H.I.E.L.D. to make the world a better place. But, that doesn’t mean she always obeys the law.

Since joining S.H.I.E.L.D., Yo-Yo has been to space, the future, the past, and an alternate reality. She has experienced some setbacks losing her arms and getting possessed by a deadly parasite from another dimension, forcing her to find and use her other strengths. Which is good because Yo-Yo is having trouble accessing her powers right now. Through it all, her team has been right by her side. That’s why she remains loyal to S.H.I.E.L.D. 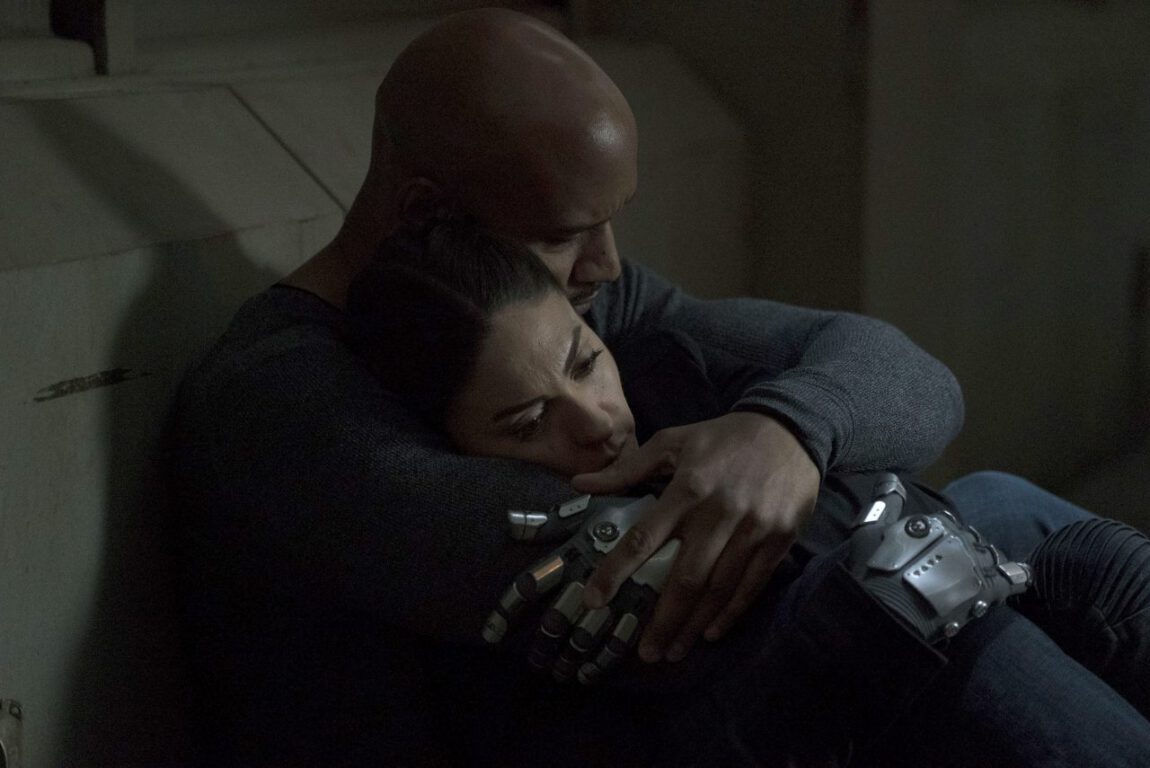 Yo-Yo fights hardest for her team and her love, Alphonso “Mack” Mackenzie (Henry Simmons), a stickler for the rules. You know what they say, opposites attract. He butts heads with Yo-Yo, but he knows her heart is good. And she inspires him to bend the rules every now and then. They balance each other out.

In three seasons, the Agents of S.H.I.E.L.D. became a cohesive machine that values every member. Losing a teammate, like Phil Coulson (Clark Gregg) could have broken them, but it only made them stronger.  Yo-Yo was the most prepared because she knew it was the only way to save the world from destruction. She learned of Coulson’s fate in the future. She also knew she would lose both of her arms. Yo-Yo lost both arms in a fight with Ruby Hale (Dove Cameron) and her blade rings. That’s how she got her robotic arms. Seeing her weakness only gave Yo-Yo a stronger resolve when facing this obstacle.

That brings us to her latest setback. Yo-Yo was possessed by a Shrike parasite in the team’s battle with a Coulson doppelganger. After he was defeated, Yo-Yo got rid of the Shrike, but she’s been different ever since. Yo-Yo can’t slingshot anymore and no one knows why. Yo-Yo puts the mission first and deals with her woes privately. You don’t have to have superpowers to be a hero. You just have to do the right thing. And right now, the right thing is preserving the past.

The agents are time traveling through history to stop the Chronicoms from destroying S.H.I.E.L.D. Agent Rodriguez is a team player, despite her vulnerability.  She knows the world would be worse off without S.H.I.E.L.D. And if the Chronicoms succeed, there may not be anyone to save.

Elena “Yo-Yo” Rodriguez has always been a fighter. She gives everything for those she loves and protects. Yo-Yo focuses on the task at hand and doesn’t let her emotions get the best of her. She isn’t afraid to be vulnerable or admit when she needs help. She learns from each of her friends and isn’t afraid to disagree with them, especially if she’s trying to protect them. Yo-Yo matters because she doesn’t let anything or anyone keep her down.

So be like Agent Elena “Yo-Yo” Rodriguez and fight for the good of the world even if it means breaking the rules. And when life pushes you down, bounce back stronger, wiser, faster, and with more fire.

RELATED: Check Out All of Our Geek Girl Authority Crushes of the Week Here!