It’s that time of year again. In a few days I’ll be knee deep in nerds, roaming the host hotels, enjoying Hopsplosion at Max Lager’s and certainly attending the best panel in the world, Five Truths and a Lie. Inevitably, I will mostly be in the Westin Peachtree in the ATL, with thousands of friends and my trusty flask. Yes, people, it’s time for Dragon Con. This year will be my eighth straight year attending this amazing convention.

Over the years, I have gotten to meet Vork and Zaboo from The Guild, listened to panels by legends William Shatner and George Takei, heard Billy Boyd sing Pippin’s song, and enjoyed my share of Filking. (Read about it here) I’ve experienced just about everything that Dragon Con has to offer, and I’ve loved most of it. Over the last several years, though, I have found myself mostly enjoying the opportunity to play games with a growing list of friends who attend the Con each year. Last year we had a blast, sitting in on demos, playing some RPGs and possibly (actually, often) imbibing some adult beverages along the way. Here is a photo of last year’s stack of games that I brought with me (excuse the blurriness, I may have been tipsy): 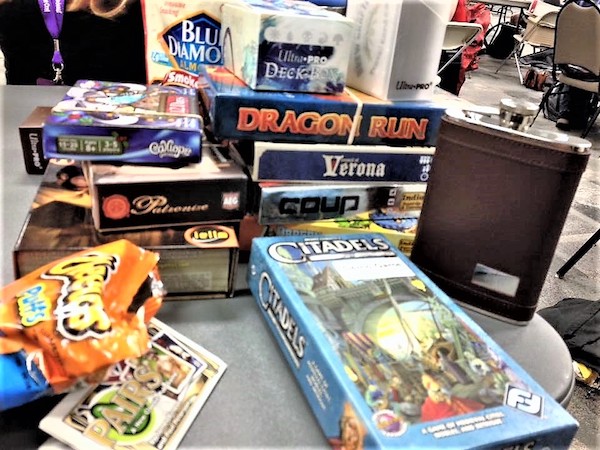 Here is a picture of The Mother Of Dragons (a former stranger we met at the “Are You A Dementor?” game late one night) playing Coup with us. 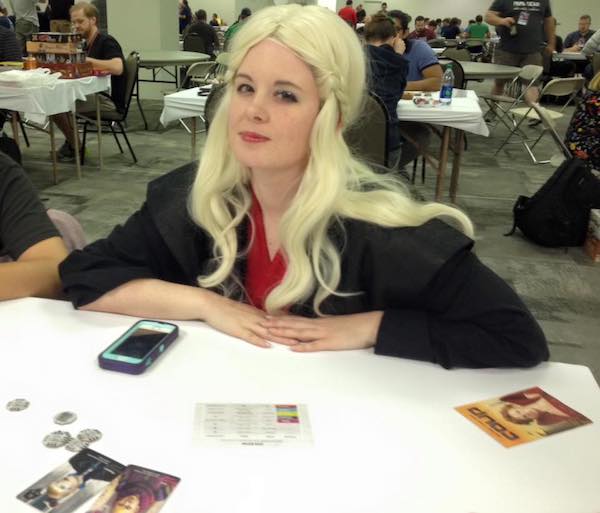 Here is a close up of my D&D character in a hilarious game I played in.

And here is an in-action shot from our demo play of Star Trek: Five Year Mission with the folks from Mayfair Games. 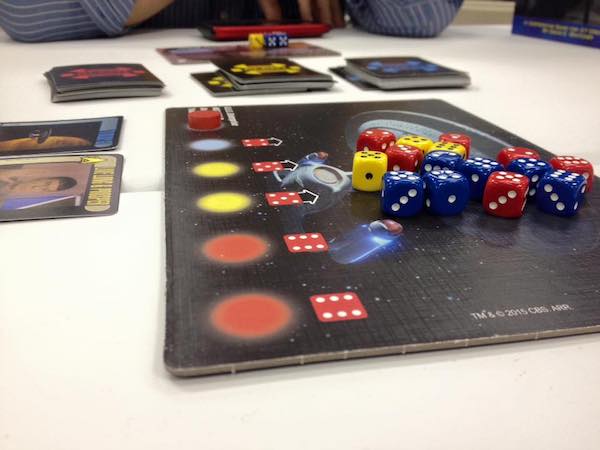 This year I’m planning on bringing the following games (pictured in the cover of this article):

1) Planetarium – One of my buddies was intrigued by the photos I posted of a few of us playing this beautiful game by Game Salute last week. He is a science lover and the theme (influencing the planet formations in a fledgling solar system) is right in his wheel house. I love playing it, he requested that we play it, and so this is a no-brainer.

2) Rock, Paper, Wizard – Most of my Dragon Con crew are huge Harry Potter fans. While this is a game from the D&D universe published by Wiz Kids, it consists of players casting spells on each other simultaneously by making hand gestures (like Rock, Paper, Scissors). Add some alcohol to this one and it will be a glorious time of defending against the Dark Arts. On a related note, here is a friend of mine making a hand gesture during a game of Citadels at last Dragon Con. 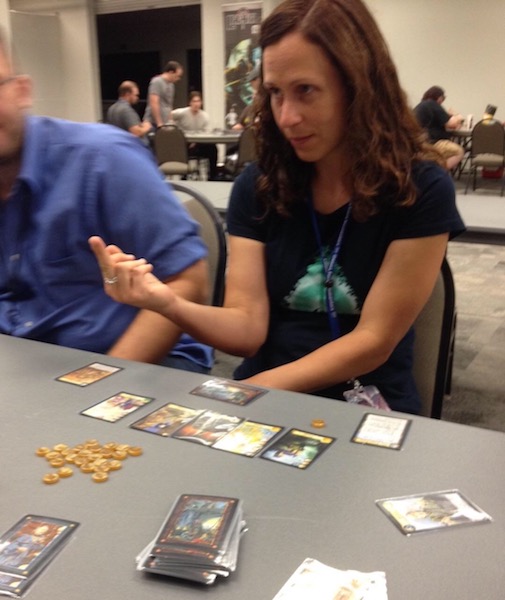 3) Coup (with the Reformation expansion) – We played a lot of Indie Boards & Cards’ Coup last year, and we loved bluffing and challenging each other. But with only 6 players, we could not get everyone in at times. The Reformation expansion adds up to four more players to the base game, which solves our problem. Also, since we know this one pretty well, it should be easy to add the few extra rules if we want, with little problem.

4) One Night Ultimate Alien – We’ve played the snot out of Bezier’s One Night Ultimate Werewolf over the last couple of years. It’s time for something fresh, so this brand new iteration of an excellent party game that plays up to 10 people should give us several rounds of fun.

5) Viticulture – This one is a guilty indulgence on my part. I’ve never played it, but I just got a copy of this critically acclaimed game from Stonemaier Games for my collection. It’s sleeved and ready to go. While it is heavier than the other games on my list, it’s a long convention, and the theme is about making wine, so I hope I get a chance to try it out with some willing participants.

6) My polyhedral dice – This year I signed four of us up to play a D&D 5e game for a couple of hours on Sunday afternoon. Every year we have signed up as a group to play with a Game Master or two who is a stranger, and every year it has been a blast. What a great opportunity to sit down with friends and do some role-playing, Con style. I’m really looking forward to it.

Well, that’s it. Time to start packing. Thanks for reading and keep nerding on.