I have to make a confession. Sometimes… in fact, a lot of the time, Game of Thrones makes me mad… but not tonight! The season seven premiere, “Dragonstone,” was straight-up rad.

When we last left Westeros, Arya Stark (Maisie Williams) had just slit Walder Frey’s (David Bradley) throat after serving him a pie full of his sons. When we rejoin the action, Walder appears to be alive and well and presiding over a feast… a feast peopled exclusively with his male relatives. He speechifies about how odd it is for him to host two feasts within such a short space of time, then offers every guy in the room some fine wine and segues into talking about the Red Wedding while they all drink, but he abstains. He congratulates them on killing a pregnant woman and a mother of five, then points out that they didn’t kill all of the Starks that day.

IT IS ARYA! She’s using face magic to impersonate Walder and kill every male in his family!

When they’re all dead, she removes Walder’s face and tells the young woman (a Walda, maybe?) she’s spared to tell anyone who asks about what happened there that the North remembers and that winter came for House Frey.

When Arya leaves The Twins after massacring House Frey, she heads south towards King’s Landing. In the woods, she comes across a group of soldiers (including an Ed Sheeran), singing a “new” song as they make their way to “keep the peace” in the Riverlands. They invite her to share their humble dinner and the warmth of their fire, then go around the camp offering her personal details that suggest that they are simple men who are not especially loyal to Cersei and have loads of reasons to ttleve. They may as well all be two days from retirement and showing her photos of the boats they’ve been saving up for, since they’re all likely to die one way or another. When they ask her why a nice girl like her is heading to a yucky place like King’s Landing, she answers honestly that she’s going to kill the queen, and they all laugh it off as a joke. She doesn’t want to have to kill them, too, so she joins their laughter with a look of regret and relief in her eye.

Also on the road in Westeros is The Hound (Rory McCann), traveling with Beric Dondarrion (Richard Dormer), Thoros of Myr (Paul Kaye) and their band of highwaymen. The group finds an apparently abandoned house to take shelter in, and The Hound is reluctant to follow. It’s the same house where he stole silver from a poor father and daughter, and indeed the duo’s corpses are inside. It looks like they were starving, and the father took both of their lives to spare them suffering.

The Hound, cranky as ever, challenges Dondarrion about why the Lord of Light would keep bringing someone so dull back from the dead. To answer his “whys,” Thoros invites a fire-phobic Hound to gaze into the flames in the hearth for answers. In the fire, he sees The Wall and the army of the dead passing around it and heading south.

Also seeing the army of the dead: the Three-Eyed Raven himself, Bran Stark (Isaac Hempstead Wright). He has arrived at The Wall with Meera Reed (Ellie Kendrick), traveling south to rejoin their pack. They’re greeted by Eddison Tollett (Ben Crompton), who challenges their identities and accepts Bran’s eerie knowledge of Eddison’s history with the White Walkers as I.D. All of the Starks are back in Westeros! 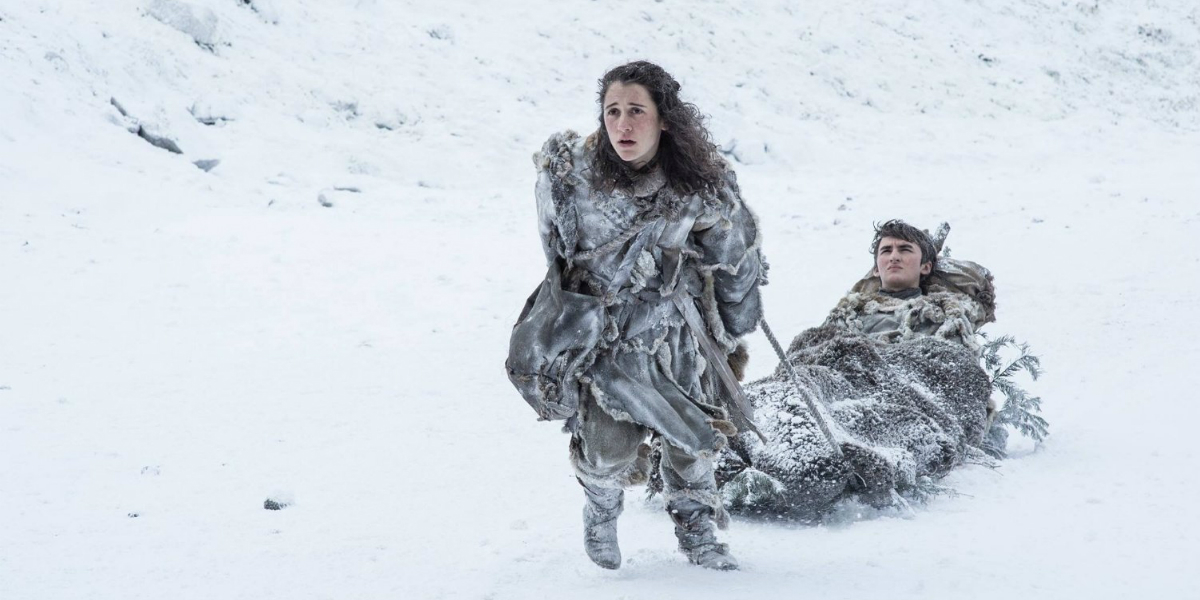 Speaking of Starks, Jon Snow (Kit Harington) is owning his new role as King In The North by breaking down the threat of the White Walkers to all of the Northern Lords (and a few choice Ladies). He tasks them with having their Maesters scour their records for mentions of Dragon Glass, alerting them to its value as a weapon against the White Walkers and laying the foundation for a plan to find and mine it for weaponry.

Then he tells them that everyone between age 10-60 will begin daily combat drills, and when one crusty old Lord says something gendered about that, Jon sets him straight that this will be equal-opportunity fighting. While Brienne (Gwendoline Christie) and Sansa (Sophie Turner) each look satisfied to hear this (finally), it’s plucky Lyanna Mormont (Bella Ramsey) who stands up to school any quiet misogynists in the group, receiving their customary acquiescence and respect when she does. She’s so badass!

(Notable: When the daily combat drills begin at Winterfell, the heat rises again for Tormienne!) 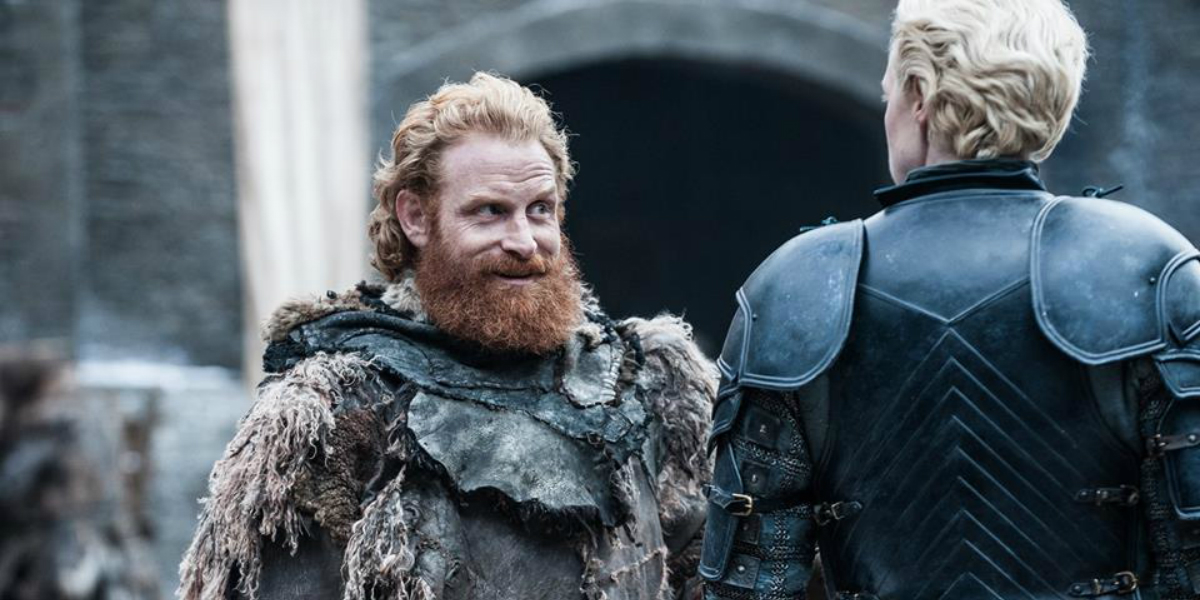 Jon and Sansa get into a little bit of a scuffle when he starts outlining how he wants to man the empty Night’s Watch castles along the most vulnerable parts of The Wall and then to fortify the family castles that would be the next line of defense if The Wall fell. Tormund Giantsbane (Kristofer Hivju) readily agrees to have the Free Folk man the Night Watch’s castles, but the empty family castles belong to the Karstarks and the Umbers– two families who broke faith with the Starks and fought with Ramsay Bolton.

Sansa challenges Jon’s desire to empower the young heiress and heir of these respective castles, returning their ancestral homes to them and asking them for their pledge. She believes the castles should be stripped from the families and reassigned to more loyal families. Jon does NOT like being contradicted in front of an audience, and he shuts her down, which practically makes Littlefinger (Aidan Gillen) drool.

Afterwards, Jon and Sansa have a decent heart-to-heart, in which she compliments his leadership abilities and then checks his arrogance. They talk frankly about the differences in the ways Ned Stark spoke in front of his sons and daughters, and Sansa once again tries to impress him with the fact that although he knows battle strategy, she knows the players. She wants him to take her counsel seriously, and the arrival of a raven from Cersei that says they need to come bend a knee to her or suffer the consequences underlines the value of Sansa’s insights. They’ve been so focused on the enemy to the north that they’ve nearly forgotten about the enemy to the south.

Cersei (Lena Headey), however, hasn’t forgotten about them. She’s having a massive map of the Seven Kingdoms painted on the floor of a courtyard in the Red Keep when Jaime (Nikolaj Coster-Waldau) finds her. While she is focused on the enemies surrounding King’s Landing, and on beating them all, Jamie tries to introduce a note of reason. He pleads with her to seek allies and think strategically about what a winning army needs– food and horses, among other things. She’s beyond reason, though. Despite their children being dead and there being no likely line of succession, she’s determined to take all of the Kingdoms for herself and the Lannisters.

Although she may be beyond reason, she has already thought about allies, and she has one en route right then. Euron Greyjoy (Pilou Asbæk) wants to offer Cersei the Iron Fleet in exchange for her hand in marriage. Cersei isn’t ready to accept, so Euron goes off to get her a “priceless gift” to win her hand. It will be fun watching Danerys set her dragons on him soon.

Meanwhile in Oldtown, Sam (John Bradley) has entered a dispiriting Groundhog Day of emptying and cleaning chamber pots, serving meals and putting library books away. He’s desperate to get into the library’s restricted section, but Archmaester Marwyn (Jim Broadbent), the guy who could give him permission and believes him about the White Walkers, takes such a long view of history that he thinks there’s no rush. Sam disagrees and steals the keys from a Maester he’s seen entering the locked library section that holds all the books referencing previous long winters.

Sam steals several books and takes them to his little residence, where Gilly (Hannah Murray) and Baby Sam seem to hang out and wait for him all the time. He’s sleep deprived, but he’s determined, and he finally makes a breakthrough: Dragonstone is literally built on a mountain of Dragon Glass. He scratches out a note to Jon to let him know.

Sam had a chance to make two big discoveries, but he didn’t recognize the scaly grey arm that reached for him (from a hospital cell he was collecting dirty dishes from) as belonging to Jorah Mormont (Iain Glen), desperate for news of his queen while apparently following her command to seek a cure for greyscale. 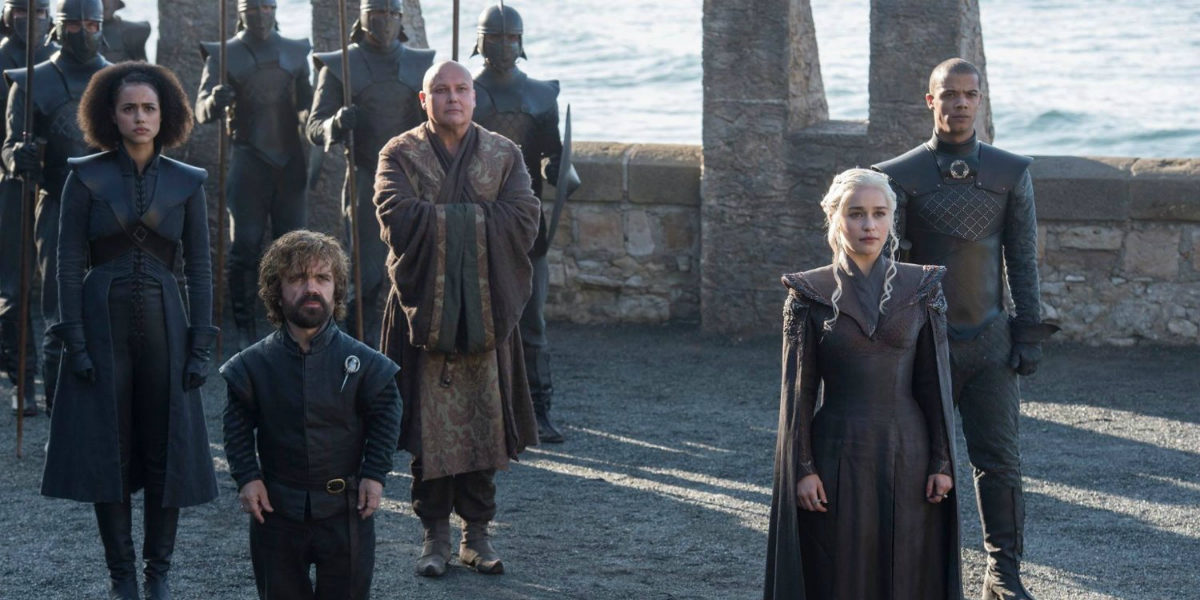 They slowly make their way up an insanely long staircase to the castle as the Dragons circle overhead, and when they reach the throne room, Dany walks past the Stone Throne and into the war room behind it. She caresses the table we saw Stannis spend so much time strategizing over, looks out the window behind it, then turns to Tyrion and says, “Shall we begin?”

BAM AGAIN! What an opener!