Home » Games » Tabletop Games » Game Review – WELCOME TO THE DUNGEON: You Nana-Nana Need To Try It

Game Review – WELCOME TO THE DUNGEON: You Nana-Nana Need To Try It 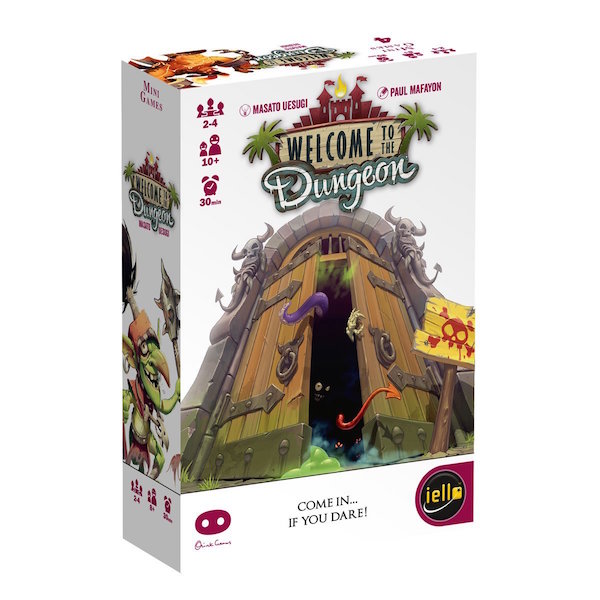 Do you like to dungeon delve? Do you like to bluff? Do you like to strip barbarians, wizards, warriors, or rogues of their belongings and leave them for dead? Do you like Pina Coladas and getting caught in the rain? If you answered yes to 2 of those first 3 questions, then you should consider giving iEllo’s Welcome To The Dungeon a try. (2-4 players, 15-20 minutes) . I had passed by Welcome To The Dungeon in a local store many times before deciding to give it a try. While any true fan of rock music couldn’t help but be intrigued the title, frankly the box art kept me from taking the game seriously. Given that I’m a sucker for looting dungeons, however, I finally decided to put my artistic prejudices aside and grab a copy. I’m glad I did.

Welcome To The Dungeon is simple in its objectives. Either get through the dungeon twice yourself, or have your opponents die twice while trying to make it through the dungeon. That’s all. The mechanics are about as simple. Each delve is potentially made by one of 4 hero classes. Each class has a starting hit point total and a few items of equipment. Most of the equipment either heals the hero or defeats certain monsters. For instance, the torch defeats all monsters with a strength of 3 or less. The monsters come in the form of cards whose strength ranges from 1-9 (no 8’s). The Dragon is the only “9” in the deck and is the most powerful card. At the beginning of the game one hero is chosen to be the delver. This hero and the hero’s equipment are placed in the middle of the table. The monster deck is shuffled and placed down in the middle of the table. 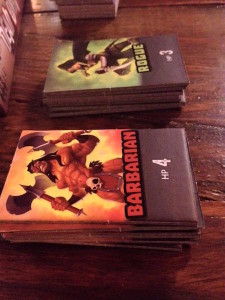 On your turn, you simply draw a monster and decide to put it face down in the dungeon or discard the monster (face down) from the game. If you put a monster into the dungeon, nothing happens and your turn is over. If you discard the monster, then you must remove one piece of equipment from the hero and your turn is over. Your third option is to pass, doing neither action, and removing yourself from the round. Passing ensures that you will not die this round (coward), but you also cannot score a point this round. (Remember, two deaths and you are out of the game). This is where bluffing comes into the game. Everybody sees the hero and his equipment, or what’s left of it. You also probably have placed one or more of the monsters that are in the dungeon, and have some idea of how tough it is. The last person remaining after people pass MUST take the hero and the hero’s remaining equipment into the dungeon to fight the monsters. If the player successfully kills all the monsters without losing all of the hero’s HP, she gets a victory scroll. (Again, two scrolls wins the game.)

Fighting the monsters simply means to flip over each card that was put into the dungeon, one at a time. If a piece of equipment defeats the monster, then the monster is discarded and you continue to the next monster. If the monster is not defeated, then the hero loses HP equivalent to the monster’s strength. If the hero still has HP left, then the player turns over the next monster card and fights it. If the hero has no HP remaining, she is defeated and the player is half way to losing the game. Then a new hero is chosen, the monster deck is shuffled, and the next round begins. Really, it’s that easy. Any complexity in the game comes from trying to remember what each piece of equipment does. There are are only 4 heroes, however, so after a couple of plays you will have seen them all multiple times and the game will move much faster. 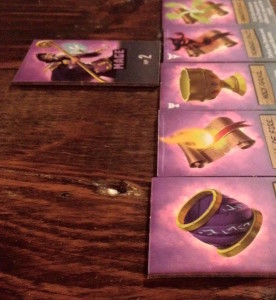 As goofy as the art on the outside of the box is, the cards and the hero/equipment tiles are much better looking and immersive. The game plays fast with any number of players, and is short enough that you will most likely want to play multiple times in a row. The strategy in this game is nuanced, because you really only have a couple of chances to see a monster before everyone passes. Therefore, you have to pay attention to what other players are doing. If the guy to your right has destroyed two pieces of equipment this round, maybe he wants the hero to die and is surely going to pass next time around. Maybe you were hoping to head into the dungeon, but now you change your mind and pass. If the other players to your left do the same, then the guy on your right will be the last one left, and he’ll have to go into the dungeon with the hero whose equipment he intentionally destroyed. Good luck, smarty pants to my right!

And there you have it. Welcome To The Dungeon is another small game that tries to pack a wallop. And while it is not a deep game by any means, it does bring dungeon delving into the social deduction/party genre nicely. This is a game that can be played just about anywhere, including a pub over a couple of beers or while you’re in line outside a panel at your favorite convention. (Say, for instance, 5 Truths And A Lie). At $15, the price point is pretty sweet. So, if (like me) you have passed this game by for any reason, maybe this will pique your interest and you’ll check it out.

Thanks for reading, and nerd on!

For this and other nerdly games, check out www.dicedropgames.com.