My colleague, Leona Laurie, and I are alternating weeks recapping Game of Thrones this season. On our off weeks, though, we still have something to say.

Game of Thrones opens on a marching army. Jaime Lannister (Nikolaj Coster-Waldau) opens the back of a wagon and tosses his friend Bronn (Jerome Flynn) a bag loaded with gold. While they’re riding a wave of victory, the Kingslayer seems moody. The two men squabble lightly. It turns out, Bronn wants a reward. He wants another castle. Could he take High Garden? Nah, he wouldn’t want that one. Daenerys (Emilia Clarke) could come take it at any moment…

Meanwhile, Cersei (Lena Headey) still finds herself facing off with Tycho from the Iron Bank (the always amazing Mark Gatiss). It turns out, the acquisition of High Garden allowed the Lannister family to once again pay off their debts… in full. Once Jaime’s gold arrives, Cersei will have the full support of the Iron Bank. Things are looking up for the Lannister family.

Across Westeros, Bran (Isaac Hempstead Wright) and Littlefinger (Aidan Gillen) are enjoying a heart to heart. Baelish reflects fondly on Catelyn Stark (Michelle Fairley). Baelish stares at the young Stark with calculating eyes as he wistfully turns a dagger between his fingers. He wasn’t there for Mrs. Stark when she needed him most. In a cryptic move, Baelish hands Bran the dagger. However, the conversation is interrupted by the arrival of Meera Reed (Ellie Kendrick). It seems she’s leaving. She needs to be with her family.

However, Bran and Meera don’t part on good terms, as it seems the little lord is having some trouble with his social skills. He barely acknowledges Meera’s presence, and it angers her. Meera’s brother Jojen (Thomas Brodie-Sangster) died for him. Hodor (Kristian Nairn) died for Bran… How can he be this callous? As they talk, it immediately becomes clear that Brandon Stark is not the boy he once was…

Meanwhile, Arya (Maisie Williams) can barely restrain her emotion as she finally returns to the grounds of Winterfell. Though, as per usual, Arya can never catch a break. As she tries to return home, two difficult guards stand in her way. She finally convinces them to bring Sansa (Sophie Turner) down and then quickly hides.

Related: Check out our Game of Thrones recaps, here. 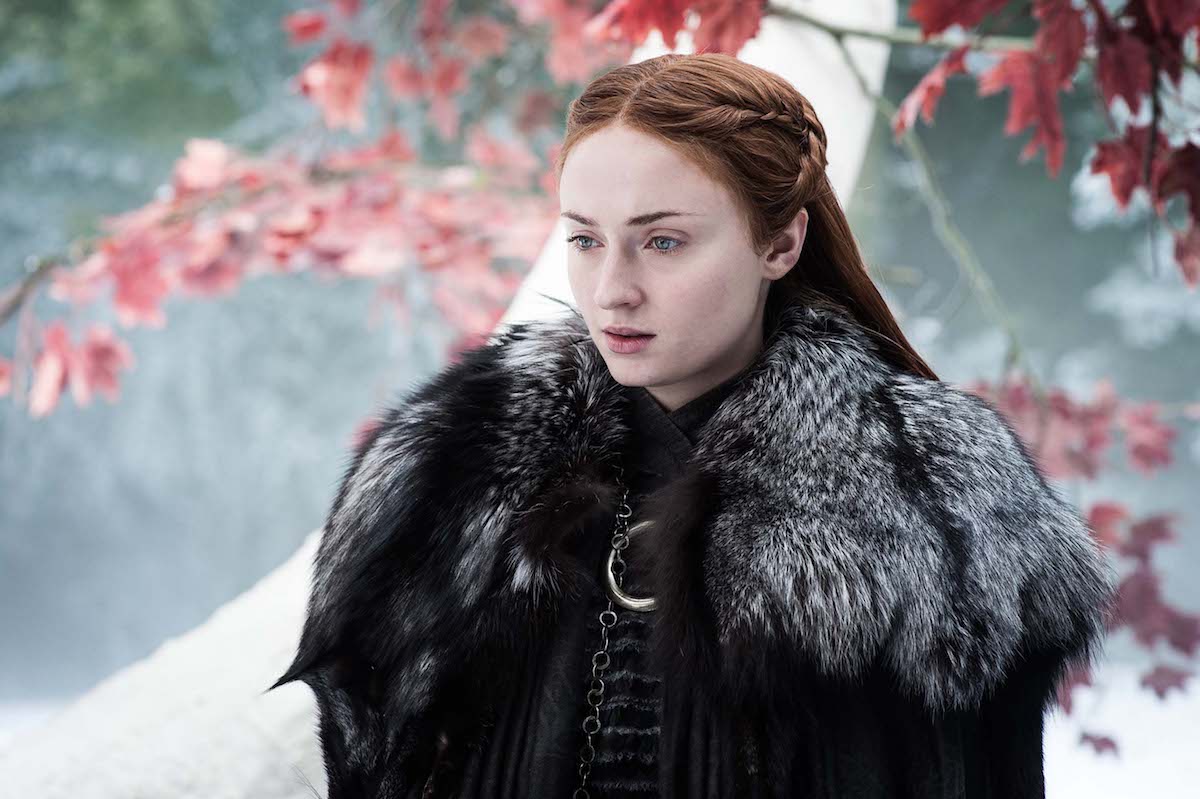 Once Sansa learns of her sister’s return, she knows right where to find Arya. The Stark sisters finally reunite in the burial chamber beneath Winterfell. They look up at the statue of their father. So much happened since season one. They giggle mischievously as Sansa learns of her sister’s hit list. In fact, both admit to being seriously disappointed that someone killed Joffrey (Jack Gleeson) before they could.

They go to meet Bran, who sits alone in his wheelchair. The reunion is once again awkward, but the topic of conversation quickly turns to Baelish. Bran passes Littlefinger’s dagger to Arya, “It’s wasted on a cripple”.

Meanwhile, tensions at Dragonstone are running high. There’s still no word from the Unsullied. However, the discussion quickly turns to dragonglass. Jon (Kit Harington) leads them into the depths of the island. The music swells majestically as they look over the dragonglass. The chemistry between Jon and Daenerys grows by the moment as they talk. They need to learn to work together if they’re going to survive. “The enemy is real,” Jon says. “It’s always been real”. They lock eyes in the underground cavern and Daenerys takes a step forward. She will help him fight. She’ll lend her armies… if he bends the knee.

However, their conversation is interrupted by the arrival of Tyrion (Peter Dinklage). The news keeps getting worse. Daenerys’ allies are falling faster than they care to admit, and Cersei is coming on strong. Furthermore, Daenerys is sick and tired of Tyrion’s clever plans. They need a new plan. They need to take action.

Meanwhile, Arya stumbles upon Brienne (Gwendoline Christie) and Podrick (Daniel Portman) training on the grounds of Winterfell. Arya looks up at the mighty warrior, and earnestly asks to train with Brienne. The moment quickly escalates into a fight of unending awesomeness as Brienne and Arya quickly lose themselves in the heat of the moment. There’s some tension they must work out between them. As they both stand, poised with their knives ready to kill, each woman flashes a coy smile and resheathes her own weapon. “Who taught you how to do that?”. Arya’s response is curt, “No one”. 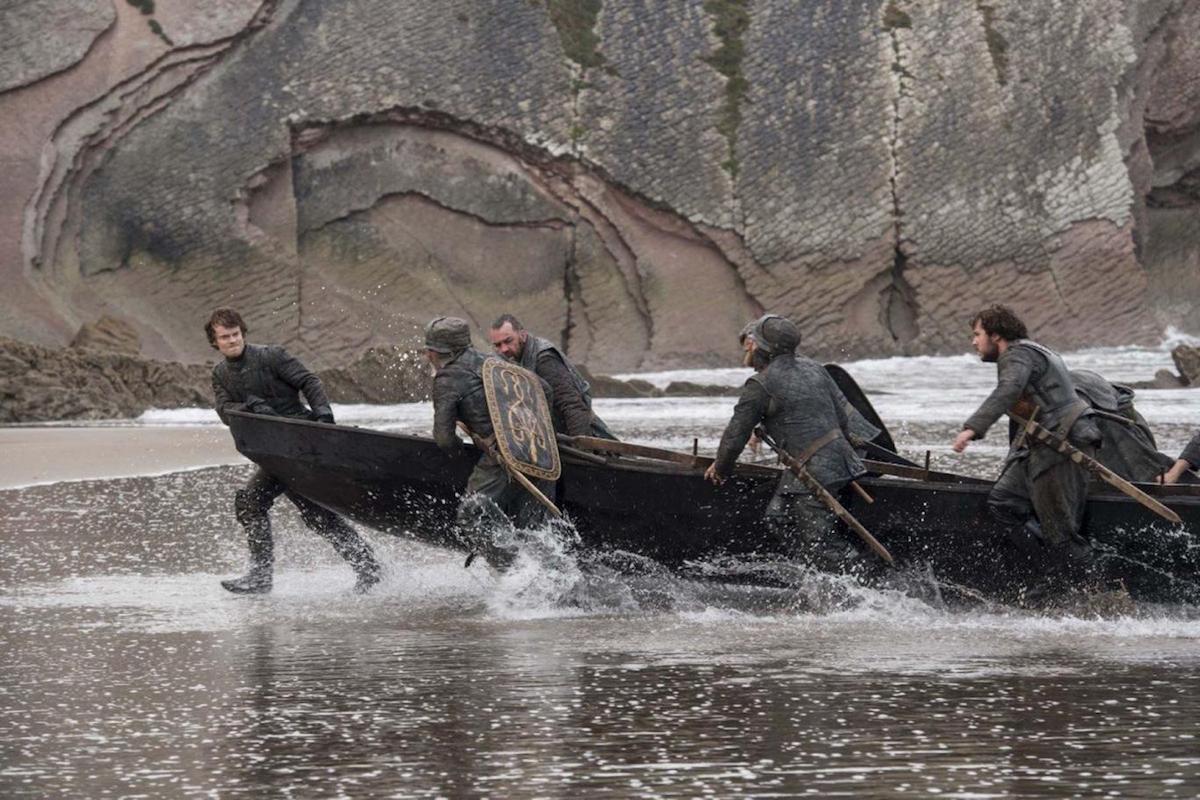 Later, the sound of bells chiming cracks the silence of Dragonstone. Jon lies in wait as Theon (Alfie Allen) docks a boat on the beach. However, as Jon grabs Theon roughly by the lapels, it’s clear Jon is not thrilled to see his old friend.

Meanwhile, Jaime and the Lannister army are parked on the open road to Kings Landing. The mood is light. However, a moment of terror quickly sets in. There’s a noise… they can’t place it. Suddenly, a hoard of Dothraki warriors sweep over the hillside, weapons at the ready. Just when they think they can hold them off, Drogon sweeps in. Daenerys rides on the dragon’s back, looking every bit the warrior queen. The result is yet another stunning battle sequence, and a tense 10 minutes of television.

When things looks stunningly bleak for the Lannister army, Jaime suddenly has an idea. He regroups his archers, pointing them in the dragon’s direction. Not only that, they also have Cersei’s wonder crossbow packed in one of the wagons. Bronn lies in wait, ready to fire…

As the sequence continues, Jaime increasingly struggles to keep a hold of his surging emotions. A commander can only watch his men burn to death so long. The moment is a subtle, but powerful one from Nikolaj Coster-Waldau, who is continually taking Jaime to new and interesting places this season.

There’s a pained scream as Bronn fires, and the bolt hits Drogon squarely in the shoulder. The dragon lands safety, but is clearly wounded. Danerys struggles to pull the bolt from his skin. Tyrion quietly pleads for his brother to stop, but can only watch as Jaime pulls a spear and charges Daenerys and Drogon. However, Drogon turns and fires a mighty flame straight at the charging Jaime. However, a figure suddenly flies into the shot and knocks the Kingslayer off his horse, into the safety of a nearby pond. Was it enough to save Jaime’s life?