GAME OF THRONES Recap: (S07E06) Beyond the Wall

My colleague, Leona Laurie, and I are alternating weeks recapping Game of Thrones this season. On our off weeks, though, we still have something to say.

Game of Thrones opens where we left off. Our fellowship of intrepid soldiers continue ever farther beyond the wall. The mood is tenuous as the men slowly feel each other out. While they walk and talk, the conversations jump between Gendry (Joe Dempsie) and the Hound (Rory McCann), Jon (Kit Harington) and Ser Jorah (Iain Glen) and Jon and Tormund (Kristofer Hivju). Few of the men know each other, and even fewer trust each other.

Meanwhile, a light snow falls over Winterfell. Tension grows between Arya (Maisie Williams) and Sansa (Sophie Turner). Arya tells a story about their Father during the pleasant days of their youth. As she talks, the divide between the sisters grows ever wider. Sansa squirms as Arya produces the letter she took from Littlefinger (Aidan Gillen). It seems the scroll is the one Sansa wrote to Rob (Richard Madden) in season one, seemingly siding with the Lannister’s over her own family. Is the new Lady Stark a traitor? Can the Stark sisters come back from a revelation like this?

Back beyond the wall, the walking and talking continues. Tormund and The Hound get to know each other, and for the first time we hear Tormund’s adorable feelings for Brienne (Gwendoline Christie), “I want to make babies with her!”.

Related: Check out our previous Game of Thrones recaps, here. 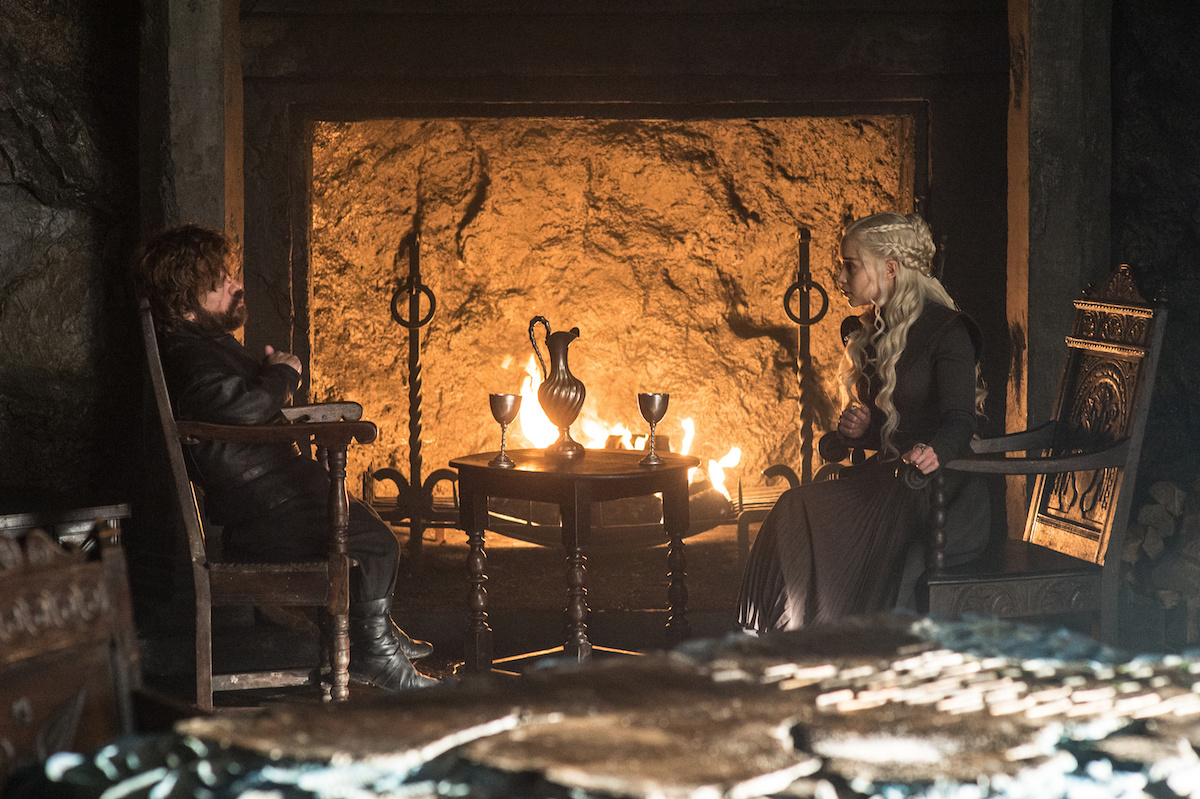 Across Westeros, Daenerys (Emilia Clarke) and Tyrion (Peter Dinklage) huddle over a drink. They talk about the battles and above all else, Jon Snow. Does the King in the North have a thing for The Mother of Dragons? Daenerys smirks, “He’s too little for me”. However, their conversation grows tense. Daenerys’ current course doesn’t thrill Tyrion. They need to plan for the long term.

Meanwhile, the weather grows worse beyond the wall. The group comes to a stop. They can barely see. Through the blinding snow, they see a figure running towards them. Gendry looks over, “Do bears have blue eyes?”. As a ferocious beast emerges from the blinding weather, they pull their weapons and a battle begins. The zombie bear dominates the fight, as men begin to fall. They only get the upper hand when the bear is stabbed, allowing the men to finally survey the damage.

Later, Sansa is growing increasingly anxious back at Winterfell. She talks quickly, while Littlefinger hovers near-by. Could Arya be preparing to betray Sansa? Baelish recommends Sansa speak with Brienne. After all, she is honor bound to protect both Stark girls. 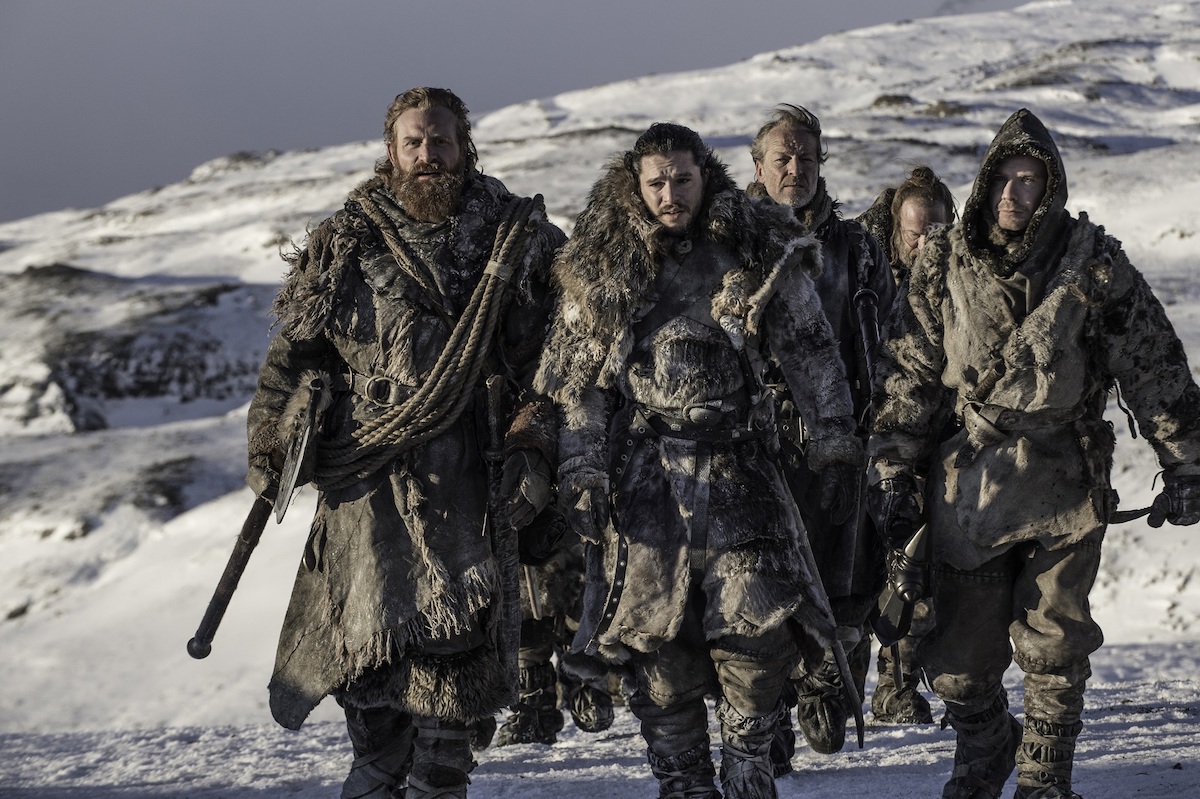 Meanwhile, Team Snow collect their belongings and continue on their way. However, things grind to a halt once again as they come across a group of White Walkers. There’s a moment of silence as Jon’s group decides to run at the small hoard. They are able to overpower one, but not before it lets out a shrill cry.

Suddenly, Jon stops. He hears something. There’s a moment of panic as Jon orders Gendry back to the Wall. He must send a raven to Daenerys. She’s their last hope. Gendry hurries into the distance.

Meanwhile, Jon and his men sprint onto an icy pond as a terrifying hoard of White Walkers appear over the mountainside. Honestly, things don’t look good for Team Snow as they take refuge on a rock. Thousands of Walkers surround them

At the same time, all that rowing paid off for Gendry, who makes impressive time through the lonely expanse of land. He collapses, but not before finally making it back to Davos (Liam Cunningham). “Raven, we have to send a raven!”.

Later, Sansa opens a scroll. It’s a letter inviting her to Kings Landing. She decides to send Brienne, who is best able to represent her interests at the capitol. Despite all Brienne’s protestations, she must obey Sansa’s orders.

Meanwhile, Daenerys and Tyrion hustle through Dragonstone to her waiting dragons. She’s received Jon’s raven, and she’s going to help. “I’m not going to do nothing again”. 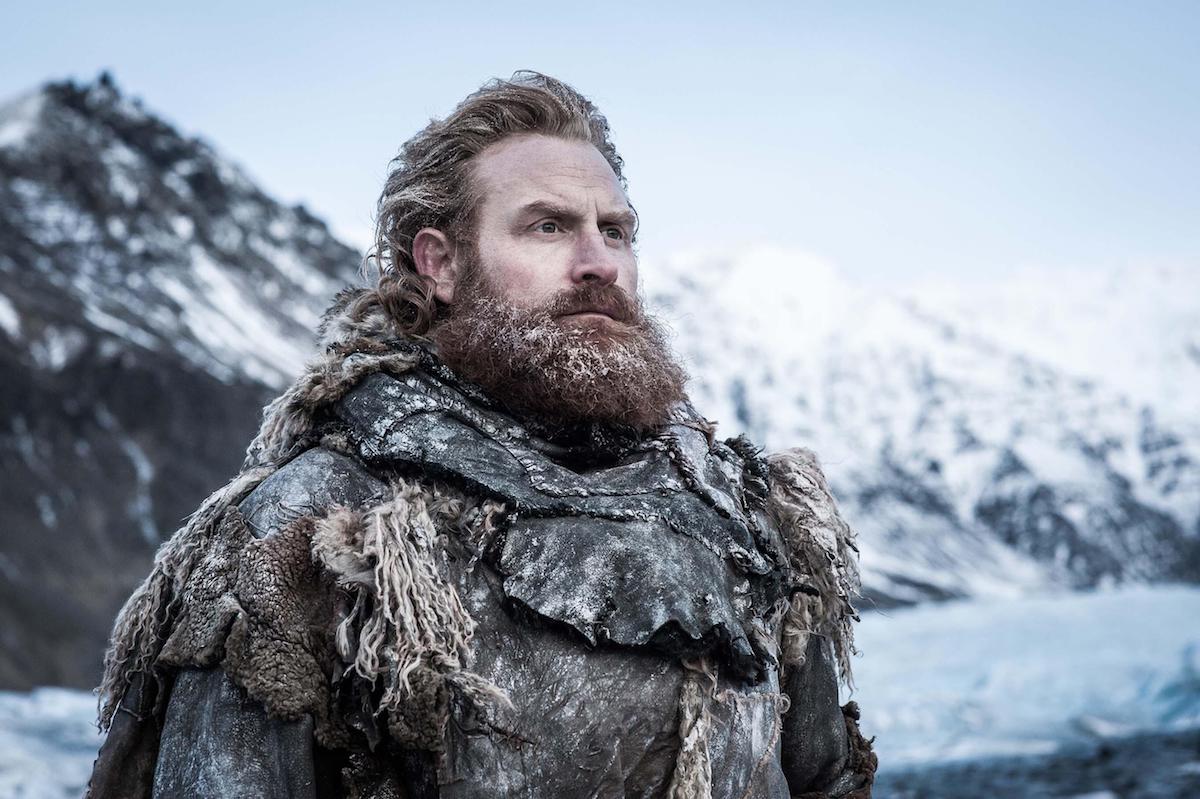 Unfortunately, there’s been a shift north of the wall. While thin ice kept the Walkers at bay, they quickly discover (thanks to The Hound throwing rocks) that they can once again cross the ice. The men can only wait helplessly as the Walkers trudge their way across the frozen lake.

Things once again seem really bleak as death quite literally stares our protagonists in the face. Suddenly, a stream of fire explodes from the sky. Daenerys sweeps in, with three fully grown dragons in toe. As she hoists the trapped men onto her dragon, the Night King emerges from where he laid in wait. He clutches a spear in his hand. With one throw, he spears one of the dragons, who plummets to the ground with a pained roar.

While Jon continues to fight his way through the hoard of Walkers, Daenerys takes off with the rest of Team Snow. They barely make it off the ground as the Night King once again approaches, ready to attack. The emotion builds in Daenerys’ eyes. She looks over her shoulder as her fallen child sinks below the water. 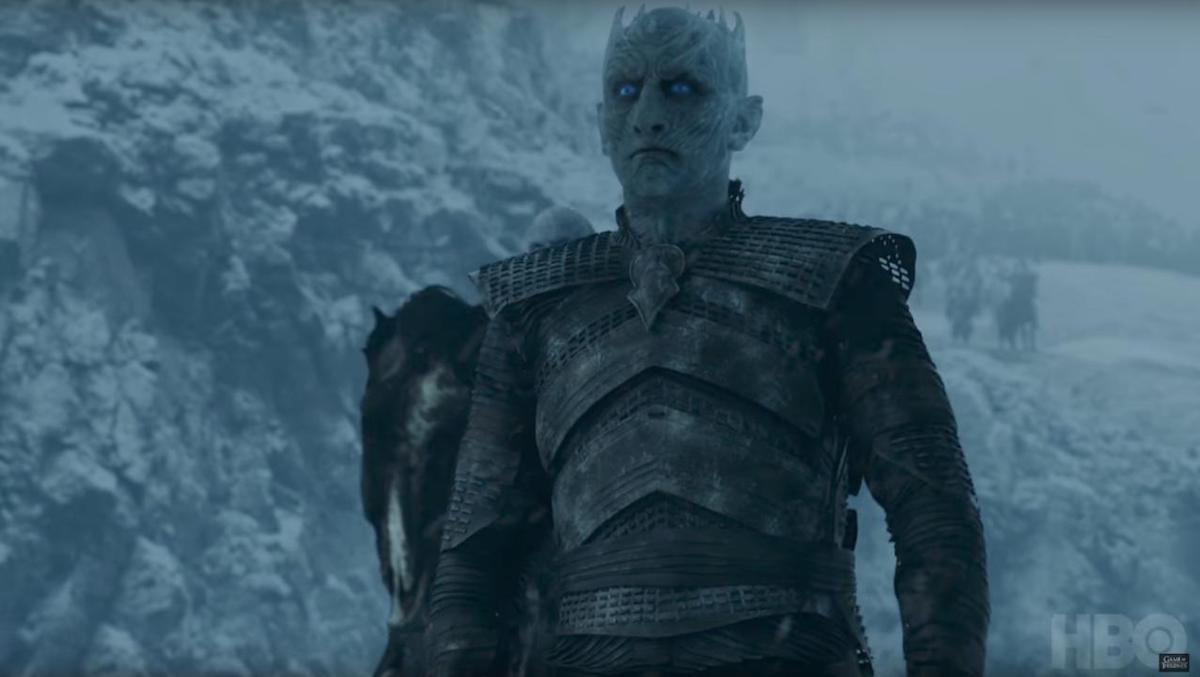 Meanwhile, Jon pulls himself up. He’s alone beyond the wall. He clutches his sword, ready to die. There’s a swirling flame as a mysterious rider emerges from the darkness. Uncle Benjen (Joseph Mawle) returns to save the day. However, he throws Jon onto his horse, and sends his nephew off while he remains to face an almost certain death.

Back at the wall, Daenerys and Jorah wait anxiously as a dragon flies overhead. While they prepare to leave, they suddenly stop as a horse materializes from the woods.

Later, Sansa still struggles in Winterfell. She goes through Arya’s things, pulling masks one by one from her bag. She looks up as Arya enters the room. “Those faces, what are they?”. Arya smirks, “The game of faces didn’t turn out so well for the last person who asked me questions”. Sansa can barely restrain her terror as Arya steps closer to her, clutching a knife between her fingers. “I wonder what it would be like to be the Lady of Winterfell?”. However, Arya suddenly hands Sansa the blade and exits. What does this mean?

Meanwhile, Daenerys and a weakened Jon leave the wall. She vows to defeat the Night King and his army. They are going to team up to do this together. There’s a tender moment between them as they join hands.

The snow swirls beyond the wall as the Walkers pull the fallen dragon from the icy water. The Night King crouches before the animal. Touching its nose, its eyes open. They’re icy blue.

Game of Thrones airs Sunday nights on HBO. Tune in next week for the season finale.