I’d say the theme of season seven of Game of Thrones, at least so far, is “let’s not waste any time here.” Tonight’s episode, “The Queen’s Justice,” was full of moments of satisfaction after long waits and some almost instant gratification.

Like both of its predecessors in this season, this episode opened with the answer to the question we collectively cared about the most. In this case, will sparks (literal or figurative) fly when Daenerys (Emilia Clarke) and Jon Snow (Kit Harington) finally meet? They kind of did!

Jon and Davos disembark from a rapid sea voyage, proving once again that travel time in Westeros is completely arbitrary, to be greeted on Dragonstone by Tyrion (Peter Dinklage), Missandei (Nathalie Emmanuel) and a small horde of Dothraki. They are stripped of their weapons and the dinghy that could transport them back to their ship, then escorted up the world’s longest staircase to meet their queen. 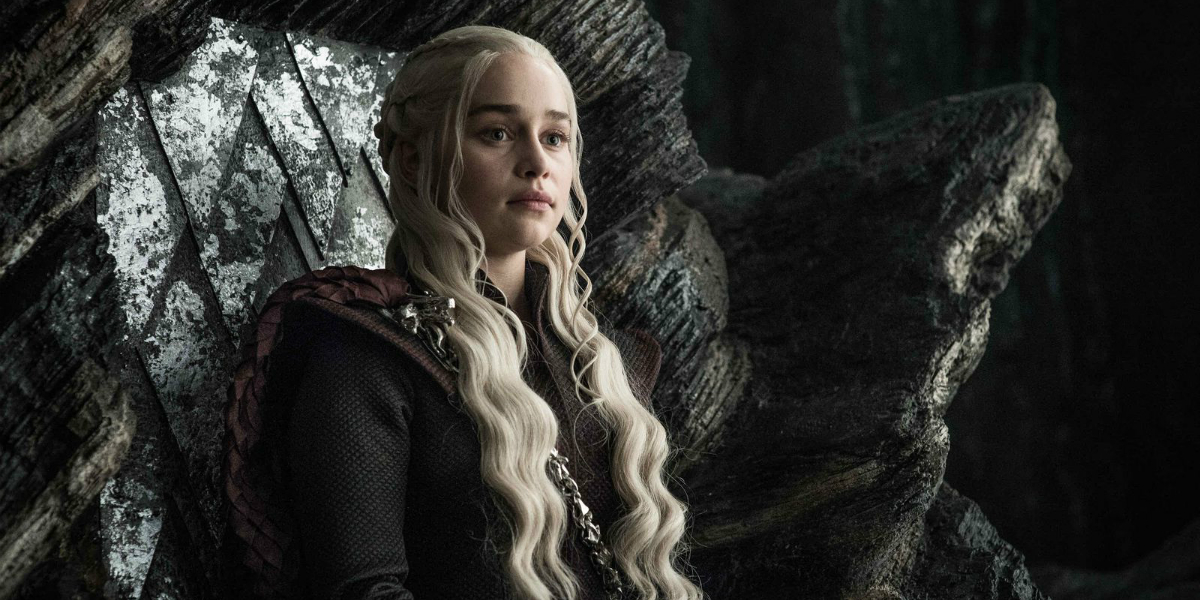 Once in the presence of Daenerys (Stormborn of house Targaryen, rightful heir to the Iron Throne, rightful Queen of the Andals and the First Men, Protector of the Seven Kingdoms, the Mother of Dragons, the Khaleesi of the Great Grass Sea, the Unburnt, the Breaker of Chains), Jon (Snow) makes an impression on the pixie who’s used to having men fall at her feet by refusing to even bend a knee. She reminds him of his family’s ancestral fealty to hers, and he rejects that and suggests that their focus on the Iron Throne might be a huge distraction from the army of the dead that threatens to move south of The Wall. Davos pipes up to defend Jon’s position by listing his achievements — including taking a knife to the heart for his men, which Jon shushes.

Jon retreats to brood on a green cliff above the ocean, cursing himself for being foolish enough to come south. Tyrion finds him there and says: “I came down here to brood over my failure to predict the Greyjoy attack. You’re making it difficult. You look a lot better brooding than I do.”

Tyrion, this is the kind of line that makes me love you.

Although the two don’t use the moment to catch up on what’s happened since their last meeting when Tyrion was urinating off of The Wall, Tyrion does counsel Jon to talk to all of the people he can on Dragonstone to learn more about Dany and why they’ve all pledged their loyalty to her. He then asks if there’s anything practical he can help Jon with, and Jon mentions the dragon glass he wants to mine, which might have been a stronger ask in the throne room than throwing out a bunch of questionable stuff about white walkers and the Night King, but who are we to judge?

Tyrion takes Jon’s request to Dany where she’s brooding in the war room. (Jon and Dany both brood! They have so much in common!) He asserts that he believes Jon’s story and urges her to give him the dragon glass in order to secure him as an ally. She asks him what that business about Jon taking a knife to the heart for his men was, and he dismisses it as Northern nonsense. (But is his dismissal sincere? If not, what’s his motivation in obscuring something so interesting?)

Later, Jon broodingly approaches Dany as she broods on a wall overlooking the ocean and watches her dragons fly about. They engage in some light verbal sparring, her asserting her ownership of the Seven Kingdoms again and him rejecting it again, but they do bond a little over both having some dead brothers, so she offers him the dragon glass and anything else he needs. He beats a hasty retreat to get to work, and she looks after him like: “Hmmm… that dude barely registered that I’m female. I’m intrigued!”

Meanwhile for House Stark, the pack is beginning to reassemble at Winterfell! Bran (Isaac Hempstead Wright) and Meera (Ellie Kendrick) have finally made it home, and not a moment too soon. They show up at the gate just as savvy Sansa (Sophie Turner) has run out of logistical chores to attend to, like shoring provisions and overseeing the production of armor, and has fallen into the mesmeric conversational clutches of Littlefinger (Aidan Gillen). He’s whispering to her that she needs to have a mental 360 going at all times so she can anticipate any action so blithely that she’ll basically be bored by her own successes. 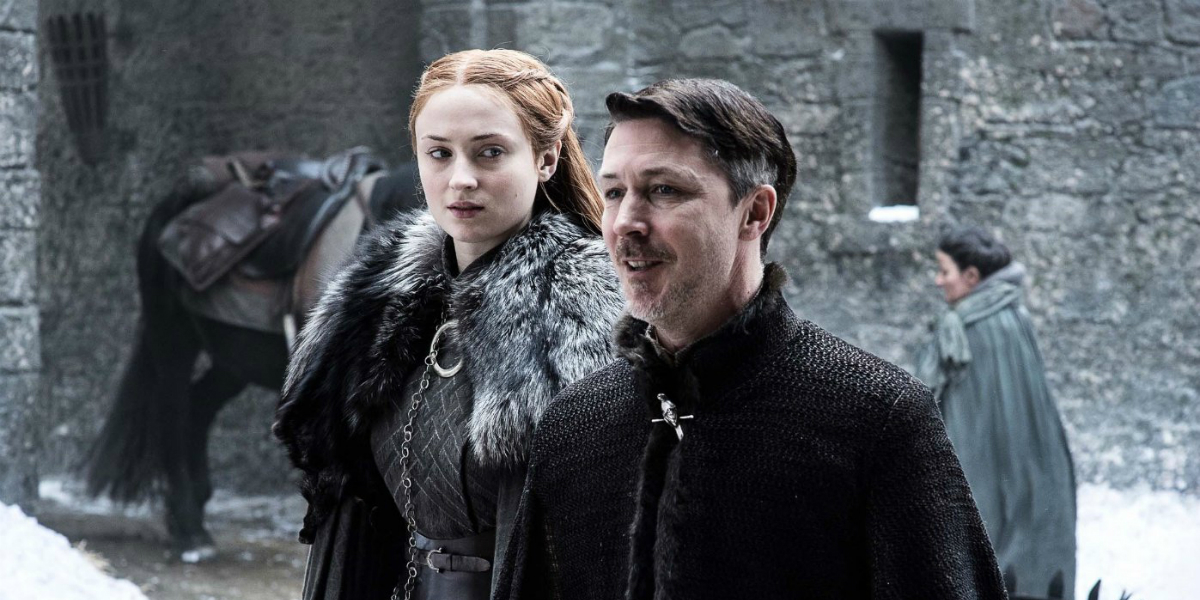 Before he gets too far with her, the Three-Eyed Raven himself gets dragged into the castle where he shows off how his new role has stripped him of all social graces by looking catatonic while his sister weepingly embraces him.

After their half-way emotional reunion, they venture to the weirwood to visit. Bran vaguely attempts to explain that he’ll never be lord of anything because he’s the Three-Eyed Raven and can literally see 360 through all space and time. Then he tells her, in a faraway, expressionless manner, how beautiful she looked on her wedding night with Ramsay and expresses his condolences for the things that happened to her in their home. She freaks, since he’s basically saying that he psychically witnessed her being raped, and she leaves him alone in the snow.

No appearance from Arya (Maisie Williams) this time, but if she’s able to make as good time on her horseback ride home as Jon made on his boat trip to Dragonstone, she should be in Winterfell next week.

In points south, Euron Greyjoy (Pilou Asbæk) returns victorious to King’s Landing with Ellaria Sand (Indira Varma), Tyene Sand (Rosabell Laurenti Sellers) and Yara Greyjoy (Gemma Whelan) in tow. He presents the former two to Cersei (Lena Headey) as a gift, eliciting a weak acceptance of his marriage proposal in return– once the war is won. Euron quietly asks Jaime (Nikolaj Coster-Waldau) for tips on pleasuring his sister sexually, then departs King’s Landing with Yara on a leash behind his horse, ready to get back to work for his queen.

When he’s gone, Cersei has her lackeys lock Ellaria and Tyene in a dungeon cell, chained to opposite walls and facing each other. She is wearing distracting coral lipstick throughout her catlike torture of her prey, describing for Ellaria all the ways she’d considered killing her only daughter in retribution for Ellaria having murdered Myrcella. Aha. The lipstick.

Cersei plants a lingering kiss on Tyene, having had Qyburn (Anton Lesser) work out what poison had killed her daughter and how. Then she ingests the anti-venom and explains that her plan is for Ellaria to remain imprisoned there, watching her daughter die and then decay. Then, charged up by vengeful child-murder, Cersei finds Jaime and mounts him with gusto.

In the afterglow of their coupling, there’s a knock at the chamber door. Jaime is ready to hide, but Cersei is done hiding. She opens the door wide, allowing the serving girl behind it to see exactly what was going on in there. Methinks that was a grave slip for the scheming queen.

As Jaime goes off to execute the next leg of Cersei’s preemptive strikes against Dany, Cersei sweet talks a debt collector from The Iron Bank of Braavos into giving her a couple of weeks to repay them. She’s confident she’ll be able to do that, because the mission Jaime is on is crushing the Tyrells and taking all of their gold.

Dany’s Unsullied are able to conquer Casterly Rock easily, thanks in part to some inside tips from Tyrion but mostly because Jaime has taken the bulk of the Lannister Army to lay siege to The Reach. (Euron shows up at Casterly Rock after Grey Worm’s (Jacob Anderson) victory to sink all of the Unsullied’s ships and prevent their being able to leave.) 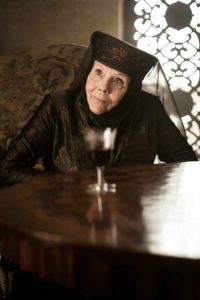 The Lannisters mow through Lady Olenna Tyrell’s (Diana Rigg) men easily, and Jaime practically saunters into her chambers to execute her. He pours them both some wine, they discuss his love life in the safety of her anticipated departure from this mortal coil, and after she’s consumed the painless poison he’s poured into her cup she confesses boldly to having killed Joffrey and asks him to make sure to tell Cersei it was her.

Jaime’s face as he realizes his brother didn’t kill his son is fascinating, and I’m hoping this revelation will seriously compromise his loyalty to Cersei.

In the Citadel, Jorah Mormont (Iain Glen) has miraculously recovered from his terminal greyscale overnight. He doesn’t name Sam (John Bradley) as the cause for his new health, but Archmaester Marwyn (Jim Broadbent) is no dummy. Jorah is cleared to return to the world of the living, determined to find his queen, and Sam is not exiled from the Citadel for disobeying orders. He does get penalized with a huge, nasty project of transcribing decaying texts, but he also earns the respect of his mentor for his healing abilities.

Also of note in this episode: Varys (Conleth Hill) and Melisandre (Carice van Houten) have a meet-up on a cliff overlooking Jon Snow’s arrival on Dragonstone. He questions her reluctance to greet the man she praised, and she confesses that things between her and the King in the North are tense because of many terrible mistakes on her part. Varys recommends that she leave Westeros and never come back, and she says she will leave, but that she’ll return one last time because she, like him, is fated to die in that country. Dun dun duuuun!

Let's celebrate Mother's Day with a few of our favorite comic book mothers!