Game of Thrones  opens on a dark and stormy night. It’s so dark, the lightning barely reveals our scene. Tyrion’s (Peter Dinklage) voice cracks through the silence. The team at Dragonstone huddle over a map. Daenerys (Emilia Clarke) seems a little shaky. She doesn’t like being trapped in Dragonstone, and is anxious to get moving again. Few scenes before this have witnessed all these characters on screen together, and the result is a fascinating character study. Like Sansa (Sophie Turner) up North, Daenerys shows just how much she’s grown as a leader and ruler as she verbally spars with the unshakable Lord Varys (Conleth Hill). He cooly looks her over, “I choose you…the people have no better chance than you”. However, Grey Worm (Jacob Anderson) enters, interrupting the moment. A Red Priestess has arrived…

The team exits the castle to find Melisandre (Carice Van Houten) waiting. They stand and talk. The famous prophecy once again comes up. It seems, there’s a fault in the translation. In fact, it should read, “The Prince or the Princess that is promised”. However, Melisndre recommends Daenerys reach out to Jon Snow (Kit Harington). He could prove useful. Daenerys seems won over as Tyrion quickly agrees. He is an excellent judge of character after all.

Related: Check out our Game of Thrones coverage, here. 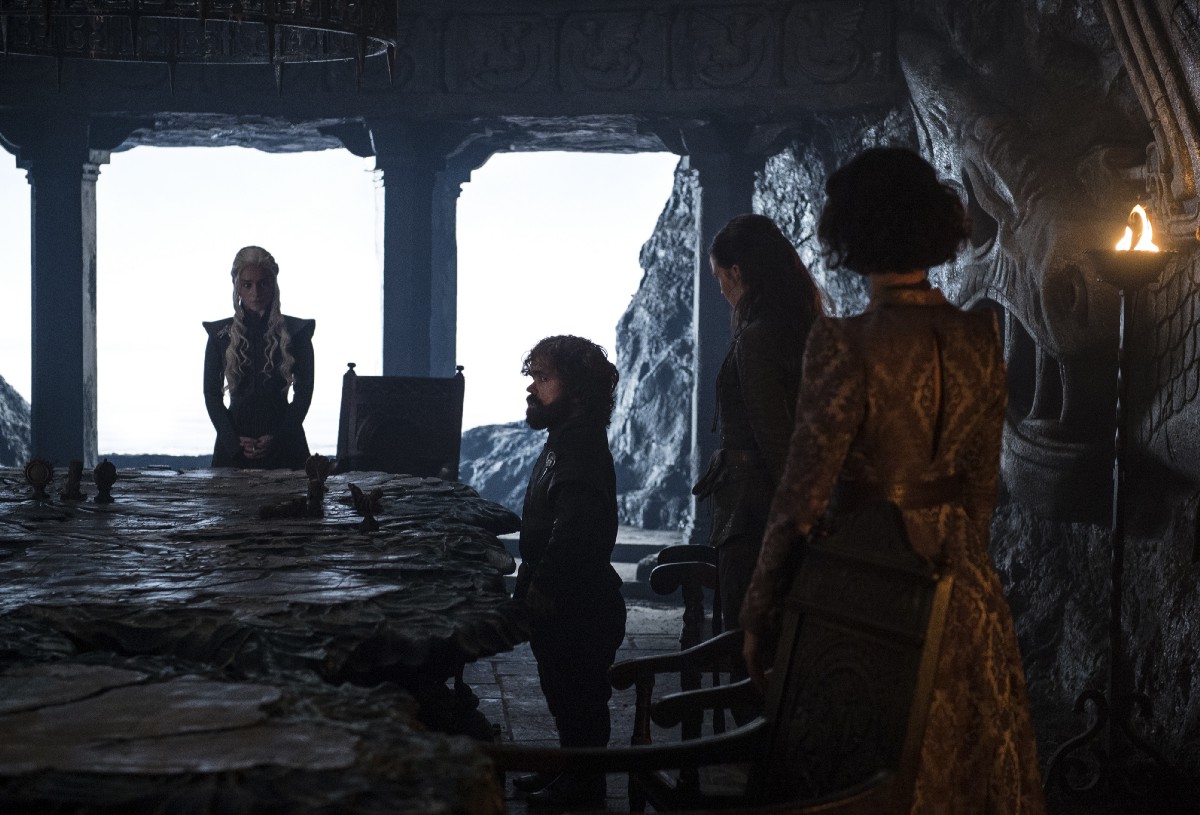 Meanwhile, Team Stark huddles up North with Ser Davos (Liam Cunningham). They stare at a roll of parchment, seemingly from Tyrion. While Jon is convinced of its source, Sansa isn’t so sure. Could this be a trap? However, Ser Davos brings up a stellar point. Fire kills white walkers… what breeds fire? Dragons.

Across Westeros, Cersei (Lena Headey) sits on her throne, as her Lords gather around her. There’s thinly veiled panic in the scene. Daenerys is coming fast, and will soon be on their shores. Not only this, but there’s growing fear of the ever awesome Olenna Tyrell (Diana Rigg) and the Dothrakis. For Kings Landing to stay safe, they need to work as a team.

Back at the Citadel, Ser Jorah (Iain Glenn) stands in his cell while Samwell (John Bradley) and Archmaester Ebrose (Jim Broadbent) hover near-by. His grayscale is progressing far quicker than they can work. Jorah’s disease is far beyond any modern medicine. Things don’t look good for the ever faithful knight.

Meanwhile, Cersei wanders through the basements of Kings Landing with Qyburn (Anton Lesser). They stop and stare at a dragon skull. It’s gigantic. Together, they talk about the creatures. However, it seems all hope isn’t lost. Dragons can be killed. He pulls a sheet, revealing a massive crossbow. 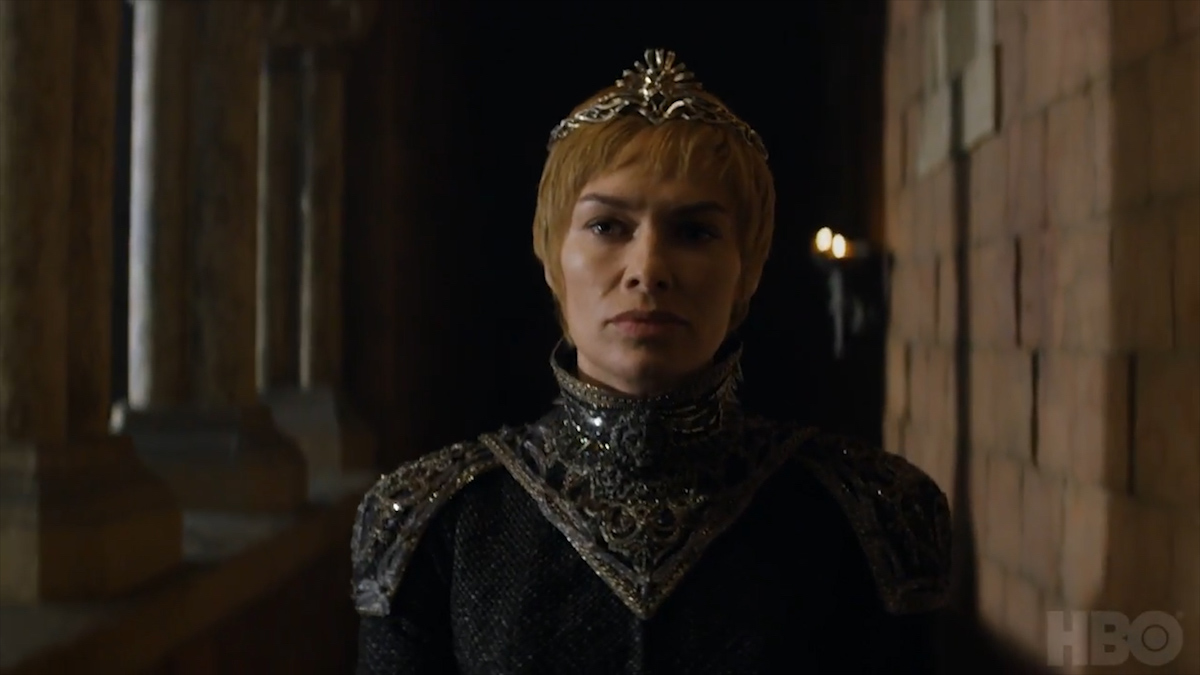 Later, Dragonstone grows ever more crowded. Ellaria Sand (Indira Varma), Olenna and the Greyjoy siblings (Alfie Allen and Gemma Whelan) have joined the party. As they talk, Daenerys unveils a plan to lay siege to Kings Landing. Cersei might have the Iron Throne, but they won’t have any food. Furthermore, while they are squeezing the life from Kings Landing, the Unsullied will be taking out Casterly Rock. The Lannisters will have no place to go.

While the groups split, Grey Worm and Missandei (Nathalie Emmanuel) talk quietly over their work. The couple’s relationship has been on a slow burn for a number of seasons, and their feelings for each other are only now poking through with battle looming. With emotion brimming in his eyes, Grey Worm admits to having fear. With both feeling at their most vulnerable, they kiss. However, there’s one small problem… Unsullied. When her hands drop to his pants, he stops her. There’s a tender moment as he finally lets her see him. They slowly drop into bed together.

Meanwhile, Samwell continues to show just how awesome he is, as he openly defies the Archmaester at the Citadel. It seems Samwell knows a cure for Grayscale, and he’s going to try to save Jorah. Despite the lack of support from his elders (the last man to try this procedure died of the disease), he resolves to give it a go anyway.

It seems the life-saving procedure involves the infected tissue being pulled from Jorah’s skin. Yes, we watch it. All of it.

Later, Arya (Maisie Williams) is back on the road. She stops at an inn, where she meets up with Hot Pie (Ben Hawkey). While they talk, Arya learns something she missed over the last season. Jon Snow is King in the North. The Bolton’s no longer have Winterfell. Suddenly, emotion creeps into Arya’s expression as she rides into the distance.

At the same time, Jon faces a restless crowd in front of him as Sansa watches nervously. There’s an outcry as Jon announces his intention to meet with Daenerys. Sansa, Lyanna Mormont (Bella Ramsey), everyone can’t believe what they are hearing. The King in the North must remain in the North. However, he’s leaving the North in good hands: Sansa’s. 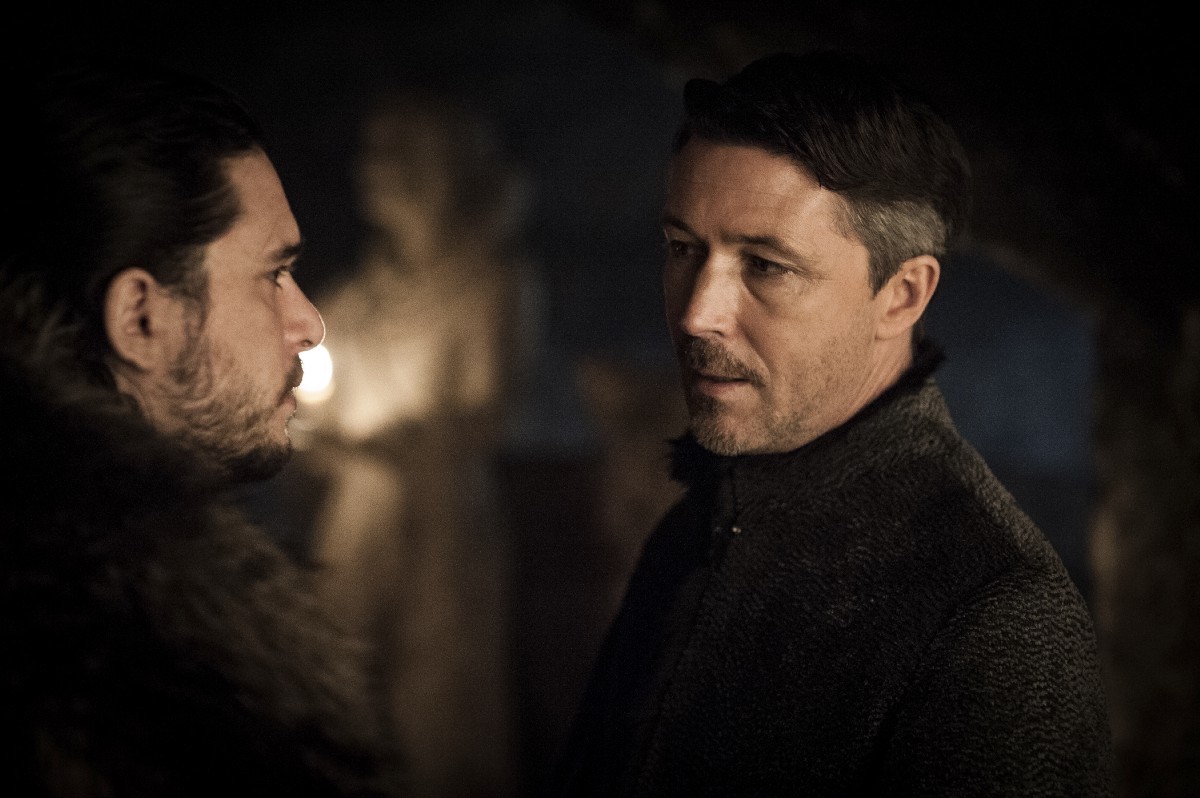 Later, Littlefinger (Aidan Gillen) and Jon finally have a chat. Restrained tension bubbles beneath their body language. Littlefinger smirks, “I love Sansa as I loved Cat”. Baelish barely can react as Jon runs at him. It seems Littlefinger is to keep his hands off Jon’s sister…

Meanwhile, Arya warms herself by a campfire. Her horse stands nearby, growing antsy. Arya jumps to her feet as there’s a crack deep in the bushes. Suddenly, wolfs surround her. She turns around as a gigantic direwolf creeps up behind her. Recognition crosses Arya’s face, Nymeria. Arya slowly approaches with her hand outsretched, “I’m going north, girl. I’m going home”. A look of recognition flashes across the wolf’s face. However, as Arya bids the animal to follow her, it turns away.

Down south, Ellaria talks quietly with Yara as Theon watches uncomfortably. There’s plenty of wine and the attraction grows between the two women. Ellaria looks up with a flirtacious smirk, “It seems a foreign invasion is underway”. However, before anything else can happen, there’s an explosion. They run outside. Uncle Euron (Pilou Asbaek) has reached their shores.  A massive ship quickly makes dock with their’s, and a bloody battle ensues.

While the fight escalates to a fiery (and bloody) conclusion, two of the Sand Snakes lay dead on the deck. Theon watches as Euron manages to overpower his sister. His uncle flashes him a taunting smile, “Come and get her”. However, when faced with the challenge, Reek takes over. Theon jumps overboard, as terror spreads across Yara’s face.

As the episode comes to a close, Theon floats in the water as the battle burns out around him.