Home » Stuff We Like » All the Rest » Game of Thrones: ‘Hold the Door’ Translated into 21 Different Languages

Game of Thrones: ‘Hold the Door’ Translated into 21 Different Languages 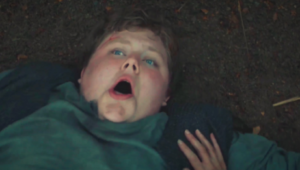 This is cool.  Entertainment Weekly found an industrious Imgur user who compiled for us all, 21 different takes on Hodor’s tragic final scene.

If you’re like me, and already jonsing for anything Game of Thrones, this is a really fun window into how other countries might have experienced the series.  It’s a special challenge to adapt your translation of the events and lines of a scene to match a character’s name.   This was such a pivotal scene, and it’s fascinating to see what language can do to it.

As EW’s Will Robinson notes in his article, ‘Some, like Dutch, were very similar (the phrase “houd de deur” translates to “hold the door”). The Polish version was a longer phrase that equated to “Hold the dead as long as you can,” but managed to condense into the word actor Kristian Nairn said over and over for six seasons.’  My personal favorite was the Italian, ‘Block the Horde’, which, to me,  makes the scene a new kind of chilling.