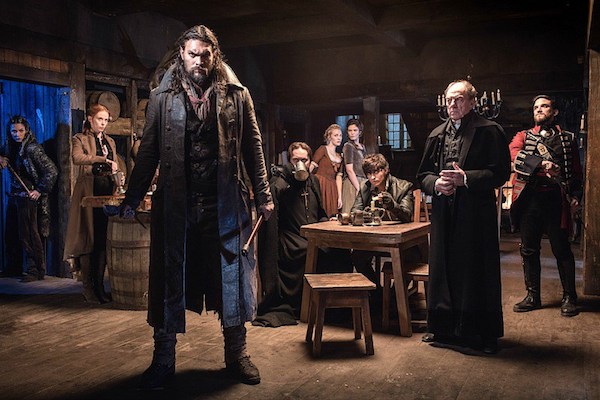 The Cast of Frontier

Our episode opens in Montreal, The three Brown brothers (Allan Hawco, Michael Patric and Stephen Lord) hover inside the offices of their trading company. Their conversation is heated. In fact, their business is struggling and they are quickly drowning in debt. As they talk, it seems their only option is to go north, and establish trade with the “Lake Walkers”, a prominent tribe in the area. The move has the potential to save their business.

Later, two Lake Walker boys play in the forest. However, the fun is short-lived as gunfire breaks out and one boy appears to be killed, while the other (Kitchi) is wounded. Traders from the Brown’s organization emerge from the woods. Sensing an opportunity, they pick up the unconscious Kitchi and quickly disappear.

Meanwhile, Coffin (Christian McKay) and Michael (Landon Liboiron) find themselves tied to posts while Harp (Jason Momoa) crouches near-by. The intimidating man slowly warms his knife over an open flame as he approaches Michael. He always does this when he’s about to skin a body. Declan leans in close, his knife hovering menacingly over Michael’s neck. Michael quickly confesses. He tells Harp everything about the deal with Benton and his girl back home. Suddenly, Harp crosses behind Michael’s post and cuts him free. His voice is quiet as he continues, “If you listen to Benton, your girl is as good as dead”.

At the same time, an uneasy alliance is forming between Captain Chesterfield (Evan Jonigkeit) and Grace Emberly (Zoe Boyle). They discuss rumors that Governor Treadwell will not long be in power for much longer. With a coy glance, Grace mentions her thought that Chesterfield would make a good Governor. However, he isn’t sure. What does she want in return?

As Chesterfield returns to Lord Benton (Alun Armstrong), the rumors about Governor Treadwell are coming true. Soldiers watch with restrained expressions while the Governor is hung. Later, Lord Benton stands next to the body, admonishing his troops. They have been embarrassed by Declan Harp long enough, and he wants Harp brought to him.

Meanwhile, one of Grace’s waitresses brings her back to the tavern’s storage room. Inside, she finds the the wounded Kitchi unconscious on her floor. Luckily, the boy survives through the night.

However, their secret is not safe for long, as Imogen (Diana Bentley) delivers word of the boy to Benton. Based on her intelligence, he sends Captain Chesterfield to investigate.

Chesterfield arrives on the scene and finds the wounded boy. As he tries to figure out what’s going on, Cedric Brown suddenly enters. Chesterfield stabs Brown repeatedly, killing him. Later, Chesterfield and Grace have a hushed conversation. Grace once again tries to sway him towards her proposed partnership, but Chesterfield quickly puts a stop to the topic. He looks around carefully, knowing there’s a mole somewhere in the tavern. Furthermore, if this news were to return to Benton, they would both be killed. Grace, however; already knows of the spy inside her organization. “I can handle her”. Meanwhile, they determine that the HBC will take custody of Kitchi.

Later, Grace jumps as Harp materializes in front of her and they quickly find some privacy to talk. As they turn to face each other, these two clearly have a history. Harp questions her, looking for any information she might have about Kitchi. Unfortunately, Grace hasn’t seen him since Benton’s men took him.

Meanwhile, Harp’s team soon have Kitchi located; however, the mansion where the HBC is keeping the boy seems almost impenetrable. Michael quickly jumps in. He offers to enter the house using his connections. Once the household falls asleep, he’ll let them inside. While the group is uneasy with the choice, it’s their only option. They have to let him go.

While Michael talks with Lord Benton, he struggles with his double agent status. The lines as to who to trust are beginning to blur.

However, Michael continues as planned and later brings Harp’s men into the house. They locate the boy, but a battle breaks-out as they try to escape. It’s a violent scene, as are most battles which involve tomahawks.

The next morning, the bloody remnants of the battle are all the remain as a stunned Benton looks around. Smyth is missing, as well as Chesterfield. At the moment, he’s loosing the battle and he’s not happy about it.

Later, Harp brings Kitchi back to his family. A heavy tone hangs over the meeting, as Harp lost many men in the battle. There are also intense political ramifications, as an unspoken fear of war hangs over the area.

Michael wakes up in the middle of the night. An icy wind howls outside. As he gets up, he hears something which doesn’t sound right. Entering another tent, he finds Kitchi gasping on the floor. His throat has been slit. Michael barely reacts before he is knocked out.

The first full season of Frontier is available on Netflix.

Netflix subscribers, what are your thoughts so far?