If you are like me, you’re probably sick of the current state of the political landscape. It exhausts me. So why in the world would I be intrigued with a board game about the forming of the U.S. Constitution? Maybe it’s the remnants of my political science major bleeding through, hoping I’ll glimpse a clue of how we got where we are today. Maybe it’s a desire to return to a seemingly simpler time, where names like Franklin, Hamilton, and Washington make me feel (somehow) safer. Or maybe it’s just morbid curiosity, wondering if someone could possibly make a game that makes this topic fun. Regardless of why, I took the plunge and picked up Founding Fathers, a game designed by Christian Leonhard and Jason Matthews and published by Jolly Roger Games. I gotta say, there’s something here that is more than the sum of its parts. 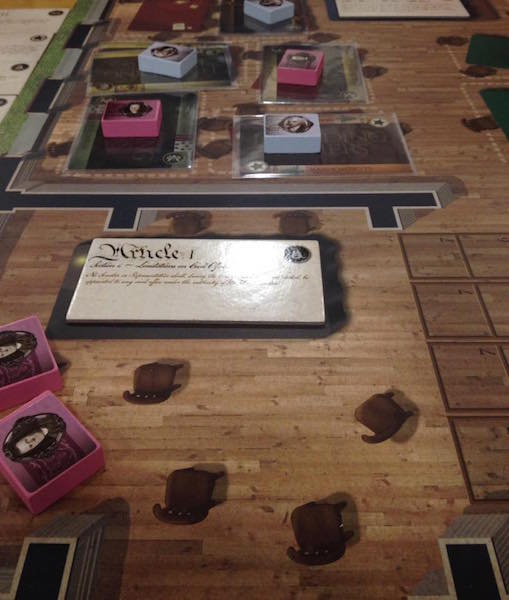 Designed for 3-5 players, with a 1 hour-ish playing time, Founding Fathers recreates the activities of the Constitutional Convention held in Philadelphia’s Independence Hall in 1787. Players take control of the 55 delegates from the states who participated in the convention and use them to influence which articles pass or fail, hoping to gain the most influence (victory points) over the final document. The delegates are represented by cards which have one of 4 different factions on them, Federalist, Anti-Federalist, Big States, and Small States. Each player starts the game with 3 marker tokens representing her founding father. These tokens will be used to score points for the player each round. 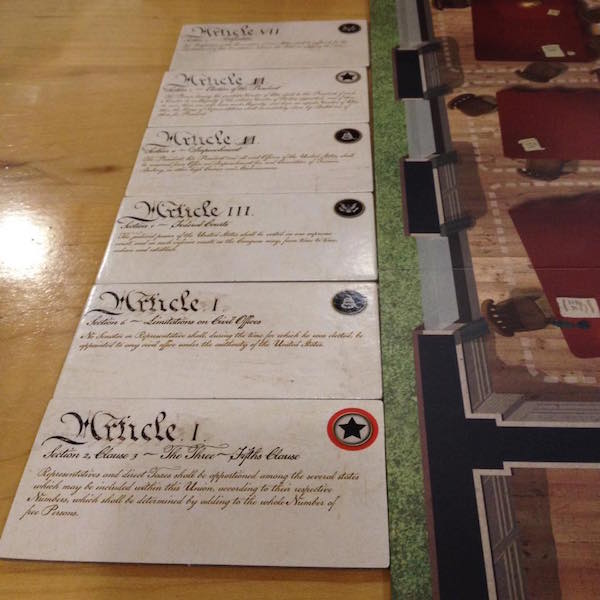 Each round, one new article is put to a vote in the assembly hall while another is placed in the committee room. Each of the articles displays the symbol of the faction who proposed that article historically. On her turn, a player will take a single action, using one or more of the 3 delegates in her hand to either debate, vote, or manipulate the vote. The first action a player can take is playing a card for its special ability. This breaks some of the voting and other rules of the game and adds a bit of “take that” to the mix. Each of the 55 delegates contains one of these abilities and they are intended to be based on historical traits of the actual delegates. The abilities not only influence the game play, but they also add a lot to the theme of Founding Fathers.

Another action that a player can take is to cast a vote. To vote, a player takes a delegate (or delegates) from a single state in her hand and places it (or them) on a yea or nay space in the assembly hall with one of that player’s markers placed on top of the cards. It’s pretty simple, with a just a few rules regarding how votes are cast. For instance, once a player casts a vote, that state has cast its vote and cannot vote again on this bill (unless a special ability dictates otherwise). Further, a delegate who belongs to a certain faction must vote (if he votes at all) for an article proposed by his faction or against an article proposed by his faction’s adversary – Federalist vs. Anti-Federalist or Big State vs. Small State. 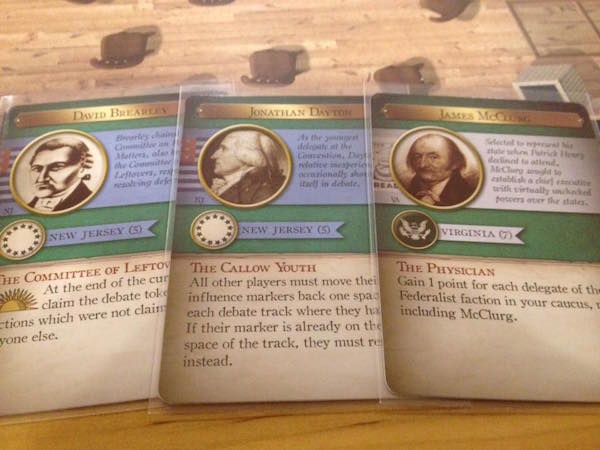 The third action a player can take is to discard a delegate, sending him to the debate floor. The debate floor is basically a score track that measures who is winning the debate for each of the 4 factions this round. Each time a player sends a delegate to debate, the player moves her token up the track matching the delegate’s faction. At the end of a round, whoever leads one of the 4 factions in debate gets a scoring token for that faction to score bonuses at the end of the game. Back in the assembly hall, once a vote gets either 7 yeas or 6 nays, it passes or fails accordingly, and the round ends. At the end of a round, each delegate who voted on the winning side earns 1 or 2 victory points for the player who played them. Players with delegates on the losing side of the vote have their losing delegates’ player markers placed in the committee room. At that moment, whoever has the majority of her player tokens in the committee room scores one point for each token there. That player gets her tokens back, but the losers’ markers remain in committee for the next round. 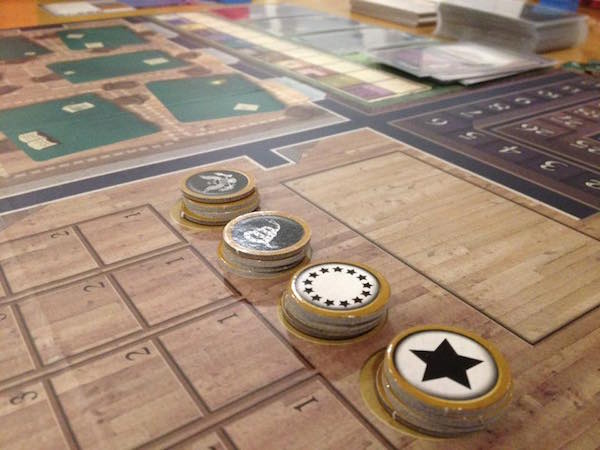 Both the article from the assembly hall and the one from the committee room are placed next to the board with one of its 2 symbols displayed. (The article cards are double sided, with the symbols of the opposing two factions on either side. If the article was historically a Big State article, it’s opposite side will have the Small State symbol). The committee room’s winner will choose which side of the article is placed face up on the side of the board. The assembly room’s article will be placed with the historical side up if passed and on the opposite side if it failed. The game ends after 4 rounds. At the end of the game, each player counts up their debate tokens. The players who have the most debate tokens of a faction will score bonus points based on how many articles of that faction passed. These points are added to the victory points each player scored over the 4 rounds of the game. The player with the most points wins.

There is a really good flow in Founding Fathers’ game play. There is little down time because each player only gets one action per turn. The theme surprisingly permeates throughout due to the game board (which accurately represents the layout of Independence Hall) and the clever use of the delegates’ special abilities. For instance, George Washington’s ability allows him to declare the vote finished, no matter how many votes have been cast. I could totally see Washington getting tired of all the debate and bloviating, and screaming, “Enough of this shite!” The historical touches the designers placed in Founding Fathers exhibits great love for the subject matter and really shines through. Mechanically, Founding Fathers is somewhat of a euro style game, with the card drawing being the only luck involved. It has a bit of a worker placement feel as well, because even though you can acquire new marker tokens as the game progresses, it seemed like there were never enough of them to let me be comfortable. I HAD to make difficult choices, and that provided some good tension. 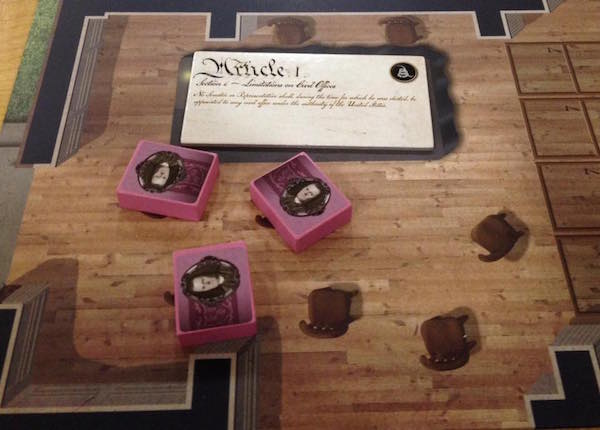 In the end, I am really glad I picked up Founding Fathers. I have had several friends, gamers and non-gamers, express interest in playing it. I think it is easy to teach, and the play time and player count could make this a go-to game for me. The subject matter and art definitely provide a curiosity factor for most people who see the box, and once I start explaining the rules and concept, it gets even stronger. I am looking forward to future plays because I think it will open up the strategic opportunities in the game. With only 55 delegates, you’d start to get familiar with which cards do what. This will make drawing cards at the end of your turn more meaningful, since all you can see are the backs the 3 cards that are available to you, with only the delegate’s state visible. So if you know there are only 3 delegates from a state, you might be able to make a more informed decision as to which card you might be drawing.

All in all, Founding Fathers provides a unique combination of game play and theme in a streamlined presentation. I encourage you to give it a try. Thanks for reading and keep nerding on!