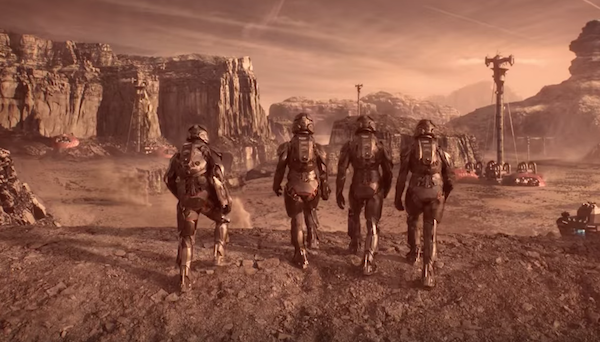 By the time Season 2 of The Expanse premieres on February 2nd it will have been a full calendar year (more or less) since we last saw this show air live. According to some guy on Reddit familiar with the tech of the Expanse universe, the transit time between Earth and Ceres station, with a 1G flip and burn, is about 2.5 days. That means the Rocinante could have made the trip 146 times since season one shuttered! That’s a long time for us to wait. I mean we at GGA love “The Expanse” and all (books and series), but we barely remember Jim Holden and his crew. If we saw them walking around the bazaar on Ceres Station we’d be all, “Do we know those people? Should we wave? No. It’s too awkward. Let’s get some tank-grown chicken curry instead and then go get high in a weird club with lots of blue up lighting.” But that’s okay. We were still stoked to see this new trailer, the second one for Season 2 thus far.

Watch the trailer and then we’ll give you some thoughts:

It doesn’t give much away, but we can glean a few things from its flickerings:

1) Holden and the crew of the Roci are going to be getting drawn into the political wranglings of the solar system. We hear Fred Johnson, the master of Tycho Station, telling Holden that he needs to “pick a side”. So there’s that. Hopefully this means the plot is thickening.

2) Back on Earth we see that Chrisjen Avisarala, still looking rad in her super cool sari, is dealing with the shenanigans at the U.N., so she’s still on the job. Looking forward to more deep, growly monologues from her that I have to rewind so I can catch all the words.

3) And we are finally going to meet Gunnery Sergeant Bobbie Draper of the Martian Marines! Fans of the books should be stoked about this, as Bobbie is probably the most badass character (aside from Amos) to join the series thus far. Fingers crossed that newcomer (to US TV anyway) Frankie Adams does her justice.

So strap yourselves in and let the flight meds take hold, as we flip and burn and decelerate to February’s big premiere. Can’t wait!