Last week’s episode of The Flash was a nail biter.  This week, Team Flash must find a way to save Wally.  The team investigates Alchemy and Caitlin takes matters into her own hands.  There was a big reveal this week…spoilers ahead.

Wally (Keiynan Lonsdale) is in a cocoon state after meeting Alchemy.  Barry aka The Flash (Grant Gustin) met the God of Speed, Savitar.  Savitar has Flash by the throat in the air as acolytes hold Joe (Jesse L. Martin) back from saving Flash. Joe breaks away, but he can’t see Savitar.  Alchemy gets away and leaves one acolyte behind.  Savitar proceeds to drag Flash around the city. 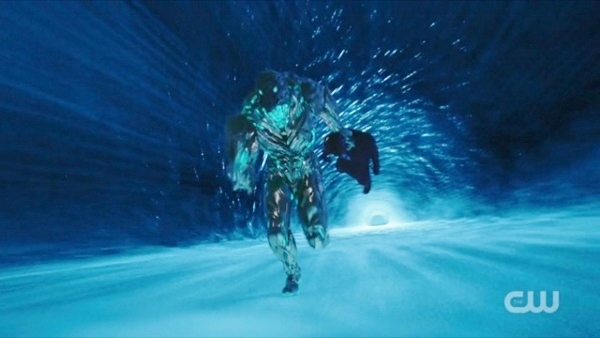 Cisco (Carlos Valdes) and the team watch as Flash appears in multiple places around the city. Savitar and Flash stops at the waterfront. HR (Tom Cavanagh) suggests that Caitlin (Danielle Panabaker) and Cisco rush to Flash to help fight whatever is attacking him.  Cisco opens a portal and the two jump through, but Caitlin cannot see Savitar.  Caitlin aims her powers towards Flash and freezes Savitar. Savitar breaks away from the ice and gets away.


Back at the lab, Joe and Iris (Candice Patton) watch over Wally’s cocoon as Caitlin exams everyone.  HR asks questions about the invisible force that had Barry and why he is the only one who can see it. Barry says it must be because he’s a speedster.  He doesn’t know much about the invisible force except his name is Savitar.  HR tells him that Savitar is the Hindu God of Motion.  They need to find out more information. 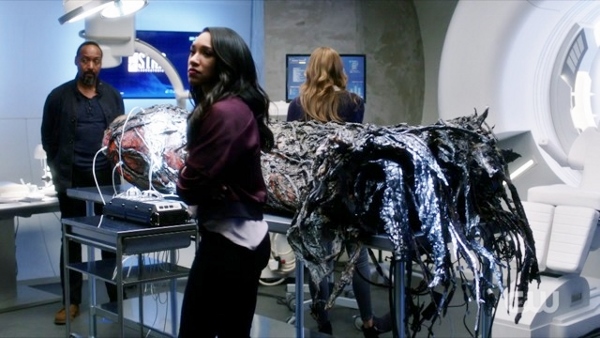 The team goes to check on Wally.  He is alive in his cocoon state.  Barry asks if they can cut Wally out.  Caitlin says cutting him out could hurt him. Joe is very frustrated and leaves.  Barry feels like it’s his fault that Wally is in that state.

Joe goes to the police station to question the captured acolyte. He asks about Alchemy.  The acolyte talks about judgment and the power of Alchemy.  Caitlin interrupts and tells Joe that Wally is awake and he’s fine.  Joe leaves to see Wally and Caitlin enters the room.

Caitlin transforms into Killer Frost ask about how to find Alchemy.  The acolyte continues to talk about Alchemy’s power and makes Caitlin mad.  The acolyte screams causing the police to rush to the room.  Caitlin gets out and runs into Julian (Tom Felton) .  She forces Julian to go with her. 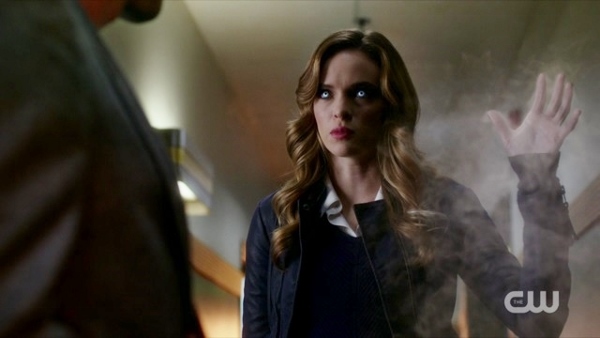 Julian knows who Caitlin is.  She tells him that she needs to find Alchemy. She makes Julian do a computer search for Savitar to find his acolytes.

Team Flash discuss a plan to find Caitlin and to help her from being identified as the attacker on the police station.  Cisco says she is Killer Frost.  He tells the team that her mother warned her about using her powers.  HR suggests they catch Caitlin the same way they caught Captain Cold. They use a satellite to scan for ultraviolet cold signatures. They find Caitlin at a frozen food warehouse.  Barry rushes off to stop her.

Julian finds two people who searched for the name Savitar.  As Caitlin figures out her next move,  Julian takes the opportunity to contact CCPD to let him know where he is.  Caitlin catches him and threatens to freeze him to death.  Flash rushes in and stops her.  Julian insists that Flash take her out. Flash knocks out Julian instead. 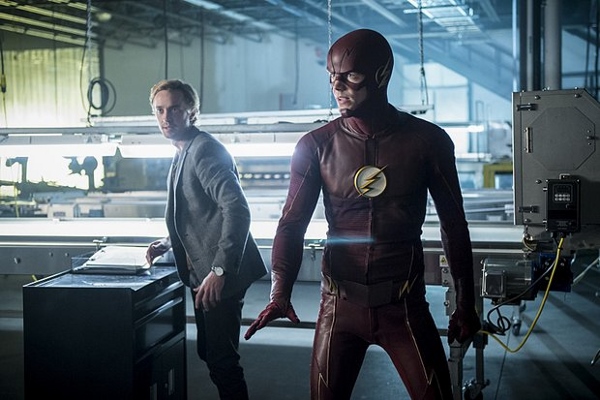 Caitlin tells Flash she needs Alchemy to take away her powers.  Flash tells her that the team will help her.  Killer Frost is mean.  She tells Cisco that Barry killed his brother when he tried to fix Flashpoint.  The police arrive and begin to shoot at Caitlin. Flash gets her to safety.  Caitlin freezes his ankle and leaves, telling him not to follow her.

Back at the lab, Barry tries to deal with Cisco and the truth about his brother.  Cisco doesn’t want to deal with Barry because he wants to find Caitlin.  They have the list of acolytes that Caitlin got from Julian.  Cisco goes to one and HR and Joe go to the other.

Caitlin confronts an acolyte about Alchemy. She asks if Alchemy can take away her powers.  The acolyte says he can, but Alchemy is an acolyte as well.  They all serve Savitar and Savitar has shown them the future. He says that he saw her with them in the future.  Savitar has special plans for her as Killer Frost. 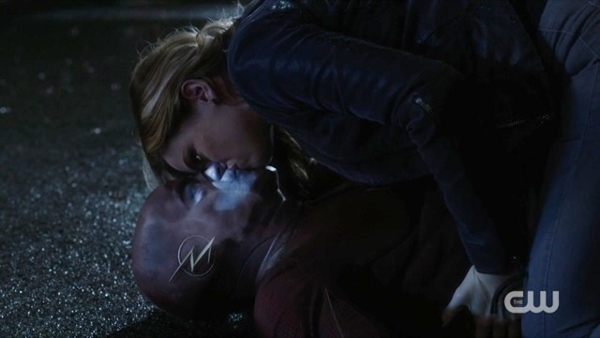 Cisco shows up and Killer Frost attacks him.  Flash stops Killer Frost’s attack, but she turns the tables on him.  Killer Frost kisses Flash, freezing him.  Cisco uses his vibe to throw Killer Frost off of Flash.

Back at STAR Labs, Killer Frost is locked up in the pipeline.  She tries to tell them she is okay, but the team doesn’t buy it.  Barry tells her that Alchemy can’t help her.  Killer Frost talks about how people who Barry has tried to help have died.  Killer Frost asks them to let her go and she will leave them alone.  Barry knows that she is not Caitlin.  He wants to help her.  She tells him that he made her this way. 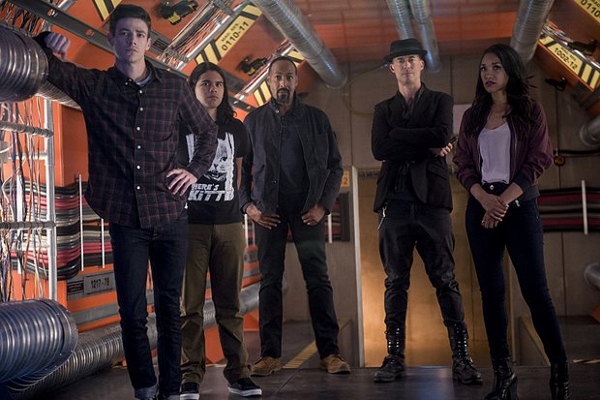 Barry feels bad for the bad things he has caused by altering the timeline.  Iris tells him that he didn’t know that this would happen in this timeline or in any other timeline.  She tells him to stop thinking about the what ifs and focus on now. The team needs the Flash.

Joe is so frustrated and helpless that he asks HR to help him get Wally out of the cocoon.  The team finds Joe trying to cut open the cocoon.  An explosion happens and Wally is standing, vibrating in the middle of the lab.  He looks at everyone and takes off.

The team is trying to figure out where Wally is and if he is okay.  His biochemistry is off.  Barry says they need a biochemist to help him.  Barry goes to talk to Caitlin. He says they need her and he opens the door.  Barry tells her that she is free to go only if she can kill him.  Killer Frost prepares to kill Barry.  Caitlin cannot kill Barry.  She returns and apologizes to Barry. 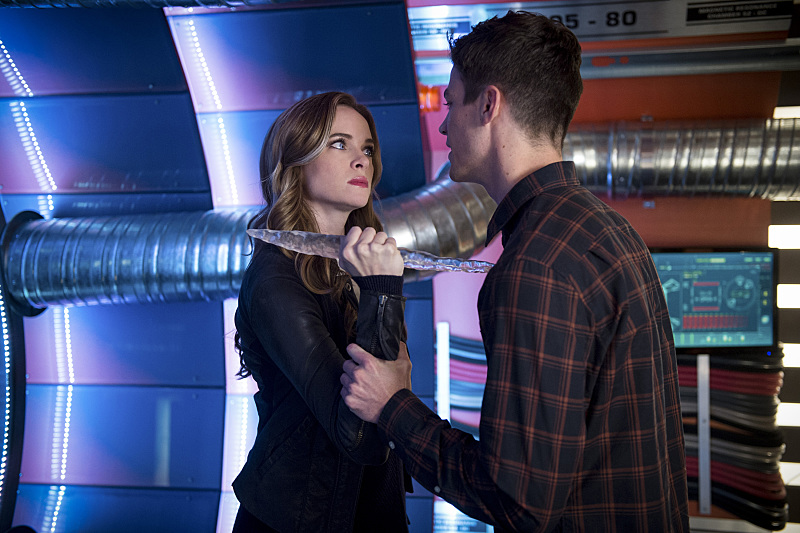 Caitlin helps to determine what’s wrong with Wally.  His mind is not running at the same speed as his body.  Caitlin synthesizes a nero-compound that will balance him.  HR asks Joe where Wally would have gone to.  Joe remembers that Wally visits the house where he grew up when he misses his mom.

They find Wally standing outside the house, vibrating.  Barry speeds by to inject the nero-compound into Wally.  Wally collapses and they return to STAR labs. 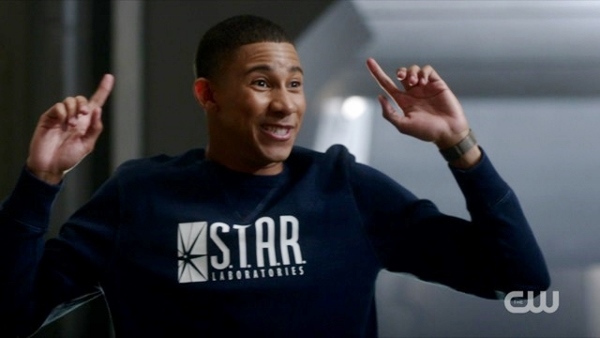 Wally loves being a speedster. He cannot wait to go out and help Barry.  Joe asks Caitlin to run every test she knows to make sure that Wally is healthy.  Joe gets a text that Julian is awake at the hospital.  Before Barry leaves, he talks to Cisco.

Cisco doesn’t want to talk.  Barry asks if they are going to be okay.  Cisco says he doesn’t know.  Barry has to accept that and leave him alone.

At the hospital, Julian tells Barry that Caitlin is the meta who kidnapped him.  Barry insist that Caitlin is a good person. He pleads with Julian to not turn Caitlin in, telling Julian he will do anything. Julian says he doesn’t remember who kidnapped him.  Julian then asks Barry to quit the lab.  If Barry stays, Julian will turn in Caitlin  He tells Barry that his moral compass is broken.  And Julian refuses to work with him.

Joe and Iris find Barry at the lab, cleaning out his desk. He tells them that it was the deal he made with Julian.  Iris is upset, but Barry says he’s okay with it.

At the hospital, Julian hears a voice talking to him.  The voice tells him it’s time.  Julian runs away, but is cut off by Savitar. Savitar tells him to become Alchemy and together they will bring Savitar back to rule!  Julian is Alchemy!!!!!!! 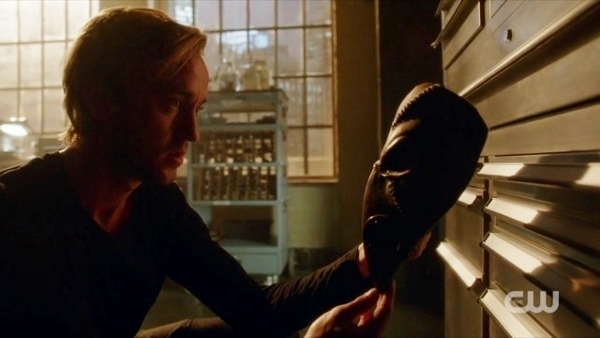 I knew Julian was Alchemy after last week’s episode!  I KNEW IT!

I’m so glad Caitlin is learning to control her powers.  She is so powerful, I hope she finds a way to be good and powerful.

This thing between Cisco and Barry is sad. They are best friends.  Cisco is so different this season because of his brother’s death.  I’m not used to seeing him so depressed.  =(

Wally is a speedster, but he was given his powers by Alchemy.  That means that Alchemy and Savitar will be coming for Wally to serve them.

We’re seven episodes in and all we know about the enemy is that he is supposedly a god.  His servants are people who had powers in Flashpoint. So that means that Savitar can cross between dimensions and timelines.  So…is Savitar after Barry because he also crossed timelines?  Did Barry release Savitar when he left Flashpoint? Is Savitar that dementor looking thing in the speedforce?

Next week is Crossover Week!!!! I’m really excited. Check out the Supergirl Recaps for what’s going on with the Girl of Steel leading to the big week!