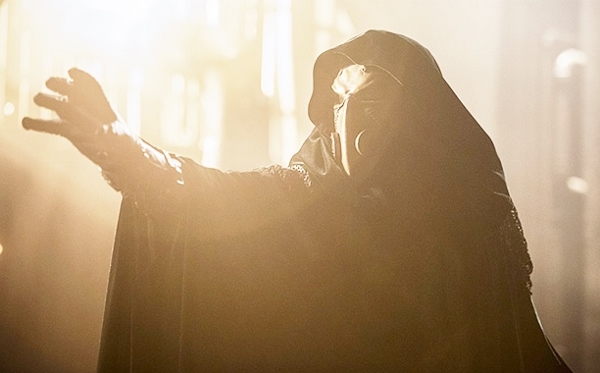 When Jesse (Violett Beane) revealed that she had become a speedster, no one was happier, or more jealous than Wally (Keiynan Lonsdale).  Wally is excited for Jesse. Wally sits on the sidelines watching Barry save the day.  So when Jesse gets her powers, Wally wants to be a superhero more than ever. 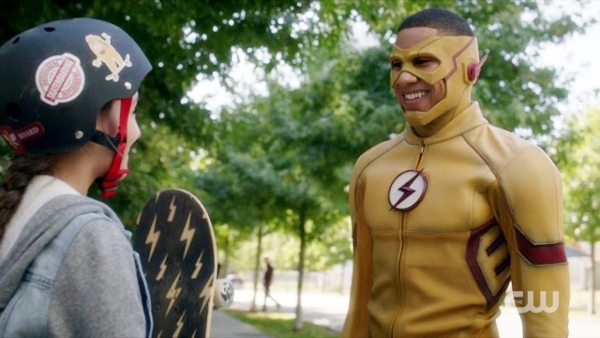 Wally has been having dreams of another life.  In those dreams, he is a speedster.  He is a hero.  His name is Kid Flash.  Wally really likes the idea of being a superhero.  Joe (Jesse L. Martin) on the other hand, is not so excited.

Wally’s dreams are happening the same way that Magenta’s did.  Joe is scared that Alchemy is causing Wally’s dreams.  Wally insists that he is getting powers the same way that Jesse got hers.  They were both hit with dark matter from the particle accelerator explosion.  Joe is not so sure.  He tells Barry (Grant Gustin) about the dreams and Barry is just as worried.

Barry tells the West family about Wally’s role as Kid Flash in Flashpoint. Joe is even more worried.  Wally is so sure that he will not be like The Rival and Magenta. When Wally starts hearing Alchemy in his head, that’s when the team decides it might be best to put Wally in the pipeline. 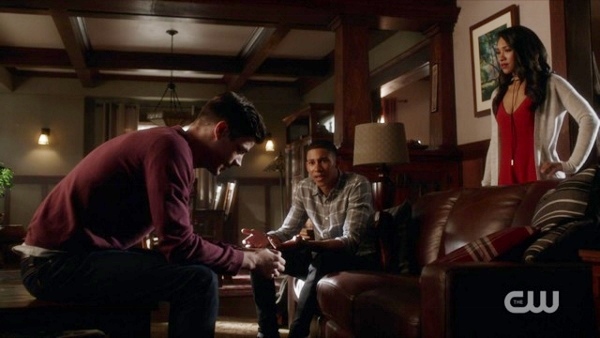 Joe has other things going on…like a date with Cecile(Danielle Nicolet). Wally and Iris (Candice Patton) are both excited for him. They won’t let him cancel because of what’s going on with Wally.

Julian (Tom Felton) has returned to being cold towards Barry, especially after Cecile tells Barry that he’s been appointed to the metahuman crime lab on full time status.  The lab has six husks now, indicating there are at least three more metahumans out there that Alchemy has turned.

A new metahuman, Shade appears in Star City.  Shade vibrates as high enough frequency that he looks like a shadow.  Shade has murdered someone and it was caught on camera.  There is no motive and no evidence to find out who he is.  So the team doesn’t know if he is working with Alchemy or if he got his powers from the explosion. 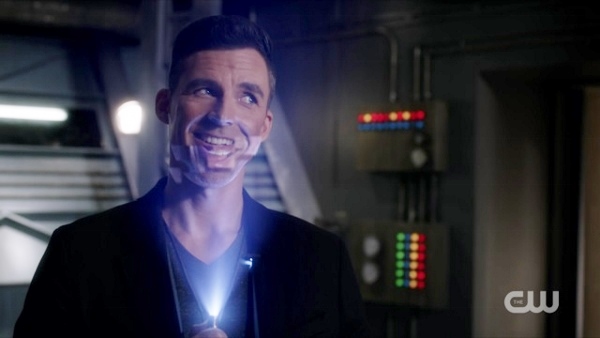 HR (Tom Cavanagh)  proposes that he become the face of STAR Labs Museum.  There’s just one problem.  His face is the face of a killer.  The Reverse Flash Harrison Wells confessed to killing Barry’s mother. HR cannot leave the lab or someone will recognize him.  HR has some sort of face changing technology from Earth 19 that allows him to leave the lab in disguise. 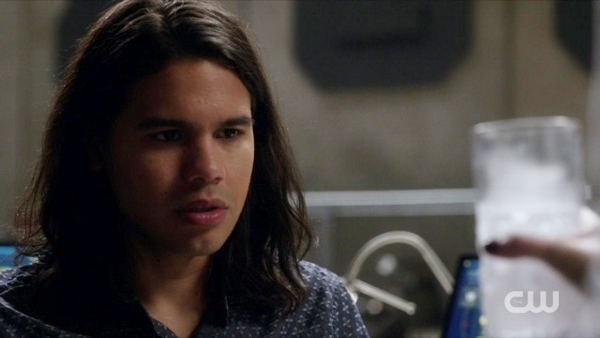 Caitlin (Danielle Panabaker)  reveals to Cisco (Carlos Valdes)  that she has powers. She asks Cisco to vibe her future and tell her whether or not she will become Killer Frost.  Cisco sees himself in a battle…against Killer Frost. He doesn’t tell Caitlin that though.  He tells her that she is fine.  She asks him not to tell the team just yet.

Wally is locked up in the pipeline for his own safety.  Barry and Iris watch over him.   They discuss how it feels to watch Barry save the world.  Iris and Wally know that there’s not much they can do to help.  And they both really want to help Barry.

The rest of the team are at the movies with Joe.  HR tags along as well and hijacks Joe’s date.  While at the movies, Shade appears and Barry is called to duty.

Barry shows up and Shade gets the best of him. Cisco, Caitlin and HR get into their van to use their mobile lab to help Barry. They light up the night with the headlights of cars. The lights slow down Shade’s molecular vibration making him easy to catch. Caitlin takes the power cuffs to Barry so he can keep Shade from transforming. 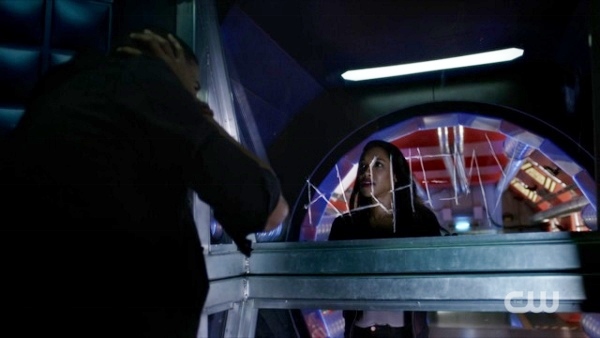 While Team Flash deals with Shade, Wally’s pain increases.  He hears Alchemy telling him it’s time to restore his powers. He tells Wally to find him and he will end his suffering. Wally gets very violent and yells at Iris to let him out. He is in so much pain and cries out to Iris for help.  Iris opens the door.  Wally pushes her aside, telling her to stay out of his way. Iris has to hit him to stop him from leaving.

The team thinks that Shade was a distraction so Alchemy could get to Wally.  No matter how safe they think Wally is, Alchemy will keep coming for him.  And there are at least three other metahumans that could come at the Flash to distract the team.  They cannot ignore Alchemy. They have to face him.

Cisco takes the opportunity to make Caitlin reveal her powers.  Caitlin is angry with Cisco for telling her secret.  She is upset that she is turning evil and will have to leave the team. Barry apologizes to Caitlin for changing the timeline.  He believes that he is the reason for Wally’s troubles, Caitlin’s powers, and a lot of other things that are different now. 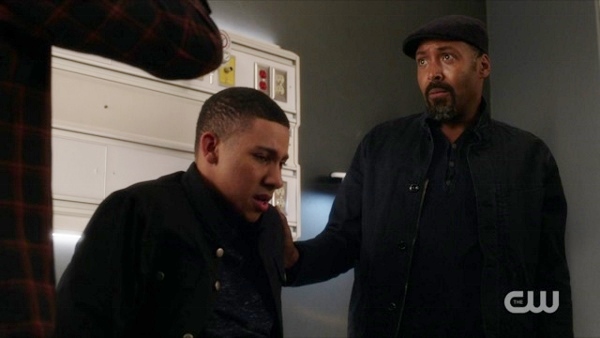 Wally wakes up and says Alchemy is calling to him. He tells the team to let him go and follow him to Alchemy. If they don’t, Wally will continue to suffer in pain that could cause brain damage. Joe decides to call in the force to help him protect Wally.  Joe makes an observation that Julian did not check into work that day. (Hmmmmmmmmm….)

Caitlin apologizes to Cisco for yelling at him.  She tells him what her mother told her.  If Caitlin keeps using her powers, it will be impossible to stop.  Cisco tells her that they are experts at the impossible.  He assures here that they will help Caitlin.

Wally leads the team to Alchemy and his metahumans. Wally approaches him first.  Alchemy tells Wally he can give his powers back to Wally. Wally says he just wants the pain to stop.  Whatever Wally wants, Alchemy will give it to him. 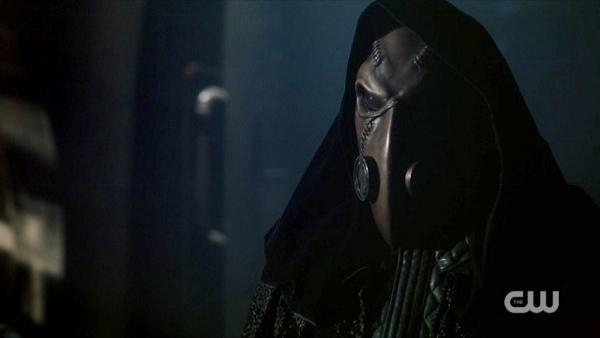 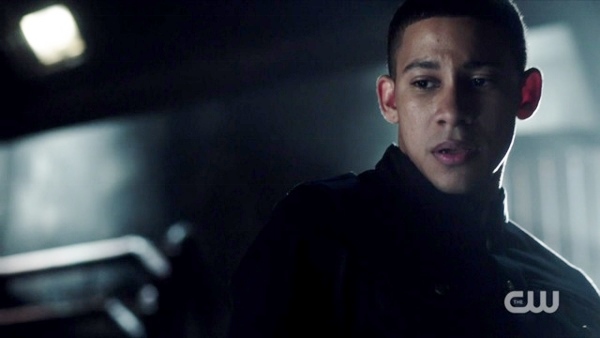 Barry sees someone on running around the room, releasing the metahumans, and taking out the police. He tells Wally and Joe to leave, but they are cut off from the exit.  Wally hears Alchemy telling him to take his destiny.  Wally sees the stone and picks it up.  He gets wrapped up in a cocoon. 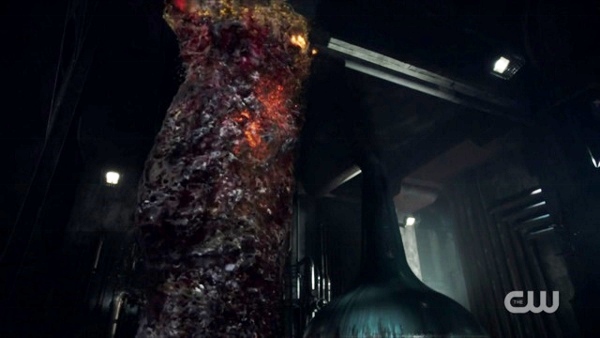 Alchemy attacks Barry.  Joe sees Barry pinned to the ceiling, but he cannot see who or what is holding Barry there.  Flash can see him and he asks who he is.  Alchemy is Savitar, the God of Speed. 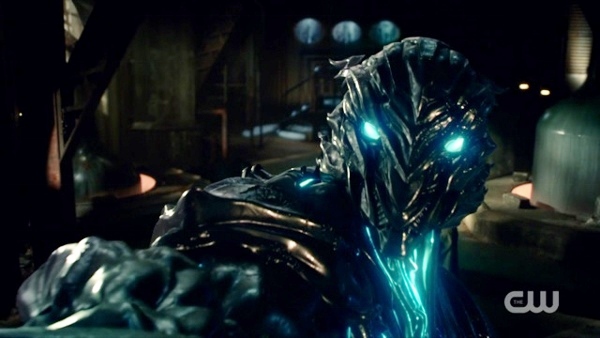 Wow! That got really intense in the end.  I seriously thought Julian was going to be Alchemy.  Julian is up to something though…I’ve got my eye on him.

“With great power comes great responsibility.”  Wally is definitely up for the responsibility.  What consequences will he have to face for getting his wish?  So far all of Alchemy’s metahumans have been villains. Will Wally turn evil?

Caitlin will, but I believe she can fight it. I always felt like Killer Frost was evil because she felt jilted in some way. Caitlin has definitely been jilted, but she has always been so humble.  I just don’t see her being full time evil.  I’m glad we don’t have to wait long to find out.  Next week’s episode will give answers to Caitlin’s destiny.

Ok. Savitar, the God of Speed. I don’t know much about this guy, but he reminds me of reverse flash.  Just out to get more power and get it from Barry.  Did Barry release him into his world? Or was Savitar always there?  And because Barry messed up the timeline, did Savitar come forth to make him pay?  Just my opinion, but reverse flash is doing far worse damage than Barry is. Have you seen Legends of Tomorrow?   This has to be the lead into the four-way crossover coming up in a couple of weeks.

If you have been watching Supergirl, The Flash, Arrow, and Legends of Tomorrow, there is still time to catch up on this season.  I’ll be watching! And I’ll do my best to get all the little details together for the big crossover week.  It’s exciting y’all !