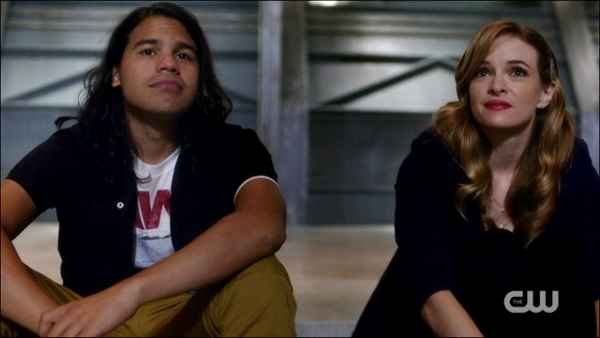 Team Flash has a new Harrison Wells on the team.  Caitlin searches for answers about her newly found powers.  Barry attempts to build on his work relationship with Julian.

So let’s get started.

Caitlin (Danielle Panabaker) has been hiding her frosty powers from everyone.  Caitlin’s mother, Dr. Carla Tannhauser who is a successful biomedical researcher.   Caitlin asks for her help to test her powers.  Their relationship is just as cold as Caitlin’s abilities.  Caitlin moved away after her father died.  She hasn’t spoken to her mother in three years.  Caitlin tells her mother that she became distant.  Carla tells Caitlin that she has no idea what Carla was going through. Caitlin says she does because her husband died a year ago. 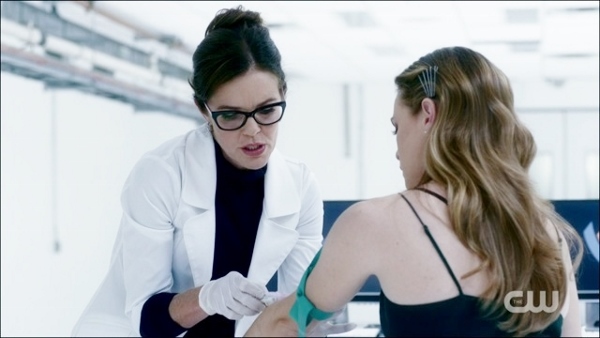 HR (Tom Cavanagh) tries his best to make a good impression on his first day with the team.  Cisco (Carlos Valdes) is having a hard time accepting HR.   This version of Harrison Wells is hyper and a little off putting.  Cisco tells HR to watch the team operates before trying to jump in.  HR can’t seem to sit still when a monster attacks Central City. Cisco is so annoyed with HR.  He leaves to take a break and tells HR to stay behind.  Once Cisco is gone, HR speaks into some kind of recorder and says that no one suspects why he is really in Earth 1. 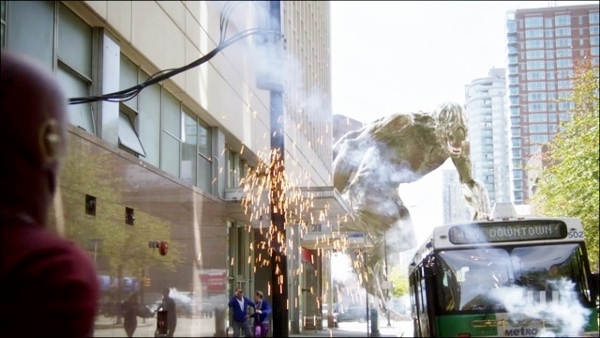 Team Flash is baffled about where the monster came from and how to contain it.  The monster disappears as quickly as it appears.  Barry (Grant Gustin) must turn to Julian Alpert (Tom Felton)  for help on this one.  Julian is very resentful of Barry. He reports Barry’s conduct to the captain. The captain acknowledges Julian’s complaint and tells Barry to do a better job.  Julian hates that the captain let Barry off the hook. Barry decides to try to get along with Julian. Barry asks Julian to train him.  And if Barry cannot put forth better work, he offers to leave the lab.  Julian accepts his deal.

Iris (Candice Patton) visits Barry at work with lunch.  She encourages him to continue to work on getting along with Julian.  Julian calls Barry to a scene he is investigating and the monster returns.  Julian attempts to shoot the monster. An energy surge is shot back at him.  Barry saves Julian from being hit by an electric sign. 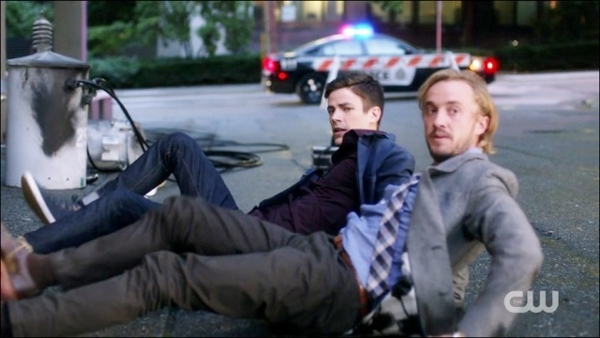 Julian and Barry discuss the monster and how transformers are blown out. The monster is feeding off of electricity.  Barry asks Julian why he hates metas so much.  Julian says they incite fear, commit crimes and are wasting their abilities.  Julian says he would help people and improve the world if he had powers.  Barry defends the metas saying that they had a major change in their lives.  They have to learn to adjust to their new identities. Julian gets angry and ends their deal to train Barry.

Carla’s assistant Nigel is talking to Caitlin about the tests that they ran.  Caitlin says that they found the same results that she found.  She is trying to get something from her mother that she will never get.  Caitlin decides to go home.  Nigel locks the doors and attempts to kidnap Caitlin.  He wants to use Caitlin’s abilities to do research of his own and get away from Carla.  Caitlin transforms and saves herself.  Carla has to talk Caitlin down to save Nigel.  Carla apologizes for not being a better mother to Caitlin.  They hug and Caitlin goes home.

Barry is trying to talk to Cisco about the monster. HR does his best to  add to the conversation.  He is repeating everything that Barry and Cisco says.  Barry suggests that Cisco vibe HR Cisco goes through HR’s stuff.  HR catches them.  He explains that he is writing a novel.  He’s a scientist and a novelist. Caitlin appears to hear them talking about having trust in each other.  The meta alarm goes off and they head for the lab.

Iris talks to Joe(Jesse L. Martin) about Cecile, the DA.  Iris encourages Joe to go out with her.  She insists that Joe’s kids are all okay.  Joe avoids the conversation saying he has everything he needs to be happy.  Iris says she wants him to have someone like she does.   They are interrupted by the captain who tells Joe to get ready to go after the monster.  Julian thinks he may have figured out the monster’s next appearance. 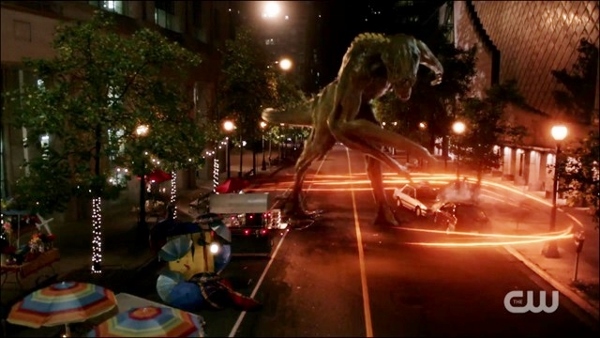 Flash races to the promenade just as the monster appears.  Cisco tells Barry to trip the monster just like in Empire Strikes Back.  Barry uses his Jedi inspired tactic to quickly wrap a rope around the monster’s legs.  It walks right through the rope.  The monster is a hologram.  Barry has to stop the police’s attack on the monster to avoid any lost lives.

Cisco is trying his best to work with HR to help Barry stop the police.  HR cannot work the computer nor does have any idea about how to stop the monster.  Cisco realizes that HR is not a scientist.  He can barely operate a computer.

Julian is not with the CCPD.  Barry finds him just as he has discharged his gun.  Barry stops the bullet. Julian discovers that the person controlling the monster is just a kid.  Flash hands the kid over to Julian to take to jail.  Julian thanks Flash.

Joe talks to the kid. The kid is bullied and scared. He wanted people to know how he feels everyday.  Joe tells him that things will get better.  The kid will have to face the consequences of his actions though. 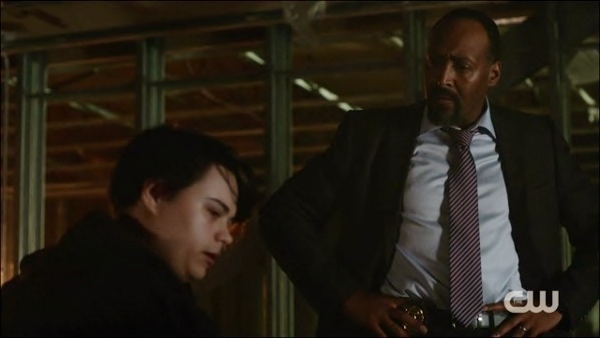 Team Flash confronts HR about lying to them.  He is an idea man and the face of STAR Labs on his earth.  He was exposed as a fraud and lost everything.  When he received their message, HR thought it was a chance to write about his adventures on Earth 1.  HR tries to appeal to their sympathy.  Wally (Keiynan Lonsdale) says he’s a con man.  HR says he has some great ideas that they could use.  Barry lets him stay to try and prove his worth to the team. 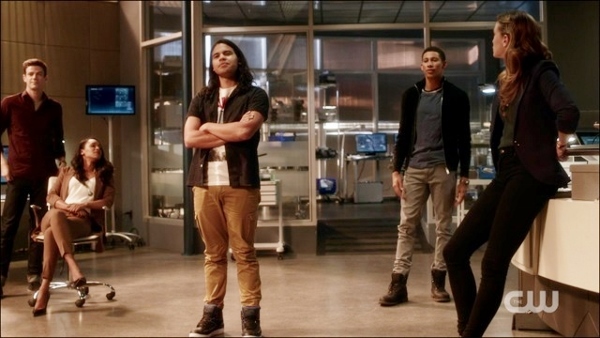 Barry returns to the lab. Julian tells him that he almost killed a kid. Flash saved him from killing a 15 year old boy.  Julian tells Barry that he can empathize with the kid and feeling powerless. He came to American to become a scientist.  Julian got to the top of his field and meta humans showed up.  He knows nothing about them and that’s why he hates them.   Barry tells him that change happens.  It can bring good things and new friends.  He just has to trust that everything will be okay.  Julian tells Barry that he doesn’t have to leave.  He admits he was wrong about the Flash. Julian thinks he could be wrong about Barry as well.  Barry invites Julian for a drink and Julian accepts.

Caitlin’s situation seems to be getting worse.  Her mother sends her a message telling her that her body chemistry is changing. Carla doesn’t understand the reasons. Carla advises Caitlin not to use her powers under any circumstances. Caitlin reacts by freezing the table and her monitor. 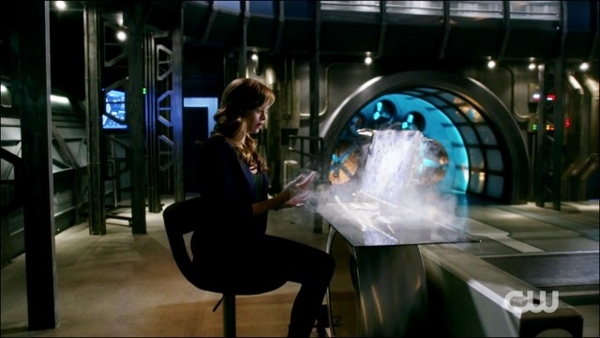 Okay…so I’m glad that Barry and Julian were able to find some sort of common ground.  I love snotty Tom Felton, but you know he’s a big softy. We need to see his softer side.

I felt like this was just a filler episode.  There should have been more focus on Caitlin’s journey to Killer Frost.  It’s moving a little slow for me.  I know, I know…there’s a plan.  I just can’t wait to see it come to fruition.

HR! OMG! I’m with Cisco on this one. HR was so annoying. And we all know, secrets don’t make friends.  This Harrison Wells is not a scientific genius.  That is interesting to watch, but I really wanted him to shut up! I really hope he finds a way to fit in and control his hyperactive mannerisms.