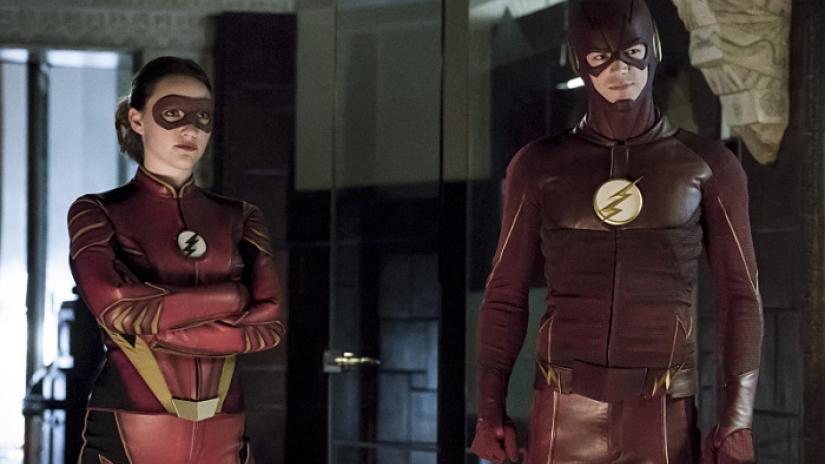 Team Flash is challenged by Mirror Master and Top.  Jesse Quick struggles to control her powers. And Barry is uncomfortable expressing himself to Iris in front of Joe.  Whoa!

On the night that the particle accelerator exploded, Sam Scudder (Grey Damon) and his girlfriend Rosalind Dillion (Ashley Rickards) are working for Leonard Snart (Wentworth Miller).  Snart is upset that they have been spending his money.  A fight ensues, but ends when the blast hits the building.  Rosalind is thrown, but Scudder disappears. 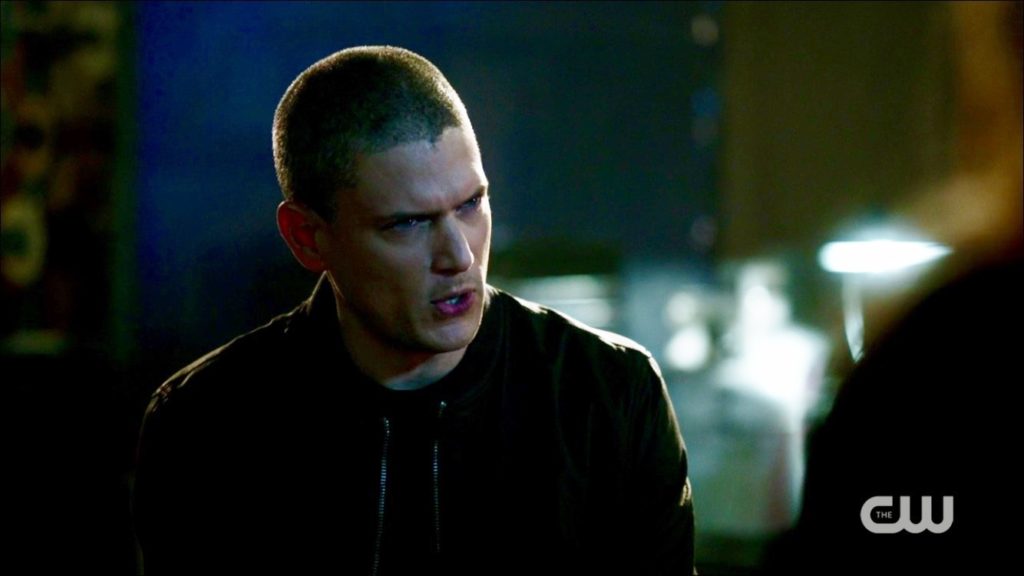 Back to the present day…A demolition team is clearing out the space previously occupied by Scudder and Rosalind.  Scudder appears out of a mirror demanding to see Snart.  Later he visits an old friend to find out that Snart has left the city and Rosalind is in jail. 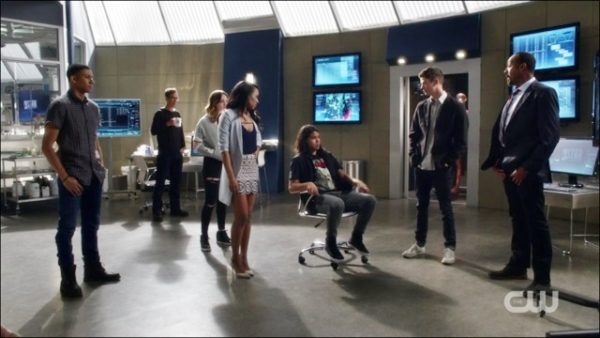 Barry (Grant Gustin) and Joe (Jesse L. Martin) share their intel on what happened to Edward Clariss, but Julian Alpert (Tom Felton)  is not disclosing any information about the official investigation.  So while they wait for Joe to find something out, Jesse (Violett Beane) continues her training with the Flash.

The Flash is no longer the student…he is now the teacher.  Jesse is having a little trouble maintaining her balance, so Harrison decides they need to stay a little while longer.

Jesse takes full advantage of the extra time with Wally (Keiynan Lonsdale) which leads to a kiss.  Wally is hesitant about taking their friendship to the next level because Jesse will be returning to Earth 2 soon.  So they decide to remain friends. 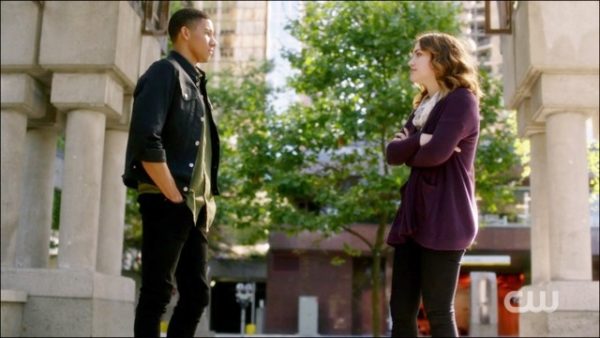 While Jesse is running around with Wally, Barry, Caitlin (Danielle Panabaker) and Cisco (Carlos Valdes) ask Harry if he really has to leave. He says he still has a lot to fix on his Earth. They tell him that their team doesn’t feel complete without Harrison Wells. He suggests that they get another Harrison Wells from the multi-verse.

Joe and his friend Cecile (Danielle Nicolet) from the DA’s office are working on the Alchemy case. She is flirting with Joe and offers to help any time he needs it. 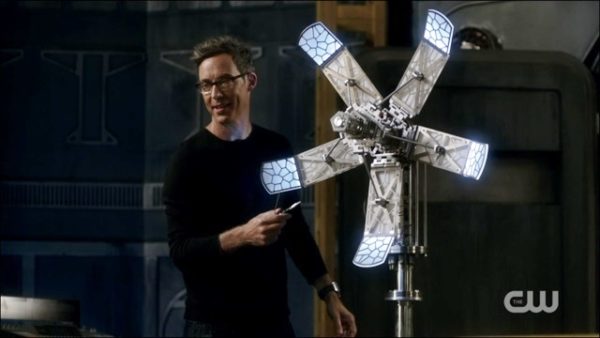 Harry is setting up a satellite that will send a cryptogram with a laser burst to other Earths with the advanced technology to receive it. (Ugh…Science)  They get a few weird responses and Harry doesn’t like any of them.  Maybe because he doesn’t like the idea of being replaced in the group.

Barry and Iris (Candice Patton) are having a romantic night at home until Joe comes home. Barry gets really awkward when Joe is around. Iris hates that Barry is uncomfortable so she suggests that Barry talk to Joe to make sure he is okay with their relationship. 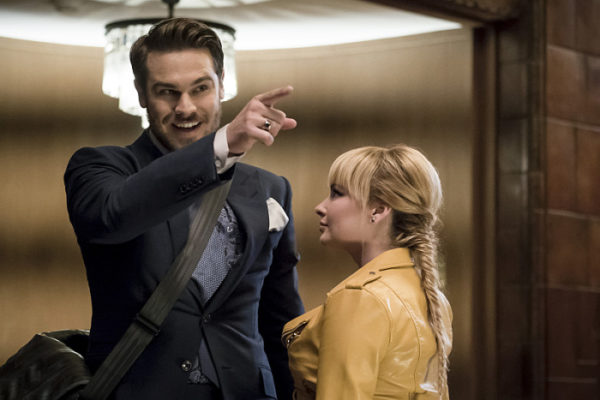 The team is trying to find Scudder after a police report about him attacking the demolitian crew.  Harry nicknames him Mirror Master, before Cisco can! They look into his only known associate, Rosalind. Rosalind is also a metahuman who can induce crippling vertigo.  Cisco nicknames her Top.

Joe and Cecile talk to Rosalind about Scudder and his whereabouts.  As they are flirting with each other, Scudder shows up and breaks Rosalind out of jail.

Team Flash figures out that Mirror Master travels through mirrors via wormholes. Scudder explains to Rosalind that he was stuck in the mirror. She tells him that he was gone for three years.  They both have abilities now.  They decide with their abilities that can take over the city. 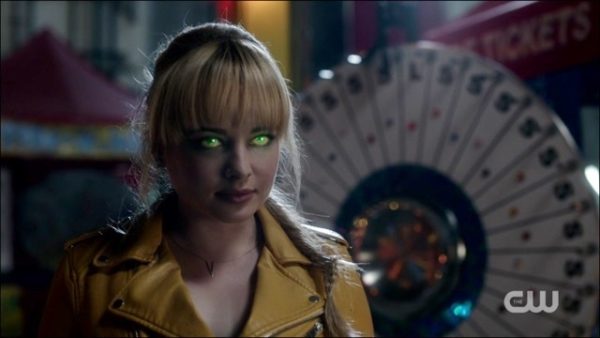 The two of them start robbing banks. Flash and Jesse team up to stop them.  Jesse encounters Top and almost falls to her death.  Flash saves Jesse, but is thrown into his reflection by Mirror Master.

The team has to figure out how to get Barry out of the reflective wormhole that Mirror Master put him in.  Cisco and Harry think that reducing the temperature on the mirror will break up the molecules enough for Barry to break through.

Jesse feels guilty for letting Top get the best of her and causing Barry to be trapped in the mirror.  Wally consoles her and kisses her…making her feel better. (Awwww, cute!) 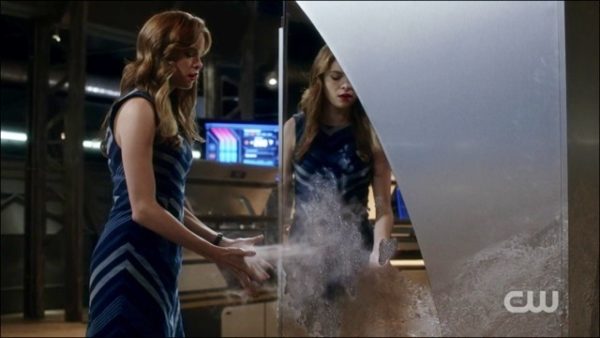 While they work on a gadget to create the cold, Barry figures out a way to stop the Mirror Master.  When they finally start to freeze the mirror, the metahuman alert goes off and everyone leaves Barry…except Caitlyn.  Caitlyn uses her secret freezing powers to freeze the mirror and Barry breaks through just in time to go after the Mirror Master and Top after their next bank robbery.

The Flash trick Mirror Master into thinking that Snart has returned for them.  Flash traps him in a circle of mirrors creating a reflective loop that Mirror Master cannot escape.  Meanwhile it’s round 2 for Jesse vs Top. This time Jesse uses her speed to knock out Top.

Mirror Master and Top go to jail.  Cecile asks Joe out to dinner.  He declines, mainly because he’s uncomfortable. 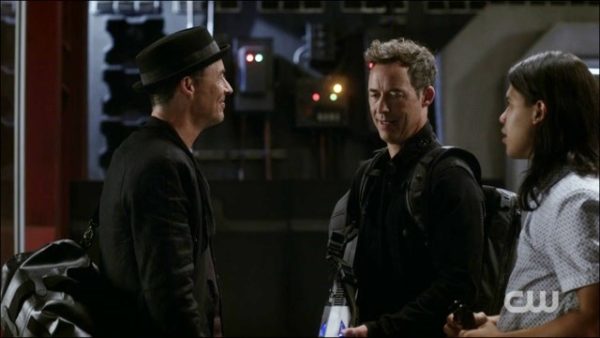 Cisco and Caitlin settle on Harrison Wells, a.k.a. H. R. from Earth 19…he’s just a goofier version of Harrison Wells from Earth 2. They reassure Harry that no one can replace him.  Harry tells Cisco that their decelerator didn’t work. Something or someone else released Barry. 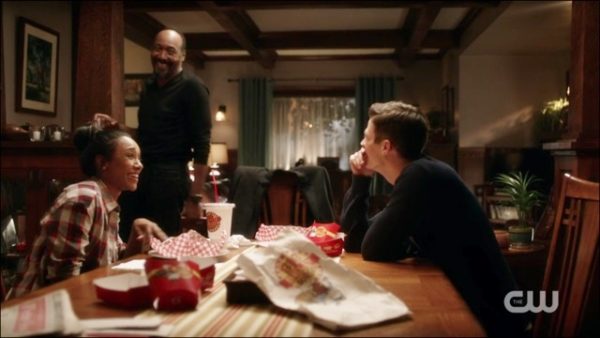 After everything settles down, Barry goes home to let Joe and Iris know that its time to get his own place.  Iris and Joe agree

Elsewhere,  Caitlyn gets home and showers.  She freezes her water and it doesn’t bother her at all.  When she gets out, her lips are blue and some of her hair is white. 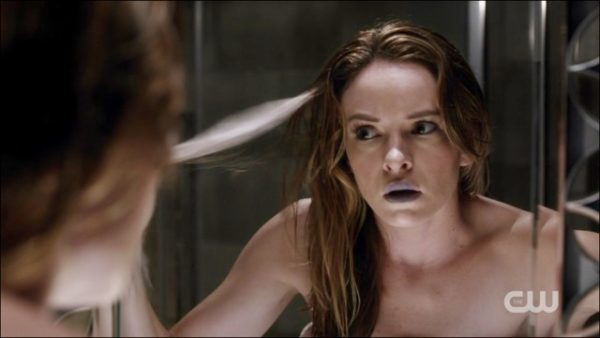 OK…I like this show because they do use science to explain how these superpowers are legit.  Sometimes that science can get really confusing though.

Other than that, the story is moving well, we know Jesse has a handle on her powers, Barry and Iris are moving long well in their relationship, Cisco is returning to the loveable nerd we know best, and there may be a love interest for Joe.  So what about Caitlin, Wally and the new Harrison Wells?

It’s so weird that they are getting another version of Harrison Wells, but just how many can they create?  I love Wells.  I wish they would stick with one because now this one…HR…has to connect with the group and find where he fits…it’s like getting a new puppy every season.

Caitlin won’t be able to hide her abilities for long.  And we know that everyone will accept her as she is, so what’s the problem? Hmmmmmmm…

How awesome was it to see Wentworth Miller as Leonard Snart!?!?!?  I miss that guy!

Poor Wally.  He finds where he belongs…with Jesse and they can’t be together. Well they can, but they don’t because he’s from Earth 1, she’s from Earth 2…it’s all just time and space. No big deal, right?  Is he ever going to get powers?  Will Alchemy approach Wally soon?