The Flash enters the Speed Force to save Wally. He is forced to face the consequences of his actions.  Jesse Quick makes a rogue move against Savitar. 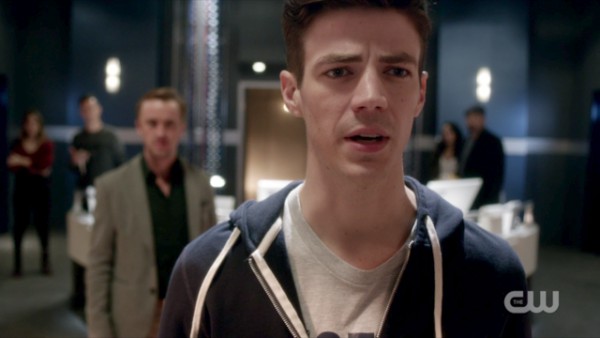 Kid Flash (Keiynan Lonsdale) was pulled into the Speed Force last week. He replaced Savitar in his speed force prison. Barry, The Flash (Grant Gustin) feels responsible for Wally’s imprisonment.  He tells the Cisco to get the breach room ready. He’s going back into the speed force to save Wally.

Joe (Jesse L. Martin)  is a little worried about Barry’s decision. HR (Tom Cavanagh) gives Cisco (Carlos Valdes) the idea to make an “inter-dimensional tether” to anchor Barry to their universe so he won’t get lost in the speed force.   Julian (Tom Felton)  offers to create a “biological component” to monitor Barry’s vitals.  Caitlin (Danielle Panabaker) says if his vitals fluctuate, they can pull him out if they need to.

Jesse (Violett Beane) offers to go with Barry.   Barry tells her to stay in the real world to keep everyone there safe.  Jesse reluctantly agrees.

Barry asks to talk to Iris. Barry promises to find Wally.  Iris just says OK.  Iris hasn’t spoken to Barry much lately.  He asks if he lost her.  Iris just walks away. 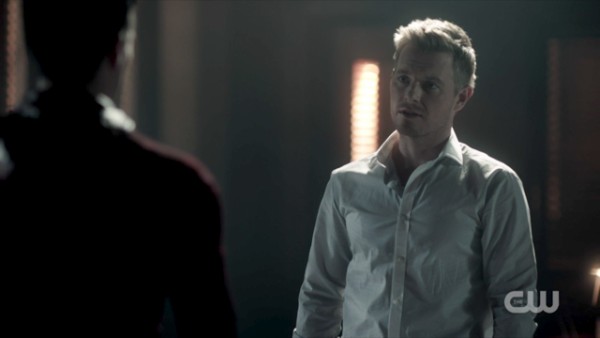 With help from Cisco  , Barry vibes into the Speed Force.  He is immediately thrown into a dark version of Central City.  The first person he meets is Eddie Thawne (Rick Cosnett), Iris’ deceased fiancee.  This isn’t really Eddie. This is the Speed Force disguised as Eddie.  Eddie asks Barry why he’s there. He says to save Wally.  Eddie says Wally is in the prison that Future Barry created.  The Speed Force is not going to accommodate Barry this time.  He lied to them about being okay with his mother’s death and created Flashpoint. Barry has to face the consequences of his choices.  The Speed Force won’t let Barry make any choices like that again.  Barry pleads with Eddie saying that Wally is just a kid.  Eddie says he’s a Flash. Wally made a choice and now he has to live with it.

At STAR Labs, Jesse asks Cisco to try and locate Savitar with the talon from Barry’s shoulder.  He asks Jesse what she’s going to do if they find Savitar. She says she will go after him.  Cisco tells her she can’t.  Jesse says they don’t know if Barry will return with Wally. They have to find Savitar and send him back to where he came from. Cisco says she’s staying put and HR is eavesdropping on their conversation.

Joe and Iris are staring at the future headline about The Flash’s disappearance.  The byline used to belong to Iris, but Flashpoint changed that.  Iris wonders if she made a mistake by breaking the engagement.  Joe tells her to look into her heart and she will find the answer.

Speed Force Eddie reminds Barry that Iris was once Eddie’s fiancee.  That all changed when Eddie sacrificed himself to save the world.  Eddie asks if Wally is the only reason that Barry is there. Barry says yes. The Speed Force says okay and Eddie points him to the elevators. The Speed Force sends a time wraith after Barry.  Barry barely escapes the time wraith and ends up in STAR Labs. 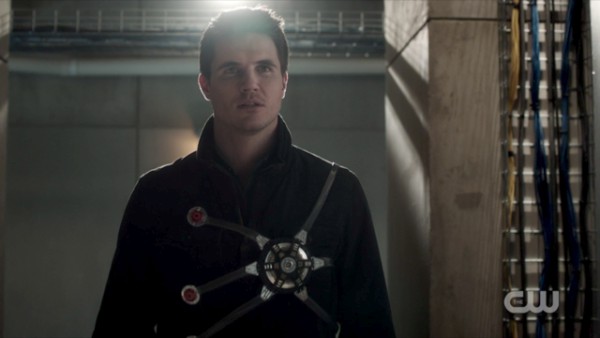 Barry hears a baby crying and sees Caitlin singing to a baby girl.  This time he is encountered by the speed force in the image of Ronnie Raymond (Robbie Amnell), Caitlin’s deceased husband.  Like Eddie, Ronnie also sacrificed himself to save the world.

Julian Cisco and Caitlin examine Savitar’s talon.  There is a flowing energy going through it, as if the talon is still connected to the armor.   Jesse suggests that it’s trying to reconnect with the body armor.  Cisco says the talon could lead them to Savitar. Jesse is eager to find him, but the rest of the team stop her.  Julian says a lone speedster is no match for Savitar. Caitlin assures her that they are going to find Savitar.  Jesse asks when.  HR says when the Real Flash gets back, making Jesse very upset.

HR runs after Jesse.  She tells HR to leave her alone. He tells her that in her quest for revenge she may be the one to get hurt.  She tells him on her Earth, she is the real Flash and has fought monsters before.  HR asks if any of those monsters were like Savitar. He starts to say something about her father and she stops him. She says her father would do anything to stop Savitar and that’s what she’s going to do. HR laughs at how similar she is to Harry.  She tells HR to stop trying to be her father.

Barry feels bad because Caitlin and Ronnie should have had a good life.  Barry knows what the Speed Force is showing him all the people who made sacrifices for the greater good.  Ronnie says they all made sacrifices for Barry.  Wally made a sacrifice for Barry when he went after Savitar.  Barry says Wally doesn’t belong in the Speed Force.  Barry admits that he is there to replace Wally. Ronnie says he can’t replace Wally and should leave while he still can.  Barry refuses.  He says he won’t leave until Wally is free.  Black Flash jumps out and attacks Barry.  Barry gets pinned down by Black Flash.

The team is alerted to Barry distress.

Barry realizes that he shouldn’t have given Wally the responsibility of saving Iris. Ronnie says the only way to free Wally is to free himself.   Barry has to disconnect the tether that Cisco made to stop Black Flash.  He destroys the link and Team Flash freaks out. 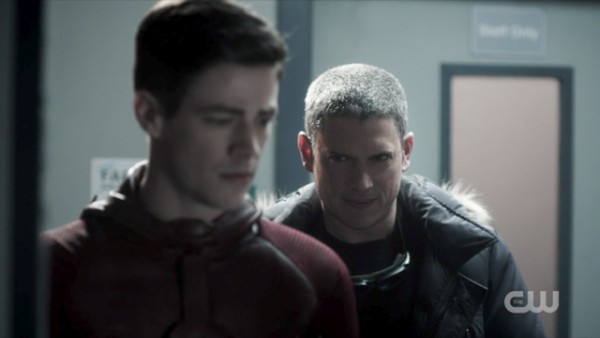 Barry wakes up in the hospital and finally finds Wally.  He is stopped by a cold blast from Speed Force Leonard Snart (Wentworth Miller).  Snart explains to Barry that Wally is caught in an endless temporal loop.  He’s reliving his mother’s death, over and over.  Barry says Wally doesn’t belong there. Barry is there to take his place because Wally is the only one who can stop Savitar and save Iris.  Snart tells him to change his future if he doens’t like it.  Barry says he can’t. Snart says that Barry keeps telling them one thing and doing another.

He tells Barry that he inspired Leonard Snart to be better, sacrifice himself for others, and to be a hero just like Barry.  He asks Barry if he wants to give up being a hero.  Barry says he’s done fighting.  Snart starts shooting at Barry with the cold gun. Earth 3 Flash, Jay Garrick (John Wesley Shipp) shows up to help Barry. 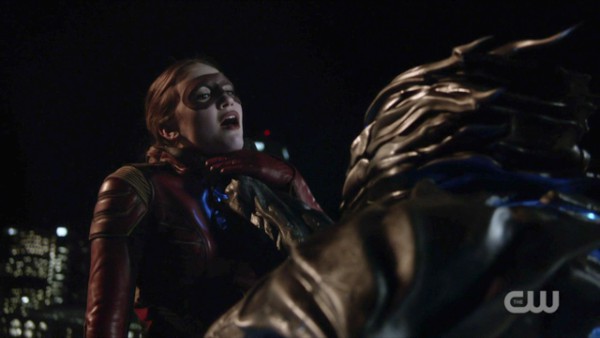 HR  tries to stop Jesse from taking the talon to find Savitar. She knocks him out and goes anyway.  Jesse lets the talon go and follows it to find Savitar. When it stops, Savitar appears saying he knew Jesse would come for him.  She tells him that she’s not afraid of him, and he says she should be.  HR is able to connect with Jesse to help her when Savitar tries to pull the talon away from her.  HR tells her to find his vulnerability and stab him with the talon. Savitar grabs her and tells her that he has plans for her.  She stabs him in the shoulder with the talon and he runs away.

Jay is really in the Speed Force.  Cisco contacted him and told him what was happening. Snart is still trying to stop them from saving Wally.  Snart tries his best to stop Barry and Jay. Barry gets into the room anyway.  He snaps Wally out of the loop and tells him they are going home. 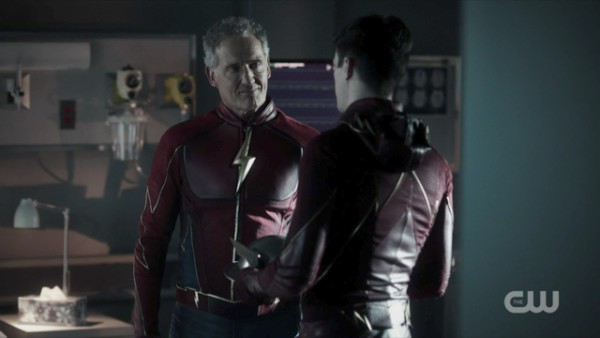 They start to walk out of the door and Jay stays behind.  Jay says a speedster has to take Wally’s place.  He tells Barry that he needs to put an end to it all and stop Savitar. Barry asks how. Jay says to be the Flash  Jay hands over his helmet. Cisco is able to track Barry through the helmet. Barry says he will give it back to Jay when they get him out of there…another person to sacrifice themselves for Barry.

Barry and Wally make it back to the real world. Wally is pretty shook up by the experience. Caitlin takes Wally for a check up.  Iris is happy to see Barry after thinking she had lost him.

Jesse tells Wally that she is leaving for Earth 3.  Since Jay is in the Speed Force, Earth 3 needs a speedster to protect it.  Also, Savitar told Jesse that he had plans for her.  That scared her.  Wally tells Jesse that he loves her.  She loves him too!  Jesse says “see you later” to Team Flash and thanks HR for being a friend.

HR tells the team about Jesse’s discovery about Savitar.  He can feel pain.  Under the armor, he’s just a man. 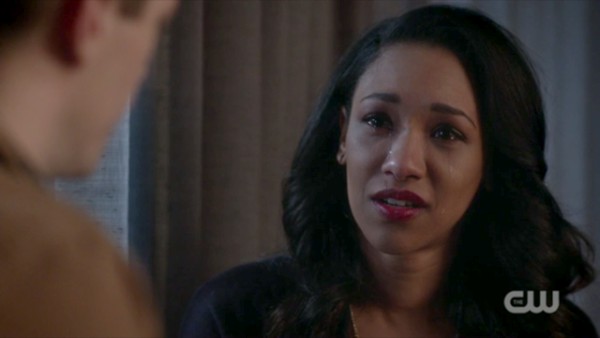 Barry and Iris sit and talk about the state of their relationship. Barry says that he cannot let her die.  He has been consumed with saving her. Iris gets it, but it made her question if he proposed for the right reasons.  She says she had time to think.  She doesn’t doubt the reasons he wants to marry her.  Iris wants to be his wife. Barry says he loves her but he proposed because he thought it would save her.  He was wrong.  He has to save her in the future by embracing the future.  Barry says it would be best if they took a break.

Well, next week should be more exciting. Check out the preview for the next episode of the CW’s The Flash.