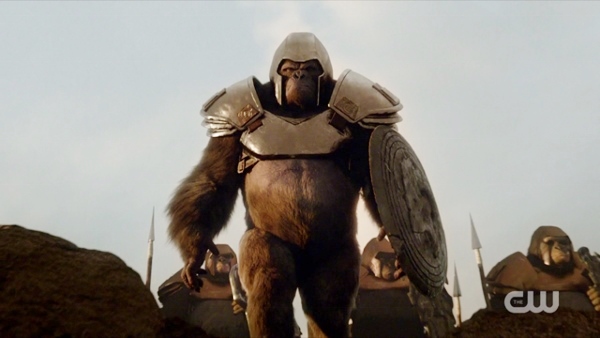 Team Flash attempts to stop an attack by Grodd on Central City.  Jesse and Wally take a big step in their relationship.

Last week, Team Flash traveled to Gorilla City on Earth 2 to rescue Harry Wells.  It was all a set up to use the Flash to defeat King Solivar and use Cisco to transport a gorilla army to Central City. Grodd was very upset that he was sent to Earth 2 and wanted to get revenge on The Flash by destroying Central City.  The Flash thought he prevented that from happening when he faked his death and then helped everyone escape Earth 2.  Think again Flash…

It’s Valentines Day at STAR Labs…or as HR (Tom Cavanagh)  calls it on Earth 19, Friends’s Day!  (I think I like that better!) HR even goes as far as to decorate STAR Labs with lots of reds, pinks, hearts, and lanterns.  Barry (Grant Gustin) showers Iris (Candice Patton) with love. Wally (Keiynan Lonsdale) and Jesse (Violett Beane) tell Harry (Tom Cavanagh) that she is moving to Earth 1…and he took it very well.  Cisco (Carlos Valdes) is a little down and wishes he had a valentine.  Caitlin (Danielle Panabaker) promises that his Miss Right will pop up at any time. BOOM! Enter Gypsy (Jessica Camacho)! 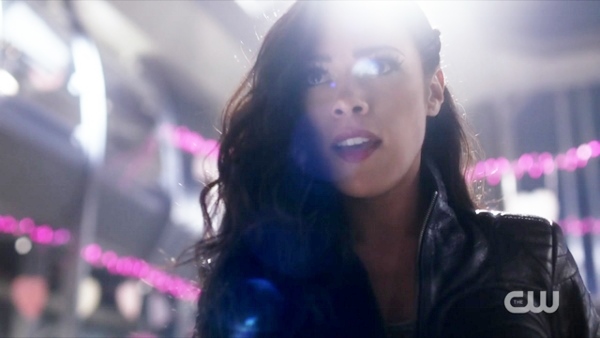 Gypsy’s visit is anything but friendly. She attacks Barry until Harry shoots her with a fancy taser like gun. Gypsy wakes up in the pipeline and the team has lots of questions for her.  She says she doesn’t remember attacking Barry or even how she got to Earth 1.  The last thing she remembers is tracking a breacher to Earth 2’s Africa.

The team put two and two together to determine that Grodd captured Gypsy and was controlling her when she attacked Barry.  This means that Grodd is on Earth 1.  And so is his gorilla army.  Grodd and his army are currently overlooking Central City.  He knows that Team Flash is aware that he’s there.

The team is a little thrown off, but are quickly working to find a way to stop Grodd before he attacks Central City.  Cisco asks Gypsy to help them. She says it’s not her fight.  Gypsy asks Cisco to let her go so she can go home.  Cisco reluctantly releases her.

Harry comes up with the idea to vibe Cisco to the near future to see what Grodd does.  Harry modifies Cisco’s vibe gear to make that happen.  He asks Wally to help him.

Wally is happy that Harry took Jesse’s news well. Harry says that Jesse’s happiness is all that matters.  He also says that he doesn’t know how much time he has left. Wally takes this to mean that Harry is dying. Harry makes Wally promise not to tell Jesse. He doesn’t want to do anything that would affect her happiness. 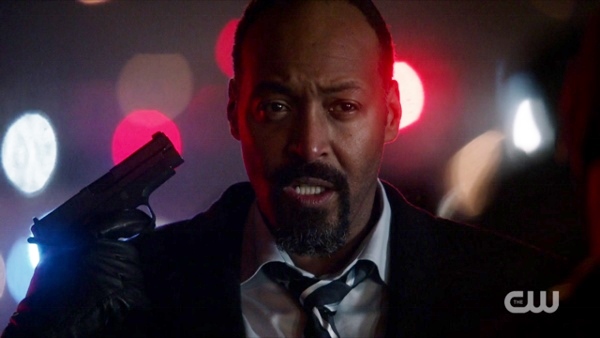 Cisco vibes into the near future and sees a street.  Joe (Jesse L. Martin) assembles the CCPD and meets Flash, Kid Flash, and Jesse Quick at that street.  Everyone waits there for Grodd to show up until Barry figures out it’s a diversion.  Grodd takes over Joe’s mind and tells Barry that he’s going to hit him where it really hurts.  Grodd makes Joe put his gun to his head and pulls the trigger. Barry is fast enough to push Joe backward. The bullet grazes him, but Joe is alive.

Meanwhile, a high official in the military is leaving in a car. The car is attacked by Grodd.

Back at STAR Labs, Harry comes up with another way to get one step ahead of Grodd.  Gypsy mentioned that when she was under Grodd’s control, she could see what Grodd sees.  Using this information Harry devises a helmet that would help Joe tap into what Grodd showed him. 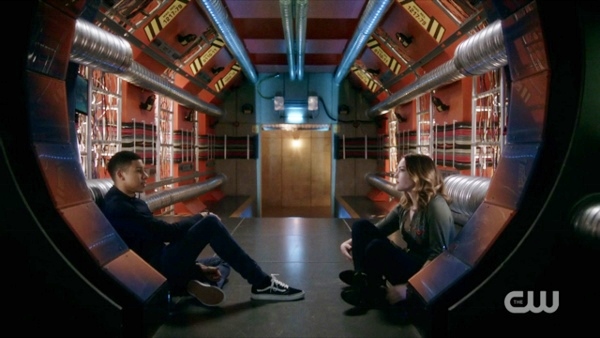 Meanwhile, Wally is sad about Harry and is hiding in the pipeline to avoid telling Jesse anything. She eventually finds him and asks what’s wrong. He tells her that it’s not a good idea for her to move right now. Wally says she needs to spend as much time with her dad as possible because he’s dying. Jesse knows exactly what Harry is up to and confronts him.  She is angry at him for lying to Wally to stop her from moving.  She says she’s moving whether he likes it or not.

Everyone quickly goes back to work on Joe’s memory.  Harry’s device works. Joe draws a picture of a man in a military uniform. The team quickly works to find out who this man is and why Grodd took him.

Meanwhile, Barry is getting nervous. He is so desperate to stop Grodd. One of the headlines from the future was that Central City was still recovering from an attack by gorillas.  If Barry can stop Grodd, he can change the future and save Iris. Barry decides the only way to stop Grodd is to kill him.

Iris tells Barry that her life isn’t worth any solution that requires Barry to compromise his values. 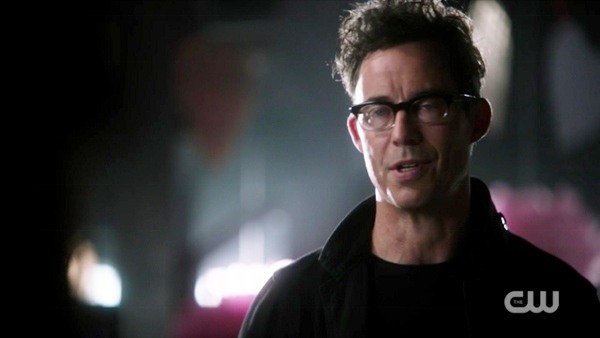 Harry tells Barry that killing Grodd is stupid. A true hero always finds another way to win.  Barry is a true hero. Harry knows he will do the right thing and find another way to defeat Grodd.

Team Flash identify the man in Joe’s drawing. He is a high ranking general with access to nuclear weapons. Grodd has already taken over his mind and has activated those nuclear weapons. The Flash races to stop the missiles.

The only way to stop the launch is a to input a five digit code. The combinations are endless.  Barry punches in the correct code with literally 2 seconds before launch.  Central City is safe and Grodd is not happy.  Grodd and his army head for Central City.

Barry sends Cisco on a special mission to help stop Grodd. Cisco searches for Gypsy on Earth 19.  He asks for her help one more time.  He tells her that she wants to be a hero.  This is her chance to help save Central City. 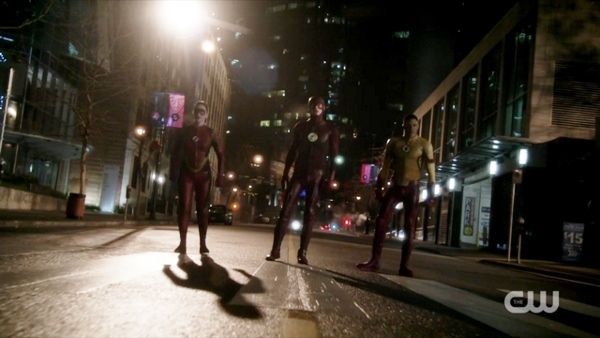 The Flash, Kid Flash, and Jesse Quick go to meet the army. They detain the army, but Grodd gets the best of Flash. Just when it looks like Grodd will defeat Team Flash, Cisco and Gypsy appear…with Solivar.  Solivar challenges Grodd for control of the gorilla army.  The fight is contained to a small area in Central City, with little destruction, and Solivar is the victor.  He goes to kill Grodd, but Barry stops him.  Barry tells him that they will put Grodd away on Earth 1.  Solivar agrees and leaves with his army back to Earth 2.

Team Flash wins again, with a little help from Harry and Gypsy.  Gypsy is returning home. Cisco turns up the charm, insisting that she is so into him. Cisco is smooth, but Gypsy is smoother.  While telling Cisco that even if she is into him, Gypsy passionately kisses Cisco, then tells him that He can’t handle Her.  (Nice!)  Cisco is left mumbling something about marrying that woman.  It’s time for Harry to go home too. He says his goodbyes to everyone.  He accepts that Jesse is staying and makes Wally promise to keep her safe. 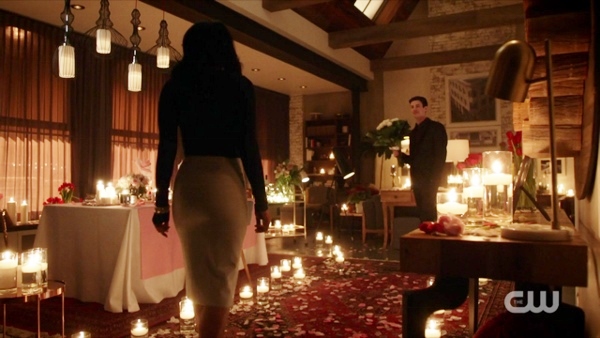 Later Iris returns home to find Barry with roses, candles lit and dinner on the table. He tells her that he was so worried about preventing the future that he forgot about making a future.  He pulls out a ring that has an amazing story.

Barry’s great grandfather bought the ring in Europe while fighting in the war. When he returned home, his great grandmother was waiting on the pier for him and he immediately proposed to her. The ring belonged to his mother and now he’s giving it to Iris.

Barry gets down on one knee and asks Iris to marry him.

Wally is sent on a food run when he runs into Savitar! 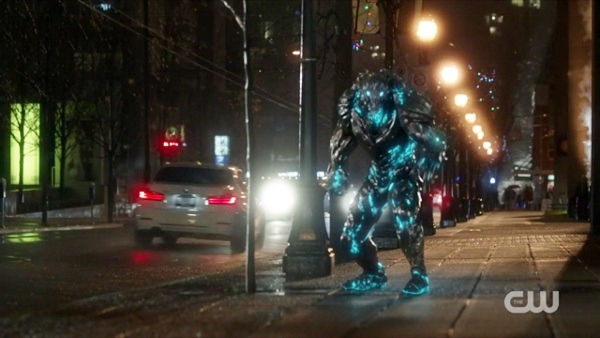 The romantic part of me says yes, she will. They really don’t know if changing any of the future will save Iris.  So they have to make the best of the time that they know they have.

BUT…on the other hand, I hope she says no. Iris needs to be able to find out who she is without the super hero family.  I feel like Iris has lost her independence with Barry being the Flash, Wally being Kid Flash and Joe being a cop.  They all have a role to play in saving her, but what about Iris saving herself.  Barry and Iris are my faves, but…what would life be like for Iris West if there was no Barry Allen?

I was beginning to wonder if Wally still had some kind of connection to Savitar.  It was Savitar who gave Wally his powers.  I knew there had to be some kind of relationship there that was cut off when Savitar was defeated the first time. Plus, how was Savitar going to make his way back? It had to be through Wally.  Wally is a speedster…he has a connection to the speed force…Savitar has a connection to Wally…it was just a matter of time before Savitar found a way to use Wally to his advantage.

But such bad timing. Wally is the city’s hero! Everyone loves Kid Flash. If Savitar throws off Wally’s game, then how will that affect Kid Flash and his popularity?

Check the preview for the next episode of CW’s The Flash!