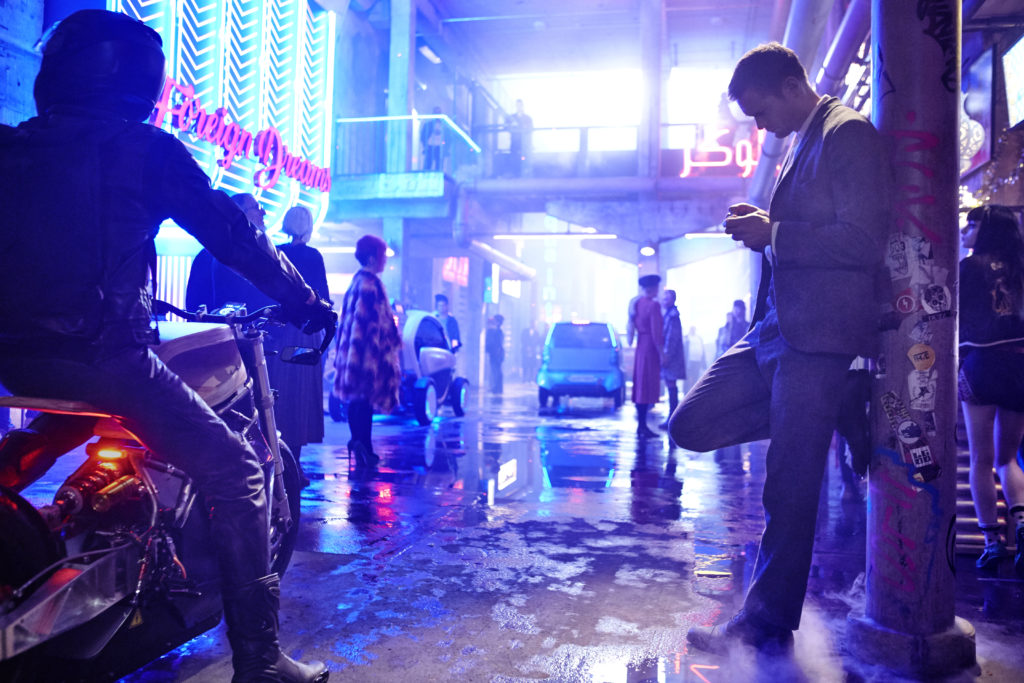 Duncan Jones made his directorial debut with Moon, a critically acclaimed science fiction story starring Sam Rockwell.  His next stint as director came with the Jake Gyllenhal vehicle, Source Code.  His next and most recent follow up some will remember more fondly than others, last year’s Warcraft movie.  In 2017 the spiritual sequel to Moon, Mute, will debut on Netflix.  We now have our first look at the upcoming movie, and while no release date has been set, we can go ahead and pour over the three photos released.

Set in the near-future, Leo (Alexander Skarsgård) is a bartender living in the pulsing city of Berlin. Because of a childhood accident, Leo lost the ability to speak and the only good thing in his life is his beautiful girlfriend Naadirah (Seyneb Saleh). When she vanishes without a trace, Leo’s search for her takes him deep into the city’s seedy underbelly. A pair of wise-cracking American surgeons (Paul Rudd and Justin Theroux) are the only recurring clue and Leo is forced to take on this teeming underworld in order to find his love.

All the photos are channeling a decidedly Blade Runner vibe.  That’s not a bad thing, in fact, it just gets me more excited for the movie.  Blade Runner is a classic for a reason and, I’m not saying copy it, but anything that breaks out of the everyday mold is good.   The above photo not only gives us the first real idea of the art direction, but we get our first look at Alexander Skarsgård as the main character, Leo.

The next two feature Paul Rudd and Justin Theroux as the American doctors.  Part of me firmly believes the hair on those two will become sentient and independent at any moment.

Mute takes place in the same world as his first movie, Moon but further in the future from now.  Moon took place roughly 26 years from the now of 2009, Mute takes place roughly 40 years from the now of 2017.  There have been rumors that Sam Rockwell‘s character, Sam Bell, will make a brief appearance.  This could come in the form of a advertisement, news story, or even a brief cameo.   Avoiding any spoilers for people that have yet to see Moon, that’s as much as I’ll speculate.

Jones’ has confirmed this is the second movie in a planned trilogy.  Moon being the first and the final movie as yet unnamed.

@ColliderNews *cough* love you guys, but Source Code not part of any trilogy! Trilogy is Moon, Mute and a third film after that.