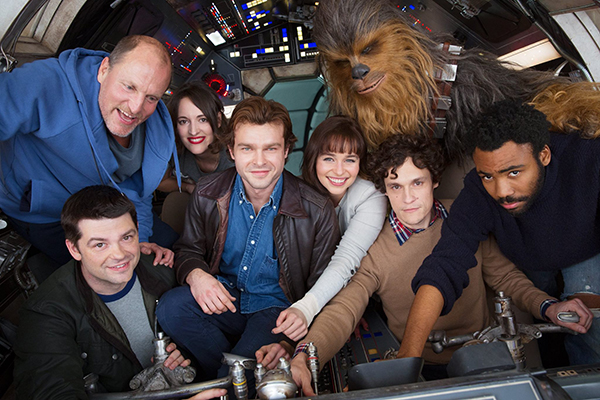 Team Han Solo is ready for action! Star Wars released the first image of the cast of the spinoff film and it doesn’t disappoint. The picture may be a little corny, but excitement is definitely high as they began principal photography yesterday, February 20th!

Stars Alden Enrenreich, Donald Glover, Emilia Clarke, Woody Harrelson and now confirmed Phoebe Waller-Bridge all squeeze in with Joonas Suotamo returning as Chewbacca and directors Phil Lord and Christopher Miller. And where are they squeezed you ask? Why in the cockpit of the Millennium Falcon! You gotta make sure the picture is legit with that set piece. There’s one person missing from the photo, however. The announcement on StarWars.com also confirmed that Thandie Newton has joined the cast as well! Released with the photo was a statement from the directors.

Watching such inspired people from all over the world, with such unique voices, come together for the sole purpose of making art, is nothing short of miraculous. We can’t think of anything funny to say, because we just feel really moved, and really lucky.

The photo reminds me of The Force Awakens photo for Vanity Fair where Harrison Ford’s Han Solo joined Rey and Finn in the cockpit. But I digress. What do you think of the photo? Are you looking forward to the film? Let us know! Be sure to check out the Han Solo spinoff film slated for May 25th, 2018. Punch it, Chewie!