Firefly’s Ron Glass Has Died at 71 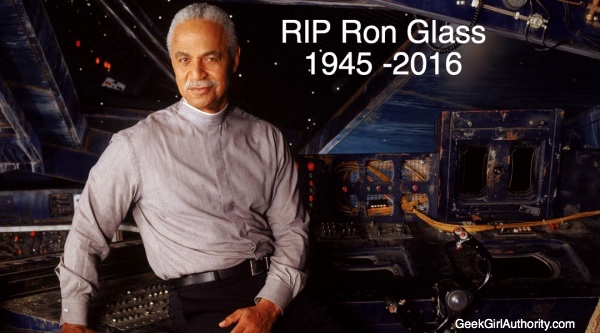 Ron Glass has died at 71 according to TMZ. Ron Glass became a household name as Detective Ron Harris on the hit sitcom Barney Miller which ran from 1975-1982. I spent many an evening watching Barney Miller with my dad. 2016 has painfully claimed two lives from that hit comedy, Abe Vigoda in January and now Ron Glass.

Glass had a healthy acting career following the end of Barney Miller’s run. His resume in nothing short of amazing. He won over the heart’s of geeks everywhere with his portrayal of Shepherd Book on Firefly and also the movie based on the series, Serenity. It’s in the film Serenity where he first hurt Browncoats’ (Firefly fans) hearts, now with his death, Browncoats’ hearts are broken.

Here are social media reactions from his Firefly family:

Ron Glass. What an honor it was to know you, to work beside you and to have called you my friend. You will be missed. I love you sir.

Ron Glass was one of the greatest actors to work with. His laugh was beyond infectious and his generosity was ever present. #ripronglass

Ron Glass was also a sassy smart ass and I prize that very much. A leaf on the wind. #ripronglass

He got there with grace, humor & enormous heart. He was, among so many other things, my Shepherd. Raise, appropriately, a glass. Rest, Ron. pic.twitter.com/yzPly7TmgE

This is me acting like an idiot just so I could hear Ron Glass laugh. He was the kind of person that remembered the details, that asked about your family’s well-being. He hugged hard and often. He would laugh till he cried at a sick joke and top it with a worse one. He loved a Grey Goose crantini and spilled one on my white jeans in the heat of telling a story, and then just said, “Girl, those were ugly pants anyway.” I adored him. Everybody did. I love you, Ron. Can’t wait to see you again. “I don’t care what you believe. Just believe it.”

Among the kindest and gentlest souls to have walked this earth with us.https://t.co/rF1bDPxeRa

Every time I talked to Ron Glass, he’d make me smile and feel his zen. I cracked him up once and it made my year. Enjoy Nirvana, Ron!

Interesting note for theatre nerds like me: Glass was a member of the theatre fraternity, Alpha Psi Omega!