Home » Movies » All the Rest » Kong Is King in the Final KONG: SKULL ISLAND Trailer

Kong Is King in the Final KONG: SKULL ISLAND Trailer 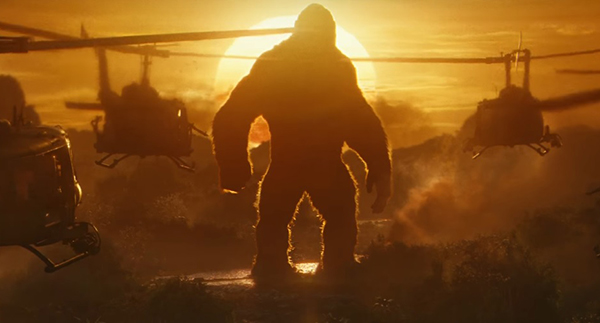 Are you pumped to see Kong: Skull Island? Well if not, this is the final trailer to get you excited about the film. The trailer rehashes footage we’ve already seen intertwined with new footage. This is all set to a song choice which I find to be rather clever. Make no mistake, Kong is King.

The trailer is formatted the same as the others. Before the island, arriving at the island, and surviving the island. The difference with this trailer is that they must’ve seen the popular Suicide Squad trailer. The images and sound effects are lined up to accompany the song played throughout most of the trailer. And that song is “We Gotta Get Out Of This Place” by The Animals. The theme of the film has been that the humans need to leave the island. The song sets up doomed mood as we watch utter destruction unfold between beasts and humans. So what better song choice, I mean really.

The film is filled with many stars including Samuel L Jackson, John Goodman, Tom Hiddleston, Brie Larson and John C Reilly. It’s the second in the monster movie franchise planned by Warner Bros, the first being Godzilla. And who doesn’t want to see big monsters fighting each other on the big screen? Hell, King Kong is using a tree to smack some monsters around!

What do you think of the final trailer below? Let us know and be sure to see Kong: Skull Island in theaters March 10th.