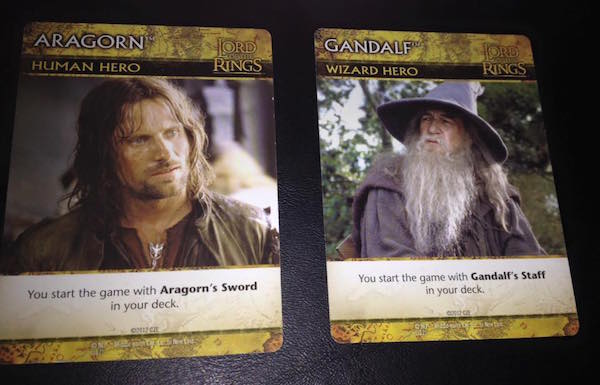 My childhood love for table top gaming was rekindled about 5 years ago. At that moment, a whole new universe of games was opened up to me. I have been playing non-stop since then. If you have been involved in the board gaming hobby at all, you have probably noticed that the sheer amount of volume out there has you striving to play as many different games as possible. Maybe then, like me, you don’t return enough to the games you may have really liked as often as you should. Well, recently I got to see the Lord Of The Rings movies again, and that got me reminiscing about one of the games that sparked my gaming renaissance, The Fellowship of The Ring Deckbuilding Game, by Cryptozoic. So last night, we dusted it off and revisited our old friend, and it was as fun as I remembered. After sharing it on social media, the reaction seemed to indicate that there may be a significant group of people who missed this one the first time around. Hence, this review.

FOTR combines several of the mechanics of a standard deck-builder with the well loved setting of Tolkien’s universe. It is for 2-5 players, ages 15 and up. Each player draws 5 cards for their hand each turn and must use all of them or else discard them at the end of their turn. Each of these cards can have some or all of the following: a victory point amount, power, attack/defense abilities, and draw/discard/destroy mechanics. During their turns the players may acquire cards from “The Path” (five cards that are available like Texas Hold ‘Em) and adding these to their decks. The idea is that you obtain more powerful cards that will recycle into your deck to be used as the game goes on. When you have no cards left to draw from in your personal deck, you shuffle your discard pile and start again. Rinse and repeat.

One of the neatest aspects of the game is the ambush/attack/defense mechanic. At the end of a player’s turn, the Path is replenished from the main deck, so there are always 5 cards in the Path at the beginning of the next player’s turn. If one of those cards is an enemy type (orc, ringwraith, etc.) it may have an ambush mechanic. This will affect only the player who is about to take a turn. The ambush effect may cause the player to discard one or more cards or acquire a “Corruption” card (-1 victory point) which are bad things. You’ll get very upset when you start your turn with only 3 cards instead of a full hand.

The goal of the game is to have the most victory points at the end. The game ends when all of the archenemies are defeated or the main deck runs out of cards (which has never happened in our games). The archenemies are cards, like Saruman, Lurtz, and the Balrog, that are very powerful and wreak havoc on all players with their attack powers once they surface, and only on your opponents if you are fortunate enough to acquire one for your deck and use it going forward. Their victory point totals are the highest in the game, and they cost quite a bit of power points to acquire. Only one is available at a time and only some are used each game. These are randomly chosen at the beginning of the game and provide a bit of variety for future games. 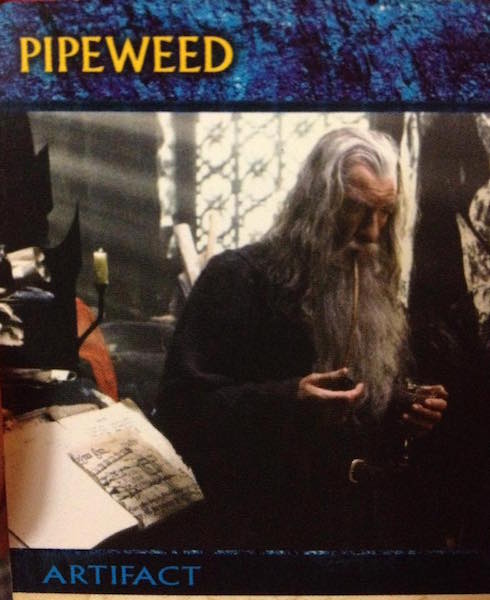 I have played this game several times over the years with family and friends, ages 13 to 60. Everyone enjoyed it and once they got the mechanics under their belt, the competition and use of strategy ramped up. There is an amount of luck involved, as you are drawing cards each turn, but the strategy is rich enough for a seasoned gamer to enjoy it in a social setting. This game may not be as hard core as other deck builders, but the marriage of mechanics and theme is done almost perfectly, in my opinion, and is worth the time to check it out, especially if you love Lord Of The Rings.

Thanks for reading and nerd on! To acquire this and other geeky games, check out www.dicedropgames.com