Facing Off: GAME OF THRONES (S07E04) The Spoils of War

My colleague, Kimberly Pierce, and I are alternating weeks recapping Game of Thrones this season. On our off weeks, though, we still have something to say. She did the recap this week, so I’m facing off with her (Get it? Like with FACE MAGIC.) by chiming in with my two cents here…

Let’s talk about Littlefinger (Aidan Gillen) and the dagger he gives Bran (Isaac Hempstead Wright). Game of Thrones has so much going on that it’s hard to remember everything that happened in the now-distant past, but this scene was one of the ones in “The Spoils of War” that inspired me to rewatch it immediately and then get Googling.

Had you also forgotten that after Bran was pushed from the tower of Winterfell because he saw Cersei (Lena Headey) and Jaime (Nikolaj Coster-Waldau) getting frisky, someone hired a catspaw assassin to come kill him with a dagger? The Game of Thrones Wikia recaps this event, in part, with this:

“The assassin carried an elaborate dagger, made of Valyrian steel and with a dragonbone hilt. Catelyn resolves to carry the blade to her husband in King’s Landing to investigate further. Petyr “Littlefinger” Baelish claims that the dagger belongs to Tyrion Lannister. This leads Catelyn to take Tyrion prisoner when she chances across him at the Inn at the Crossroads. Her actions spark a conflict between House Stark and House Lannister. Tyrion acquits himself of the crime via trial by combat at the Eyrie.“

There are theories about who hired the assassin, and a lot of people believe it to be either Jaime or Cersei, but my favorite is that it was Littlefinger himself. Who knows what his intentions in gifting the dagger to Bran now really are, but when Littlefinger comments on the chaos Bran has found on his return home, Bran responds,”Chaos is a ladder.” Littlefinger pulls back, visibly stunned at being quoted back to himself. To me, this suggests that the Three Eyed Raven knows exactly where the dagger came from and who hired the assassin– and that he’s looking right at him.

The other thing that had me Googling was newly returned Arya (Maisie Williams) acknowledging her hit list to Sansa (Sophie Turner) and Bran. When she tells Sansa about it during their first meeting in the family crypt, Sansa laughs and Arya joins in, apparently willing to play it off as a joke like she did with Ed Sheeran and his pals back in the woods. When the sisters join Bran under the weirwood, though, he gifts Arya with the dagger from Littlefinger after telling her that he saw her at The Crossroads and thought she’d been heading to King’s Landing. Sansa expresses disbelief that Arya would want to go back there, but Bran placidly explains that Cersei is there and that Cersei is on Arya’s list. Arya looks uncomfortable as Sansa registers that this means the list is real. Sansa asks who is on the list, and Arya says that most of the people on it are already dead.

In the crypt, Arya shared that Joffrey was on the list as both girls expressed dismay that they hadn’t gotten to kill him themselves. Bran has reminded us that Cersei’s on it. But it’s been so long since we saw Arya putting herself to sleep by reciting it that I couldn’t remember the rest. When Littlefinger watched Arya training with Brienne (Gwendoline Christie) in the courtyard, wearing the dagger at her waist, his calculating expression made me think he might be on it. Thanks to the internet, I now remember that he isn’t (yet), but in case you also need a refresher, HERE IT IS.

I don’t know about you, but I’d completely forgotten that Beric Dondarrion, Thoros of Myr and The Red Woman are on her list because of the highwaymen selling Gendry to Melisandre!

The continuing reunions in this season are SO GRATIFYING. If there isn’t room for it in the remaining three episodes, I’m crossing my fingers for an online extra of Sansa and Arya catching each other up on what’s happened since they last saw each other. In my mind, Sansa will fill Arya in on the horrors of her marriage to Ramsay Bolton, and Arya will righteously declare her regret at not being the one to kill him. To which Sansa will calmly reply: “I did. I fed him to his dogs.” Then she’ll grin at her sister like a cat and the two will fall on the floor rolling in laughter over the beauty of it. When they can catch their breath, Arya will tell the story of feeding Walder Frey his sons in a pie and they’ll lose it all over again. (I release my copyright on this idea to the creators of the show, if they want to use it…)

A reunion I didn’t even know I wanted until it happened was between Jon Snow (Kit Harington) and Theon Greyjoy (Alfie Allen). As Jon approaches Theon, emerging from the surf on Dragonstone with a dinghy and a bunch of Iron Islanders, he exudes the aura of a WOLF, and Theon exudes the aura of prey. I want to offer an ovation to everyone involved in that scene. It was one of two in this episode that brought Jon up to the level of the hype that surrounds him, IMO. (I’ll get to the other in a moment…)

Another reunion, of sorts, that I loved: Tyrion (Peter Dinklage) seeing Jaime on the battlefield. I agree with my colleague, Jenny Flack, that Jaime will survive his near-drowning after someone (Bronn (Jerome Flynn)? Dickon Tarly (Tom Hopper)?) pushed the armor-clad warrior out of the line of Drogon’s fire and into deeper-than-it-looked water. I’m holding out hope that the first thing Jaime sees when returning to consciousness will be Tyrion’s concerned face, and now knowing now that he didn’t kill Joffrey, they’ll reunite and become a team. (I know. It’s a long shot.) 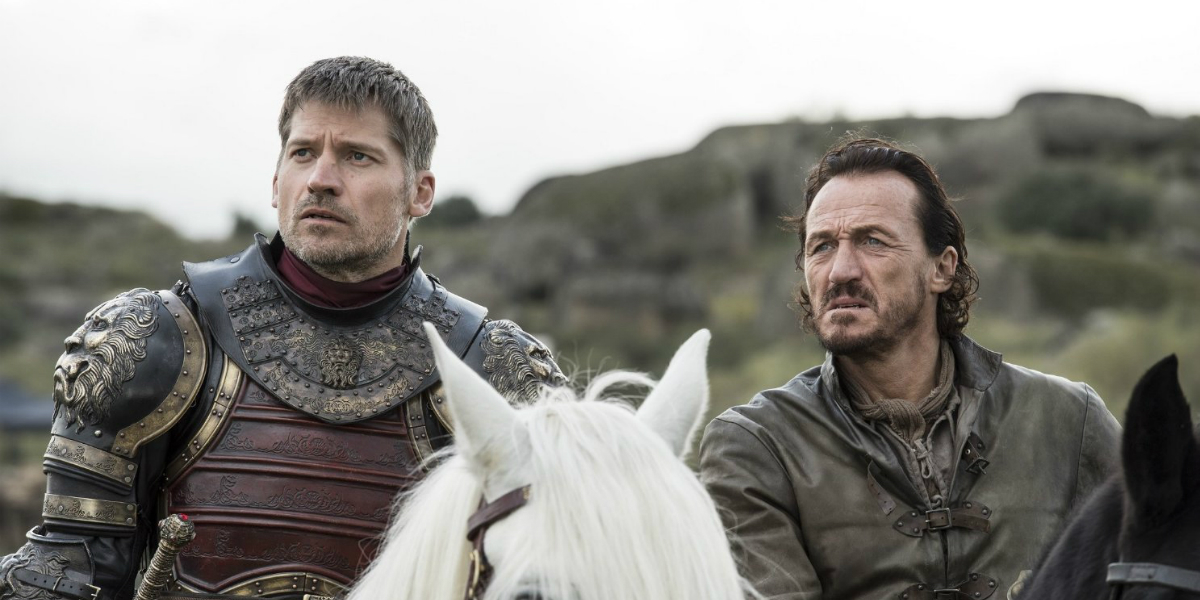 Back to that second time Jon lived up to the hype: during his trip into the dragon glass caves with Daenerys (Emilia Clarke), wherein he proved that the Night King and his army exist by showing her a drawing of them on the wall, there was serious chemistry! After all these years of buildup to the two of them sharing screen time (and maybe a family- past or future), it’s a relief to know that the energy around them is capable of crackling. I don’t think he feels his privilege as King in the North well enough to imagine making a proposal of marriage to her, so she’ll have to be the one to recommend that solution to their impasse about him bending the knee.

Last thoughts from me for this week: Podrick (Daniel Portman) would make a nice boyfriend for Arya if she wants one. He’s cool with being dominated by strong women, and those brothel ladies raved about his skillz. If they decide to throw some hetero romance her way, he has my vote. If they decided to toss out Tormienne and make it Briarya, though, I could get behind that, too. 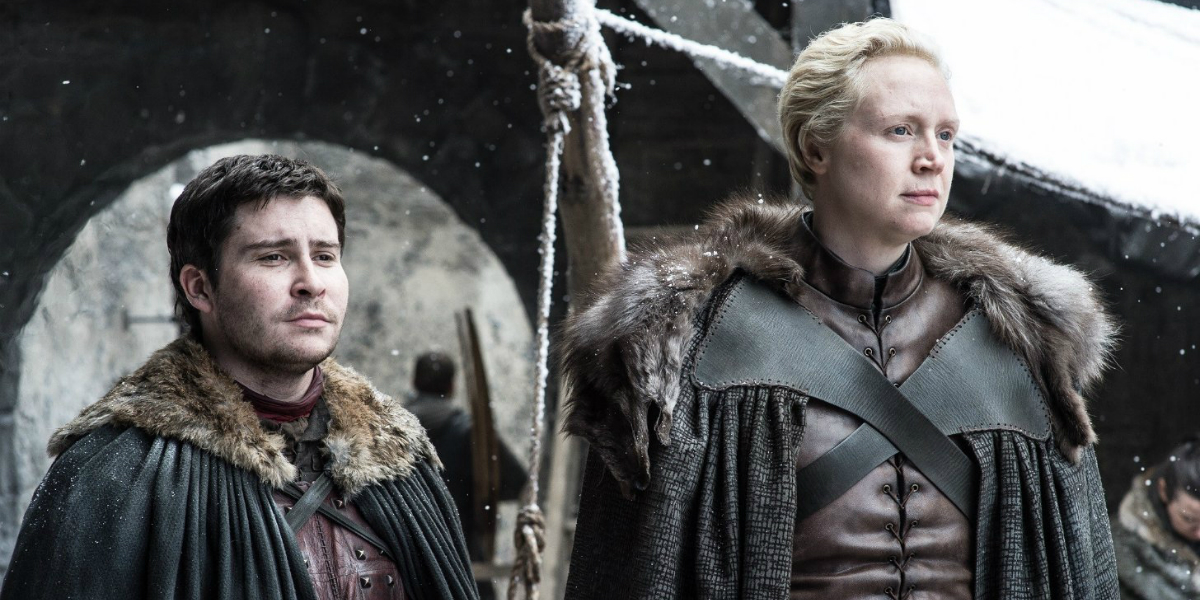