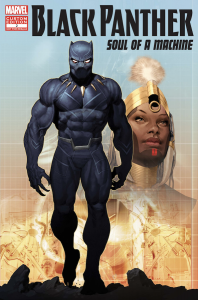 The fictional African country of Wakanda is one of, if not the most technologically advanced and richest countries on the planet. The country is home to a huge vibranium source, brilliant scientists and, of course, Black Panther himself, King T’Challa. With this history, it comes as no surprise that Marvel Custom Solutions and Lexus teamed up for the tremendously anticipated Black Panther film due out in February. If you go look at that amazing Black Panther trailer again (and you should), you’ll see a shiny Lexus. Yes, this is product placement, but if you think about it, the two really do go together.

The partnership has also created the graphic novel titled Black Panther: Soul of a Machine. Yep, Black Panther and his Lexus LC 500 are going up against Marvel villain Machinesmith in Wakanda. Four chapters of the novel have already been released and the next four will be out in December.

What’s really cool about this project is that it was helmed by Fabian Nicieza. Nicieza is the co-creator of the character Deadpool and also X-Force. He’s worked on many other titles including Thunderbolts, Gambit and Cable and Deadpool. Also writing for the project were Geoffrey Thorne and Chuck Brown. Recently, Geek Girl Authority caught up with Nicieza for a chat at the Lexus and Marvel Black Panther Press Event for a sneak peek at Black Panther Soul of a Machine. It was a very fun interview and of course, we had to drop some questions about Deadpool and X-Men! 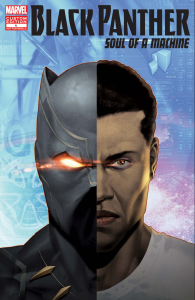 We asked Nicieza how he became involved in the project. He stated that he’s been engaged with Marvel Custom Solutions in a consistently familiar way for some time. He was told that the project was Black Panther and also, that Lexus cars would appear in the film. He was on board. He’s been a reader and a fan of Black Panther since he was seven years old when the hero first appeared as an Avenger. He then went on to reading the solo series in the seventies and kept up with the character ever since but never wrote for the character.

When talking of the product placement, Nicieza pointed out “Lexus’ brand pillars are so sympatico to Black Panther’s brand pillars. It is incredibly intelligent, gifted craftsmen, scientists and engineers trying to achieve technological perfection that enhances humanity. That’s Black Panther. That’s Lexus. There’s a natural fit where it’s no longer a ‘car commercial comic’, it’s a story that reflects the themes of both brands.”

For help formulating my questions for Fabian Nicieza, I had GGA’s Marvel expert Matt Key suggest some super fun and fan-worthy questions. But first, check out this souped up Black Panther inspired Lexus from the event! I mean, come on. It’s pretty cool. 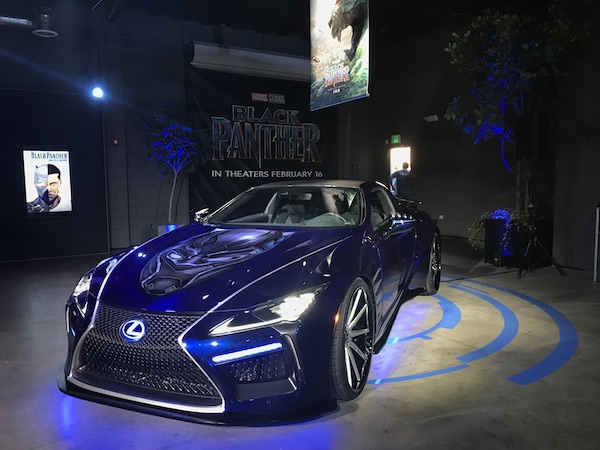 For reals — Is Deadpool an homage to Slade Wilson (Deathstroke) or a parody of him?

He is neither. How’s that for your answer? (chuckling) He was a synthesis of Spider-Man and Punisher by way of Rob’s (Liefeld) love of George Perez’ costume designs for Deathstroke and by the way of Taskmaster who George designed one year before he designed Deathstroke and guess what? Taskmaster has pouches and swords. If he was a parody of Deathstroke, he would have had a butler named Spearmint because Deathstroke has a butler named Wintergreen. And he would have had a son who would never shut up but couldn’t see smell or hear because Deathstroke has a son who can’t talk. In my limited experiment as a writer back then, that’s as far as I would have gotten with a parody,  He is not a parody, he never was a parody, he never will be a parody. He is his own character. Rob described him as Spider-Man meets Punisher and when I started scripting, my brain leaned toward the Spider-Man part of it. And I thought, simply, wouldn’t it be funny if Cable got annoyed while fighting this cold hard mercenary guy because the mercenary was a such pain in the ass. The whole first appearance of Deadpool is not about Deadpool, it’s about Cable. And showing that Cable has a sense of humor.

How much of the fourth wall breaking insanity of Deadpool was there from his inception? 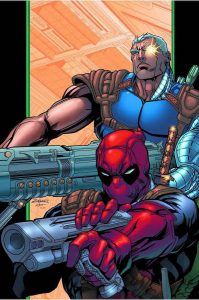 None at all. I never wrote Deadpool as a monthly comic book character until 2004. I’m sure at that some point I would have gotten there had I done that because I’m a huge fan of Bugs Bunny. And Bugs Bunny always broke the fourth wall, but I inherited some of the fourth wall breaking when I started writing Cable and Deadpool in 2004. And the combo of Marvel having a recap page on their first pages which was an institutional editorial policy and my hatred of that because it was opening up a comic book and finding a dry page of text which was everything a nine year old shouldn’t have wanted in a comic book. So I asked can I have a Deadpool head and he’ll just have word balloons and he’ll tell you what happened in the issue before and they said, yeah fine and then Patrick Zircher said I want to draw an entire page. So, Patrick would draw an entire page and Deadpool would do the recap page and the minute you do that you’re breaking the fourth wall because he’s talking about comics he appeared in.

But I was also answering the letters pages myself in the back of the book and that was Deadpool’s first person POV so your opening and ending each issue breaking the fourth wall. I think it got to be too much in Cable and Deadpool, quite frankly. It was too easy to do that but the recap page and the letters page was a consistent feature of the book that fans loved. It won a Wizard Award for Best Letters Page in a comic. So that’s when I did it the most. It wasn’t a part of the character’s inception because he was a mainstream Marvel universe bad guy, he was a mercenary with a big mouth.

Were you surprised that people loved the breaking of the fourth wall so much?

Breaking the fourth wall was just an evolution. You know when I knew that people liked Deadpool? Three days after the first issue came out on the direct market because I was in the offices and I would get the letters out of the mailroom before the editors would see them because I wanted to see what fans were saying…..I went and got all the New Mutants mail, New Mutants mail went from about six inches to two feet high. Seventy percent of those letters for New Mutants 98 said ‘we love what Rob is doing, the whole Cable thing, and that Domino character and that Deadpool guy was funny, bring him back’….. If he wasn’t popular from the very beginning, I say this all the time, why would we have made him one of five trading cards that got inserted in X-Force #1 when he wasn’t going to appear again until X-Force #2.

“X-Cutioner’s Song”, “Phalanx Covenant” and “Age of Apocalypse” — How much of that was coming from you and how much was editorial?

Technically, all of it was from editorial because our crossovers were planned in the publishing budget for the year, so we knew we had to do a crossover at a certain point. X-Cutioner’s Song was basically all me breaking down the whole story in a rush because all the image guys were leaving but hadn’t left yet and were waiting and dragging it out to the point where we were getting closer and closer to the crossover. I did that whole breakdown myself and then the writers got involved in a writers meeting. X-Men: Fatal Attractions was me and Scott (Lobdell) and Larry (Hama) and Peter (David) all together because it was all one issue. Phalanx Covenant was almost all Scott and Age of Apocalypse was all Bob and Scott. 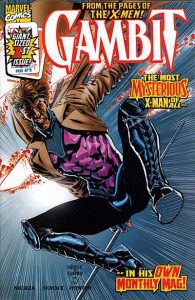 You’ve written for Gambit, any insight into the upcoming film? Is Channing Tatum a good or bad Remy LeBeau?

I think Channing Tatum is a great choice quite honestly. I happen to like Channing Tatum a lot. I really do. I think he’s a great choice not the least of which is that he likes the character and wants to do it. I have no idea what they are going to do with the movie. I just heard a rumor today that Mr. Sinister may be in it which makes a lot of sense. My personal preference for Gambit was not necessarily doing the adventures of Gambit as a feature film, my personal preference for a live action Gambit was always teenage Gambit. Romeo and Juliet with the Assassin’s Guild and the Thieves Guild as a television series. That was always my preference… I was actually working on a Gambit novel in the early aughts but the whole contract got pulled between Marvel and the outside licensor…I always thought quite frankly Gambit worked better outside of the X-Men then he does in the X-Men. My only hope is that they do a really really stylish, fun heist movie but also create an interesting core character conflict where there is no right answer for him because those are the best stories for him.

Black Panther is out in theaters February 16.

Check out Black Panther: Soul of a Machine, here. 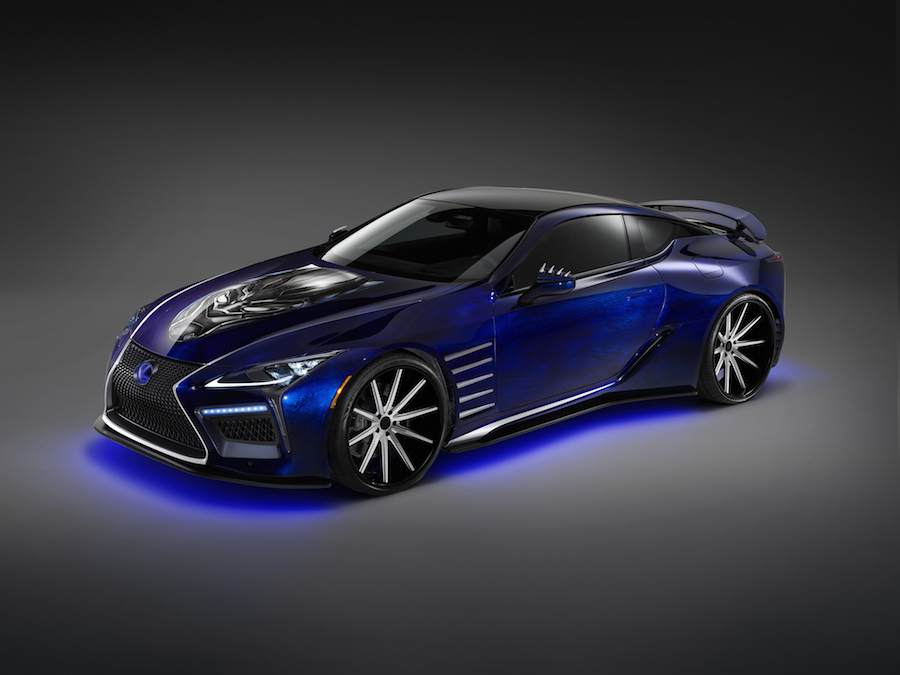