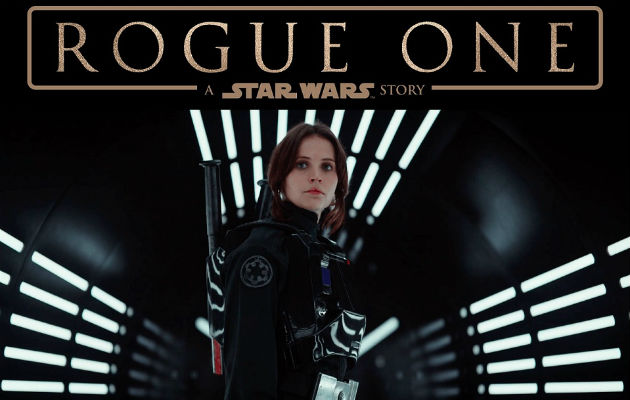 Entertainment Weekly is coming at you everyday with their series, Rogue One Revelations, gearing up for the digital release happening this Friday, March 24th and the Blu-ray release April 4th.

RELATED: ROGUE ONE Is Soaring Into Your Home This Spring

Today is the first of many revelations, and an alternate ending is discussed. SPOILERS AHEAD!

If you didn’t get a chance to see it in the theaters and have been waiting for the home-viewing experience, leave this page and go and checkout our Geek Girl Cantina’s Weekly Wrap Up, right now!

We knew going in what Rogue One: A Star Wars Story would be about. A band of rebels stealing the plans to the Death Star. Initially, we weren’t sure who the players would be or how the story would play out.

As time went on, and news about casting happened and trailers were released, we got what we wanted. It would be a war movie. But because it’s a Disney owned property, how dark would this movie actually be? Apparently the writers went through the same conundrum.

EW got the scoop from writer, Garry Whitta. The initial reaction was that everyone should die. They had always intended that that would happen, but came up with an alternate “happier” ending, with some of the heroes surviving the mission.

The original instinct was that they should all die, It’s worth it. If you’re going to give your life for anything, give your life for this, to destroy a weapon that going to kill you all anyway. That’s what we always wanted to do. But we never explored it because we were afraid that Disney might not let us do it, that Disney might think it’s too dark for a Star Wars movie or for their brand.

Here’s a summation of the alternate ending. First, lets point out that there was no Bodhi Rook, Chirrut Imwe, or Baze Malbus. That means we wouldn’t have had the gift that is Donnie Yen.

Instead Jyn Erso was a sergeant in the Rebel Alliance and that she and an earlier version of who would become, Cassian, would steal the plans along side security droid, K-2SO.

In every draft of the story, K-2SO always bite it. Which is the part of the movie that sent me into spiral, but in the alt-version Jyn and Cassian live and this is how:

The Death Star emerges from hyperspace to lay waste to Scarif and protect the Empire’s secrets by destroying the special weapons facility along with the Rebel incursion.

But this time there was no last-second broadcast of the plans from a satellite tower. Jyn and Cassian were to escape the surface of the beach world carrying the data tapes.

“A rebel ship came down and got them off the surface,” Whitta says. “The transfer of the plans happened later. They jumped away and later [Leia’s] ship came in from Alderaan to help them. The ship-to-ship data transfer happened off Scarif.”

Darth Vader was still in pursuit and began attacking Jyn’s shuttle as the Rebels tried desperately to transfer the information from the data tapes to Leia’s vessel. Finally, Vader was successful in breaching their shields and destroying the craft.

The audience would have been left fearing the heroes were dead. But as Vader’s Star Destroyer ventures off to chase Leia’s Tantive IV, we would have remained focused on the shuttle fragments floating in the vastness of space.

“They got away in an escape pod just in time,” Whitta said. “The pod looked like just another piece of debris.”

The creative team didn’t like this ending at all and fought to change it. I love what Whitta tells EW in regards to why that had to happen:

“The fact that we had to jump through so many hoops to keep them alive was the writing gods telling us that if they were meant to live it wouldn’t be this difficult,” Whitta says. “We decided they should die on the surface [of Scarif,] and that was the way it ended. We were constantly trying to make all the pieces fit together. We tried every single idea. Eventually, through endless development you get through an evolutionary process where the best version rises to the top.”

Everyone dying gives more gravitas to the rest of the movies. When you watch Star Wars: A New Hope the stakes are so much higher, now that we understand  and feel the weight of what was sacrificed.

When the digital and Blu-ray releases happen, I encourage you to watch the movies back to back, starting with Rogue One, all the way to Star Wars: The Force Awakens. I mean, do or do not watch the prequels, I leave that up to you, but I gather the original three will mean a little more to you.

Lots of thank you’s to Kathleen Kennedy who saw a good story and had the courage to tell it.