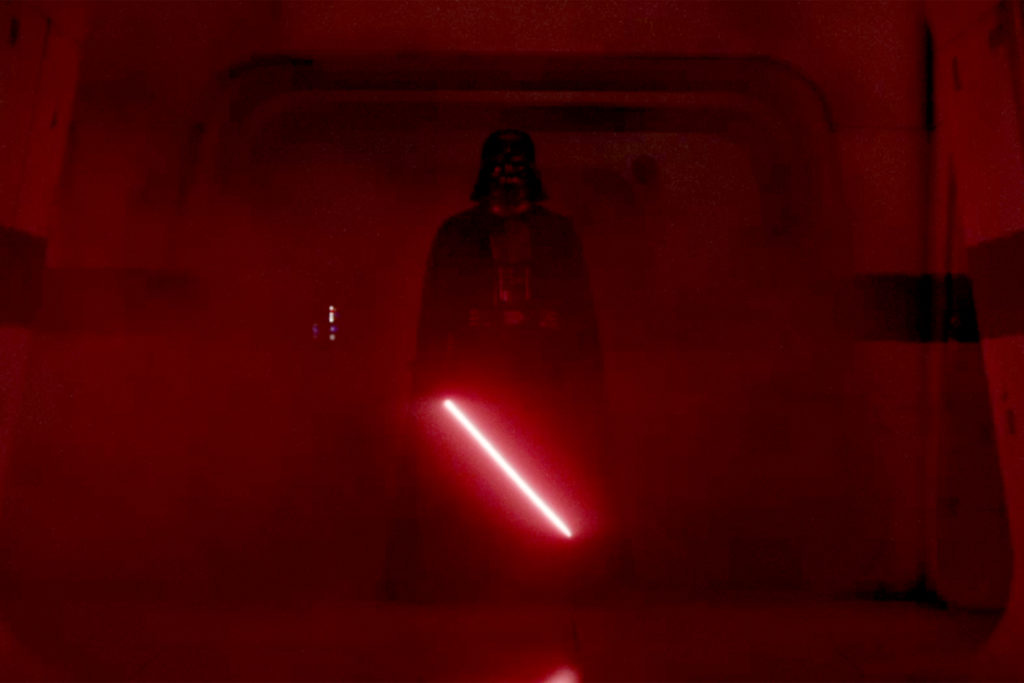 Today we get a Darth Vader featurette exclusively from EW’s countdown to the digital and blu-ray release with their series Rogue One Revelations and we learn a couple of interesting things.

The script went through a few drafts with a few different writers with Gary Whitta penning the original and a couple of other drafts by Chris Weitz and Tony Gilroy. Vader’s story changed pretty frequently with each of these writers different perspectives.

Picture this: the Death Star shows up on the horizon of Scarif and does the same partial blast that we see in the finished movie — scorching the surface of the tropical world and demolishing the Rebel uprising along with the Empire’s weapons facility.

Back in this version of the story, Jyn Erso and the character we came to know as Cassian Andor escaped with both the data tapes and their lives. The villain of the story, Director Krennic (played by Ben Mendelsohn) also survived the battle, although barely.

Instead of lying wounded on a transmission platform while the green beam of the Death Star literally incinerates him on its trajectory into the planet, Krennic found shelter from the blast. In what sounds like a type of epilogue to the story, we would have seen his rescue by Imperial forces.

“They tore him out of the rubble and they brought him back,” Whitta says. “When they’re going over the ruins, he somehow survived.”

If this seems unlikely … yeah. It really was. The writer had to concoct a reason that Krennic was able to find safety from the planet-punching laser and explain in reasonable terms how he could survive even the blistering aftermath. “It’s a bit of a reach,” Whitta says, “which is why it isn’t in the finished film.”

It’s always fascinating to hear about previous storylines, especially with movies like Rogue One that worked so well with the final product. How much would it have changed the success of the movie if these slight storylines had stayed in one of the original drafts.

Check out the featurette:

Rogue One: A Star Wars Story has it’s digital release this Friday, March 24th and on Blu-ray April 4th.