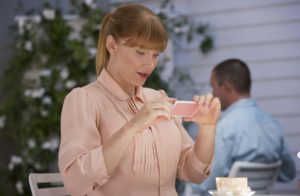 Black Mirror series 3 (the first series done by Netflix in partnership with the BBC anthology series) opens with the episode “Nosedive”. This episode features guest performances from Bryce Dallas Howard and Alice Eve. Note, this recap is NOT spoiler free. Proceed at your own risk.

In the world of “Nosedive”, Appearance really is everything. A ranking system of 1-5 designates privileges and prejudices in a society where social media posts can effect your ranking. Everything is ranked, interactions, skills, appearance, and overall cheerfulness.

The episode opens on a woman named Lacie (we learn as she passes a group of friends) running in a suburban neighborhood, interacting on social media as she runs. Lacie (Bryce Dallas Howard) posts a picture of herself on social media, and begins going through other’s feeds, rating them all 5-stars. 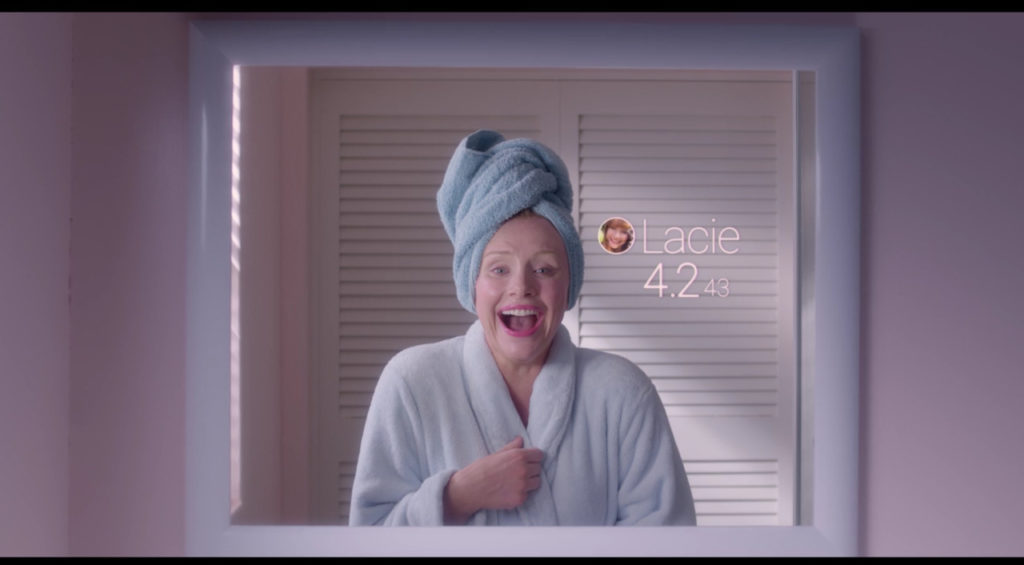 After her post-run shower, Lacie practices laughing and smiling in the mirror. As she does this, she watches as friends apparently rate her reactions via social media.

She goes to the kitchen to finish getting ready and disturbs her brother, Ryan, while he plays a virtual reality game. The discuss plans to move out and she says she is looking at more houses over lunch.

At breakfast, she studies the feed of someone nearby, who has shared a video of his son playing fireman. As she receives her coffee from the barista, they mutually rate each other on their interaction.  While she uploads a photo of her coffee, several people rate how she looks while she eats it and their interactions with her.

When she returns to work, she runs into a woman named Bethany. They are unable to communicate without going through each other’s social media feeds for something to talk about. They mutually rate each other. Lacie is disappointed with her rating from Bethany.

Less than a 4 is considered bad, unlikeable, and undesirable. With some unknown consequence occurring should one’s status drop below 2.5, a sudden slew of anonymous ratings at work drop Lacie’s own status down to a below a 4.2, after she interacts with a co-worker who has a low status.

During lunch, Lacie goes to shop for apartments. She wants to live in a specific community called “Pelican Cove”, especially after watching a video of her dream man, a hologram, coming down the stairs and living with her. While talking with the apartment manager, she is shocked by the weekly price to live in the complex. The manager informs her that if her standing were a 4.5 or above, she would receive a 20% discount.

After her meeting with the apartment manager at Pelican Cove, Lacie goes home to have dinner, where she goes over an old friend’s social media pages, rating everything 5 stars in her nostalgia. Her brother, Ryan, comes home and finds the brochure. He scoffs at his sisters desires. She notices that his own rating is 3.7, considered unfavorable. She ignores his comments and decides to go to image counseling to see what she can do to raise her own score. 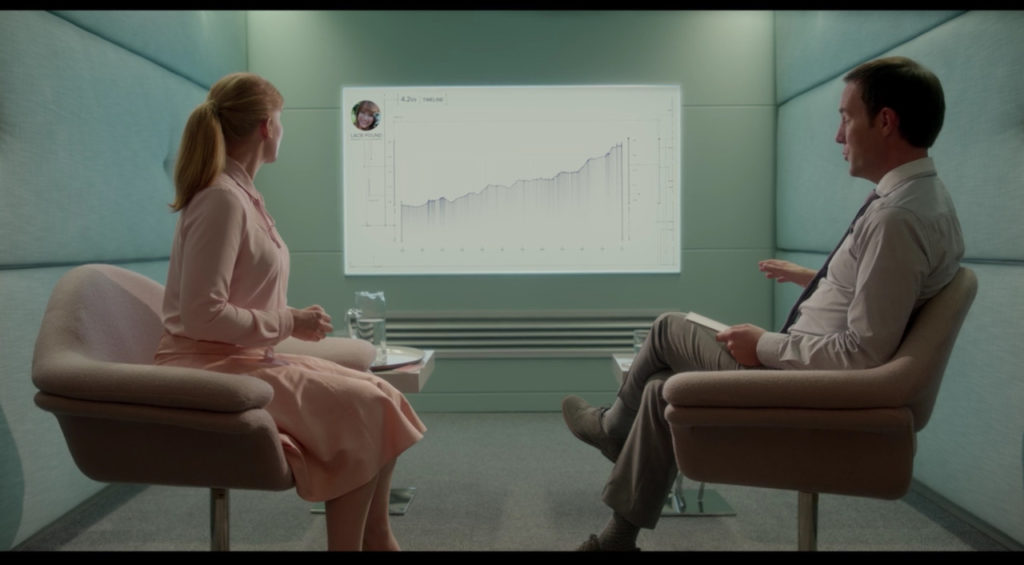 When Lacie goes to the image counselor, she is shown a steady graph of her score dings and upticks that he calls a popularity arc. The analyst says it could take her about eighteen months to reach a score of 4.5 or higher. She asks what she can do to boost her score faster. The analyst suggests she interact with more high quality folk (people with a ranking of 4.5 or higher) in order to boost herself up.

After her meeting with the popularity analyst, Lacie goes for a run and rates a woman named Naomi (Alice Eve) 5 stars across the board for each of her posts. When she goes to work the next morning, she interacts with more people at the cafe outside, and rates them all favorably. However, outside the office, she runs into the person who caused her score to go down, Chester, who, due to a social mishap has suffered his own popularity downturn. Chester cannot get into the building because his score has dropped below a 2.5. He begs Lacie for “just a few stars” so that he can get into the building. But, because people are watching, Lacie denies his request.

Upon entering the elevator, she encounters Beverly again. She offers her a croissant, because Beverly is one of these “high quality” people she is trying to impress. Beverly thinks she is trying too hard and gives her a low score.

At work, Lacie consults the popularity analyst again. He tells her not to try too hard, as this will make her score drop. Before she is able to ask another question, he signs off and leaves her at work alone. She keeps a doll behind her desk, and she moves it to the front to try to be more authentic, taking a picture to share on this world’s version of Instagram. The doll’s name is Mr. Rags.

When Lacie gets home that evening, she tries out a new recipe to post pictures on her social media. Her brother harasses Lacie until she manages to spill some of the tapanade she is making on her shirt. She realizes she is getting a phone call from Naomi. She hurries to cover herself with a scarf in order to appear clean. Naomi has called to talk about Mr. Rags, a doll she and Lacie made at art camp when they were five. While they talk on the phone, Naomi excitedly reveals that she is getting married. Since Naomi is a high 4, Lacie jumps at the opportunity.

When she hangs up, her brother reveals that her relationship with Naomi is more frenemy than friends forever. Naomi has apparently slept with someone Lacie held dear at one point, named Greg. Lacie denies that this has ever happened, and her brother continues to taunt her.

Lacie goes back to the popularity analyst who goes through the guest list for the wedding. The guest list is very favorable and the analyst recommends she go.

On her afternoon run, Lacie calls Pelican Cove and transfers money to take the apartment. Carole, the realtor, tells her she is still on a 4.2, and Lacie replies that this is not a problem. She transfers the non-refundable first payment in full.

She tries the speech out on her brother, who is thoroughly unimpressed with Lacie’s fake emotion. Lacie again explains what going to this wedding will do for her popularity. He asks her how she feels about Pelican Cove and tells her it was not smart to already transfer the money over. She scoffs and leaves for the rehearsal dinner.

When Lacie arrives at the airport the day before the wedding, an unfavorable rating from her cabbie (who found her annoying) bumps her score down to a 4.1. When she gets to the desk, she learns from the woman behind the desk that her flight has been canceled. All other flights she could book she needs to be a 4.2 or above. Because of this, the airport says she is unable to make her flight.

Lacie becomes upset and swears at the woman behind the desk. The woman says there is nothing else she can do, and when Lacie swears again, she calls airport security, who doc her score a full point for 24 hours, and award her double point loss on each negative rating for 24 hours. This bumps Lacie effectively down to a 3.1, and, after another unfavorable rating from the woman behind the desk, drops her down further.

Because Lacie is unable to get a flight, she needs to rent a car. However, her score is too low to enter the express line, and, her score prevents her from renting anything other than an old, outdated electric car. The car is so old and outdated that when she turns it on, the language option is stuck on Czech, and it is hard to start the car.

Once she gets the car sorted, she calls Naomi to inform her she might be late to, or miss the rehearsal dinner. Naomi is upset by this. While she is on the phone with Naomi, she sorts out that her car is almost out of battery life.

Lacie arrives at the electric station and realizes the plug doesn’t fit her car. She approaches the attendant, who is not shocked that she couldn’t get a charger. He bumps Lacie down in ranking because they didn’t have a meaningful encounter.

Lacie decides to hitchhike the remaining way to the wedding. However, because of her low rank, people are not willing to take her into their cars. That is, until Susan, a trucker with a score of 1.8 pulls over and asks that she get in. Initially nervous because of Susan’s low score, Lacie checks the truck. Susan explains that when her husband was dying of cancer, his rank wasn’t high enough to get a bed at the local hospital. After his death, she decided to forget about the social media rankings and just say what she wanted, which was why her score was so low.

This conversation with Susan might begin to change Lacie’s mind about the systemic nonsense of the rankings and their hold on the world. Susan lets Lacie out at a rest stop, and Lacie cons her way into a bus full of people going to a ComicCon type event. While she is on the bus, she receives a phone call from Naomi, who tells her not to come to the wedding. Her score is too low and she wouldn’t make a good maid of honor anymore.

In her rage, Lacie gets herself kicked off the bus, about an hour away from the wedding. She borrows a bike from a local, and rides to the club where the wedding is taking place, sneaking in. 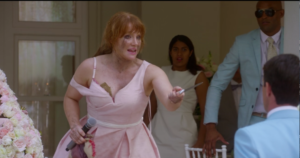 She gets to the wedding reception to deliver her speech. Naomi is chagrined, and wants her taken out. While she is giving her speech, she is chased by security and deducted by people around her. She threatens several attendees who mark her down.

Lacie is finally escorted off the premises. She is arrested. Her phone is taken away. She gets to the jail cell, and out of habit, makes the motion to rank the man across from her. She pulls off her dress and tells him not to wonder why she is in the cell.  They begin to tease and swear at each other. The teasing is flirtatious. Lacie smiles. Lights out.