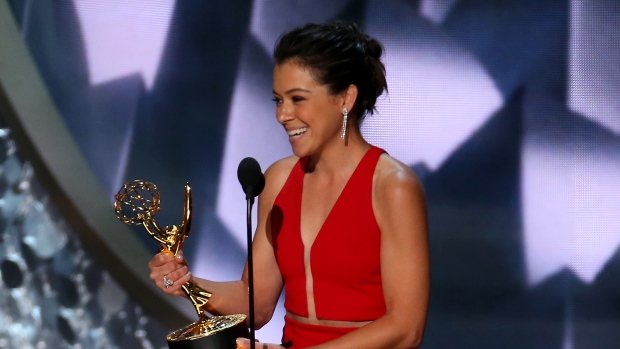 The 2016 Emmy Awards happened last night and there were some very exciting moments that should be recognized! This year’s awards had a couple of tried and true usuals that won but this was also a great year for some truly deserving artists to get the statue.

I don’t believe you can judge art but what this platform provides is recognition for those who aren’t equally represented and this year, at the Emmy’s, there was progress.

From our girl, Tatiana Maslany to Kate McKinnon, women ruled the Emmys as did sci-fi/fantasy and comedy.

Here are some highlights from The Emmys 2016:

Kate McKinnon Wins – This girl has been a standout performer on Saturday Night Live since she joined the show in 2012. Kate was also a a favorite in the new Ghostbusters as Dr. Jillian Holtzman. Basically, Kate is wonderful, beautiful and uniquely funny and I’m so excited for her win!

Jimmy Kimmel And Matt Damon Continue Their Feud – Must be one of the longest running jokes in history, but always funny. It was hilarious to see Matt Damon busting Jimmy’s chops right after losing the Emmy to John Oliver.

Key & Peele Win Best Outstanding Variety Sketch Series – SO DESERVED! The nicest guys in comedy and so genuinely funny, I was ecstatic to see Keegan-Michael Key and Jordan Peele win especially since the show isn’t coming back. P.S. if you haven’t seen Keanu, do it now!

Rami Malek Wins For Mr. Robot – His first nomination and win. It’s wonderful to see the diversity of people and shows that are being recognized. Such a wonderful show and what a well-deserved win. Thank you, Rami, for acknowledging the “Elliots.”

Tatiana Maslany Wins For Orphan Black – All I can say is, about time! Also, thanks Kiefer for being the new John Travolta.

There were so many other highlights, Aziz Ansari winning a couple of times over for the Netflix comedy, Master Of None, Game Of Thrones winning Outstanding Drama Series, Julia Louis-Dreyfuess dedicating her win to her dad, who just passed away on Friday. Louis Anderson’s win for Baskets, our best friend in the whole world, Steven Moffat, winning for Sherlock….all in all, a wonderful night for science fiction, comedy and diversity.