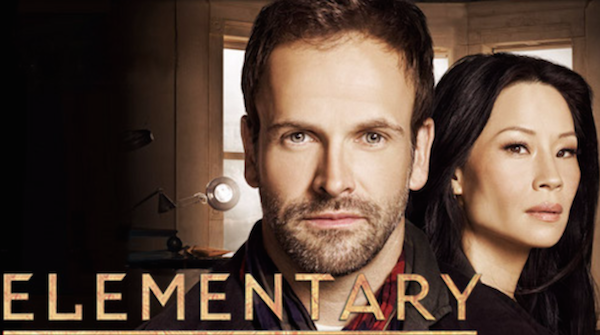 This episode of Elementary opens with Sherlock arriving home at the brownstone to find an antique chess table restored by Shinwell. Unfortunately, said table was an important piece of evidence in a 78-year-old cold case that Sherlock was trying to solve. After Shinwell awkwardly leaves, Sherlock goes to the kitchen and asks Joan if Shinwell is still part of his old gang, SBK. She tells him that she has hooked him up with a contact at the Bronx gang team, so that he can be a criminal informant for the NYPD. Before Sherlock can make any more objections, she leaves on a call from Detective Bell to the morgue. 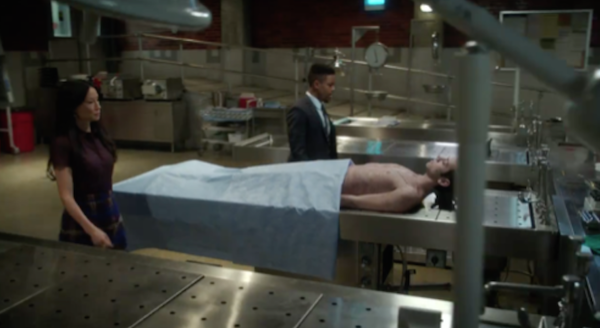 When she arrives, Detective Bell shows her a man who died of an overdose of opioids named Jeffrey Banks, and asks if she has ever seen him before. When she answers in the negative, he tells her that the prescription found at the scene was supposedly written by her, even though she hasn’t practiced medicine in ten years. In her interrogation, the Agent Ritter asks Joan about multiple prescriptions, none of which she knows about, but since they can’t prove it wasn’t her, she gets her recent medical license suspended.

Once out of interrogation, Joan determines that the prescription must have been filled out in Hoboken, as all pharmacies in New York City are now digital. However, the changed information is from a prepaid cell phone and a PO box, and therefore they can’t prove that Joan didn’t do it. Joan and Sherlock split ways, with Sherlock going to the Bronx, and Joan heading out to Hoboken. While in New Jersey, Joan discovers that the information on the prescription sheet contains her Chinese name, information that she used at a hospital back in Queens. 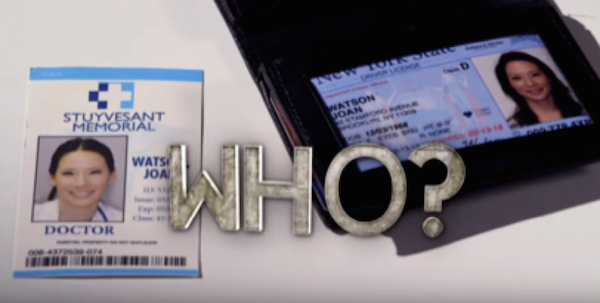 When Joan gets back to the brownstone, Sherlock tells her that he had already checked the hospital in Queens directory, and that three other doctors had had their information changed as hers had. He also tells her about his meeting with the Bronx detective, Detective Guzman, and his misgivings about having Shinwell be an informant for them, as he feels Shinwell has no survival instincts or skills, much to Joan’s fury. Before she can make more of her displeasure known, the pair get an email from Detective Bell, saying that he has determined the thief is a Dr. Franny Krieg from Joan’s old hospital. 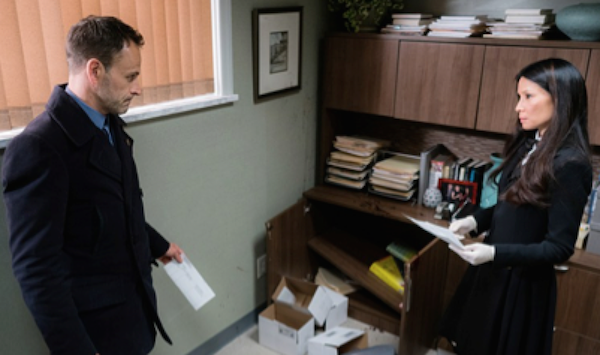 When they get to the hospital, they find a crime scene, with both Dr. Krieg and the woman she was meeting with, later determined as Marla Moore, shot to death, and five boxes of prescription pads stolen. To determine why Mrs. Moore had been at the scene of the crime, they go to her home to talk to her ex-husband, Patrick, and their son, Ethan. Ethan is very sick with what they doctors call “nonspecific autoimmune disorder”, which he says means that they have no idea what is actually wrong with him. Mrs. Moore was meeting with Dr. Krieg to discuss alternative treatments for Ethan’s sickness while Ethan was at home doing physical therapy. Patrick was with a friend, watching a golf tournament. Joan asks Ethan if he noticed anything unusual at the office recently, and Ethan tells of a man that could have possibly been a junkie sitting in the waiting room one day. The man had gotten very angry when Dr. Krieg asked him to leave, but he did leave, prompting the team to look for this strange man.

Later that day, Shinwell is canvassing for cops with a SBK member, before seeing a rather large man across the street. Shinwell bolts to the brownstone, thinking that the man is following him. However, when he makes it to the brownstone, the man turns out to be a friend of Sherlock’s, as he was trying to make the point to Shinwell isn’t cut out for criminal informant work.

Meanwhile, the bullets from the scene of the crime came back from the lab, and Detective Bell discovers that the bullets came from a two-year-old mugging. However, when the team brings in the victim, Sherlock determines that the man was really trying to carjack the man who shot him. As it turns out, the man that the gun belonged to is Patrick Moore, and his dead wife was the heir to a large furniture store fortune. If Patrick killed Marla, it means that he will inherit all of her money upon her father’s death as Ethan’s caretaker. Patrick’s earlier story of watching a golf tournament is found to be no longer a viable alibi, and the gun is found to be missing. Joan goes to meet with Ethan, but when she brings up the possibility that his father killed his mother, he shuts her out and asks her to leave.

Back at the precinct, the team finds out that Patrick had a pizza delivered by the time of death, making that his alibi checks out once more, which puts them back at square one for finding the killer. Joan concludes that Marla was poisoning Ethan with her father’s pills to keep him dependent on her, causing Munchausen by proxy. Burner phones owned by Dr. Krieg had several messages from Marla, calling the doctors whose identities’ the doctor had stolen, and she told Ethan what his mother had been doing to him. In his rage, Ethan contacted the addict from Dr. Krieg’s office to give him a ride, skipped a physical therapy appointment, stole his father’s gun, and shot both his mother and his doctor, shooting Dr. Krieg to cover up the fact that she knew about what Marla was doing to Ethan. Ethan is found in a hotel with the gun, and brought back to the precinct. He asks Joan if the police will show him leniency due to his illness, and she tells him that because he killed Dr. Krieg in cold blood, he will be put away for life.

The episode ends with Shinwell being brought in as a criminal informant, and when he arrives home to his apartment, he finds Sherlock sitting there to offer him a deal; if he’s going to be a criminal informant, Shinwell must be one for both the NYPD and Joan and Sherlock. He must also undergo training under Sherlock, to which Shinwell accepts by playing a game of chess on the antique chess table that he restored.