HOW REVENGE REALLY PLAYS OUT

It had five stars as per my NetFlix rating; movie review sites ranted and raved; its story was compelling, and the cover image that greeted me every time I thumbed through my queue beckoned; subtle, as if to say “watch me, I promise to be better than the noise you generally put on as background dribble while you browse humor sites on your phone.” So I did, finally, and after many gasps, and laughs, and general “on the edge of my seat” moments, I gave the movie five stars of my own and promised to pass along its wonderful tale. 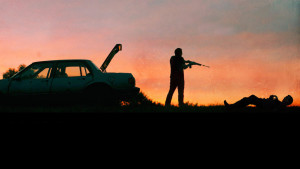 “Blue Ruin” is an independent movie brought graciously to our presence by director Jeremy Saulnier, and is first and foremost a tale of revenge. But more importantly, it’s an emotional recount of personal development, truth, the limits of human capabilities, and more than anything, the drive behind a person who’s been pushed so far to the edge that he’s left with nothing at all; which leaves him willing to risk everything.

There are a few major things I learned while watching “Blue Ruin”:
1. Men look better with beards.
2. Revenge is a dish best served cold, or even better, not at all.
3. Things aren’t always what they seem.
4. Adultery leads to murder almost 99 percent of the time (it’s a fact, I’m almost positive).
5. Removing an arrow from one’s own body almost never goes as expected (recalls scene from “House of Wax” with Bo Sinclair).

On this emotionally charged journey, Dwight Evans (Macon Blair) embarks on a mission for revenge after finding out that the man who murdered his parents is being released from imprisonment. For him, it isn’t a question of if he’ll hunt down Wade Cleland, Jr., but how he’ll do it, and though the process is unplanned and sloppy, the swift killing of Wade acts as a catalyst for the remainder of the movie, in which Dwight faces the consequences of his actions (not to mention some miffed hillbillies). 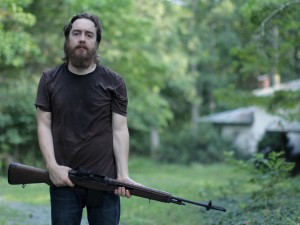 Dwight is blunderous and unskilled but doesn’t care; it’s his ultimate end that justifies the horrific means. The quiet, unassuming character develops throughout, and ends as a powerful figure if just for the fact that he embodies the human equivalent of utter loss. He’s quiet; and while this certainly lends to his mystery – to his perceived introverted nature and only slight creepiness – it was an intentional directional decision fixed on changing the fact that “there was a lack of traditional visual storytelling [in the indie world],” according to Saulnier. There wasn’t an inherent need for useless muttering or dialogue that nudges the story along as if to say to the viewer, “this is what’s happening in case you missed it in the scene;” the actions speak much louder than the sparse words.

Macon Blair does an unnerving job of playing Dwight; I rarely felt like I was even watching someone act, his emotions were so real. When he’s angry, it’s with conviction; when he’s sorry, I believe him, despite the fact that it’s in the midst of blowing a nice hole in the center of someone’s screaming chest. I didn’t love him, but I didn’t hate him either; he was a neutral character; blaringly human. 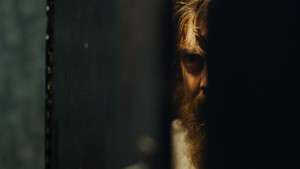 There are subtle nuances laced throughout the film that serve to take the viewer out of the intensity of the moment and remind them that beyond this tragic, “gore-ific” world still lies something normal, which is strangely disquieting. Just before Dwight enters the bar to murder Wade, Jr., he looks up to notice a commercial jet streaking vapor trails across the sky; and at the end of the film, amidst the chaos of what happens after, the shot focuses on a civilian casually running by the crime scene, oblivious to the tragedy that’s taken place (not to mention the arrow that narrowly missed Dwight). They’re small moments, but in the thick of cold-blooded emotion they’re very humanizing – very intentional – details.

Likewise, Saulnier employs a few moments of comic relief that keep the movie from being overly serious, again making it unsettling in the fact that it’s somewhat likely, so real. When Dwight and his sister Sam (Amy Hargreaves) are immersed in a fraught conversation, the man seated behind them interrupts by asking for a bottle of ketchup, completely undermining the fact that Dwight has just admitted to murder. And after Wade’s older brother Teddy has been trapped in the trunk of Dwight’s car, he emerges mid-firefight and complains about how his legs are asleep. Again, it serves to remove the viewer from the moment just briefly, before throwing them into the fire immediately again.

(THE NEXT TWO PARAGRAPHS CONTAINS SPOILERS – SKIP AHEAD IF YOU WISH) 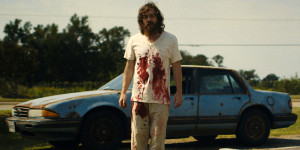 There are also a couple of not-so-subtle-but-still-extremely-potent moments that Saulnier includes, which take the movie to the next level in terms of depth and conformity; when the viewer discovers that William (the poor young man trapped in the limo in the beginning and then in the middle of a bloodbath in the end) is Dwight’s half-brother born of adultery, it reminds us that the impetus behind the entire plight is love; even in its most dark and twisted form. And the very last scene of the film is of Dwight’s postcard to Sam, which shows us that despite everything, the world keeps turning (also Amy will probably throw that thing away immediate, thanking Dwight for momentarily ruining her life). They are minute details that aren’t necessarily critical plot points, but they serve as the icing on the cake of an already solid story.

In the film, when Dwight’s longtime friend Ben (Devin Gaffney) says to him, “this is personal, that’s how you’ll fail,” it sums up the theme of the movie in that no matter what happens – no matter what truth Dwight discovers, or physical ailment befalls him – he keeps going. Whether it’s a “nothing to lose” mentality or a passion for his family driving him doesn’t really matter; the fact is that he continues literally to the end, during which he reaches a draw (or he wins, depending on how you look at it) that leaves no one but his half-brother standing.

The movie communicates a message that the loss of a family member essentially reduces all social structuring, and leaves a shotgun-sized hole in the façade of advanced humanity. When faced with the circumstance, both parties are moved by an animalistic drive for vengeance. There is no social order; there are no authorities involved (the logical path for most functioning human beings); there isn’t even a dialogue, because at the end of the day they each want to watch the other person’s world burn. 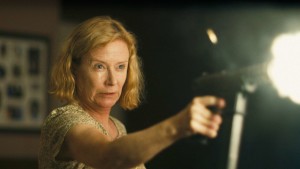 For an independent film, “Blue Ruin” has an impressive cinematic quality (not to mention some surprisingly brutal and realistic gore-factor). The shots are intentional, and often draw out more than what meets the eye. There’s no violence for the sake of violence, but rather loss of life with conviction. The overall realness of the film is what makes its subtleties that much more impactful; his reactions to the circumstances seem real; the dialogue (though few and far between) is authentic; the blood might as well be pouring out of a real freaking neck/jaw/gaping chest-hold because those kill scenes seemed so damn real; which is why they have a lasting effect.

It’s a movie that’s available to a wider audience than most action-thrillers due to its approachable characters and depth of storyline (though not for the faint-of-heart, clearly). There are cringe-worthy moments that will have you writhing in empathetic pain; but there are also laughable moments for both good and evil sides (apply distinctions as you see fitting), which made it an interesting and worthwhile watch throughout. Saulnier does a fantastic job of humanizing otherwise untouchable characters, and Blair’s performance only solidifies the fact that average people placed in atypical situations ultimately meet an end; whether or not it’s a heroic – or sadistic – one, is for you to decide.

*All of the character and actor names were found on “Blue Ruin”’s Wikipedia page.