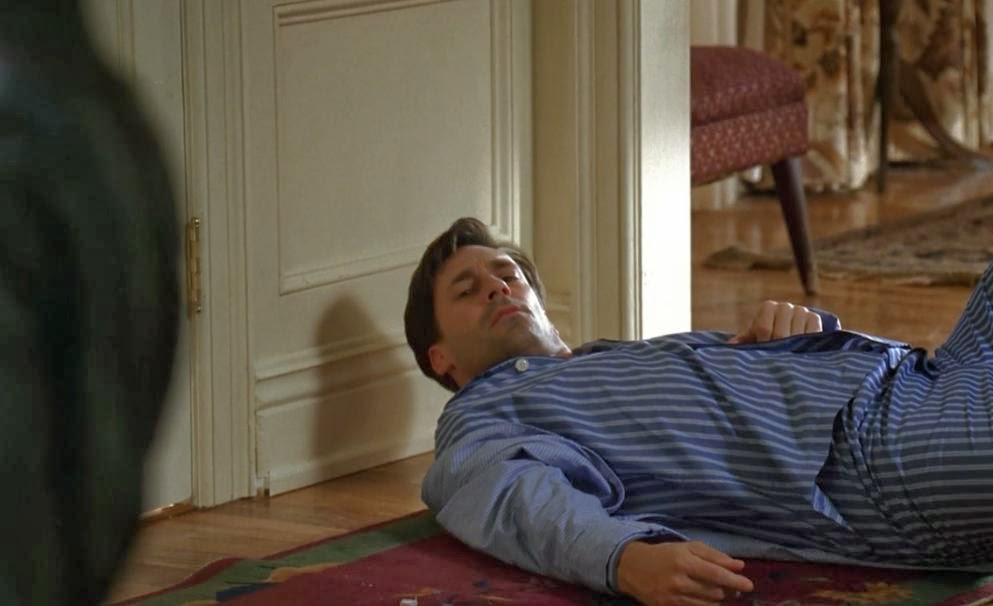 It’s hard doing Drunk Men when you’re sick – so big hugs to you dear reader, you weren’t neglected. We’re back on your liver-ruining schedule this week.

This week’s episode of Drunk Men is brought to you by the drink:  Tequila.

Just Tequila. Anejo specifically. Nice and simple, over ice. Because I’ve been sick yo, and some sweet Anejo doctor ordered*.

The episode opens on some toast and really disgusting looking… orange juice? Is that what that is?

Seriously, it had a huge thing of slop in there. SLOP. Like… gak? Remember gak? Or like a ball of mango pulp, but more syrupy? It’s orange and sloppy and disgusting and wow this is making me think about politics *stop*. 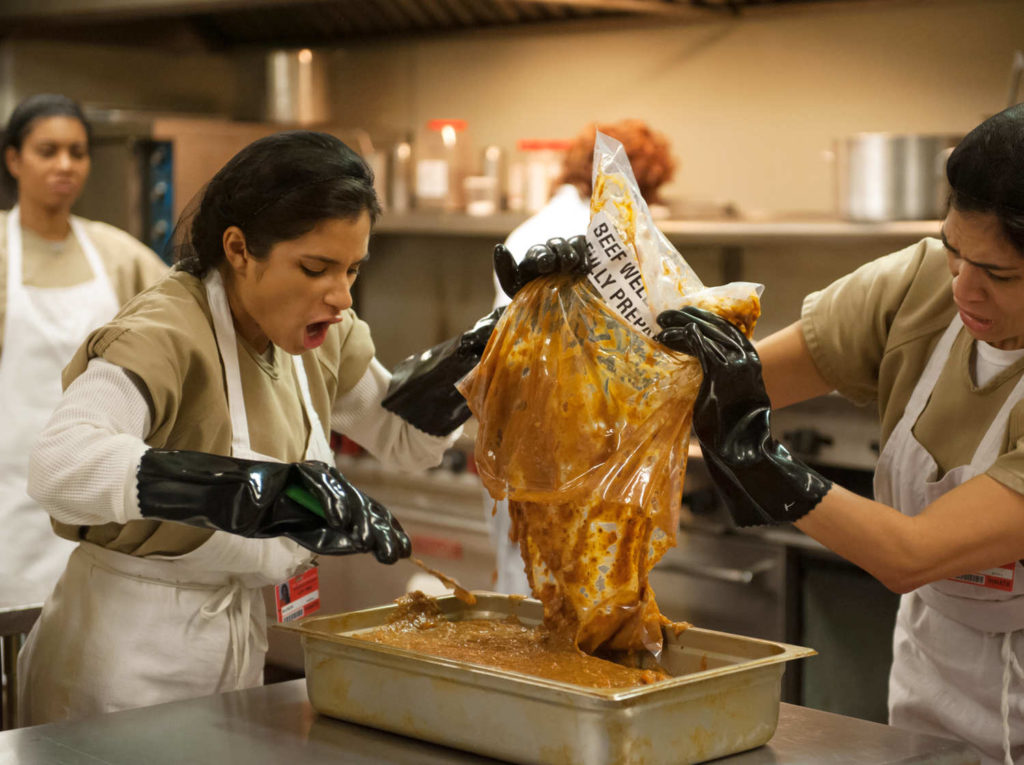 Seriously. It could have been this.

The disgusting OJ and toast don’t get very far because surprise Hamm tries to carry them up on a tray to Betty for Mother’s Day but forgets that children leave toys on stairs so ends up falling backwards. OUCH. His memory flashes back to a time when he was told to not cry/feel pain/be human by what must be robotic family members (he’s half robot?!) before the memory disappears at the sound of children squealing that their daddy is on the floor covered in slop. TBH, I disappear when children shriek too.

That night toasted Hamm is reading a book called “The Best of Everything” (for robots?) and Betty freaks out over Joan Crawford’s eyebrows. Wait… did he just promise her plastic surgery? So that she wouldn’t have to age like a normal person? Oh goody, we’ve hit the part of the episode where I drink angrily over unrealistic expectations and double standards around women and how they aren’t allowed to age.

(But srsly Obama, call me – I wanna come hang out with your doggos).

When Don asks her if Betty had a good Mother’s Day her face couldn’t be blander. Yes she says. Well Betty – I don’t believe you. One of your kids got to bring home a balloon and you didn’t, WHERE’S YOUR BALLOON BETTY? WHERE IS IT? Did the day actually involve you getting to do *anything* you wanted to do for yourself? Or were you wrangling the kids while Hamm sausage was all like “you’re such a good mother, see?”

Tequila is a happy drink normally, but apparently when mixed with sexism it’s a f**king angry bird. 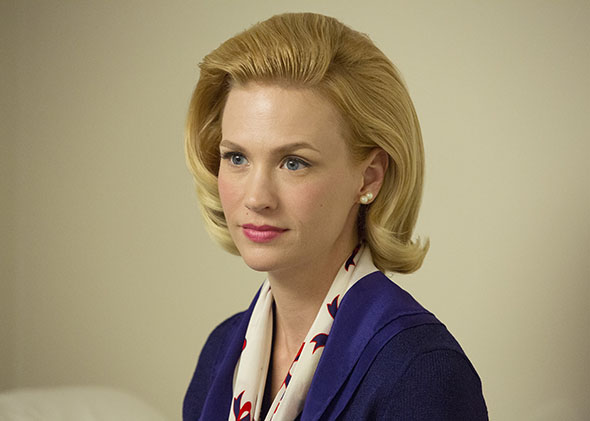 COULD SHE LOOK MORE BORED IF SHE TRIED?

Betty discusses mother’s beauty. Hamm loaf is weirded out because her mother is dead, and Y U talk about dead woman wife? Dead woman = not sexy. Not sex = not interesting. Y U NO BE INTERESTING BETTY?

I am a carrot.

Betty brings up some things she learnt in therapy. Don, the ever supportive partner, says “mourning is just extended self-pity.” WTF Don???? Is this because you’re a robot and you can’t feel anything? Then he tries sexing her up (OH, maybe he’s a sex robot, that explains it). Betty attempts sexy talk by saying “I want you so much” but in a way that sounds like she’s wanting a glass of milk and a nap. She’s crying…

FINALLY the never-ending bedroom scene is over and we get back into the office for another client meeting. Today’s canape’s are white mousse thingys with truffles on them? Meh. Either way, it doesn’t look like fish, so I’d say it’s an improvement.

Basically every canape at a meeting EVER.

Boss man’s family are in the office and his daughter has some sass, and apparently has a thing for Don. So of course when Joan comes wandering over the young lady bows down to the QWEEN. Cut to a hotel room where boss man and Joan have had a very intimate lunch break, where somehow Joan manages to keep her hair ON POINT. After all the sex-in’. Wat???

All the talk about hot Jews leads shredded Hamm to call Our Lady of Perpetual Awesomeness Rachel. He “needs to see her” LOL wink wink, and she says it isn’t a good idea (YAS!) He thinks it’s important HAHAHA, and she’s wracked with HELL NO. He’s persistent *snort*. She reluctantly settles for lunch in an effort to get his sausage to calm down (after all, what could be done over lunch? Literally nothing, unless you’re Joan heyooooo!) 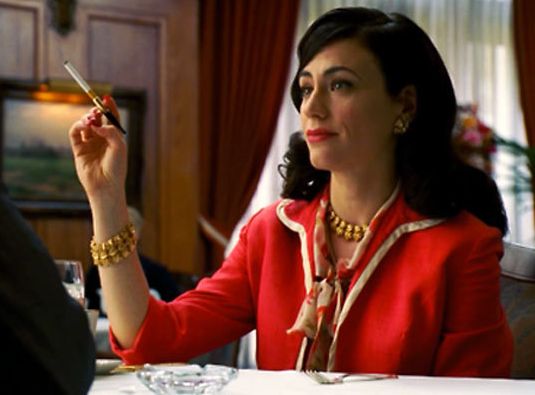 I am now, and always will be, better than you Hamm Pizza.

That night Betty confesses to Hamm pizza that her first kiss was from a Jew (gasp oh my goodness the shock and bother and just whatever Betty go and get yourself a freaking glass of milk). She then starts to passionately smooch tinned Hamm and he blows her off by saying it’s too humid and that he has to read a book. Wow. Way to be a downer dude… He’s clearly saving his sausage for Rachel.

In the office the guys are struggling to think up copy for lipstick because wimins be so confusing. Case in point: “I don’t speak moron, do any of you speak moron” – EXCUSE ME?!?!?!?!!

In an attempt to workshop their way out of stupidity, they get the office ladies in the room to try on the lipsticks. Men watch from behind a one-way glass and judge the sh*t out of the women (because who didn’t see that sh**ty behaviour coming…) One seriously classy guy says “anybody mind if I take off my pants” OMG someone squash him with a fly swatter PLEASE. And of course Jerk face comes in with food because it’s a spectator sport. Joan bends over just as boss man arrives and earns a literal salute/standing ovation from the boys. Poor Peggy sits there. Just… sits there. She’s not like the other girls. Is she confused? Bored? Turned on? Naieve? All of the above? 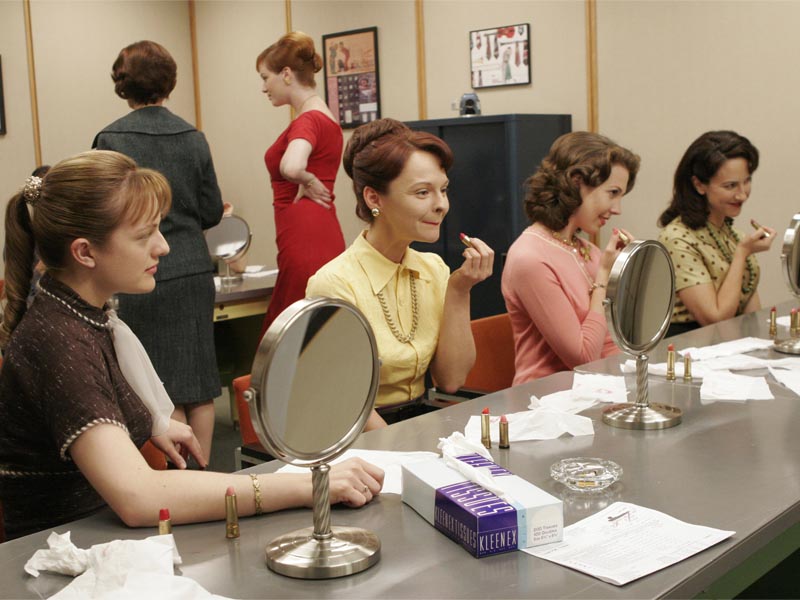 Or maybe she’s POISONED THE LIPSTICK

Meanwhile, Draper isn’t there coz he’s waiting for a Goddess to arrive for lunch. When she arrives- she’s perfect and gorgeous and he doesn’t deserve you Rachel. He makes irritating small talk and she bypasses it to talk about her store (like a BOSS). He goes back to “you look beautiful” and she stays super clinical. He changes tactics to see if she can help him with the tourism campaign but she’s too clever, “I’m not the only Jew in new York city” she says to which he replies “you’re my favourite” UGH and we all participate in synchronised eye rolling with her. He’s clearly flustered to be around her because he’s super-hot, and his sausage is super impatient but… she’s totally into the fluster?!!! No Rachel!!!!

Peggy hands a bin filled with blotted lipstick imprints to the guy in the room saying “here’s your basket of kisses” which is really cute and adorable. Basket guy then goes to Hamm spam and lavishes praise on Peggy, which makes me go awwwww… until he says her ingenuity was “like watching a dog play piano”. Don smirks. PUNCH HIS FACE RIGHT NOW.

DON’T LISTEN TO HIM PEGGY

Rachel calls her sister and tells her that she’s “met someone”. Oh god nooooooo don’t do it Rachel don’t do it!!!!

Peggy gets hired to write copy but it’s not a promotion. And she doesn’t get any perks out of it. Because obviously. (UGH, this episode, I just CAN’T EVEN).

Don goes to his mistress and is very aroused because sausage hasn’t had any action for, like, 48hrs guys, and it’s getting SERIOUS, I mean he might combust under all the PRESSURE. Mistress’ friend visits and conveniently interrupts their shenanigans, and adding insult to injury he invites them out (and Don is pissed.)

Joan goes to another hotel to meet boss man and he gives her a bird in a cage and OMG METAPHOR. Meanwhile sulky Don goes out with Mistress and her friend and the two guys immediately start bickering with each other about hair, jobs and WHATEVER oh please make it stop. It then becomes painfully clear that Mistress’ friend… is a Hipster.

WHAT? I’m done. What a hecking episode… 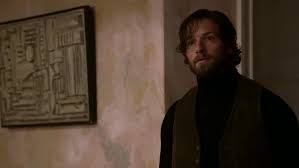 *What I ordered. I’m the doctor. Doctor drunk.