The actress found herself alone behind the microphone (co-star Kevin Alejandro was noticeably absent), but didn’t disappoint the host of Luci-fans waiting for her. As to be expected, much of the discussion centered around her portrayal of the demon Mazikeen on the popular Fox series.

Related: Check out our other Dragon Con 2017 coverage, here.

A recurring theme throughout the panel proved to be a discussion of what attracts fans to Lucifer. After all, the series (which Brandt described as a “the little engine that could”) managed to survive in a challenging Monday night time slot for two seasons. Season three begins October 2nd on Fox. Brandt opened up about a number of her insights:

We don’t show (the supernatural) aspect… you don’t see it every single episode… we’re rooted in reality. That’s why our audience is so broad. It’s a little bit of everything for everyone…

This accompanied analysis from the moderator and audience that this is truly what attracts fans to Lucifer. There’s comedy, romance, drama, and even police procedural aspects. “Our show depicts humanity in a positive way, which Lucifer finds through Chloe (Lauren German)… who is very much the heart of our show… (she shows him) the good things”.

Brandt continued, later describing the tremendous love and friendship which holds the cast together. “We genuinely love each other as a cast. I’ve worked long enough to know it’s not always like this… we’re all naughty in our own way…”. Brandt painted a picture of a fun loving cast, often playing pranks on one another.

While on-lookers waiting for the juicy details, she recounted a story involving series star Tom Ellis. Lucifer is known for his sleek look and his highly tailored suits. Brandt could barely restrain a mischievous look as she recounted an instance when he bent down and ripped his pants. With the Devil at his… most vulnerable… the cast took a number of naughty photos.

Related: Check out our coverage of Lucifer, here. 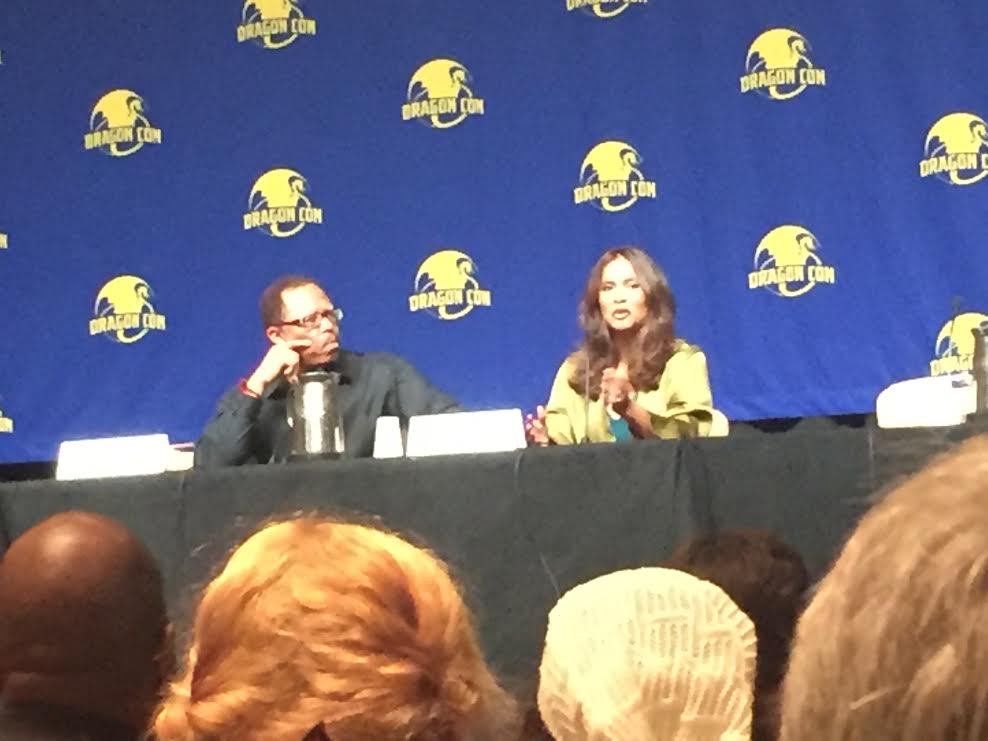 (The writers) planned for these juxtaposed characters to meet. They didn’t plan for the chemistry Scarlett and I had… (The fans) really loved it. This is a really important relationship on the show. Through Trixie you get to see (humanity’s) truthful moments…

Later, the panel dove into a really detailed discussion of stunt work on the show. Since Maze is one of the show’s more physical characters, she spoke to the subject with impressive detail. She described that she picks up choreography very quickly. As a result, she is not only able to do more complicated choreography, but she also enjoys doing most of her own stunts. Brandt described a story from shooting the series last year. When Maze and Lucifer fought towards the end of the season, they were in the middle of shooting when Ellis didn’t pull his punch in time and “clocked” her. She laughed as she admitted that she was four months pregnant at the time.

While the panel continued, Brandt spoke a little about the shows upcoming third season. The series is building to an interesting point for the demon. She expressed excitement about getting to explore some interesting new territory for Maze. Jealousy. Rather than Lucifer, Brandt revealed Maze’s jealousy is actually over her relationship with Linda (Rachael Harris). She also teased an interesting tidbit in the upcoming season, in which Maze gets her own standalone episode. According to Brandt, the episode is a 007 adventure where audiences follow Maze on a bounty hunt.

Finally, the subject of a Maze spin-off came up as the panel entered its final minutes. The question was a hypothetical one, with no rumors currently circulating. However, Brandt didn’t discount the thought, emphasizing the strength of Maze as a character. “I am very happy with our cast, but am not closed off to a spin-off. She’s a fun character, I love playing her. TV needs more strong women”.

The panel continued the strong Main Programming track at Dragon Con 2017. Brandt spoke about the show honestly, and her comment reflected enjoyment of the show which is riding a wave of popularity. Here’s hoping for more Lucifer panels next season.