It’s happened. Peter Capaldi‘s final episode of Doctor Who has ended. Although it does look like he’ll appear in the Christmas Special, he is no longer our Doctor.

When we last saw the Doctor and company, an unstated amount of time had passed for Bill (Pearl Mackie) on the lower deck of the giant colony ship while everyone else [except, as it turned out, the Master (John Simm)] was moving very slowly on the bridge, with the passage of time being affected by the ship’s proximity to a black hole. The Doctor, Missy (Michelle Gomez) and Nardole (Matt Lucas) had made it to the floor Bill was on some time after she’d been upgraded into a primitive Cyberman. Also, Missy and the Master had become BFFs.

When we rejoin the action, we learn quickly that 10 years had passed for Bill, and that the Doctor had arrived only two hours after her conversion. The Master had apparently been biding his time on converting her until he knew it would cause the maximum psychological pain for the Doctor, and mission accomplished. 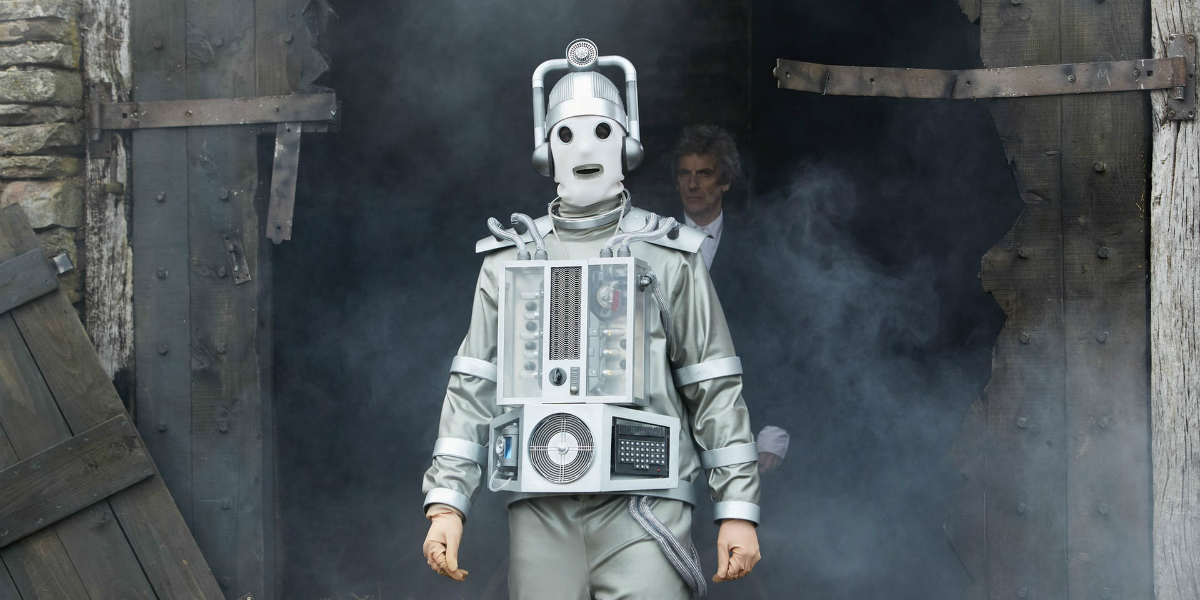 In addition to losing his companion, the Doctor appears to have lost his fledgeling ally. Missy and the Master tie up the Doctor and beat him unconscious as they debate how to kill him. They have him bound in a wheelchair on top of the hospital, with Cyberman Bill hovering in the background and Nardole disappeared to who-knows-where, as the Master gives a run-down of every diabolical thing he’s done and plans to do. Then, inevitably, the Doctor upsets his plans.

This time he does so by first undermining the implication that the Master has initiated the rise of the Cybermen. According to the Doctor, Cybermen are just one of those inevitabilities that happened to evolve on different human planets at about the same time, so no credit to the Master.

He also reveals that while the Masters were beating him, he fell on a keyboard and reprogrammed the Cybermen to believe that humans could have two hearts, so all of the Cybermen are about to converge on them and convert them. Since the only thing ever to defeat Cybermen is the Doctor, the Master makes a hasty about-face to free the Doctor and reluctantly accept his help.

The Cybermen appear! And so does Nardole, who has procured a shuttlecraft and found them on the rooftop, ready for a rescue. Missy and the Master are first on board, and a Cyberman incapacitates the Doctor. Cyberman Bill is there to help him, though, and she helps him aboard, so that they can all blast through the ceiling and force their way up to a more hospitable floor on the ship. (So, so flat and tidy. If this weren’t such a significant finale, and this were the end, this episode would be neck-and-neck with “The Lie of the Land” for worst ever.)

The shuttlecraft blasts into a floor that’s a “solar farm,” mimicking an Earth-like agricultural setting. A young black girl discovers them– a girl who bears a strong resemblance to Bill that is never addressed, BTW.

The girl belongs to a community that is occasionally attacked by Cybermen who take their children. She and other children are kept together in a farmhouse, and the adults on duty shoot any Cybermen who come at them and then hang their bodies as scarecrows. These are the hospital gown/sheet wearing variety of proto-Cybermen we encountered in the hospital, and they make hella creepy scarecrows.

The community welcomes our group into the farmhouse, caring for the wounded Doctor and allowing Cyberman Bill to sleep in the barn. Although the Doctor has vouched for her, the locals are terrified of her. What’s more: Bill doesn’t remember being converted and doesn’t know she’s a Cyberman.

The little girl haltingly befriends Bill, eventually bringing her a mirror so she’ll be able to see what the others are seeing. Bill can’t make sense of her reflection, as her mind is preventing her from seeing herself changed. The Doctor walks in just as she’s melting down, confirms that she’s a Cyberman, and tells her that her time living under the monks helped strengthen her mind against the Cybermen’s programming. (Sigh.)

The Doctor and team identify where the lift doors are concealed on this floor, but Missy pushes the call button prematurely, letting the Cybermen know exactly where they are. Now they’ll have to scramble to evacuate at least the community’s children before the Cybermen arrive and decimate them all.

The Master and Missy can’t really be trusted, though. While the Doctor is working out how to help the people who have taken him in, the Master and Missy devise a plan to retrieve his TARDIS from the ship’s lowest floor. Although she doesn’t seem to remember anything about his time on the ship, because something about their being together and interfering with their time stream, she does remember having been scared by a woman in her past into always having exactly the spare part that the Master’s crippled TARDIS requires.

When it’s time to fight, the Doctor makes a Doctory speech to Missy and the Master about why he does what he does (not to win, but because it’s right) and pleads with them to stand with him. They both refuse, although Missy does so with visible reluctance and teary eyes, and head to the lift to leave.

The Cybermen come in two waves. The first wave is there for the children, and Nardole has unlocked the secret to fighting them– causing failures in the fuel lines below the floor that can be sparked into explosions when shot. This tactic is so effective that the Cybermen misperceive the community as a military stronghold and regroup to attack it as such. Their period of reassembly creates time for the children to be evacuated to another solar farm floor, and the Doctor sends Nardole to lead the evacuation, hinting strongly that he won’t be living long.

Nardole, the children, and the woman who cares for them (and wants to care for Nardole, if you get my drift), make their way to the new solar farm to start a new life, hoping to see the Doctor and Bill again despite the slim chances of that.

As Missy and the Master reach the lift doors, Missy makes her choice. She stabs the Master, leaving him enough time to get to his TARDIS and regenerate as her. She wants to stand with the Doctor. The Master isn’t having it, though, and shoots her with his weaponized sonic screwdriver, telling her not to bother trying to regenerate, because he gave her the full blast. (Really? Is that a thing?) They both laugh crazily at their situation, then he disappears in the lift and she goes all still and glassy-eyed.

The second wave of Cybermen find the Doctor and Cyber-Bill ready for them, blowing them up in twos and threes until the Doctor is so tightly surrounded that he has to escalate to the ultimate sacrifice, detonating an explosion that takes out the entire floor– himself and Bill included.

Except not quite. Cyber-Bill survives the blast and finds the Doctor prone on the ground. She weeps over his lifeless body, and the sky opens with rain in response. Then, from a nearby puddle, star-eyed Heather (Stephanie Hyam), from episode one of this season, “The Pilot,” emerges.

Suddenly, Bill is separate from her Cyber-body, and she and Heather are able to kiss. Heather still looks like a Japanese horror movie character, with water oozing out of her, but she’s very lively and super into Bill. She explains that when they last met, she left Bill her tears, and since then she’s been able to tell when Bill’s crying and tracks her by that. She is also able to magically reunite the Doctor with his TARDIS. Since Heather is a pilot, she knows how to fly the TARDIS, too.

In the TARDIS, Bill is adapting well to this latest change. She’s not really human, she’s become whatever Heather is, but Heather has the power to rearrange her atoms into anything, so she can be human again if she wants to. The girls are in love, and before Bill decides whether to stay with Heather and have adventures or go back to Earth, they give the universe a spin on their own.

The TARDIS has delivered him to the glacierscape from the beginning of the previous episode, and he practically falls out of her, sinking his hands in the snow to stop the regeneration. It seems to work, and he continues his rant about not wanting to change, when someone else comes into the scene– someone who identifies himself as the Doctor– the Original. It’s David Bradley channeling William Hartnell and giving us the first peek at what the Christmas Special will hold.

Notable: There is A LOT of banter between the Master and Missy about his regenerating as a woman. There is a moment when Bill says to the Doctor, just as they believe they’re about to die in battle, that she wants to make sure he knows she’s always been into girls. As the Doctor begins regenerating, a slew of his female companions (and Captain Jack) flash before his eyes. You guys: I think I might be right about it being time for a female Doctor, and I think these were the clues!

Also Notable: Unresolved by this episode’s end is when the Doctor would have been with Bill’s mom to be in the photo from episode one. I think he’ll somehow get that little girl from this episode to Earth, and she will become Bill’s mom.

And, to recap: Although we already know that John Simm’s Master will regenerate as Missy, we have no reason to believe she won’t regenerate somehow. Nardole is still on that ship, potentially getting familial with the woman who cares for the children. And Bill is a spacey shape-shifter with a serious girlfriend with whom she can travel through space and time. (Is this the new way to get rid of a companion? Halfway kill her, and then let her keep doing adventures in space and time with a girl? Because it’s uncannily like the way Clara departed…)