Ah, the end is near. In the penultimate episode of the regular season of Doctor Who, the stakes have risen to a dizzying height, the tension is horrific and even the most mundane moments have an implied weight because Peter Capaldi will be going soon.

To make certain his imminent departure is on our minds throughout all of the action in “World Enough and Time,” the episode opens with a bedraggled Doctor staggering out of the TARDIS onto a snowy, nighttime glacier-scape and beginning to regenerate while begging aloud for it not to happen. This isn’t a bait-and-switch like we experienced in the disappointing “Lie of the Land,” though.

The episode’s title, “World Enough and Time,” could reference one or more things. Although it’s most famously derived from the opening line of a poem by Andrew Marvell called “To His Coy Mistress,” which is essentially a man wooing a woman to surrender her virginity to him, it was more recently the title of the third episode in the box set of audio plays called The Diary of River Song, which was released last December.

The Marvell poem opens with “Had we but world enough and time This coyness, lady, were no crime,” and closes with “Thus, though we cannot make our sun Stand still, yet we will make him run.” Since the action in this episode is driven by the fact that time is standing still at one end of a 400-mile-long colony ship and moving quickly at the other end, perhaps there’s meaning in that last line.

The story of “World Enough and Time” unfolds in a non-linear fashion, jumping back from the Doctor regenerating to him having a conversation with Bill (Pearl Mackie) at the university about the prospect of contriving a mission to give Missy (Michelle Gomez) an opportunity to do good. The presentation of this conversation is choppy, suggesting that we’re bouncing back and forth a bit in time to follow the progression of the Doctor suggesting the idea and Bill agreeing to it.

Nardole (Matt Lucas) has the decision made for him by the Doctor, and Bill reluctantly agrees while eating chips she cooked herself with the Doctor in a university rooftop garden with the stars shining down on them. Although he’s attempted to explain his attachment to Missy, the only person he knows who is anything like him, Bill tells him that Missy really, really scares her. But the mission is on, so away they go.

The TARDIS lands on the bridge of a massive colony ship that appears to be heading into a black hole. The Doctor dispatches Missy and his companions onto the bridge to find out what is amiss and deal with it. It doesn’t take long for them to determine that the ship is backing away from the black hole and that although the bridge was designed for many operators, everything has been rearranged to allow one person to run things. So where are the others? 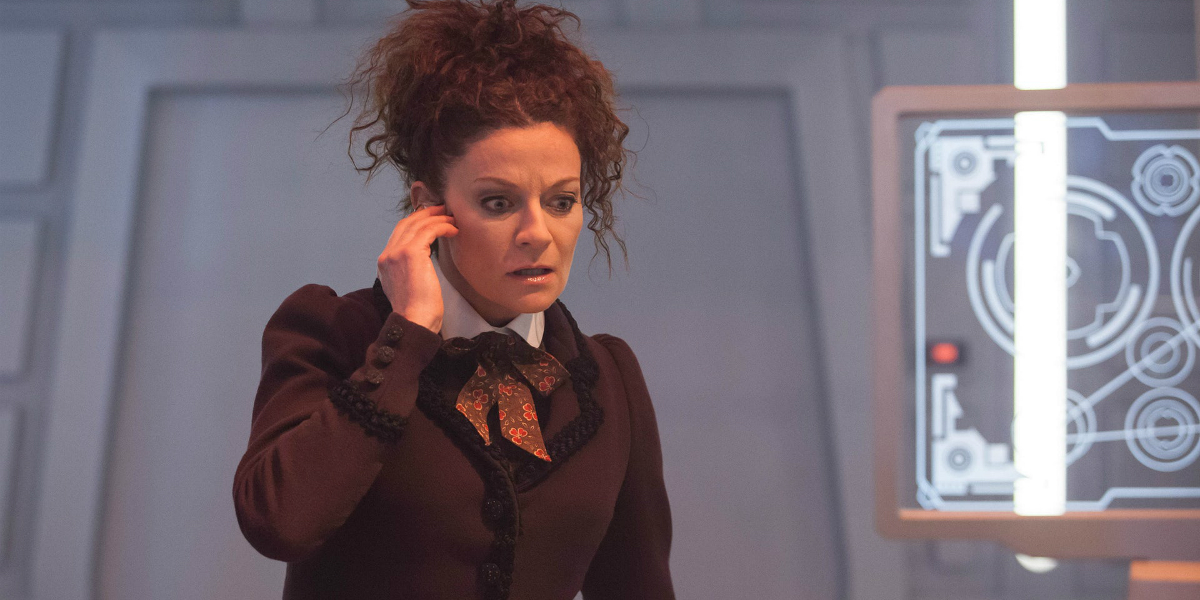 Before they can go looking for them, a blue man begins speaking to them from a screen and then comes onto the bridge, frantically working to identify the human in their group. High-velocity elevators are speeding towards the bridge, and the man, Jorj (Oliver Lansley), turns a gun on Bill when she identifies herself as the human. He says that the beings in the elevators would only be there for a human, and he needs to kill her so they won’t come. The Doctor steps between Jorj and Bill and begins one of his distractifying speeches, but Jorj is beyond being reasoned with and blasts a gaping hole through the spot in Bill’s chest where her heart ought to be.

She falls to the ground, apparently dead, as a group of people in hospital garb (whose heads are covered with stockings) emerge from the elevators and take her away to be “repaired.” As she is wheeled away, the Doctor implants in her subconscious the imperative to wait for him.

Some time later, Bill awakens in a hospital operating room. Her heart has been replaced by a mechanical something that protrudes from her chest. A strange man, sort of an Igor-type with a Russian-esque accent, discovers her waking up. He looks suspiciously like someone in disguise. (You begin thinking about the rumors that John Simm is supposed to appear this season as the Master, and this is the second-to-last opportunity for that to happen…)

When he leaves, she gets out of bed and goes exploring, taking along her rolling IV stand and the mysterious glowing liquid that’s feeding into her veins. She’s in some kind of hospital ward, and an electronic voice somewhere is loudly saying “PAIN…PAIN…PAIN…”

She goes in a door marked “out,” and finds a room bordered with people sitting in chairs and hooked up to IVs like hers. They’re wearing stockings over their heads, and the one at the end is pushing a button on a keypad and generating the cry of pain. While she examines him, a stout and stern nurse comes into the ward with the strange man, and Bill hides behind the draperies. The man sees her, and he encourages her to stay out of sight.

The nurse adjusts something on the pain person’s IV, then leaves the ward with her companion to do rounds. When they’re gone, Bill creeps over to see what the nurse did to the IV and finds a volume knob on it. When she turns the volume up, she can hear that the person is still issuing the pain alarm over and over, and because she can’t do anything else, she turns the volume back down. Her curiosity leads her to try the volume on another patient’s IV, and discovers that this person is begging to be killed. Frightened, she turns that volume down, too, and goes back to the window. She pulls open the draperies she’d been hiding behind and can see a smoggy city outside with smoke rising from a bleak urban landscape and a ceiling where the sky should be, boasting the number corresponding to the floor they’re on.

Just then, the strange man comes back for her. He takes her to his quarters and offers her some terrible tea. She accepts, and when she’s all the way inside, she can see that he has a live feed of the bridge on a small TV. She can see the Doctor, Missy and Nardole with Jorj, but they appear to be frozen. The strange man explains that they’re at the opposite end of the ship (400 miles away), where time moves slower. They aren’t frozen, but it can take weeks to see their movements progress.

We, the audience, jump back and forth between the bridge, where the Doctor is figuring out that Bill has been taken to the faster-moving end of the ship, that time is moving differently where they are than where she is because of the gravitational pull of the black hole, and that the ship is full of people descended from the crew that Jorj thinks left him only a day ago. Generations of people have been living and dying at the far end of the ship as Jorj has lived through only two stressful days. The Doctor understands that years might be passing for Bill while they’re working things out, and he incapacitates Jorj so he and Missy and Nardole can get on the elevator and go searching for their friend.

Indeed, years are passing for Bill. Although she is occasionally haunted by the embedded message from the Doctor to wait for him, and although she watches him and the others moving almost imperceptibly on the strange man’s TV, she settles into a life in the hospital. The nurse has convinced her that her mechanical heart won’t work beyond its walls, and most of the exits are locked, so Bill chips in as a custodian and lives companionably with the strange man. 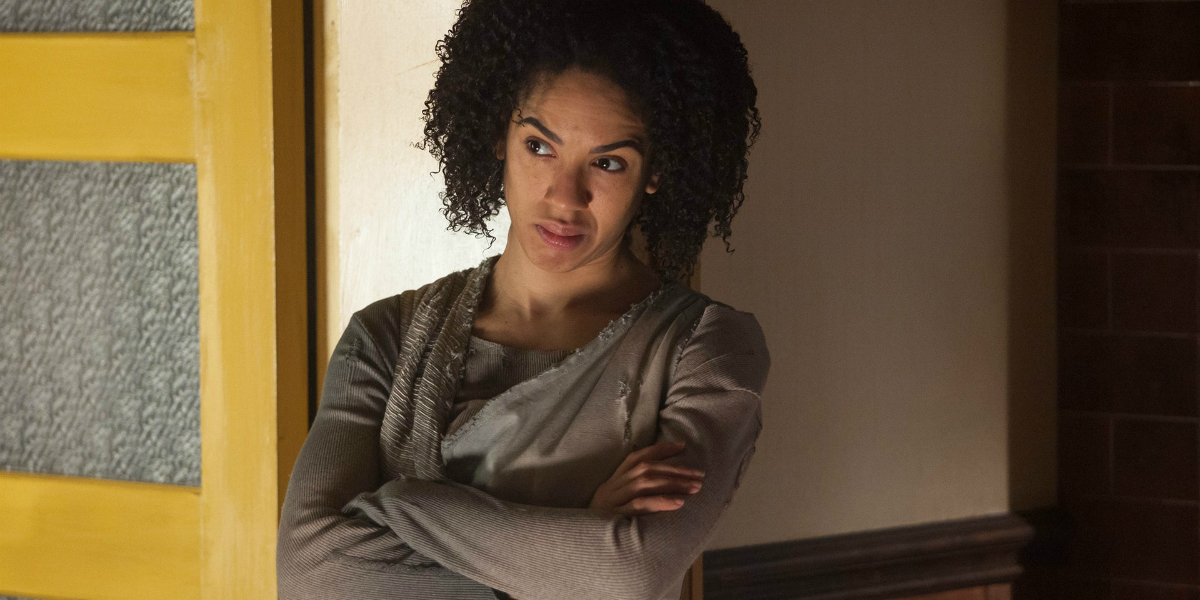 One day, after who knows how much time has passed, Bill notices on the TV that her friends are at the elevator doors– they’re coming for her at last.

By this time, we’ve been given a number of clues about what’s happening in the hospital. The strange man has told Bill that the atmosphere on their floor of the ship is killing the people, and that the hospital is “converting” the strongest among them so they can survive an attempt at an exodus to another floor. He has explained to her that this “upgrade” will cure them and keep them alive. We have heard the mechanical voices. We have seen pieces of the familiar guise. And before the Doctor can get to her, the strange man has tricked Bill into an operating theater where a surgeon is ready to turn her into a proto-Cyberman.

Because of the disparity in time, we don’t know how long Bill is in this state before her rescuers arrive. The Doctor leaves Missy at a computer station they find outside the elevator and takes Nardole along with him into the clean and empty operating theater.

While Missy is alone, the strange man approaches her and begins a verbal dance with her about how she’s been there before, that she knows where she is, and that he wouldn’t kill her because of his sense of self-preservation. She has just begun to figure out that the people on this ship didn’t come from Earth, but from a planet she’s familiar with… and that she has been here before… and that she did something terrible here… when the strange man unmasks himself as the Master.

Simultaneously, the Doctor and Nardole begin piecing together that they’re in the presence of Cybermen. The Doctor is desperate to find Bill now, and of course this is when Cyberman Bill enters. The Doctor pleads with the proto-Cyberman to help him find Bill Potts, and eventually she is able to tell him that she is Bill Potts. She laboriously tells him in an electronic voice that she waited for him, and the two Masters come in to reveal to the Doctor that he’s in the midst of the genesis of the Cybermen, executed in part by the Master at his most evil.

Cyberman Bill releases a single teardrop, which seeps from her eyehole in the spot consistent with where modern Cybermen have a metal one.

AND OUR HEARTS BREAK.