The 10th episode of the 10th season of Doctor Who feels like a return to form after a couple of underwhelming weeks, but registering that that episode number means that there are only two more installments in the Peter Capaldi era is gutting.

In “The Eaters of Light,” the Doctor (Peter Capaldi) and Bill (Pearl Mackie) drag Nardole (Matt Lucas) off to ancient Scotland to settle a dispute about what became of the Roman Ninth Legion, which mysteriously disappeared early in the AD era. Nardole is concerned about leaving the vault unattended again, but the Doctor and Bill are hell-bent on proving to each other that their respective theories about what happened to the ninth are correct, so they exit the TARDIS and split up to look for answers.

Almost immediately, Bill falls into a Pictish trapping pit, where she finds a Roman soldier from the ninth who has also fallen into the trap. We can see that she’s being stalked by something before she falls, and when she lands, the soldier explains that except him and a handful of other deserters, his 5000 fellow soldiers were wiped out by some kind of monster.

Meanwhile, the Doctor and Nardole encounter what looks like a deflated human corpse just ahead of the remains of the ninth– all of whom have been similarly killed. The doctor recognizes the signs of sunlight depravation as the cause of death, but he knows that naturally it would take decades of this to have the effect he’s seeing in the deceased soldier. He is sure there’s something alien afoot. Before they can hunt up Bill, though, a band of Picts surrounds them and takes them captive. 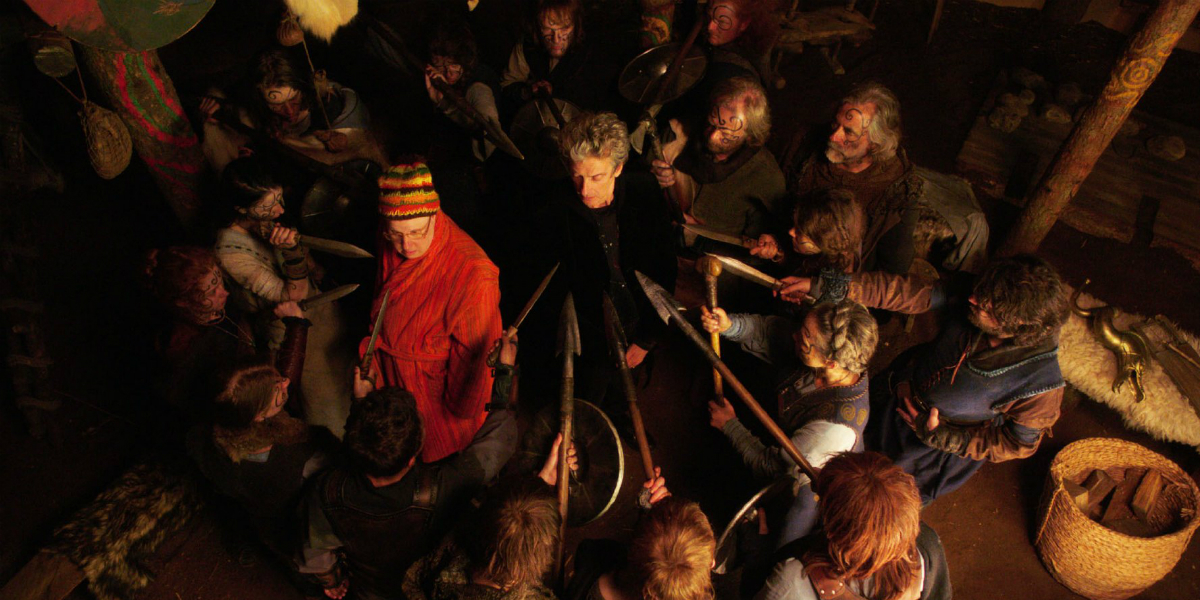 Bill and her soldier friend help each other out of the pit and begin making their way to a hideout where his friends are waiting. As soon as they’re moving through the woods, the monster emerges and captures the soldier in what look like glowing, electric tentacles. It covers him with black slime and leaves him deflated, and Bill takes advantage of the gruesome distraction to get away and find the hideout.

The monster is hot on her heels, and as she bursts into a fire-lit cave full of Roman soldiers, the tentacles follow and grab her. The soldiers pull her free and block the entrance, and she tells them that their friend was killed by the creature. As the soldiers try to determine what to do with her, she touches the place on her neck that the creature made contact with, comes away with a handful of black slime and passes out cold.

Now that the soldiers have an unconscious Bill to care for and the Doctor and Nardole are in the Picts’ headquarters, surrounded by their captors, all of the players are assembled. The bulk of the episode follows a healing Bill as she befriends the Romans (and gets a small taste of their progressive-by-today’s-standards approach to sexuality) and plots to find the Doctor and overthrow the beast, and the Doctor as he investigates what’s really happening.

What the Doctor determines is that the Picts have been unwittingly guarding a portal to another dimension at the top of an ancient cairn. When the Romans invaded, Kar (Rebecca Benson), the current gatekeeper for her tribe, let a creature escape from the mysterious gate her people protect, hoping that it would kill the Romans and vice-versa. Her plan backfired, and she’s accidentally released an alien creature that is eating all of the sunlight on Earth, draining it from humans and more.

The Doctor devises a plan to lure the creature back into the portal to its own dimension, which begins to take shape as a recovered Bill successfully leads the Romans through underground caves and into the Picts’ place. Together, the Picts, the few surviving members of the ninth and the Doctor and his companions attract the creature with loud music and then force it back through the gate.

The Doctor, seemingly sincerely, tells the relieved humans that he’ll also enter the portal to make sure the creature (and its millions of fellows) never gets through again. Bill and Nardole find this outrageous, and Kar and the soldiers refuse to let him make this sacrifice. They knock him over the head and disappear into the other dimension together. (Their music can be heard on the hilltop to this day.)

Afterwards, Bill and Nardole chastise the Doctor for thinking he could devote eternity to guarding just one gate to danger for Earth when there are so many more threats to be mindful of. He acknowledges that they’re right, and everyone heads back to the TARDIS, where Missy (Michelle Gomez) is waiting for them.

Her presence is no surprise to the Doctor, who has programmed the TARDIS to keep her locked inside in exchange for her performing maintenance on it. Nardole and Bill are highly suspicious, though, and vocally question the Doctor’s judgement.

Later, the Doctor and Missy are alone together and he helps her truly hear the music that the people he’s just saved are still playing within the inter-dimensional portal. It brings a tear to her eye, and when she asks him why he thinks she cries so easily these days, he suggests that it could either be means of manipulating him or evidence that it’s time for them to be friends again because she is actually changing. They clasp hands in a moment fraught with what feels like romantic tension, and then he breaks away. What the what?

Notable: Bill notices the telepathic translator for the first time in this episode, gleefully figuring out that it explains why everyone in the universe speaks English.