DOCTOR WHO Recap: (S10E07) The Pyramid at the End of the World

It’s the end of the world as we know it– maybe– in the latest episode of Doctor Who, “The Pyramid at the End of the World.”

Bill (Pearl Mackie) is on the real-life version of the date with Penny (Ronke Adekoluejo) that we saw in what turned out to be a simulation last time, trying to explain the Doctor (Peter Capaldi) and what inspired her to ask Penny out. They make it back to Bill’s flat for tea, and Penny has just learned that in the simulated version of the date this is when the Pope burst in, when the Secretary General of the United Nations (Togo Igawa) intrudes on them with his armed guards. Penny opts to take an Uber home, and Bill helps the Secretary General collect the Doctor.

With Nardole’s (Matt Lucas) assistance, Bill and the Secretary General are able to extract the TARDIS, with the Doctor double-locked inside, and load it into a jet to travel to a remote place in the world where Russian, Chinese and American troops are in a tense stalemate with each other as they surround a 5000-year-old pyramid that has appeared overnight. Once his companions have coaxed the Doctor out of the TARDIS, his status as President of Earth is activated, and he is taken to the edge of the perimeter the Earth forces have established around the pyramid. 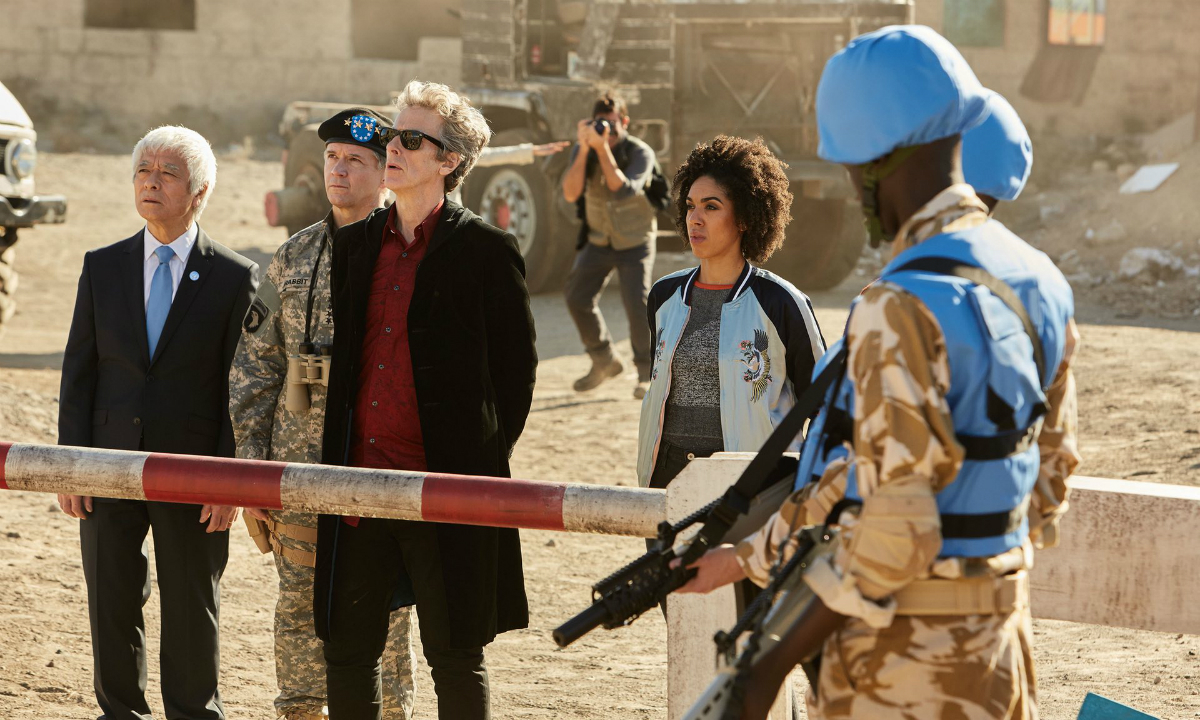 The Doctor uses his sonic sunglasses to evaluate the structure, and he quizzes Bill about what it has to be based on what they know about it. She correctly assesses that it must be alien in origin, and the Doctor heads towards it alone to investigate.

As he approaches, a door opens in the exterior of the pyramid, and one of the corpse-like monks he met in the simulation emerges. The monk says that the world is about to end, and that they can help– if they are asked to do so. The Doctor is confident that this will not happen, but when the monk retreats into the pyramid, everyone on Earth’s clocks auto-set to three minutes to midnight, reflecting a new setting for the Doomsday Clock.

The Doctor and the Secretary General hop in the TARDIS and collect the leaders of the armed forces surrounding the pyramid. With the Doctor’s unexpected encouragement, they agree to unite in a show of strength against it. This plan fails, and the monks neutralize the bomber deployed by the Americans and the nuclear sub the Russians attempted to fire a missile from.

Together, the Doctor, Bill, Nardole and the leaders of each of the groups represented, go into the pyramid to talk to the monks. The monks are able to give them a preview of the dead planet they’ll have a year in their future and tell them that if they ask for help– specifically if power consents to their help with love– they will help them… forever. Despite the Doctor pleading with him not to, the Secretary General says that he has power and does consent, but the monks determine that his motivation is fear, rather than love, and he disintegrates. 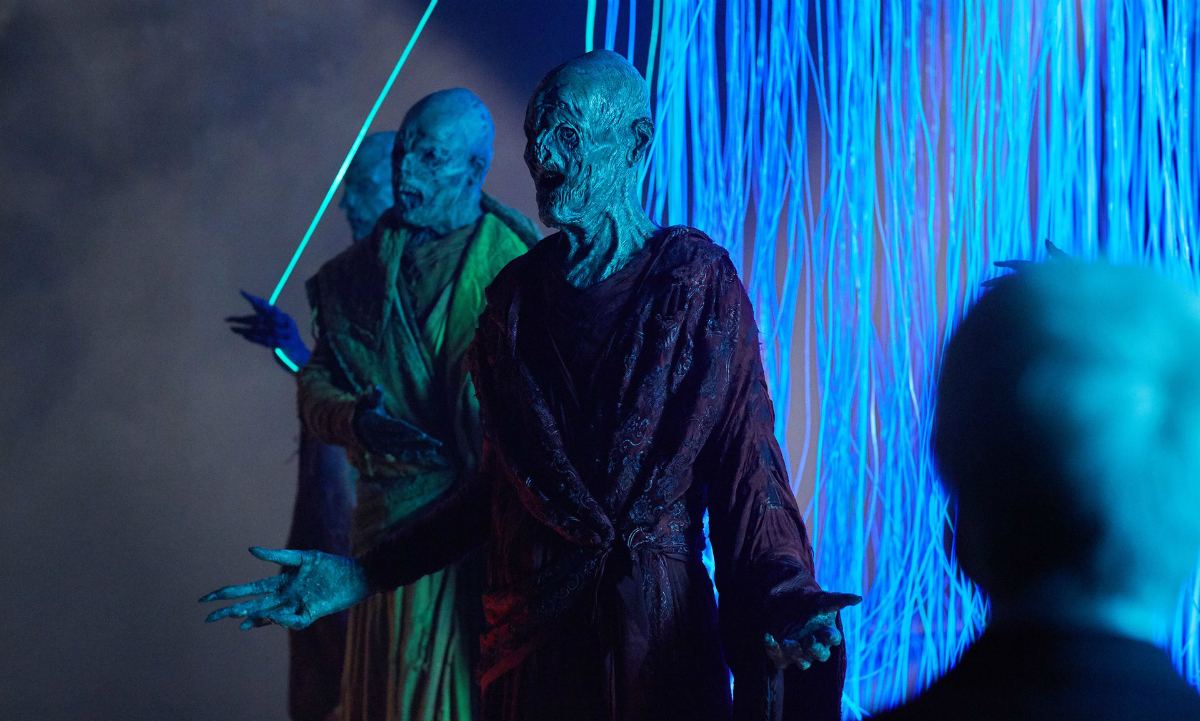 The Doctor proclaims to the monks that nobody else will surrender to them, and that he will save the Earth as usual, and he, his companions and the remaining leaders leave the pyramid. They go to a mobile conference room near the perimeter and agree that there will be no war, regardless of what any of their country’s leaders or superior officers might request, but their declaration of peace doesn’t stop the Doomsday Clock from creeping forward.

Eliminating war as the major imminent threat to humanity, the Doctor challenges everyone in the room to figure out what the monks are trying to distract them from by bringing them into this apparent military standoff. Nardole quickly suggests that bacteria is something that could cause the devastation they saw in the monks’ projection, and the Doctor uses his sonic tools to place every classified document that might help them find a high-risk bacteria on the internet and sets the group to Googling.

Despite swelling music that confirms for us that the Doctor is in his heroic moment, the military leaders don’t trust him and become impatient. They decide to surrender, and the Doctor sends Bill with them while he and Nardole return to the TARDIS.

By this time, the Doctor has deduced that something biochemical must be going seriously wrong in the world at that moment. He also deduces that the most likely way the monks are able to monitor it is by tapping into CCTV cameras in a lab. He has Nardole disable the CCTV cameras in every biochemical lab on UNIT’s watch list, and then they look to see which single lab’s cameras are immediately re-enabled, thus zeroing in on the lab where an accident is spinning out of control.

Interspersed throughout the episode have been glimpses of the chain of events leading to this accident. A woman’s reading glasses break on her way to work in the biochemical lab, so she asks her hungover lab partner to do the mixing on the bacterial experiment they’re running. In his bleary-eyed state, he misplaces a decimal point, resulting in a super-bacteria that spreads through the air and turns organic matter, including said hungover scientist, into goo.

Erica (Rachel Denning), the scientist with the broken reading glasses, locks down the lab and is desperately trying to stop the bacteria from escaping when the TARDIS lands beside her. The Doctor and Nardole step out, into her contaminated lab, and the Doctor tells Nardole to return to the TARDIS because he’s too human to survive the bacteria. Then he and Erica get to work. 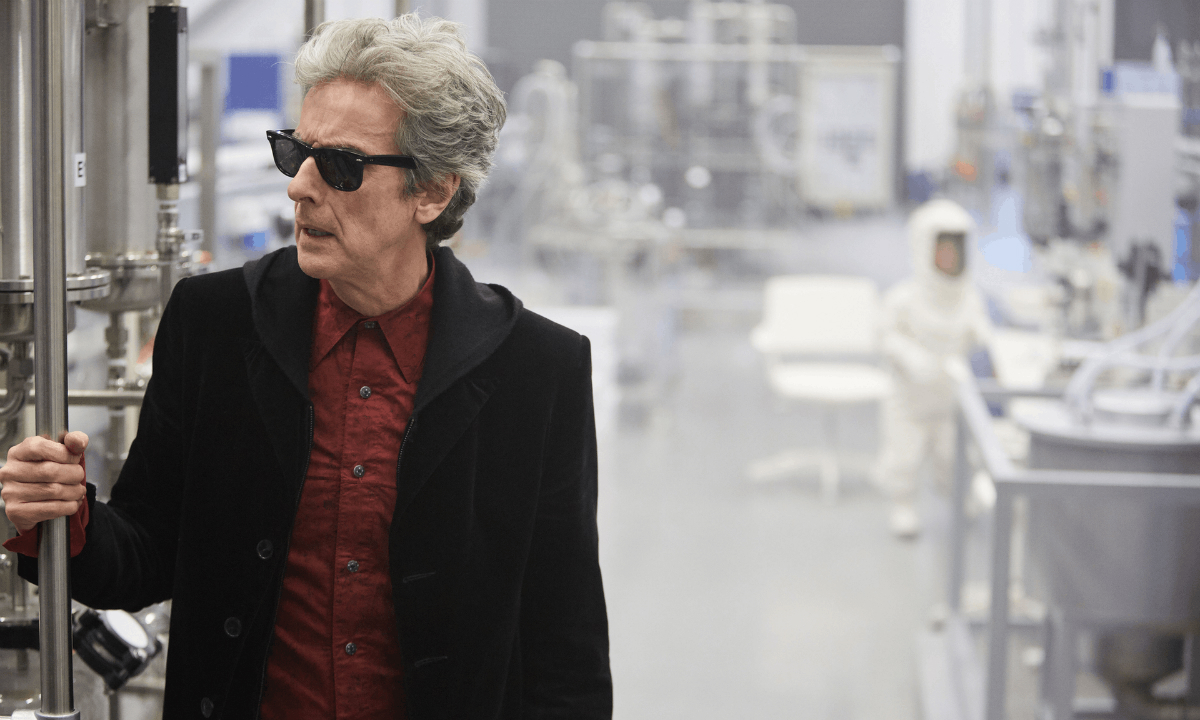 The lab has a ventilation system that will automatically release the bacteria into the atmosphere in 20 minutes, and the Doctor devises a bomb to blow up the lab, thereby killing all of the bacteria. As soon as his plan is in motion, the Doomsday Clock starts to move backwards.

Unfortunately, the other leaders have failed in their attempt to surrender and been disintegrated by then, leaving Bill alone in the pyramid with the monks. Also, unbeknownst to anyone, Nardole is either dead or unconscious in the TARDIS as a result of his brief exposure to the bacteria.

As the Doomsday Clock backs away from “end of the world,” and Bill begins to make her way to the pyramid’s door, no longer planning to surrender, the Doctor finds himself accidentally locked into the lab with the bomb. Connected to both Bill and Erica by a communicator of some kind, he has to confess to both that he is blind. He can’t see the numbers on the combination lock he will have to manually activate to escape the blast. He has saved the world, but it looks like he will not have saved himself.

Bill finds this unacceptable, and against the Doctor’s wishes, she returns to the monks. They assure her that if she surrenders, the Doctor’s sight will be restored. She surrenders, and her love for the Doctor gets the deal done. The Doctor’s sight is restored, he makes it out of the lab ahead of the bomb blast, and although both he and the Earth are safe for now, he wonders aloud what Bill’s choice will mean.