When we last saw the Doctor (Peter Capaldi), he was confessing to Nardole (Matt Lucas) that he’s completely blind. If you were hoping that would have somehow been resolved before tonight, you’re in for a disappointment. He’s just as blind when “Extremis,” the sixth episode of this season of Doctor Who, opens and, spoiler, when it closes. (With a brief break in the middle…)

This engrossing, taut episode jumps back and forth between two stories. In the forefront is a thriller of an adventure that takes our heroes to the Vatican, the Pentagon and beyond. And interspersed throughout the story is a moment from the not-too-distant past in which the Doctor has been called upon to execute Missy (Michelle Gomez). 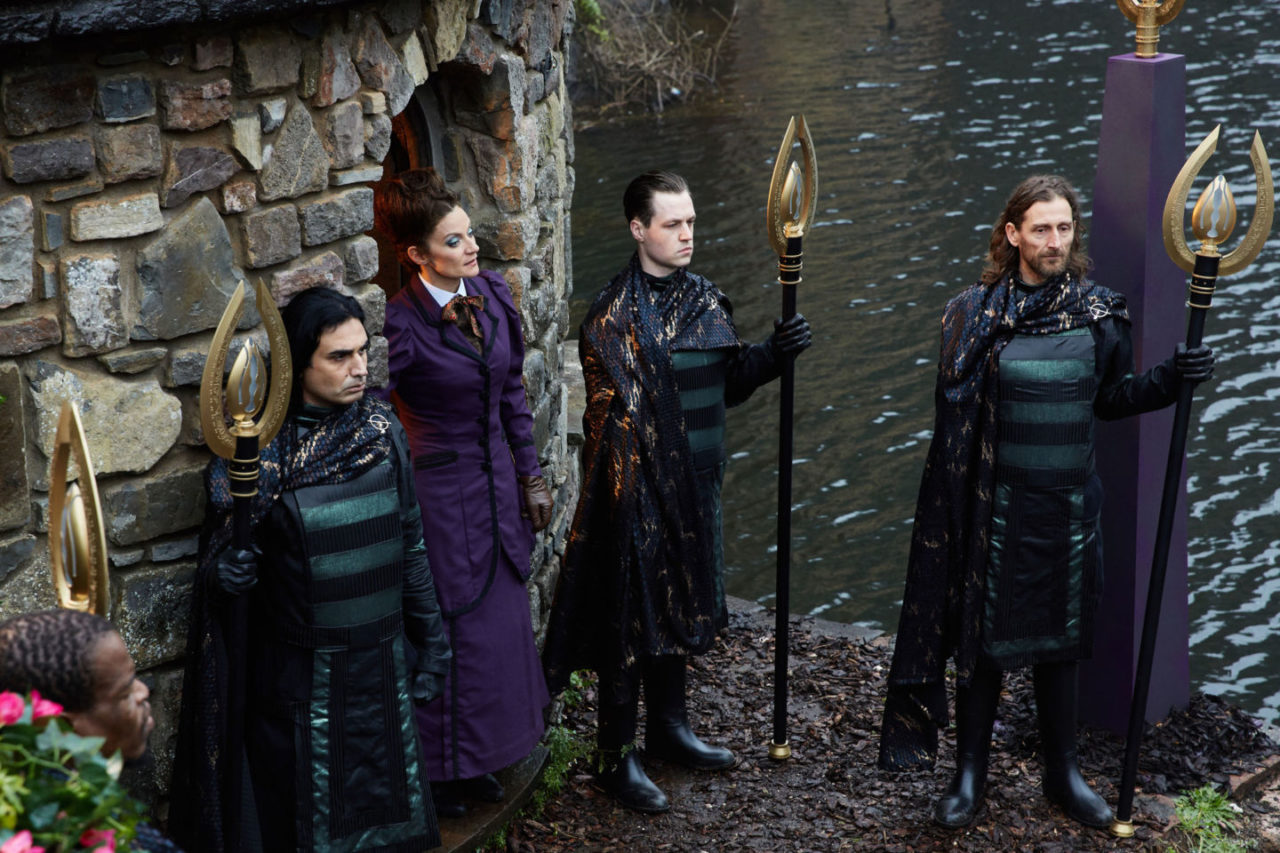 Forefront: While the Doctor is brooding in his dark lecture hall over being blind, he is interrupted by the arrival of Cardinal Angelo (Corrado Invernizzi), a small army of priests and The Pope. They beg him for his help, explaining that after years of effort, a team of Vatican employees has successfully translated an ancient document titled VERITAS, and that since doing so, every single one of them has committed suicide. (Except maybe one guy, who is missing.)

They explain that the document is written in a dead language and that every known translation has been destroyed and the translators have all died by their own hands. They beg the Doctor to read the document and unlock the secret that compels devout Catholics to choose hell, by committing the mortal sin of suicide, after reading the Veritas.

The Doctor, of course, agrees. He loads them all in the TARDIS, makes a quick stop in Bill’s (Pearl Mackie) bedroom (back at her foster mother’s flat after the debacle with the house and housemates), inadvertently drives away Bill’s date by dropping The Pope and a bunch of priests into the poor girl’s moment of doubt about dating a girl, and then continues to the Vatican with the lot.

At the Vatican, Cardinal Angelo takes the Doctor, Bill and Nardole into a secret library full of heretic books, where the Veritas is kept in a locked cage. Just as they’re approaching it, though, they discover an apparent portal that has opened in a wall. Cardinal Angelo stops to investigate, while the Doctor and his companions continue to the cage.

The cage isn’t empty, though! The missing translator is inside, where he has just finished emailing the translation to the physicists at CERN. He confesses that he “sent it,” then disappears into the library with a pistol. As the Doctor and friends access the cage and figure out what the poor priest meant, they hear a gunshot from his direction. (Meanwhile, Cardinal Angelo has disappeared.) 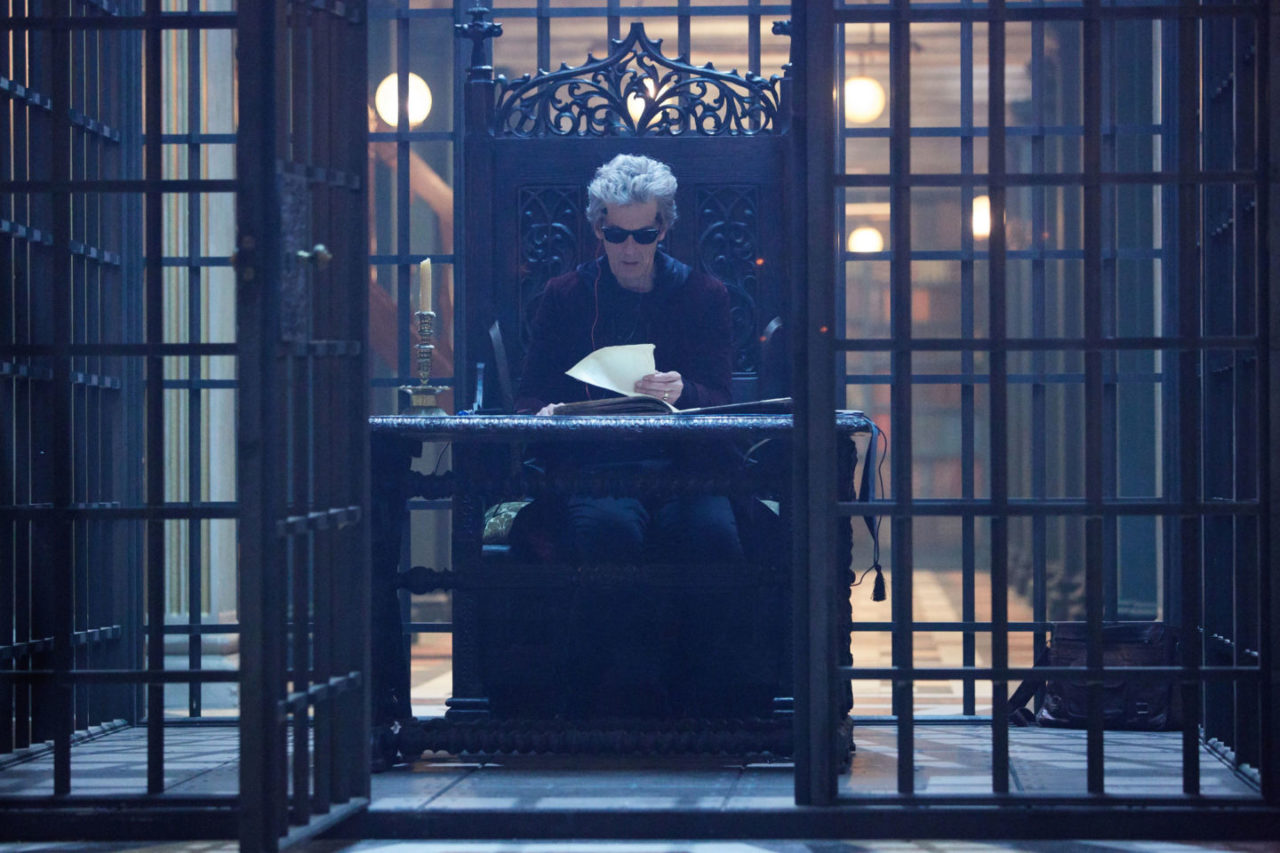 The Doctor sends Bill, from whom he is still concealing his blindness, and Nardole off to investigate the gunshot while he stays behind to read the Veritas.

As soon as he’s alone, the Doctor rigs a device to his temples and takes off the sonic sunglasses that have been helping him navigate the library. When a figure he mistakes for Cardinal Angelo enters the cage, he explains that the device will either restore his eyesight temporarily and allow him to read the Veritas, or it will fry his brain.

He gives it a try, and his eyesight is imperfectly restored. He asks the stranger in the cage to help secure him to the reading station with the seatbelt and hand straps there, apparently to prevent a reader from committing suicide. The stranger complies, and as soon as the Doctor is firmly strapped in, his vision clears enough to reveal that it isn’t Cardinal Angelo in the cage with him, it’s a freaky alien with a decayed-looking face and monk-like robes– and he’s brought friends. 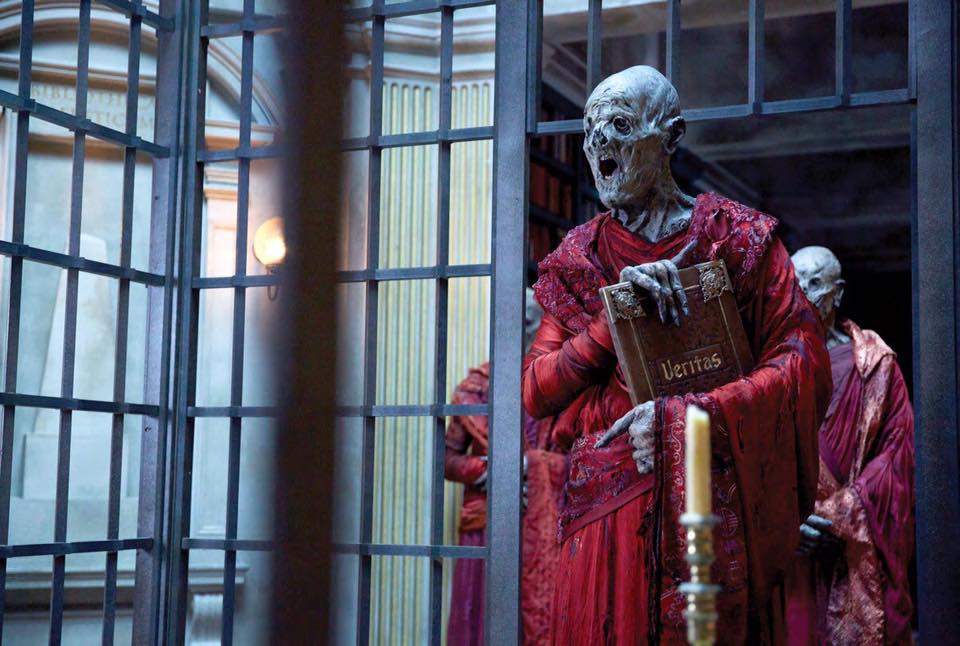 The aliens take the Veritas, but the Doctor has a backup. He uses his screwdriver to shut off the lights, grabs the laptop with the translation on it and bolts into the library.

Elsewhere, Nardole and Bill find the translator and confirm that he’s shot himself… and then they find another portal. They decide to investigate and discover that it is a door that leads to a white, circular room full of pillars opposite more doors. They pop out through another one and find themselves emerging from a utility closet in the Pentagon. They quickly turn back to the rotunda and try another door, where they are swept off towards a cafeteria by a lab-coated scientist at CERN.

The cafeteria is full of lab-coated people who are drinking at tables while an ominous clock counts down above them. They’ve read the Veritas translation, rigged the whole cafeteria with dynamite and are ready to blow themselves up. When Bill and Nardole figure this out, they try to intervene, but instead the scientist who led them in has them start guessing numbers at random. He asks them to call out whatever number they’re thinking of, and they shout the same number in unison over and over, with such predictability that the whole room is able to join in.

Feeling increasingly frightened of the oddity of this pattern and the impending explosion, Bill and Nardole retreat to the rotunda.

Inside, Nardole starts puzzling out what’s going on. It doesn’t take him long to determine that the pillars in the center of the rotunda are projectors, and that the “doors” are actually projected realities. His mind starts to spin as he tries to pinpoint the moment at which they entered the projection, and when he realizes that he might always have been part of it, he’s distraught. He challenges his hypothesis by reaching beyond the circle of projectors, and as soon as he’s out of the projection, he disappears into a cloud of pixels.

Terrified, Bill follows a blood trail she’s spotted on the floor, and emerges into the Oval Office, where the President is dead in a chair and the Doctor is sitting at his desk with the laptop. He explains that he’s just listened to a text-to-voice translation of the Veritas, and that what it reveals is that they’re shadows in a shadow reality. A potential invader of the Earth has rigged a simulation in order to perfect their plan of attack, and the suicides are actually just people who have figured out the game and opted out of being used by it. Bill begins to freak out at this; then she, too, disappears into a cloud of pixels.

As she does, one of the robed figure enters and confirms the Doctor’s assessment. The alien is confident that the shadow Doctor can’t do anything about the knowledge he’s acquired, but the Doctor always has a way to save the day. His sonic specs have been recording the whole thing, and even though he’s a computer simulation, he can still send an email. He emails the recording to the real Doctor as a warning with the subject line EXTREMIS. 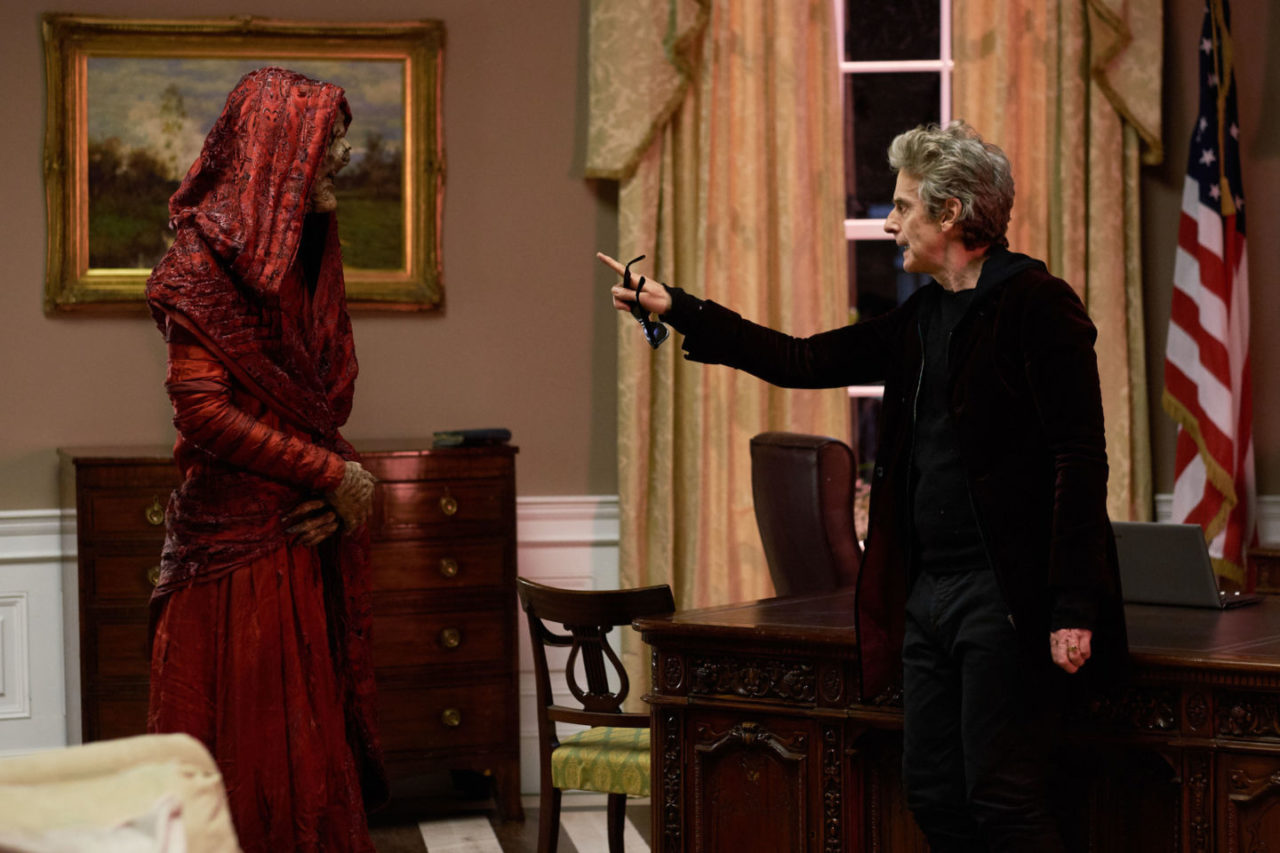 The real Doctor receives the email and watches the recording on his real sonic specs as he sits in the university basement, guarding the vault, where INDEED! Missy, the Master, is imprisoned. (#calledit)

In flashbacks, we’ve seen the Doctor, shortly after his last, long night with River Song, apparently about to execute Missy at the behest of a species of executioners. Their execution method for a Timelord will kill her and render her incapable of regeneration, and then the Doctor will have the responsibility of guarding her body for a thousand years.

Before she dies, Missy pleads with the Doctor for her life, declaring more than once that whatever else, she was his friend. Putting a temporary pause on the execution, Nardole arrives, dressed as a priest, and reads the Doctor a passage from River Song’s diary. He tells the Doctor that he’s been authorized by River Song to kick his a**, and that River would not approve of this. Nevertheless, the Doctor returns to the execution setup and pulls a lever that shoots electricity (or something that looks like it) into Missy, leaving her inert on the floor.

The Doctor makes a vow to guard her body for 1000 years, just as she stirs on the ground. The governors of the execution are incensed, but the Doctor encourages them to look at how many deaths he’s been personally credited with before messing with him, and when they do, they run.

Back in the present, now that he knows the Earth is in danger while his eyesight is gone, he whispers to the vault that if Missy really is his friend, he’s going to need her. He also calls Bill to say that she should step up and ask out the girl he saw in the shadow world, because something bad is coming and they’ll be very busy soon.

Noteworthy: While explaining to the being in the cage that he still believes is the Cardinal what the device will do to him, the Doctor says he’s borrowing from a future self in order to see for a few moments. He doesn’t know if the consequence will be that his future regenerations will all be blind, he’ll never regenerate again or something else.

In other news, wouldn’t this be nice? 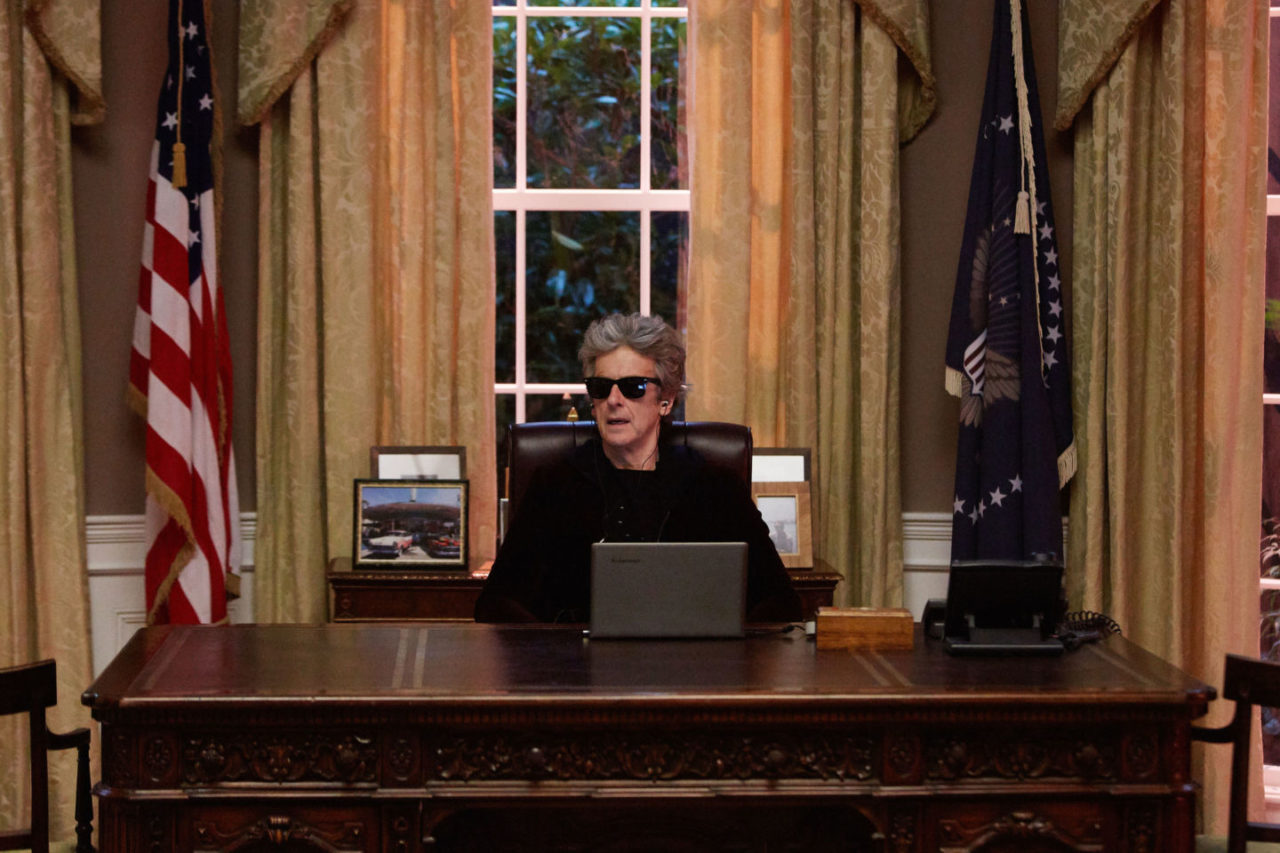