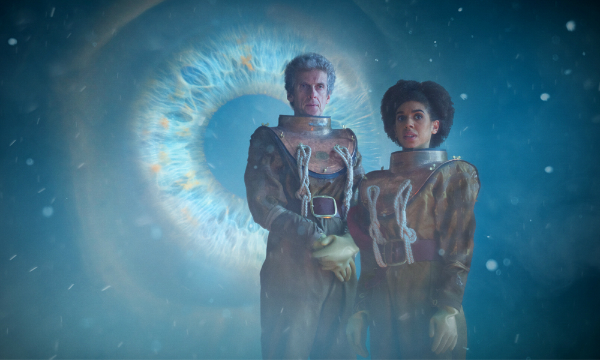 When we last saw the Doctor (Peter Capaldi) and Bill (Pearl Mackie), they were stepping out of the TARDIS expecting to emerge into the Doctor’s university office and instead stepping onto a frozen Thames and into the path of an apparently charging elephant. The latest episode of Doctor Who, Thin Ice, picks up in that same moment, giving it immediate context.

The TARDIS has redirected its occupants from 2017 London to 1814 London, dropping them into a “Frost Fair” staged on the frozen river Thames. Street urchins, led by a savvy black girl named Kitty (Asiatu Koroma), are distributing fliers to those who pass, encouraging them to come down and experience the delights on the ice: acrobats, musicians, food vendors, the elephant and more. The Doctor encourages Bill to change into an appropriate dress for the era, and the two accept a cherubic urchin’s invitation to join the festivities. 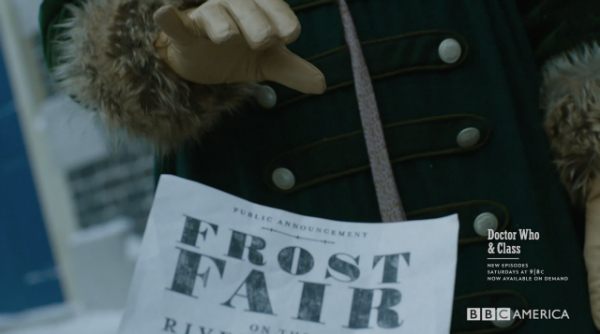 It doesn’t take long for the weirdness to begin. Shortly after stepping onto the ice, Bill begins to see green lights moving beneath it. The Doctor sees them, too, and they’ve just begin to discuss what they might be when Kitty and her cohort, Spider (Austin Taylor), tag team them in an effort at pick-pocketing. The Doctor catches on before their ruse works, but it doesn’t stop Spider from dashing up, grabbing the Doctor’s screwdriver and running off onto the dangerous thin ice.

When the Doctor and Bill finally catch up with him, he’s become transfixed by the green lights moving beneath him and has fallen behind Kitty in their escape. Before the Doctor, Bill and Kitty’s eyes, the green lights begin circling madly, the ice opens and poor Spider disappears beneath, leaving behind his hand clasped around the sonic screwdriver for a moment allowing the Doctor to reclaim his tool before the rest of the boy disappears. 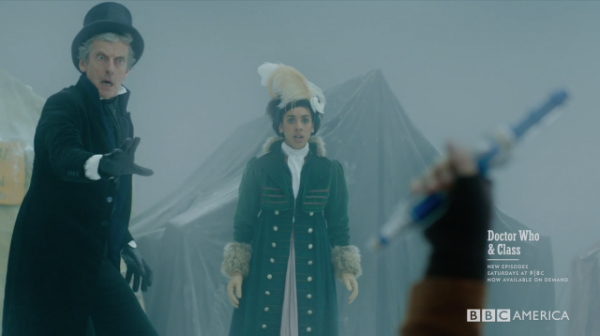 Bill is overwrought at having witnessed the Spider’s death and confronts the Doctor about his apparent nonchalance. He explains that he’s moved on, and that they need to find the other urchins before one of them winds up on the menu. Bill asks during their confrontation if he’s ever killed anyone, and although he beats about the bush for a moment, eventually he says yes. Their exchange is interrupted by Kitty, though, who has been eavesdropping.

The Doctor and Bill convince Kitty to take them to where the urchins live so they can help save them from Spider’s fate. Once inside their rough shelter, they feed the children pies and treats and win their confidence. The Doctor discovers that the children are being paid by someone to distribute the Frost Fair fliers, and he immediately makes the leap that the Fair is a lure for people to come onto the ice to be eaten by something. The children give him a description of the man who pays them, but he decides that it will be easier to get eaten than to find the man, so he and Bill head to the ice at night in diving gear and start drawing attention to themselves.

It doesn’t take long before the lights begin circling Bill, opening a hole in the ice into which she falls and the Doctor leaps. At the bottom of the Thames, the duo discover a massive whale-like creature that is obviously working in harmony with the lighted fish that procure humans for it to eat. The whale creature is chained to the bottom of the river, and it makes a sound that Bill identifies as despair.

After meeting the creature, the two emerge from an ice fishing hole cut by a pieman whose trademark move is some prestidigitation with a trick coin. They glean from him that the man paying the children is likely affiliated with the people who have been working in secret at a factory on the riverbank since the freeze set in.

The next day, our heroes go to the factory and Bill gets her first glimpse at psychic paper when it helps get them inside. They appear to be at some kind of brickworks, but the security suggests that something more is afoot. When the foreman is satisfied that the Doctor and his companion are important people in the employ of his boss, an upper-class nancy-boy named Lord Sutcliffe (Nicholas Burns), he lets them in on what he’s deduced about the substance they dredge from the river’s bottom (near the creature’s rear end) and fashion into bricks for the steel mill: it burns hotter than coal, longer than coal and can even burn under water.

This information necessitates a visit to Lord Sutcliffe, whom the Doctor needs to see to assess whether or not he is human. When the very human Lord greets the Doctor, he catches sight of Bill sitting behind him, assumes she is a servant (or slave), and begins chastising her for sitting in the presence of her betters. The Doctor hauls off and slugs him, and not long after the Doctor and Bill are bound and ready to be dealt with by the Lord’s henchmen.

Before being dispatched, the Doctor gets the nancy-boy to explain that the creature has been secretly chained to the river bottom for as long as his family’s records go back, her presence and function passed from generation to generation. The Doctor points out that although generations of Lord Sutcliffe’s family have been exploiting the creature, the current Lord is the one who has created the Frost Fair to increase the number of people who will “go missing” on the ice as the creature feeds, which must be leading to an increase in fuel production.

The henchmen tie Bill and the Doctor to a post inside a tent full of creature-fuel that has been wired as a bomb. Lord Sutcliffe plans to send the whole Fair into the Thames at once, profoundly increasing the creature’s dung production. They work together to free the sonic screwdriver, and the Doctor quickly realizes that it’s attracting the lighted fish– that sound  is what attracts them. The main henchman walks in on them just before the circling fish open a hole in the ice, and he winds up feeding the beast.

Bill and the Doctor split up, and as Bill and Kitty team with the urchins to clear the ice of people, the Doctor removes the dung bombs to the river’s bottom, securing them to the creature’s chains. By the time Lord Sutcliffe presses the plunger on his detonator, the ice is clear of almost everyone, and his bombs explode quietly.

Lord Sutcliffe runs down to see what is amiss, and the creature emerges through the ice to eat him as she leaves town.

Bill and the Doctor tie off the loose ends by forging documents to identify the only remaining male urchin as Lord Sutcliffe’s heir, an unfortunate legal necessity of the time that forces them to bypass Kitty in favor of “Perry,” then make it back to the Doctor’s office in 2017 in time to meet Nardole (Matt Lucas) for tea.

Nardole isn’t happy to see that the Doctor has apparently broken the mysterious vow he took not to go off-world. He serves their tea, then returns to the vault, where something is knocking loudly to come out!

Notable in this episode: Bill comments more than once on racial issues, including when she emerges into slavery-friendly Regency era England with black skin, on discovering the era to be more black than she’d expected (to which the Doctor responds that Jesus was, too, and that history is a whitewash) and when Lord Sutcliffe addresses her as a “creature.”

Also notable: the Doctor makes Bill decide whether they save the creature or not, then lets her lead the charge in saving the street urchins. When they get home, he tells her that she was the one who made all the decisions regarding her planet and her people and calls her “boss.”