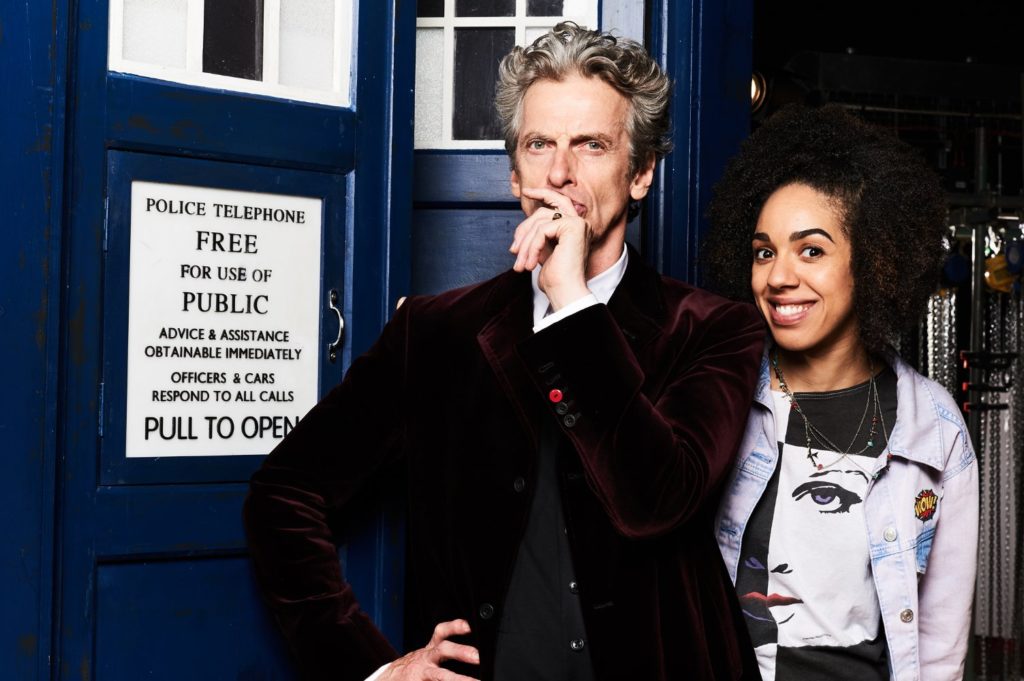 Oh, thank goodness. The Doctor is BACK!

In episode one of Doctor Who‘s 10th season, The Pilot, all the buzz about The Doctor’s new companion pays off in a beautifully executed, emotionally taut kick-off for Peter Capaldi‘s final run. (sob)

The Doctor is a lecturer at a university. Nardole (Matt Lucas) and he spend their free time tinkering with a mysterious vault covered with Time Lord symbols in the basement of the building in which The Doctor has an office. (An office with framed photos of River Song and Susan Foreman on the desk and a big, blue box in the corner.) And Bill (Pearl Mackie) serves chips in the canteen and has been sneaking into The Doctor’s lectures.

The Doctor has Nardole summon Bill to his office, and he explains that he’s been watching her and has noticed that where other students frown when they don’t understand something, she smiles. He likes that. She asks what his deal is– he seems to be allowed to lecture on anything he pleases, and he’s apparently been there forever. She’s curious about the big blue police box in the corner. He invites her to become his personal tutoring student at 6pm every day, and when he assures her that he’ll take care of the fact that she isn’t (yet) a student at the university, she accepts.

As they get to know each other over the course of a school term (and at least a bit beyond), we also see Bill getting to know another student: Heather. Heather (Stephanie Hyam) stands out as soon as we catch her in The Doctor’s lecture hall, because she has an abnormality in her left eye’s iris that looks like a star. She and Bill encounter each other in a nightclub, and they share an intense moment of eye contact. Bill is smitten, and when she runs into Heather again at school, she willingly follows her crush to see something odd– a puddle Heather has been watching.

The puddle has been there for a long time, despite a recent lack of rain. When one regards one’s reflection in it, something is amiss– it isn’t a true mirror image. Heather is fixated on the puddle because she can see right away that the oddity in her eye is on the wrong side in this reflection, and when Bill finds her gazing at it again, she asks Bill to come over and look with her. By the time Bill works her way around to where Heather was standing, she’s gone. We can see, though, that Heather has disappeared into the puddle… if that’s what it is.

Later, Bill lets herself into the flat she shares with her foster mother and assumes that it’s her she hears in the shower. As soon as she’s all the way inside, though, her foster mother phones from a pub to tell her that she’s not coming home that night. Intrepid Bill grabs the best weapon at hand, an umbrella (which turns out to be a bit telling), and bursts into the bathroom to confront the intruder… but there’s nobody there! She sees water streaming down the shower drain, though, so she (as one would) crouches down to peer into the drain and sees Heather’s distinctive star-eye staring up at her out of it!

Reasonably freaked out, Bill goes running to find The Doctor in his office at the University. She is below his window, watching him pace and trying to decide what to do, when Heather appears behind her. Heather glides, rather than walks, is surrounded by mist, and has water cascading off of and out of her. She looks like every drowned ghost you’ve ever had nightmares about after watching a film with a drowned ghost, and it’s very effective.

Bill approaches ghost Heather, calling out to her. It becomes clear pretty quickly that this Heather is only a shadow– she can only mimic what Bill says, and Bill realizes that whatever she is, she isn’t really Heather.

Bill skedaddles into The Doctor’s office and barricades the door with a chair. It doesn’t matter, though. Water Heather just leaks in under the door as liquid and reforms into Heather inside.

The Doctor, worried that this creature is after whatever he has in his basement vault, hustles Bill into the TARDIS, where they encounter Nardole. They use the TARDIS to go to the basement and check that the vault is unmolested. Bill spends this time convinced first that the TARDIS is a room The Doctor has added to his office that has a funky doorway, then that it’s an elevator. Finally, in the basement she has the “it’s bigger on the inside” epiphany that all newcomers have when they first meet The Doctor’s ship.

The vault is just fine, but Water Heather is wet on their heels. The Doctor decides to test her speed and whether she’s more interested in them or the vault by whisking Bill and Nardole to Australia. Thusly, Bill learns that the TARDIS is more than a lift. Water Heather emerges from the bathroom mirror about a minute after they arrive.

The Doctor tests Water Heather again by taking Bill and Nardole to the edge of the universe, millions of years in the future. Thusly Bill learns that the TARDIS is a time machine, too. Bill crouches to look into a puddle she finds on this future planet, and Water Heather is in it. She emerges like T-1000, smiling at Bill before grabbing her by the face and trying to pull her in.

The Doctor and Nardole pull Bill away to safety, and The Doctor takes them to the past, to a place where he seems to believe they can destroy Water Heather: the Time War with the Daleks. Nardole isolates them from the Daleks in the midst of a battle scene, and one Dalek confronts The Doctor and Bill. Water Heather appears behind them, and when they dodge out of the way, she shifts her focus to the Dalek. It says, predictably, “EXTERMINATE,” and Water Heather mimics it.

Not long after, Nardole reports that they’re separated from the Daleks just as The Doctor and Bill run into one– an odd one whose voice seems a bit off. The Doctor peers into its eye, where he sees Heather’s distinctive star-eye behind the Dalek’s lens. 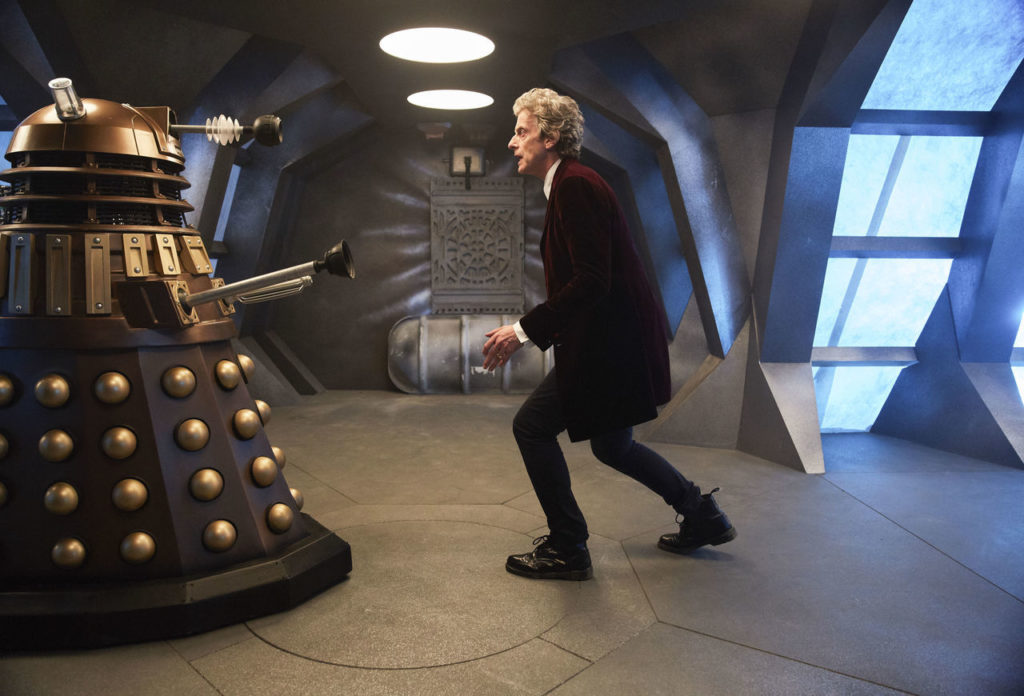 The Dalek reforms as Heather, and The Doctor figures out that this creature was left behind on Earth by a spacecraft and it has taken Heather as its passenger. She’s always wanted to leave where she was, and the puddle understood and accommodated this. Before she left with the puddle, Heather promised Bill not to go without her, though, and the creature has been following Bill only to invite her to come along. The Doctor intuits that the only way to lose the creature is for Bill to release her from the promise.

Bill does so, but then, against The Doctor and Nardole’s advice, she clasps hands with Water Heather and can see the vast universe this creature could open for her.

Once they’re safely home, The Doctor wants to wipe Bill’s memory, but Bill has seen movies before and guesses quickly what he’s going to do. She convinces him to let her keep her memories, and as she leaves his office enjoying them, she is surprised to find him waiting for her outside the office building, standing next to his TARDIS and offering to show her the universe.

This is going to be fun.

Point of note: Bill tells The Doctor that her mother died when she was a baby, and that there aren’t many photos of her. Shortly afterwards, Bill’s foster mother discovers a shoebox of photos of Bill’s mother in a closet. When Bill is tearfully looking through them, she finds one of her mother in a room with a mirror, and the photographer captured in the reflection is… THE DOCTOR!

Lingering question: Why does The Doctor look meaningfully at Susan’s photo when Bill says her mother died when she was a baby?