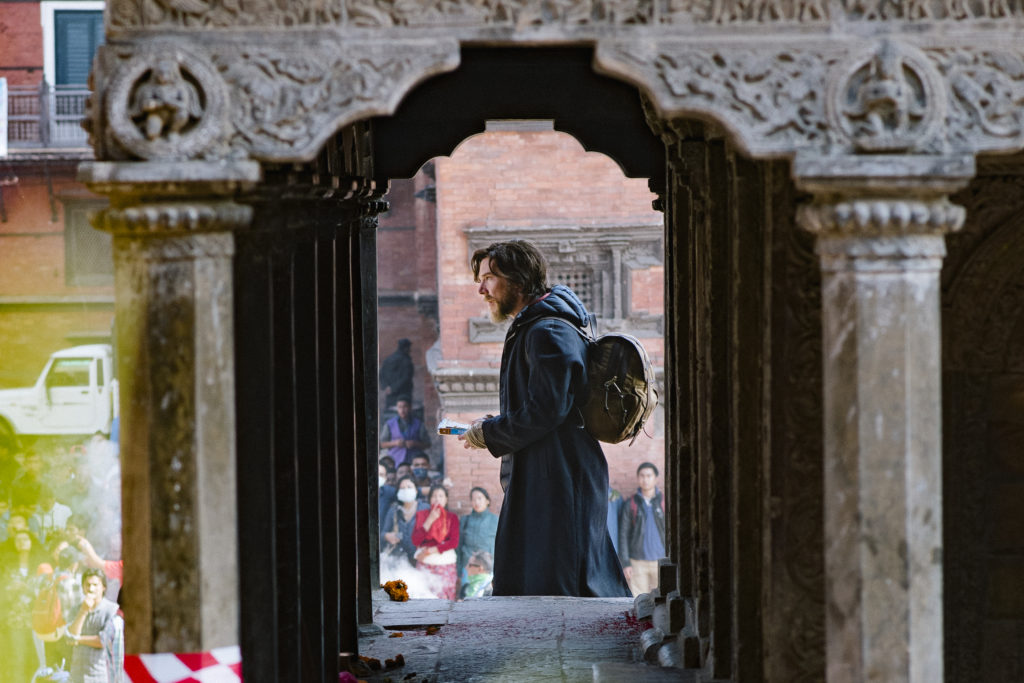 This review should come with a warning. I didn’t grow up reading comics – I grew up in country Australia where, asides from the existence of spiders the size of dinner plates, comic books weren’t exactly prolific. So my experience with the Marvel Universe is relatively new and all to do with the cinematic universe.

This review is written from the perspective of someone who is brand new to Doctor Strange, so please keep your Hawkeye bow and arrow stashed, I promise I’m here to have a good time. Without further ado – let’s get into it!

It’s really, really pretty. They’ve stepped away from featuring just comic pages turning, really launching themselves into the cinematic universe as we know it by including Marvel films into the logo (watch out for Captain America’s shield comin’ atcha!) It feels fresh and exciting, like the beginning of a new phase or something…

But seriously. This is the second film in Marvel’s Phase 3 (with Captain America: Civil War being the first) and I’m fairly sure the new opening wasn’t featured in that film, at least in Australia.

That is basically the best way to describe this film.

You know the movie is about magic and mystical things because there’s a wind chime right at the start. Nothing says mystical like a wind chime. A very complicated and destructive spell is stolen from a mystical library which causes an epic battle that’s straight out of a Christopher Nolan film. It’s absolutely gorgeous, the visual effects companies involved – and the incredible stunt teams – deserve so much praise for what would have been a really complicated brief. So far, the magic is looking pretty darn good.

I’ll get to the Aladdin part later.

And I thought Tony Stark had an ego

Meet Doctor Strange – a neurosurgeon with a photographic memory and a penchant for way too many watches and expensive things. And HUGE HANDS. Seriously. I can’t believe I’ve never noticed how big Benedict Cumberbatch‘s hands are before. Not in a grotesque kind of way, they’re just really… impressive. Anyway. He’s incredibly arrogant and egotistical, two things tied very closely to his job, which makes it challenging to like him because on the one hand he’s a dick, but on the other hand he saves lives.

It’s established fairly quickly that Doctor Strange is incredibly good at his job. The first act involves Stephen performing a delicate procedure that definitely had me holding my breath at the fine work his hands are capable of.

That is to say – were capable of.

While talking to his assistant (at least I think that’s who they are, they’re never seen) he gets massively distracted in his very fancy expensive car and plunges off a cliff, during which his hands become crushed between the steering wheel and dashboard.

The next part of the film was, honestly, my favourite part. It’s really easy in a “comic book movie” to gloss over certain character emotions or journeys. A classic example is when someone kills another person and they don’t react emotionally, whether it’s shock, disgust, joy – basically anything. A lot of characters barely flinch when this happens, robbing the audience of understanding a fundamental part of why they are the way they are, and why they make the choices they do.

When Doctor Strange loses the fine motor skills his hands once possessed, he falls apart. We see his whole world come crashing down- it really gets to him at a fundamental level. He becomes impossible to talk to, constantly irritated and angry, dealing with constant pain and a deep frustration that he cannot cope with life as he once did by trying to fix things, being an award winning perfectionist. It’s Benedict doing what he does best – acting the s**t out of the script and doing a very fine job of it.

Rachel McAdams plays Christine Palmer, Stephen’s love interest and work colleague, who desperately tries to help him cope with what is surely his new life as an ex-surgeon. But Stephen doesn’t want a new life and his behaviour soon pushes her away. Rachel is great in the film but I can’t help but feel as though she was wasted, though that was more to do with the writing and opportunities her character was given to demonstrate who she really is. Her maturity is really beautiful to watch when juxtaposed with Stephen’s emotions.

The Magical Mystery Tour is waiting to take you away

The Doctor learns of a strange (zing!) place that could fix his broken hands, so he whisks himself away to Nepal with the last of his fortune and there he encounters his biggest enemy.

There’s a nice blend of science, mysticism and mindfulness/meditative practice that’s discussed, but it feels a little rushed. The grumpy Doctor is very arrogant, so a very bald Tilda Swinton takes him on a journey to go past what he thinks he knows to a place where he should understand he knows nothing. Like Jon Snow, but with a bit of martial arts thrown into the mix. This section of the movie is one I’d love to have see more exploration in, so we can see more of the process Stephen’s mind takes. Going from total arrogance to greater calmness would have taken some decent time, yet the movie makes it feel like barely any time passes.

Especially because, if he was there for so long, someone surely would have gone looking for him. He’s a famous New York neurosurgeon for crying out loud.

The fate of the world is threatened by the nasty guy (Kaecilius) from the library incident. He sets out to destroy the Sanctums that help protect the planet from other dimensions and nasties. It’s during one of these attacks that Stephen acquires his mystical relic.

It’s the magic carpet from Aladdin.

But it’s turned into a cloak, because rugs are so much harder to clean these days. Seriously, the writers and producers of the film effectively gave Doctor Strange’s Cloak of Levitation all the personality of Aladdin’s magic carpet. And while it made for terrific comedy relief, at times it was a little distracting. Maybe it’s because it makes Benedict look like a terrible magician when pared with that facial hair. 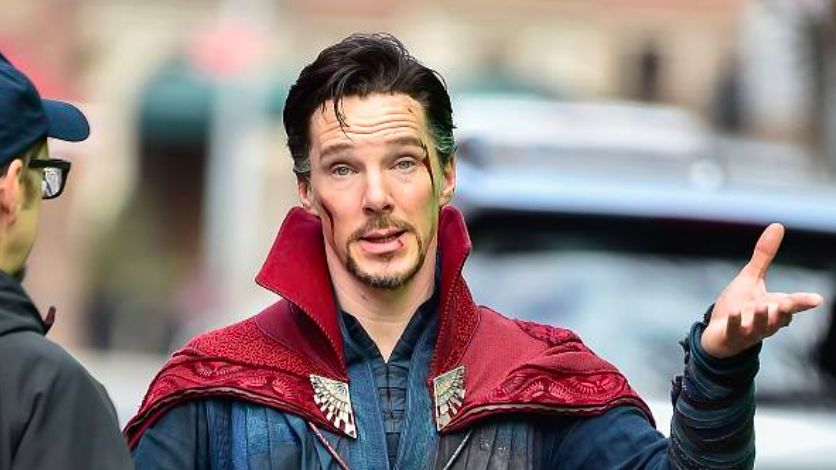 Would you hire me for a children’s party?

Doctor Strange does battle to save the New York Sanctum surrounded by a plethora of other DnD style relics, and is confronted with the truth about the source of the Ancient One’s power. He becomes torn about this disturbing new knowledge and his place within this new war. There’s some great character exploration here as Doctor Strange deals with the death of a zealot, his desire to heal his hands, the new powers he possesses, and the part of him that wants to heal and help others, while also fearing his participation in further destruction.

He is then dragged off to save Hong Kong, in the final glorious battle of the film.

The end of the world

The world comes very close to the end, but Doctor Strange manages to use wit and magic to save the day. Although the battle is not especially “violent” it’s one of the most interesting ones we’ve seen to date in the Marvel cinematic universe. He returns to the New York Sanctum where he keeps watch over the other worldly beings and dimensions that threaten to tear at the fabric of our world as we know it.

Benedict Wong as the amazing Librarian called Wong… brilliant. Totally stole scenes and made me laugh my butt off. Chiwetel Ejiofor is an absolute delight, demonstrating a brilliant physicality in Mordo and strength of faith in the Ancient One that spectacularly crumbles when the truth about her power is revealed. I can’t wait to see where this goes next.

Rachel McAdams, while strong, hasn’t got much to play with in this movie, which is disappointing as there’s only really two female characters of significance. I’d love to see her character in the next film have a greater role to play (and look, admittedly she saved Stephen’s life a couple of times, but what I’m talking about here is a greater role in terms of the story).

Tilda Swinton is a powerhouse as The Ancient One, using her Bowie-esque ability to be out of this world while still being totally accessible as a character. She is both strange yet calm and totally confident in her abilities. Her fight scenes are seriously wicked, but it’s her final scene with Doctor Strange that really nails the vulnerability in her character that is universal to all humans. I wanted to write down what she said because it was so breathtaking but you’ll just have to see it for yourselves.

(Also, the new Rogue One trailer played during the previews – which I had avoided watching earlier for fear of spoilers – but now I can confidently say I have a feeling this might in fact be the best Star Wars movie to have ever been made).

Why on earth did Rachel McAdams have her freaking hair poking out of the surgical cap she was wearing at the start of the movie? Like, I know it’s a movie, it’s not “The Discovery Channel Presents the Real Documentary on Doctor Strange”, but FFS you don’t need to glamourise her character when she’s a surgeon that SHOULD keep her hair covered while in freaking surgery. *headdesk*

Doctor Strange is a great addition to the Marvel franchise and a tricky one to pull off, introducing magic to a world already filled with aliens and technology (and mutants that we can’t call mutants). The writing within this film helps blend magic with reality and science seamlessly, setting a great foundation for when the good Doctor joins the Avengers in the upcoming Infinity Wars. While the story felt rushed with some of the character arcs, the cast are beautiful to watch with plenty of moments that will make you laugh and hold your breath in anticipation. It’s visually stunning, setting the bar much higher for the rest of Marvel’s Phase 3 movies.

Grab your popcorn and get ready to get Strange.

Doctor Strange will be in Thor: Ragnarok.