Recovering some from what I suggested might be the worst episode ever, Doctor Who brings back the iconic Ice Warriors in “Empress of Mars.”

We open, without explanation, at NASA HQ, where the Doctor (Peter Capaldi) and his companions have dropped in on a control room full of people about to reveal what’s hidden beneath the ice cap on Mars. Lo and behold, it’s the message “GOD SAVE THE QUEEN” spelled out in giant letters with rocks. The Doctor uses the TARDIS to determine that the message was left in about 1888. So he, Bill (Pearl Mackie) and Nardole (Matt Lucas) depart for Victorian-era Mars to see who could have left it.

It doesn’t take long for them to discover a regiment of British soldiers camped out beneath the planet’s surface. They’d discovered an Ice Warrior in a damaged cryo chamber on his spaceship on Earth. They had agreed to help him return to Mars in exchange for him helping them mine riches on the red planet. When the Doctor and crew encounter them, they’ve been blasting underground tunnels for about eight months with a ray gun the Ice Warrior, whom they’ve dubbed Friday, helped them make, and they haven’t found anything. 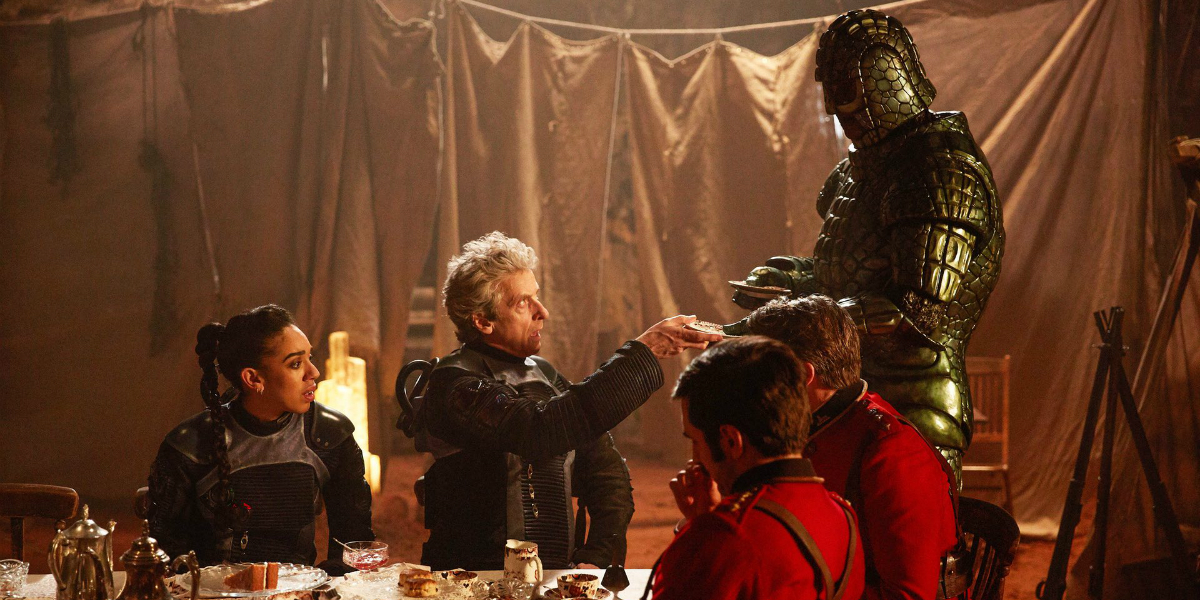 The Doctor senses something’s up right away and tries to get Friday (Richard Ashton) to ‘fess up. The one-eyed Ice Warrior insists that he’s just old and tired, overslept on his ship and missed the apparent extinction of his race while he was away. The Doctor doesn’t buy it.

Just about then, the mining soldiers uncover what appears to be a tomb with a golden sarcophagus covered in jewels in the center. Before they begin pillaging, the Doctor slows their roll by saying it might be more cryo chamber than crypt. He now believes that Friday’s true objective all along was to find his queen with the help of the unwitting laborers he brought back from Earth.

As the Doctor explains his concerns to the commanding officers, one industrious fellow takes it upon himself to liberate some of the jewels on the sarcophagus. He drugs the more diligent of the two guards stationed outside the tomb. When he takes the jewels, the empress awakens and she makes him the first casualty of the night.

The second-in-command, Catchlove (Ferdinand Kingsley), responds to the commotion by bringing everyone into the tomb with guns drawn. The Doctor attempts to intervene, with support from commanding officer Sgt Maj Peach (Glenn Speers). But one soldier’s gun fires accidentally and it’s ON. Most of the soldiers, as well as our heroes, escape the chamber unharmed (for now). Bill shifts the angle of the giant ray gun in time to prevent the soldiers from shooting the empress with it. This results in the tomb’s door being sealed shut with rocks that fall from above. It gives the queen a chance to wake her sleeping troops from their cryo chambers. On the human side, the second-in-command to lead a mutiny and take charge outside.

Catchlove reveals to the soldiers that their leader is actually a coward who was meant to be hanged for desertion but survived. This gives him the needed leverage to assume command and instruct one of his subordinates to lock the Doctor, Bill and Sgt Maj Peach in the brig. While the imprisoned trio are out of the way, he positions his men and the ray gun for battle. 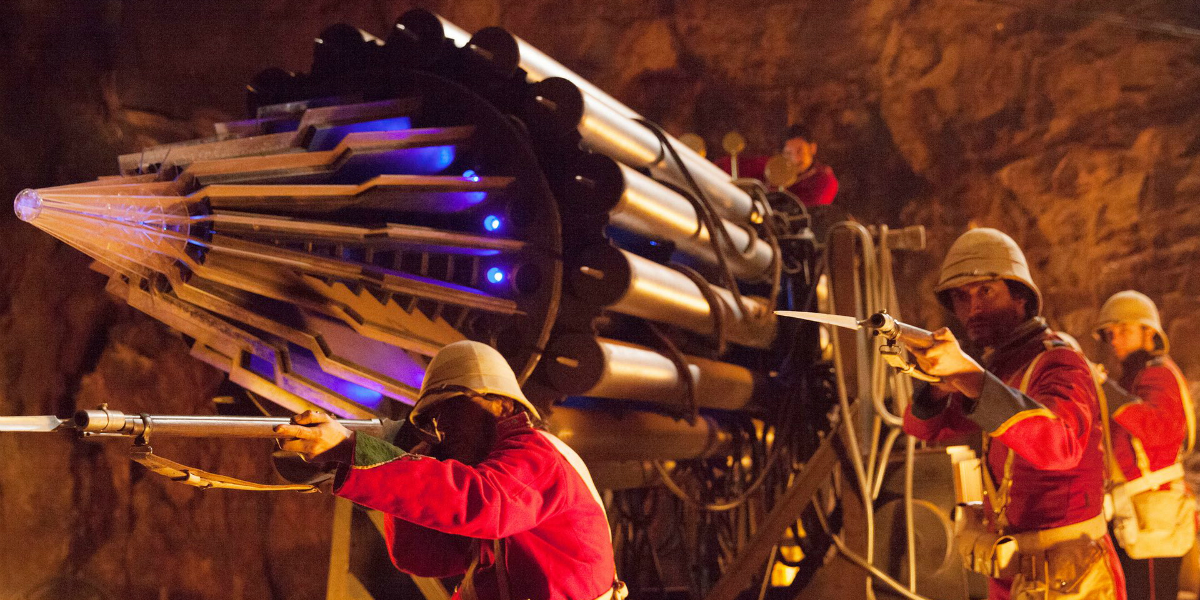 When battle inevitably erupts, Ice Warriors emerge from the ground beneath the soldiers and engage them, led by Iraxxa, Empress of Mars (Adele Lynch). Friday, however, emerges in the brig and helps the captives get loose in the hopes of preventing a massacre.

They step outside, and Sgt Maj Peach apologizes and runs away. The Doctor asks Bill for a distraction, and she calls out to the empress for some girl talk. (Really it’s woman-to-woman military talk, but same diff.). Meanwhile, The Doctor repositions the ray gun. As Bill’s distraction loses strength, the Doctor tells the empress that he’ll blast through to the planet’s surface, bringing tons of snow down on all of them, if she doesn’t disengage. 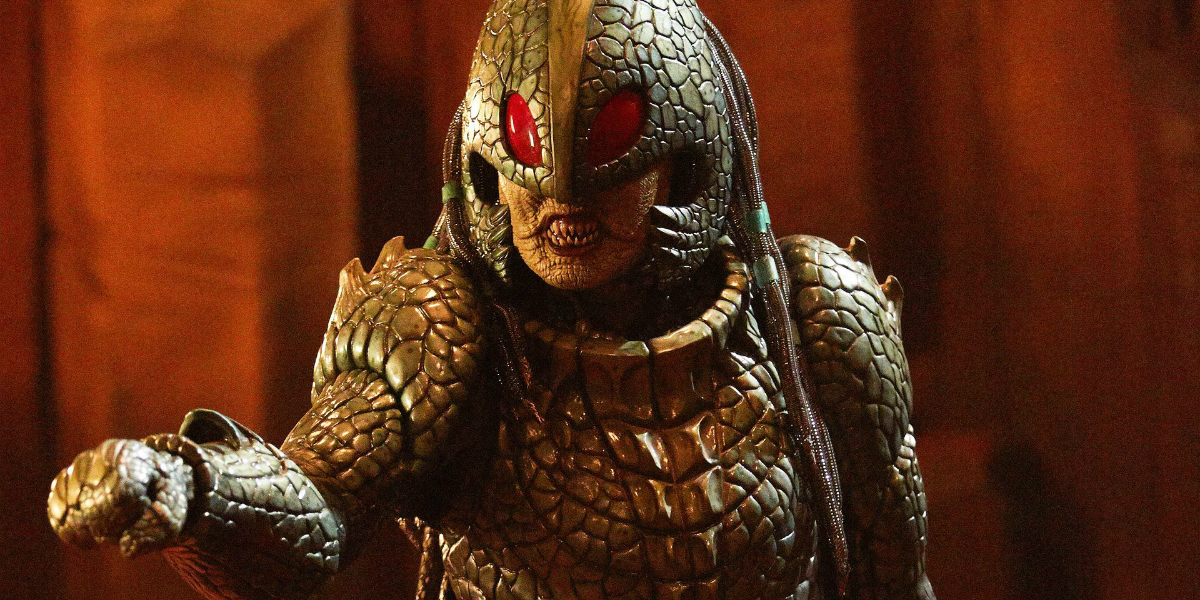 The situation seems about to shift towards peace when Catchlove takes the Empress by surprise. He holds a blade to her throat and announces that he’s abandoning his troops and taking her hostage. Catchlove wants her to help him get Friday’s ship repaired and get him home alone to Earth. He moves the captured Empress towards the lift to the surface. But when the doors open, Sgt Maj Peach is inside and shoots the mutinous Catchlove dead.

Sgt Maj Peach then pledges his life to the Empress as a sacrifice. He begs her for mercy for Earth and for his troops. She is impressed by his warrior spirit. She spares him on the condition that he join her army and move with the Ice Warriors into their new life (facilitated by Alpha Centauri after the Doctor contacted it). Sgt Maj Peach is thereby cleansed of the brand cowardice left on him (figuratively– he still has a massive scar from the failed hanging attempt). He, the Doctor and Bill construct the massive message that kicked things off in the first place.

Meanwhile, Nardole has been away. The Doctor sent him to the TARDIS for rescue supplies when Bill fell into a shaft at the beginning of the episode. But the TARDIS mysteriously auto-piloted him back to the Doctor’s university office. Nardole was so perplexed about how to get back to Mars that he released Missy (Michelle Gomez) from the vault for help. It is she who is at the controls when the Doctor and Bill return to their ship at the end of this adventure. While the Doctor processes Missy’s presence, she asks sincerely if he’s really alright. 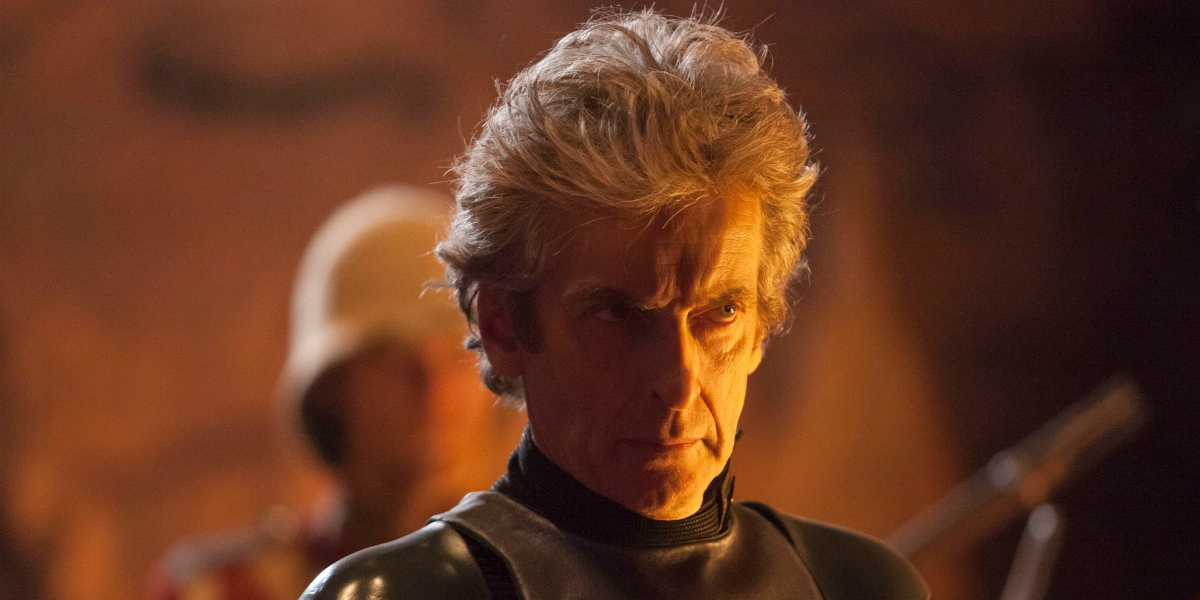 Thought: Am I the only one who feels like they’re trotting Missy out in contrived drips in an effort to build tension towards the regeneration we all know is coming up? I hope that’s not all there is to her storyline.