“Lie of the Land”: worst episode of Doctor Who in the modern era? According to what I’m seeing online, I’m not the only recapper/reviewer who thinks it might be.

When we last saw the Doctor (Peter Capaldi), his sight had just been restored because Bill (Pearl Mackie) gave the Monks her consent to take over the world. Since then, images of what appeared to be the Doctor regenerating ahead of the rumored Christmas Special regeneration were circulating, and hopes were high for whatever surprises were in store. Unfortunately, the only surprise is how big a thud the second half of this three-parter landed with.

It’s apparently been six months since Bill asked the Monks to take over the world. In that time, she has not seen the Doctor or Nardole (Matt Lucas), she’s been having imaginary conversations with her dead mother and the world is under the influence of broadcast delusions from the Monks that have convinced everyone that the Monks have always been here. Bill struggles every day to maintain her mental clarity and her grasp on the real truth.

One day, Nardole shows up at her flat to say that he was laid up for six weeks after being exposed to the bacteria and has spent his time since then searching for the Doctor. He has finally tracked him down to a Monk-run prison ship off the coast of Scotland.

Nardole and Bill arrange with a disgruntled sea captain to sneak onto the prison ship. The captain, like many people, has a son who has been put in a labor camp by the Monks for thought crimes. This means the captain wants to help them resist the Monks.

Once onboard, Bill and Nardole find the Doctor almost immediately and with nearly zero effort. When they do, the Doctor insists that he’s making propagandist TV broadcasts for the Monks because he’s for reals joined up with them. Blah blah blah, he calls in guards, seems to call the Monks on the phone and a distraught Bill decides that the only way to save the world is to steal a guard’s gun and shoot the Doctor in the chest several times. (WHAT?) 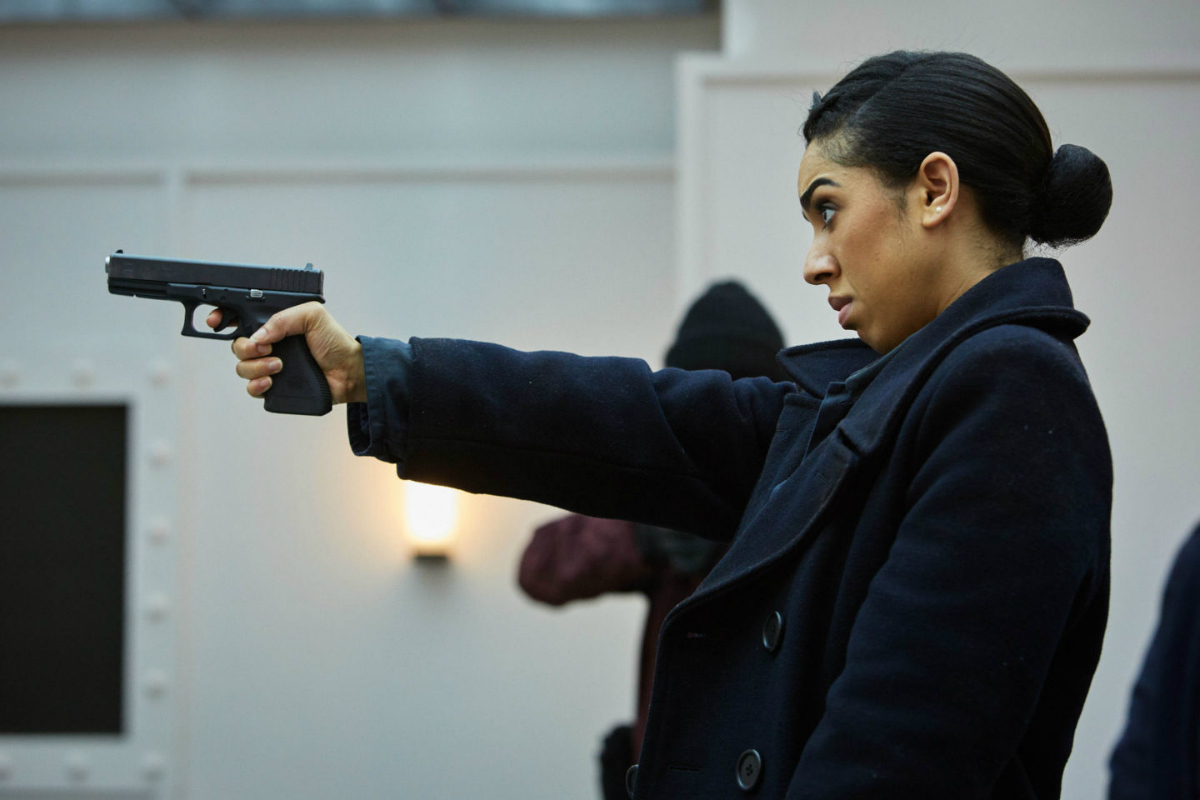 He starts to regenerate, hence the misleading pics, and then stops and is all like, “Gotcha!”

Nardole and the guards join in having a laugh at Bill’s expense. OF COURSE the Doctor isn’t working with the Monks, and for some reason he’s been avoiding Bill for six months while doing everything the Monks say and not trying to leave the prison ship. In that time, though, he’s planned this elaborate hoax for Bill, in which he sets her up to think she is murdering him??? Ugh.

As soon as Bill has recovered too quickly from the whole bizarre scene, the Doctor drives the prison ship to land so he and his companions can overthrow the Monks. Why he waited six months to do this, making Bill go so crazy that her conversations with her dead mum narrate the whole episode, is a mystery.

The Doctor decides he needs to talk to the only person as smart as he is for ideas about defeating the Monks: Missy (Michelle Gomez). He takes Bill into the vault to meet her. Missy mopes about. Then she trades information about the Monks for a random jumble of things that Bill promises to provide, and it turns out that the Monks have been oppressing humanity by using Bill’s consenting brain as the starting point of a global transmission of lies. They use statues of themselves in every town as transmitters. Missy says the only way to defeat the Monks is to render Bill brain dead so the transmission stops and the true history is restored. 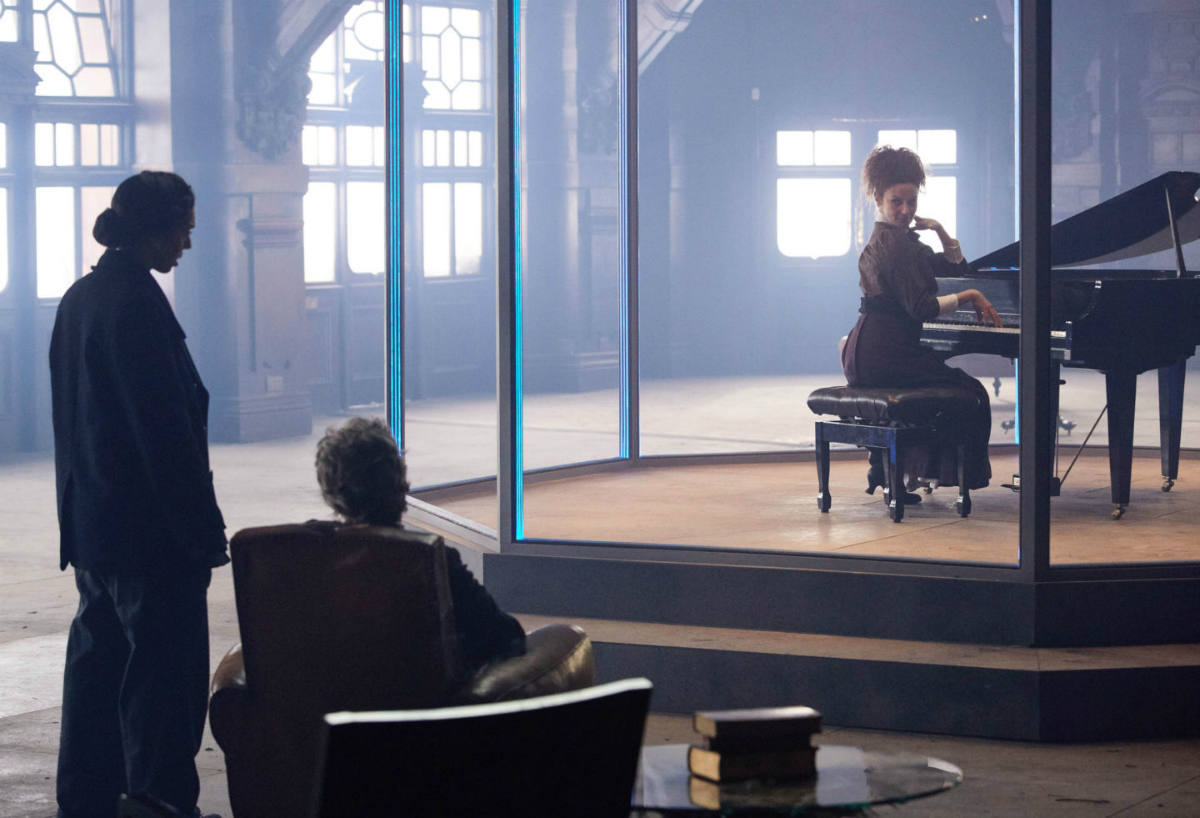 The Doctor refuses to let Bill render herself brain dead after this conversation, and instead he takes a team of his prison guards, Bill and Nardole into the Monks’ pyramid, which is now parked in London. There are no guards outside, because it turns out only 12 Monks came to Earth. Everyone walks into the pyramid and a half-hearted fight breaks out that delays them from quickly finding the monk strapped to the transmitter inside. Why there is a monk strapped to it…. who knows? (The Doctor quips that this is “fake news central.”) 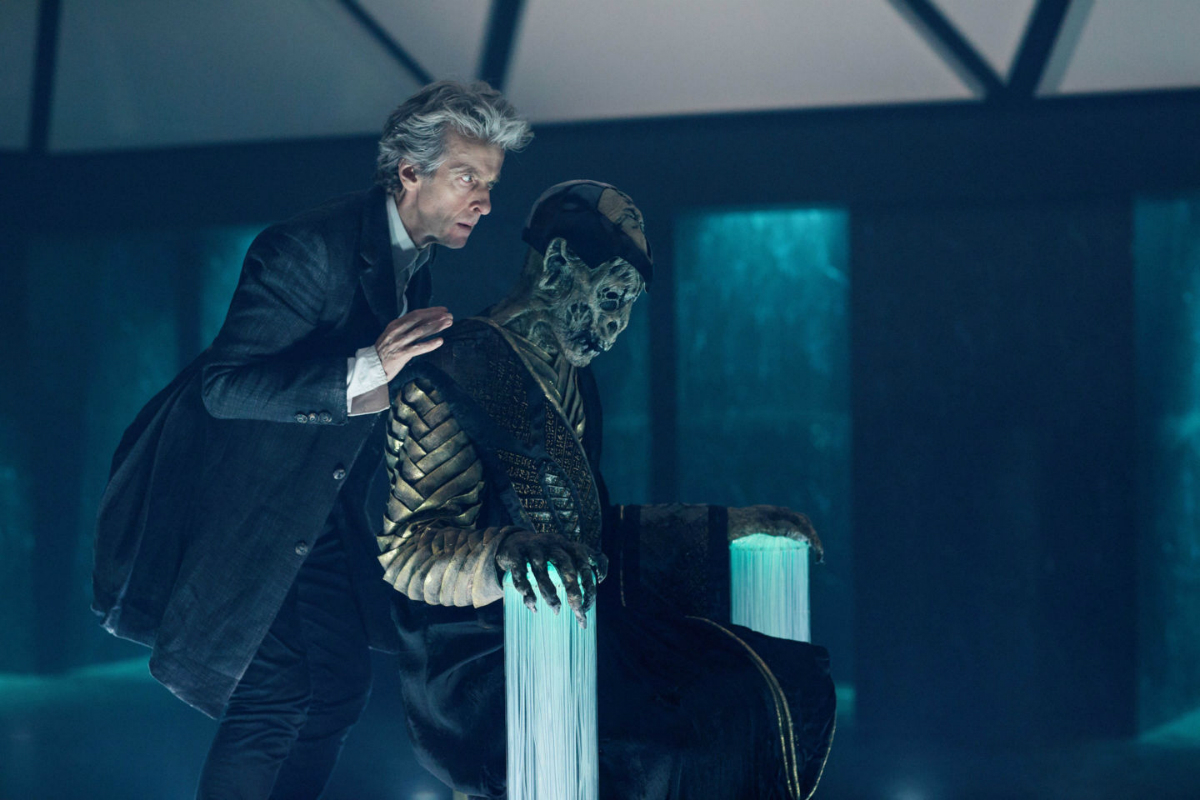 They don’t want to kill him or break the transmitter because something about erasing the old history, so instead the Doctor grabs onto the transmitting monk’s head and internally battles with him over the transmission. This knocks the Doctor out, so Bill ties him up and is ready to sacrifice herself by taking his place when he awakens.

Then (and this is when I audibly cried, “Come on!), while holding onto the transmitting monk’s head, Bill thinks about her dead mum smiling at her and reaching out to her, and the thought is so pure that it disrupts the signal and restores everyone’s perception of reality instead of replacing Monk-history with Bill’s memories. They leave the pyramid unscathed and unchallenged, the people in the neighborhood look dazed and then chase one monk, and the Monks run away from Earth.

Later, Bill and the Doctor sit under a destroyed Monk statue and a passing girl appears to have no memory of the Monks because humanity is doomed not to learn from its mistakes. The logo on the statue’s base looks suspiciously like a certain orange president’s logo. Episode’s heavy-handed and messily delivered message: TOTALITARIANISM HAPPENS WHEN PEOPLE ACCEPT THE ABNORMAL AS NORMAL.

Finally, the Doctor and Missy hang out in the vault while Missy cries over remembering the names of everyone she’s ever killed.

I got a chance to be on a roundtable interview with the newest members of the #TWDFamily. Read how they describe their characters, their #TWDU experience and why you should watch the new show #TWDWorldBeyond. 😁 https://twitter.com/GeekGirlAuth/status/1318387748382953474

For F2P Friday we are going spooky! Amarok Dreams

This week's Woman Crush Wednesday goes to the zomb

Calling all writers! GGA is looking for contributo