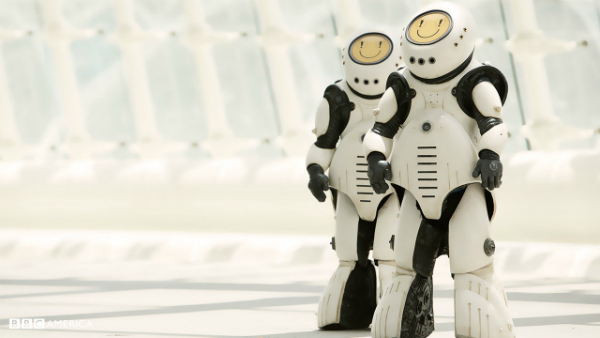 I love episodes of Doctor Who that play with the idea that our unquestioned reliance on technology is likely to be our undoing. Whether it’s suspicious free earbuds that give humans an unwelcome upgrade, suspicious nav systems that poison the drivers of the cars they’re installed in or Wi-Fi that wants your soul, Doctor Who‘s writers are regular J. Walter Weathermans when it comes to warning us about being too complacent in our use of technology. With that in mind, it was a nice surprise to see the Doctor find a way for humans and robots to (eventually, hopefully) get along in Smile.

The Doctor (Peter Capaldi) and his newest companion, Bill (Pearl Mackie), are about to set sail in the TARDIS for the first time when Nardole (Matt Lucas) pops in to remind the Doctor that he’s taken a vow not to leave the Earth. (Which is news to us– right?) As soon as he’s gone, the Doctor defies his pasty alien friend and lets Bill choose whether they’ll go to the past or the future, promising to bring them home to the exact moment at which they’re leaving.

Bill chooses the future– to see if it’s happy– and they fly away to a new planet in the distant future, one colonized by Earthlings and nearly utopian… except for the robots who have just killed every human in residence who wasn’t smiling.

The TARDIS lands in an idyllic wheat field under blue skies dotted with fluffy, white clouds. There’s a sleek, white city in the near distance, and the Doctor and Bill make their way to it, stopping briefly when they feel their ears burning and realize they’ve been fitted with some kind of communication device that projects other people’s voices right into their heads.

Once inside the city, Bill notices straightaway that there isn’t anyone there. The Doctor has noticed this, too, and he’s concerned.

They’re greeted by a friendly (seeming) robot that looks a lot like Honda’s ASIMO. The robot gives them each a yellow disc that displays an emoji that corresponds to the holder’s emotions. The Doctor believes that it’s linked directly to their nervous systems. The discs go blank when the holder looks at his or her own, and once it is put on, it self-attaches to to the holder’s back. This means that the wearer will never be able to see his or her own emotional-indicator emoji– but the robots see all.

Bill and the Doctor are served a meal of what appear to be algae jello cubes, and the Doctor supposes aloud that they’re on the Earth colony before the colonists have arrived, which calms Bill. She’s having a wonderful time, and he begins pretending to be, too. 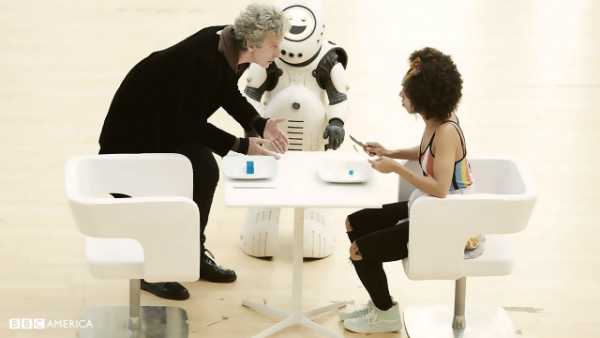 They wander the city, and in a garden enclosure the Doctor finds a locket on the ground. Then it begins to “snow” on the plants, and Bill puts her hand in the rain of white dust coming from an overhead sprinkler system, wondering what it is. The Doctor knows: it’s a calcium-based fertilizer. A moment later he’s opening an innocuous-looking container at the end of the garden to reveal the skeletons of slain humans, which are being ground into fertilizer for the crops. Soylent Green, anyone?

What follows is a very Doctor Who sequence of Bill and the Doctor using a mix of wits and endurance to escape the robots and the city. As they flee into the wheat to reach the TARDIS, we see part of the city wall break off and become a swarm of microbots while the rest of the robots stand like angry sentries, watching the humans run away.

But it’s too early in the episode for that to be that! Of course the Doctor is just trying to “protect” his companion by stashing her in the TARDIS while he goes to blow up the city and prevent the arriving colonists from becoming fertilizer. And of course she refuses to stay put. So together they go into the heart of the city in search of the ship that would have brought the first humans, the skeleton crew (punny!) dispatched to prepare for the colonists, to this planet on the Doctor’s assumption that they would have built out from it. 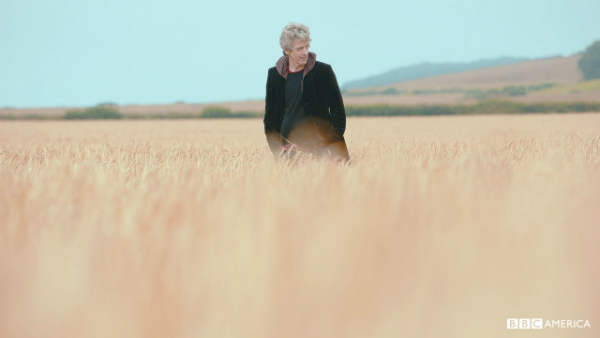 Sure enough, the ship is there. They enter it easily, and it responds to their presence by activating all of its systems. The Doctor tries to ditch Bill again by leaving her to read a map he’s already memorized and use the communicators in their heads to give him directions. When she finally realizes she can just take a photo of the map and follow him, she makes a detour into a room full of artifacts from Earth and discovers the corpse of an elderly woman laid out on an altar with a thick video-book at its foot. In the book, she sees images of Earth’s history up to and beyond her own, culminating in war and disaster, which leads her to question what it was that made Earth’s people choose to colonize other worlds.

Before Bill can recover from the shock of this and join the Doctor, she’s surprised by a boy– a boy we have already seen in the locket the Doctor found.

She takes the boy with her to find the Doctor, who is just about to succeed in turning the ship’s engine into a bomb that will blow the city to smithereens. Fortunately, one robot has followed them into the ship and grabs the Doctor before he can succeed. The ensuing struggle (which the Doctor of course wins) creates enough of a delay that there’s still time to stop the explosion when Bill brings the boy in.

The Doctor has been right about a lot so far, but he was wrong that the colonists are en route– they’re in hyper-sleep, and by entering the ship, Bill and the Doctor have unwittingly initiated the process of waking all of them up.

While they scramble to find a way to stop a massacre when the humans and robots meet, Bill tells the Doctor about the dead woman. They visit her body, and the Doctor is able to determine from the video-book that this woman was the first human to die on the new planet. The book also tells him that after she died, the rest of the humans were wiped out within a morning. It takes him mere moments to understand that the robots the humans had dispatched into this world to build their home, grow their food and ensure their happiness had mistaken grief over this woman’s death as a plague that needed a cure. Since their primary objective was to ensure happiness, they killed all of the unhappy people (which quickly included all of the people) to kill the unhappiness. With this insight into the robots’ motivation, the Doctor is sure he can work things out…

Unfortunately, when he clues in the first batch of awakening humans, they don’t care to find harmony with the robots that killed their families. They grab guns and attempt to overcome the robots with them, succeeding in shooting only one robot before chunks of the building dissolve into attacking microbots.

The Doctor, waiting until the last minute to save the day as usual, pulls off the slain robot’s head and uses his sonic screwdriver to reboot their system. The robots’ memories are wiped, they don’t know who the humans are and they no longer have the primary objective to maintain their happiness. What they do have, though, is a sense of ownership of the city and the planet, and the Doctor advises the humans to treat the robots like the indigenous species and the robots to seek rent.

With human-robot peace in the making, the Doctor and Bill return to the TARDIS and head back to 2017 London to assure Nardole that they haven’t gone anywhere. Too bad for them, London is NOT what it used to be when they return, as evinced by the elephant charging them when they open the door.