Home » Stuff We Like » Disney Announces Opening Dates for STAR WARS: RISE OF THE RESISTANCE

Disney is going all-in with Star Wars in its parks. Star Wars: Galaxy’s Edge is up and running in California and Florida is following on its heals in August of this year. Now, the Disney parks are immersing us even further into the galaxy far, far away. The Disney Parks Blog announced on Thursday morning that they have dates for the opening of Star Wars: Rise of the Resistance.

Star Wars: Rise of the Resistance is an immersive ride where guests to the parks will be thrown into the midst of a battle between the First Order and the Resistance. Here’s how the blog described the experience. “Guests will be recruited to join Rey and General Organa at a secret base. Along the way, they will be captured by a First Order Star Destroyer. With the help of some heroes of the Resistance, they break out and must escape the Star Destroyer, protect the secret base, and stay one step ahead of Kylo Ren.” Sorry, First Order fans. It doesn’t look like you’ll have a chance to enact your dreams of galactic domination. 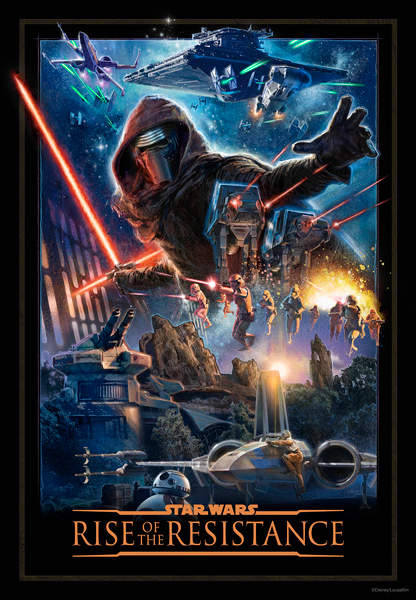 Interested? Of course you are! Rise of the Resistance will first be available to guests at Disney World in Florida on Walt Disney’s birthday: December 5, 2019. Soon after, it will open at Disneyland in California: January 17, 2020. Go get your rebel on! Punch it!

RELATED:  What We Know About the New Planets and Characters in STAR WARS: THE RISE OF SKYWALKER