Over the weekend a little movie called Batman v Superman: Dawn of Justice hit theaters and had a great time owning the world, coming in with a worldwide gross just shy of $425 million.

In it, Lex Luthor (Jesse Eisenberg) has a pretty dynamic story that sees him hating both Superman and Batman and pitting them against each other, but he’s also working behind the scenes to create Doomsday, which he does on a crashed Kryptonian ship, where he also discovers some other technology. However, it was never really truly established in the film just where he gets all of this specialized alien information. It’s just, at the end of the film, Luthor seems to somehow know that Darkseid, or some evil force of some sort, is coming for Earth.

Well, Warner Bros. (thanks to CBR for finding it) released this deleted scene that could shed some light on just where he got his information.

In the scene, we see a strike force infiltrate the crashed vessel, laser scopes on, and then come across a strange alien who holds three boxes in front of him before suddenly disappearing to reveal Lex standing behind him, up to his chest in alien goop, with the laser sights focused on his back.

CBR theorizes that, due to the nature of Bruce Wayne’s apocalyptic visions and the fact that this is very clearly alien and those seem, very likely, to be motherboxes, that the alien that disappears is none other than Steppenwolf, a general to Darkseid. 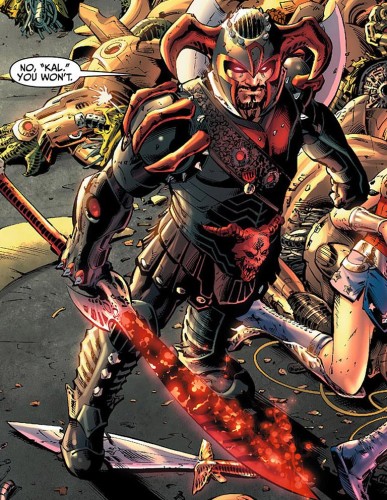 All in all, if this is Steppenwolf, it’s stupendously bad news for the soon-to-be-formed Justice League.