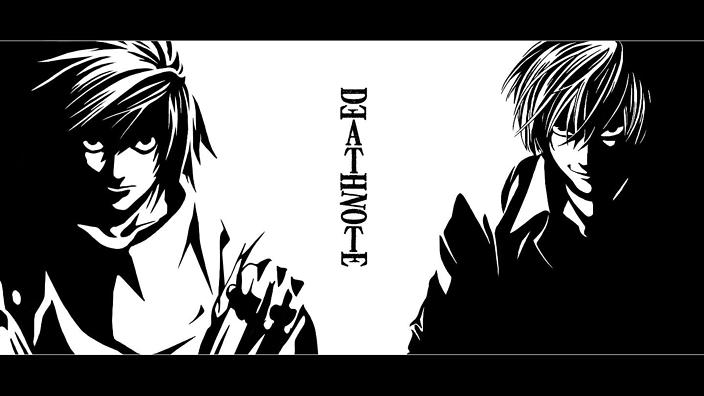 If you’re like me, and you love anime, you’re more than a little concerned about the live action remake of one of the most popular anime of the last ten years: Death Note. Although this is not a remake and is technically a continuation of the story, live action anime themes give fans some trepidation. Here is why you should be excited about Death Note 3: Light Up a New World 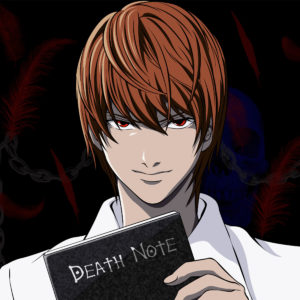 Totaling 40 episodes, Death Note is the chronicle of Light Yagami. Light is a model student, who happens across a Death Note at school while walking home. Recognizing this is not a normal notebook, he becomes curious. He opens the front of the notebook, seemingly innocuous except for the startling title, and the first five rules are revealed to him.

A Shinigami, a Japanese God of Death, named Ryuk, appears before Light, and explains that he dropped the Death Note out of boredom. As Light has touched the Death Note, he is the new owner, and can communicate with Ryuk, although no one else in the human world can see or hear the Shinigami. Light tests the Death Note on a local criminal, who is holding hostages in his district. Excited that the Death Note works, Light begins a crusade to oust the world of its most heinous criminals. Light wishes to create a new world order, in which the just will live in harmony, and the wicked will see swift judgement, discouraging crime as a whole.

The First Five Rules of the Death Note are: 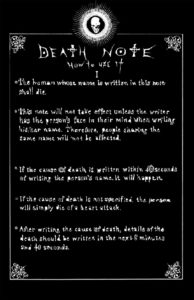 The Rules Page of the Death Note

As Light’s  “crimes” become more numerous, a task force is created to find “Kira” the name given to the person able to kill criminals via heart attacks from a distance. This task force is headed by the illustrious, mysterious L, an eccentric detective, who has taken a personal interest in the case. The show chronicles Light’s evasion from L’s task force, and L’s pursuance of “Kira”, as they both inspire people around the world to follow in their footsteps.

Death Note became wildly popular in Japan and later in the United States, spawning two additional movies after the run of the show was completed. If you’d like to start watching Death Note, now is the time. Later this year, a third Death Note movie will be released.

The trailer for  Death Note 3: Light Up the New World, shows fans a new story beginning. This movie, set ten years after the events of Death Note (which occurred in 2006, as the show was released) starts as six Death Notes are dropped to the human world. Some are taken to be used to further the legacy of Light Yagami as new finders of Death Notes who previously worshiped “Kira” wish to follow in his footsteps. However, some people are not as taken with “Kira”.  Tsukuru Mishima tries to hunt all six Death Notes down to be destroyed. At least two people are direct descendants of L and Light.

There also apparently a cyber attack on millions of computers via a virus worshipfully named “Kira”, descendants of L and Light battling it out, and anything with the possibility of six different killers being active at any one time is bound to be exciting, if a little confusing. I’m definitely looking forward to this installment in the Death Note Saga.

The movie Death Note 3: Light Up the New World will be released in Japan on October 29th, 2016.

In order to fill in the gaps between Death Note storylines, a three-part miniseries named Death Note: New Generation is also being filmed in Japan at present.