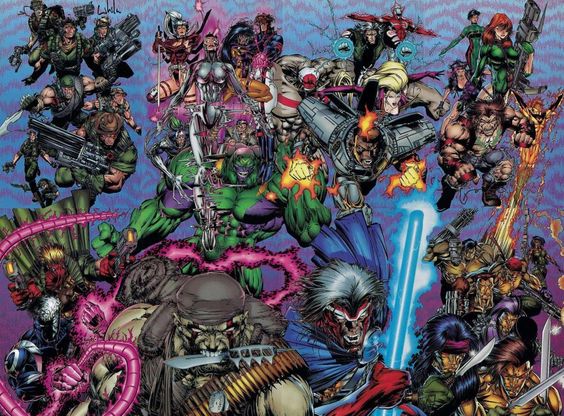 This week DC Comics announced they are bringing the WildStorm imprint back from the dead.  Warren Ellis will helm the old, but new, imprint and bring back many familiar characters.

WildStorm was founded in 1992 by the legendary Jim Lee and, originally, under the Image Comics umbrella.  The name came from a mashup of Lee’s two main books, WildC.A.T.S. and Stormwatch, but the lineup also included Wetworks, Gen13, DV8, and The Authority.  WildStorm was responsible for finding some of our most iconic artists such as J Scott Campbell and Brett Booth in talent searches, just to name a few.

In 1998 DC Comics acquired WildStorm and its stable of titles.  In 1999 the imprint made its DC comics debut and continued to remain a separate entity and universe until 2010 when the imprint was shuttered in anticipation of the New 52 launch.  The New 52 found the surviving WildStorm characters folded into the DC Comics universe, for better or worse.

When talking to Comic Book, Warren Ellis had this to say “After long reflection, I couldn’t turn down the invitation to renovate the house that Jim Lee built, and refit its unique combination of cosmic paranoia and paramilitary conspiracy for the post-political space madness of the twenty-teens,” said Ellis. “Looking back to look forward.”

WildStorm will debut in mid-February 2017 with a regular monthly comic titled The Wild Storm, written by Ellis with art by Jon Davis-Hunt. This series will reset the universe and introduce new iterations of classic WildStorm characters. From there, we will get Michael Cray, WildC.A.T.S., and Zealot.  No word yet on any other titles or creators.

I rabidly consumed Image, WildStorm, and Cliffhanger comics back in the day.  In fact, I still have all of those titles mentioned above and more.  I can’t wait to see what this new launch and reboot will do for the characters and universe.  I just want more Wetworks, and Gen13, in addition to the other titles.

Zealot and Grifter are coming back, two of my favorites  from that universe, but give me more Misery… I loved that evil bitch.  Although, I think she will fall firmly under CyberForce which is still under Image Comics.  Wonder if we will ever get another CyberForce/ WildC.A.T.S. crossover now that both titles have been revived.  Probably not, but I can hope.

We should find out more this weekend during NYCC.  In the meantime, enjoy the character designs below, courtesy of Comic Book.