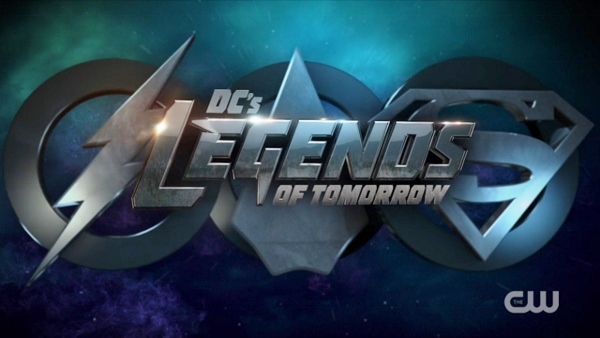 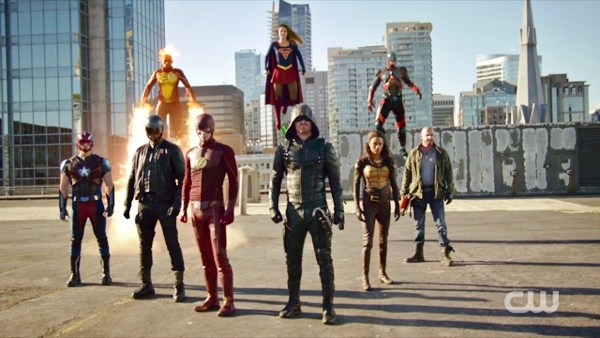 After learning the Dominators’ plan for the world, the Legends must work together with The Flash, Supergirl,  and Team Arrow to save Earth. Professor Stein distracted by an aberration he realizes he may have created.

Oliver (Stephen Amnell), John (David Ramsey), Sara (Caity Lotz), and Ray (Brandon Routh), re-join the rest of our crossover team. However, Thea (Willa Holland) has returned home.  Noticeably absent from the team meeting are the West family and the Team Arrow newbies. Everyone discusses the best possible way to find out what the Dominators plan is. Nate (Nick Zano) tells the team about the footage from 1951 and a Dominator was captured.  The idea is to time travel back to 1951 and kidnap a Dominator to interrogate.   And to try and create a weapon that will defeat the Dominators. 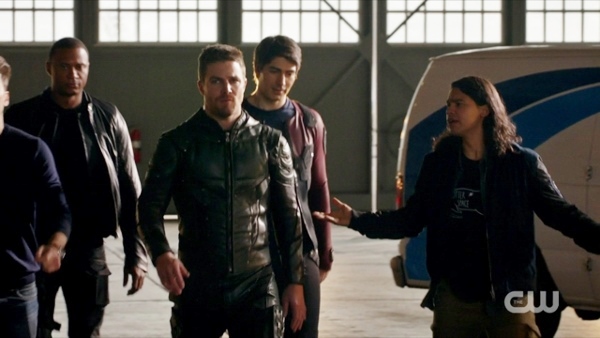 Team Legends, Nate, Amaya (Maisie Richardson-Sellers), and Mick (Dominic Purcell) head for 1951.  Cisco (Carlos Valdes)  and Felicty (Emily Bett Rickards) join them and completely geek out about time travel.  Felicity doesn’t do well in time travel and the Tech Support are left behind on the ship.  Felicity takes the opportunity to talk Cisco into being friends with Barry (Grant Gustin) again.  Cisco is not having it. His reasoning is that Barry was so determined to save his own family that he destroyed Cisco’s family.  He cannot forgive Barry for what he did.

Barry, Oliver, Sara and Ray go to meet the new president. Kara (Melissa Benoist) offers to go to, but Oliver asks her to stay behind.  He says he is dealing with a new threat that he hasn’t figured out how to handle.  He needs things to be as normal as possible for him to focus on the task. Kara makes him nervous because she is an alien. 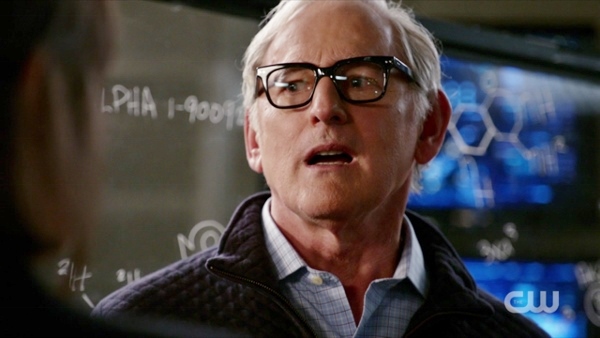 Professor Stein (Victor Garber) is working on developing a weapon that will defeat the Dominators.  Caitlin invites Lily Stein (Christina Brucato), the professor’s daughter to help them. She has a PhD in Nanotechnology from MIT.  Stein is very uncomfortable around Lily.  Lily continues to bring up memories that the Professor doesn’t have.  Caitlin tells him he is treating her like stranger.  He says she should not exist.  She is a aberration of time.  Caitlin asks him if he going to erase her.  Professor Stein says no, but he will fix the timeline that Barry broke.

Nate, Amaya and Mick got to find the battle site from 1951. They see a lone Dominator and go after it.  Once they capture it, a team of suits or “men in black” come in and take the Dominator away. They tranquilize the team as well and take them into custody.  At the base, the Legends wake up and see the Dominator in the room with them.  They ask it why the Dominators are attacking Earth. He tells them that there was a surge in meta human activity.  They are there to determine if the meta humans are a threat.   The Dominator is taken away for testing. 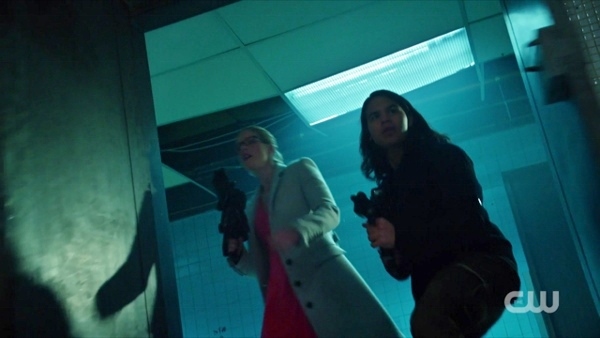 Felicity and Cisco know the others have been captured.  It’s up to tech support to save the day. They bust in the room with guns in hand.  Mick’s response…”saved by geeks.” (Hahaha!)  The team decide to save the Dominator from torture.  They take the Dominator to his ship and return to their own time.  Cisco manages to steal what he thinks is a transponder from the alien ship.

The President is a no-show at her meeting with Barry, Oliver, Sara and Ray.  Instead, the same “men in black” type of suits show up. They tell the team that the Dominators are there because Barry broke a truce when he created Flashpoint.  The government made a deal with the Dominators to give them Barry and they will leave earth. 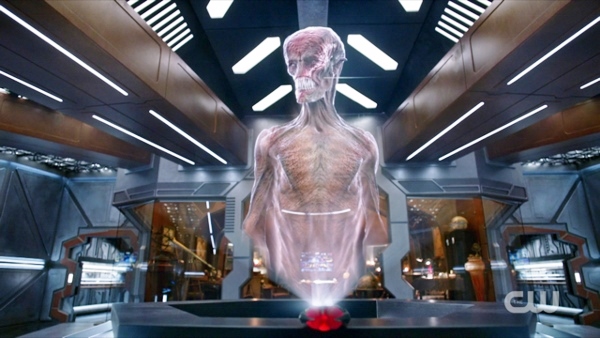 The time travellers return to 2016 and the transponder starts to light up. The Dominator from 1951 is on the other end.  He tells them that because they saved him, he will spare their lives.  He tells them that Barry has to surrender.  Or they will deploy a weapon that will destroy all meta humans.

They tell others from the team.  Now they have to find a way to save Barry and all meta humans on earth.  John and Jax (Franz Drameh) arrive and tell them that the Dominators have ships are moving in worldwide.  They are trying to force the team to make Barry surrender.  Sara tells them to contact the Dominators to try and negotiate. 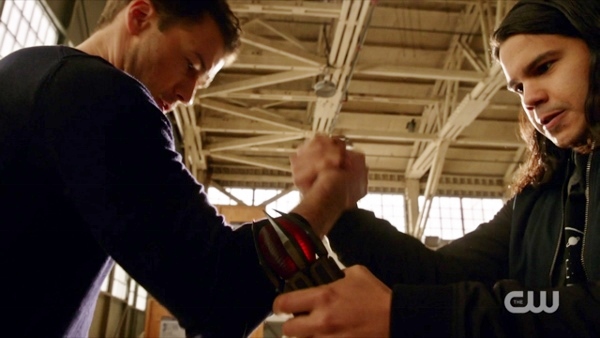 The Dominators are not answering the call.  So Nate and Cisco team up to vibe onto the Dominator ship.  The Dominator tells them that the meta humans are a threat to his own planet.

Cisco gets it.  If they use their powers to make the world better, what if they are actually destroying it.  They messed with time when they save the Dominator in 1951.  Their actions brought about the attack of the dominators.  Cisco understands how Barry is not at fault for his brother’s death.  Cisco was trying to make things right…like Barry.

Lily is having trouble with her stabilizing the molecular structure of her research. She storms out of the room in frustration.  Caitlin tells Stein that had more to do with him than the project.  Stein talks to Lily.  He tells her that his life has gotten complicated and it is not meant to be personal. She starts to rebut his explanation for why he’s distant towards her, but she figures out why her findings aren’t working. Something to do with the replication is subsequential instead of exponential…it needs greater complexity…*shrugs.*  This lets Stein finally see that Lily truly is his daughter. 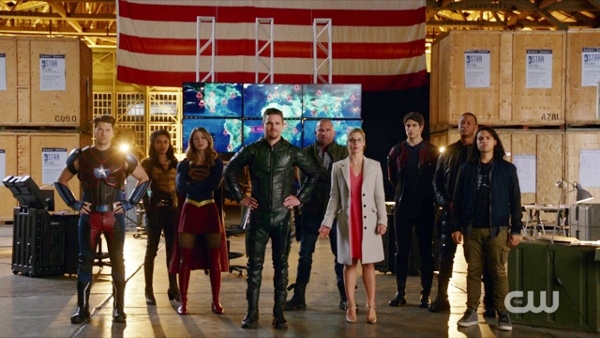 Barry tells the team that he is going to surrender to the Dominators.  Everyone tries talk him out of it.  The others will not let him surrender.  They may be doing more harm than good, but that’s what they do. They are heroes and they have to take a chance that this is the right thing to do.  Cisco says hero or no hero, Barry is his friend. He won’t let Barry sacrifice himself.  Jax and Sara inform the team that the ship in Central City has opened up.  Time to fight!

The ship drops the meta bomb on Central City.  Dominators are everywhere to stop the team from interfering with their plans.  Cisco and Sara are in the Waverider to stop the bomb.  Stein has created a device that will cause the Dominators loads of pain.  They have to place the devices on the dominators quickly before they figure out what is going on.

The team fights the dominators while Barry puts the devices on them.  Cisco and Sara use the tractor beam to slow down the meta bomb. A Dominator throws Green Arrow off a building and he is saved by Supergirl. 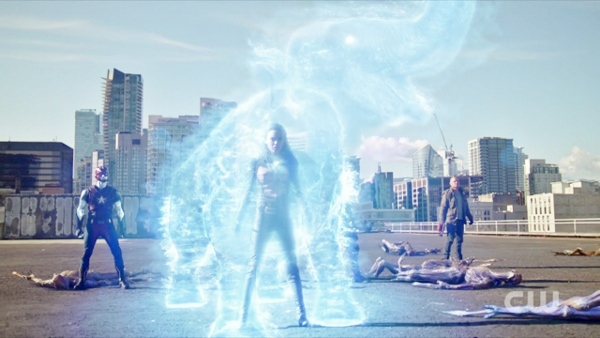 A lot of the Dominators in Central City have the devices.  Supergirl and Flash rush to take care of the ships around the world. Felicity has the devices to active the pain.

Firestorm lands on the meta bomb.  They are going to transmute the bomb into something harmless.

Felicity activates the pain, but Firestorm is having a hard time defusing the bomb.  It takes all of his strength to destroy it. 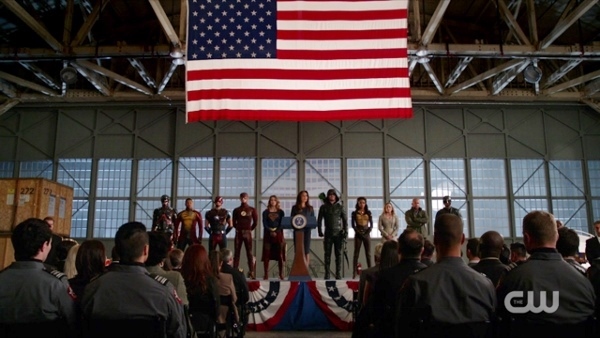 The President addresses a small public speech about our heros.  She cannot give the address publicly because their existence must remain a secret.

The whole team celebrates later in the hanger. 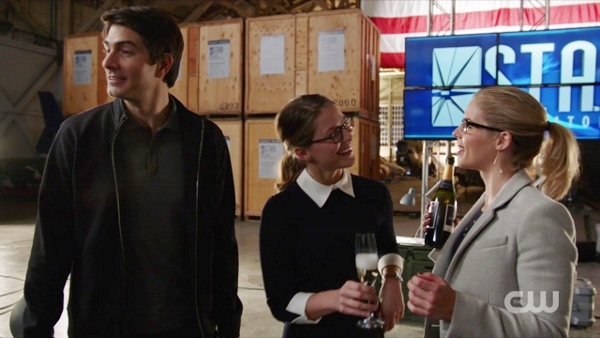 Kara comments that the team is strong, meta human or not.  They are earth’s mightiest heroes.

Oliver apologizes to Kara. He says that their earth could use a Supergirl.  Kara says her world could use an Oliver Queen.  Hardship makes them stronger and that’s why the group looks at him as their rock. 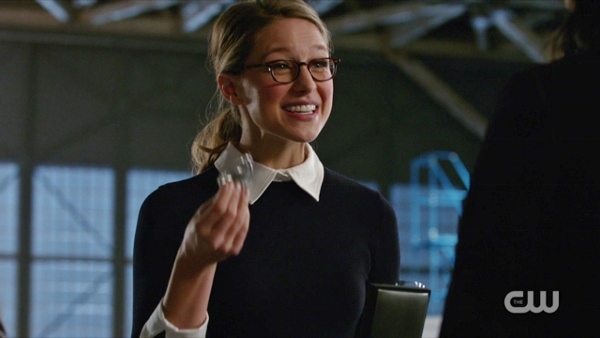 Cisco gives Kara a interdimensional extrapolator…she can move between her dimension and theirs whenever she wants or needs to.  And she can communicate with them much easier.  Mick takes the opportunity to tell “Skirt” to call him.

Jax confronts Stein about his daughter.  Stein tells Jax how he created an aberration…Lily. Stein says he isn’t going to the rest of the team because he doesn’t’ want to lose his daughter.

The agents show up and Nate confronts them.  He tells them they are not wanted there. Kara interrupts and tells Agent Smith about her conversation with the President.  She told the president about the Department of Extranormal Operations that deals with aliens and how Agent Smith should be reassigned to Antarctica. Agent Smith leaves the party. 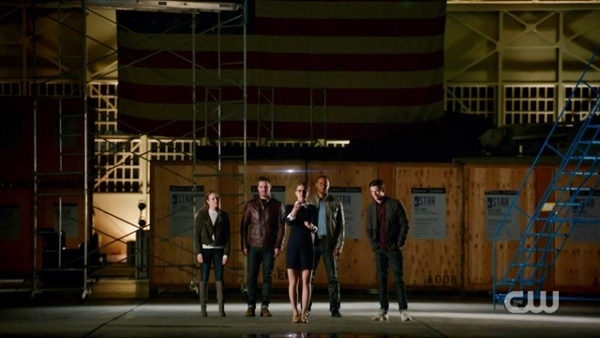 Kara uses Cisco’s device to return home.  Sara and the Legends go back to their mission.  John returns to Star City.

Oliver and Barry go for a drink before parting. They talk about how their lives are not exactly normal.  They agree that a normal life would have been happy, but not full. 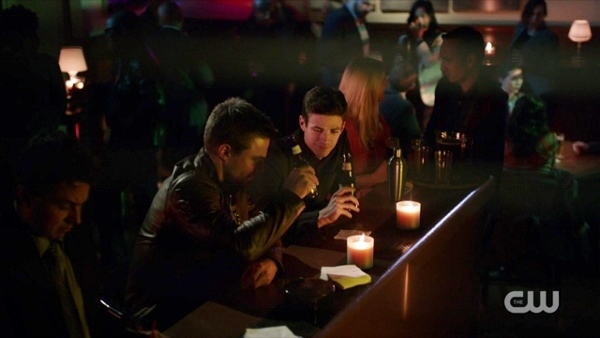 Life goes back to ‘normal’ for the Super Friends.

This was a great break from the routine storylines of each show.  I enjoyed the comradery amongst the heroes and their “techies.”  Felicity had the best time. It was like watching a superfan enter her favorite comic book.

I did like how they put a lot of focus on each of the shows for their regular night.  Incorporating Wally and HR in the Flash episode, the what if storyline of Arrow that included Laurel and the Queens and the aberration of Lily, Stein’s daughter in Legends.

The fall out of Flashpoint did affect more than just the Flash.  We know it did affect the Arrow-verse.  We didn’t get to see how it affect the Legends though.  Lily was an aberration created because of Martin’s advice to his younger self.  It would have been different if she existed after Barry recreated the Flashpoint timeline.  So that was interesting.

In all it was fun! It has its highs and lows…lots of sappy talk and lots of humor! Mick is hilarious!  Can’t wait for the next big crossover!